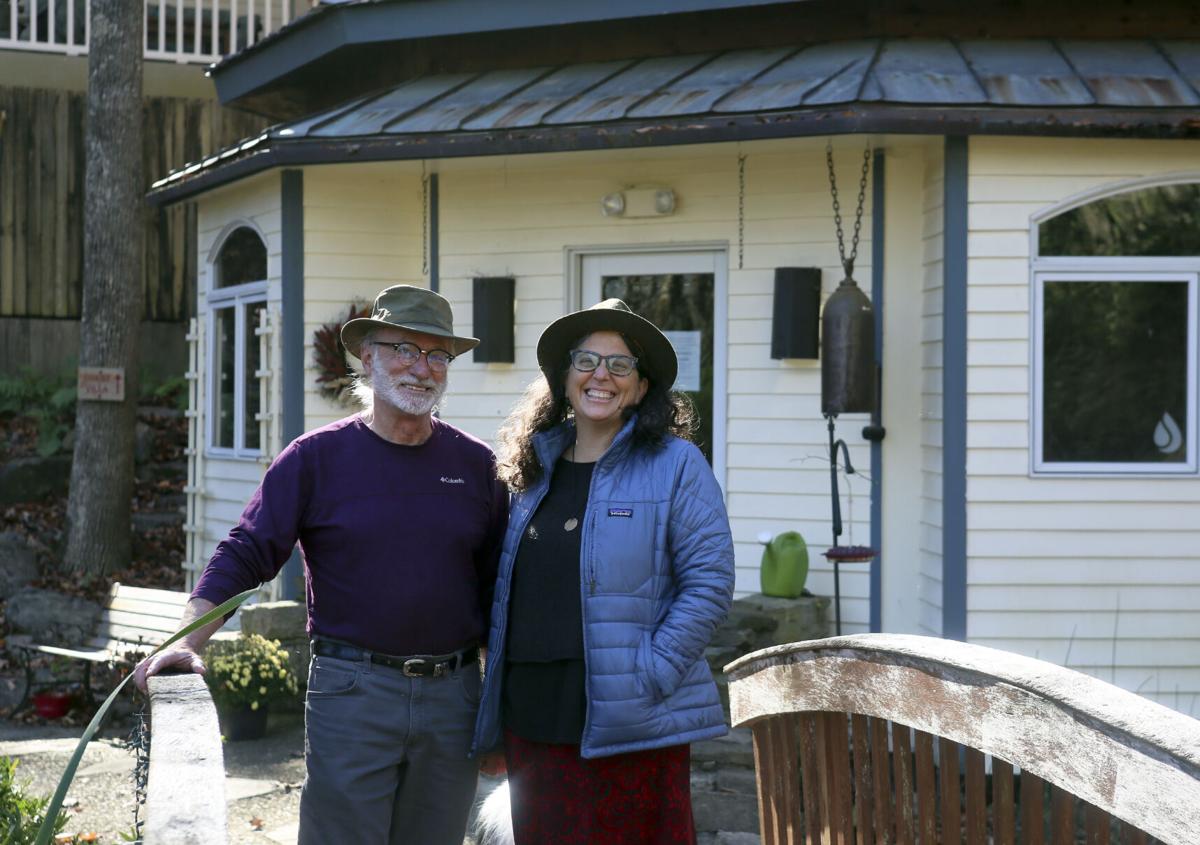 Bernard Ross and his wife Victoria Taylor bought Yellow Sulphur Springs in 1997 and are seeking new owners for the historic property in Montgomery County. 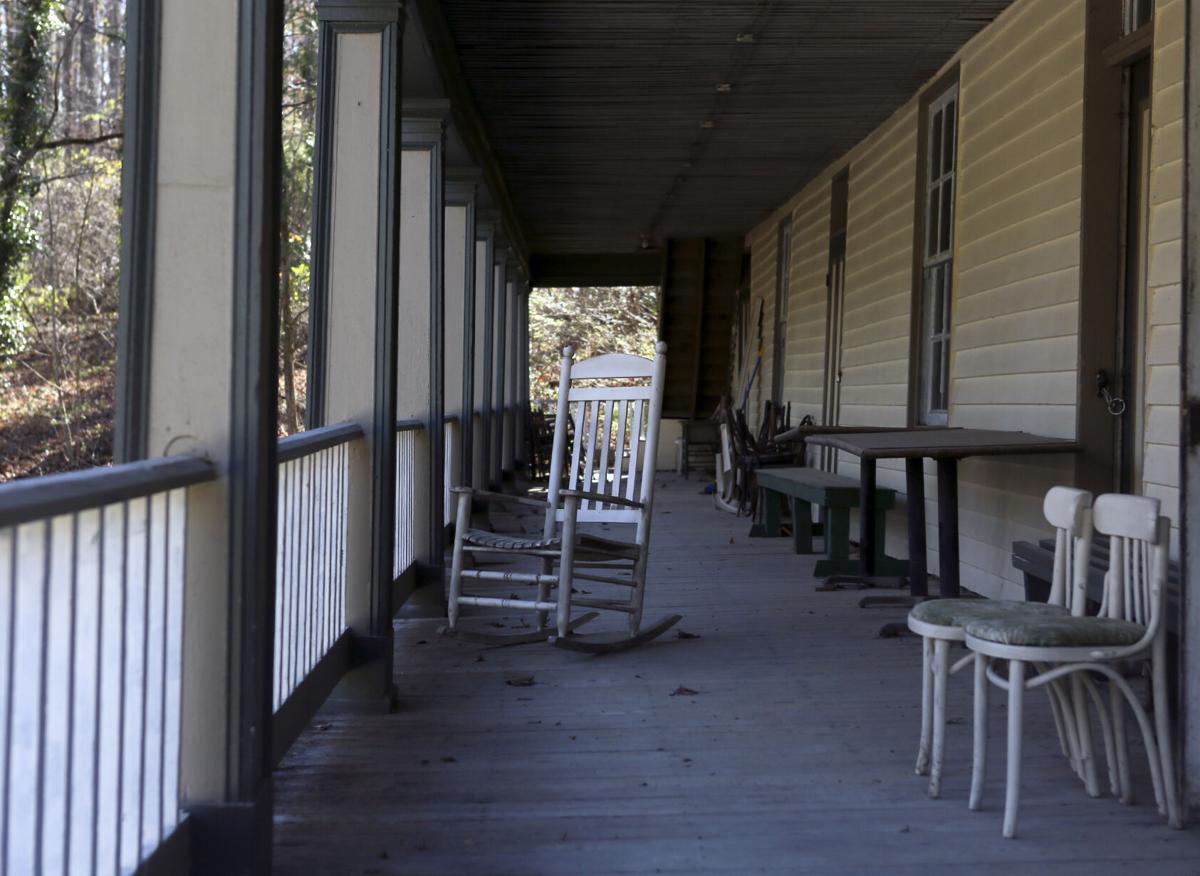 The circa 1810 Yellow Sulphur Springs hotel structure has a rich history. 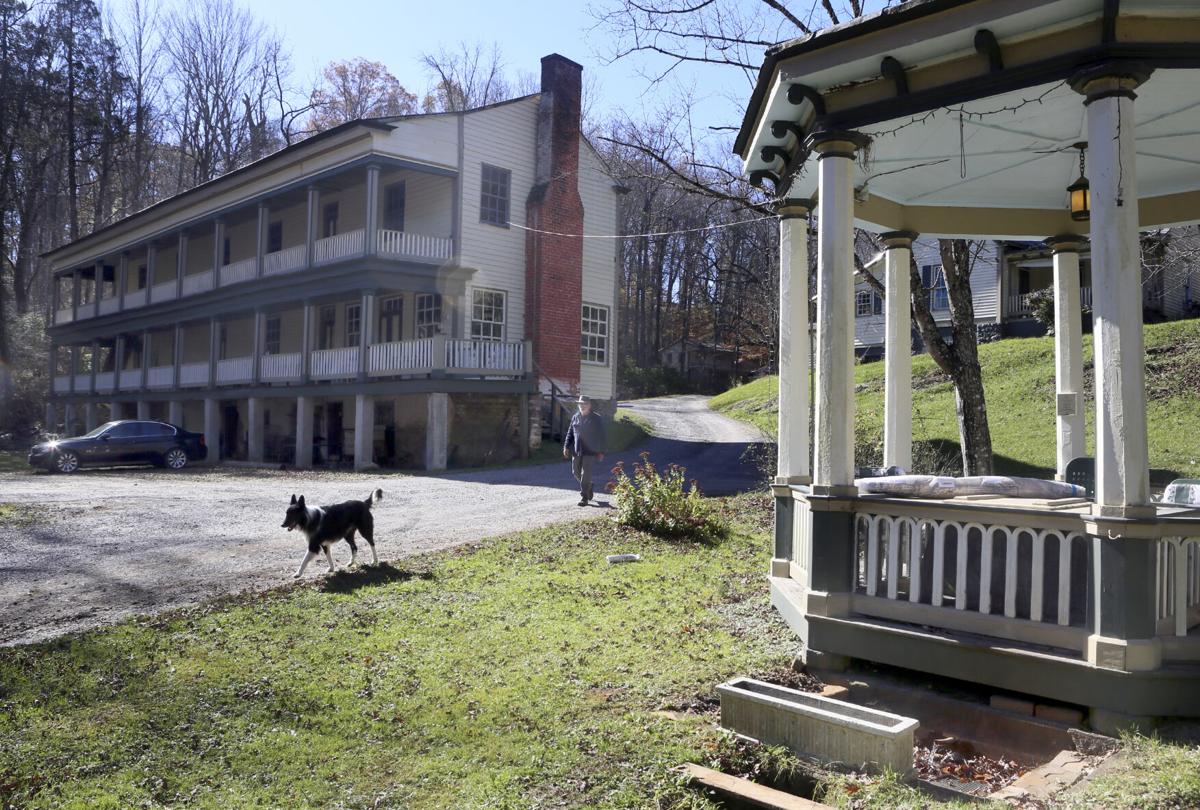 Bernard Ross and his dog Tenzin walk the historic Yellow Sulphur Springs property in Montgomery County. The spring for which the property is named comes from a pipe under the gazebo at the center of the property, right. 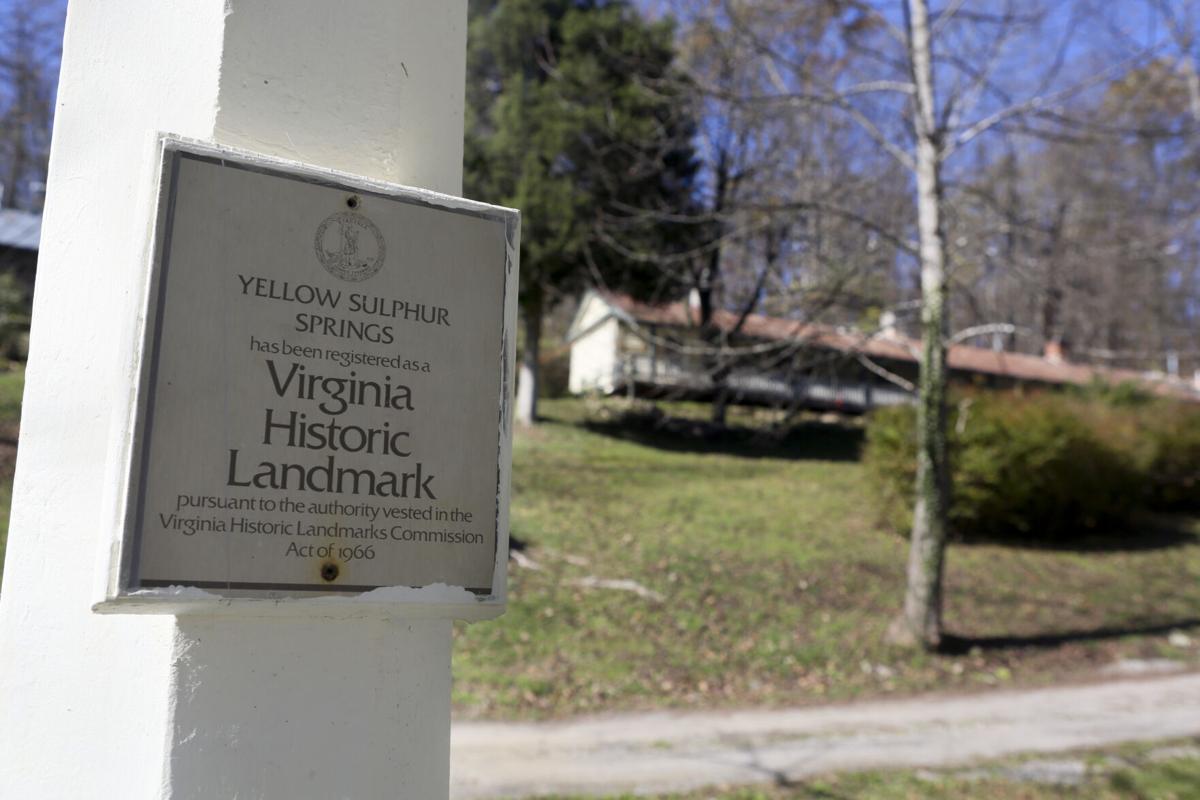 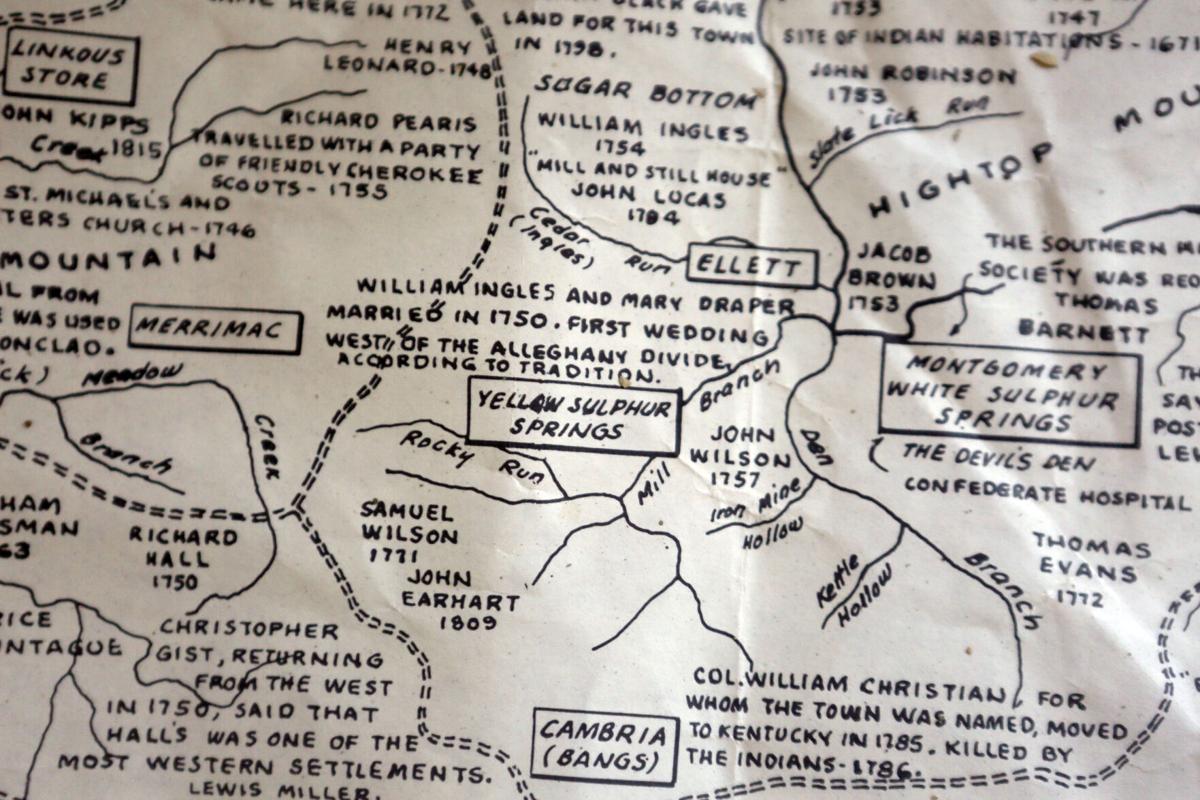 A reproduction of a historic map shows the significance of the property in Montgomery County history.

Bernard Ross looks at the collapsed remains of an old bowling alley. Dated 1870, the recreation pavilion had two lanes of bowling pins and a ball return when Ross first toured the property.

CHRISTIANSBURG — Their adventures began in 1997 when Victoria Taylor and Bernard Ross moved to Yellow Sulphur Springs. And they haven’t stopped – yet.

There were the early days when they lived in a pop-up camper while their purchase was contested, and they thought one of their children might be born without benefit of solid roof and walls (they managed to move into a remodeled 1871 cottage on the day Taylor delivered a daughter).

Then there was the Civil War-era bowling alley Ross had just managed to stabilize for renovation. That was right before a big tree fell on it.

In between there were the joys of raising three kids to adulthood and building a successful acupuncture practice among the Appalachian hardwoods.

And there is the tale of the two years and counting of trying to find a buyer, and now taking an unconventional approach to that, too.

“We had to sell the property in an adventuresome manner,” Taylor said. “That’s who we are.”

Traditional real estate agents weren’t able to help. It’s tough to sell a historical mountain hollow that has been a commercial property since about 1800 but still doesn’t have public sewer or water service.

So, they’re trying something else: offering a $100,000 finder’s fee to the person who brings them a buyer who closes the deal. They’ve posted an old West “wanted” poster to social media and sent copies to area developers, hoping to find someone who will see the potential and won’t blink too hard at the $2.5 million asking price.

But it can’t be just anyone.

“We’re selling stewardship,” Ross said. “It needs a steward that can make sure it can last for the next 100 or 200 years.”

“That weighs heavy on our hearts. This place is a jewel. It’s the ‘Oasis of Montgomery County,’” Taylor said. “We are stewards of its preservation, of its stories, of the healing properties that it’s had for hundreds and hundreds of years.”

Mineral springs follow the entire length of the Appalachians, but were concentrated in the Blue Ridge Mountains in Virginia and the Allegheny Front in West Virginia, according to historian Kathleen Curtis Wilson. First identified and valued by Woodland Indian peoples, these springs became destinations for European settlers beginning in the 1700s.

History records an assortment of spa resorts, hotel complexes and cabins built around approximately 75 mineral springs across the region, Wilson wrote in an email. The resorts ranged from small and rustic to world-renowned spas for affluent members of Southern society, and all traded on the supposed health benefits of drinking and bathing in the water – not to mention getting away from the heat and diseases that ravaged cities in summer.

Before and after the Civil War, well-heeled vacationers traveled from one spring to another with their families and servants in tow to enjoy elaborate parties and other entertainments; it became known as the Springs Circuit, according to Wilson. Its popularity peaked in the mid-1800s, but some of its grander spas, such as the Greenbrier and the Omni Homestead remain destinations today.

Originally opened circa 1800 by Charles Taylor, Yellow Sulphur was known then as Taylor’s Springs. It expanded with the coming of the railroad and the growth of coal and did draw prominent guests such as Confederate Gen. Jubal Early, among others.

“The Yellow,” as it was dubbed, changed hands several times over its long history and survived war and disaster, but even in its heyday was no match for the larger nearby resorts, Wilson said.

“It was an early one with a classic style, but it never could compete with the White (Greenbrier) or Montgomery Springs,” she wrote in an email.

For one thing, it was small, with a maximum occupancy of 350, while larger spas could accommodate up to 1,600 guests, Wilson wrote.

But other things have set it apart.

During the 1920s, this rural idyll that once hosted the cream of white Southern society became a destination for African American families looking for entertainment and recreation during Jim Crow segregation.

In 1926, a group of 10 Black businessmen with ties to Roanoke and its booming economy bought the resort and advertised widely, drawing visitors from as far away as Tidewater, according to the Virginia Department of Historic Resources. At the time, it was considered the largest hotel owned and operated by Black Americans anywhere in the United States.

But the success was short-lived. The business folded in 1929 as the U.S. economy slid toward depression.

Sherry Wyatt, curator at the Montgomery Museum of Art & History in Christiansburg, said there is some evidence to suggest that the resort was then used by the Civilian Conservation Corps in the 1930s.

And, when it was placed on the National Register of Historic Places in 1979, Yellow Sulphur was “one of the oldest and most extensive complexes of early resort buildings remaining in Virginia,” according to VDHR records.

Ross and Taylor have over the years constructed new buildings, including a cabin they rent for short-term stays and a healing arts building where Taylor practices acupuncture and massage. Their home on the hill overlooking the property was built in the early 2000s, but it was designed by a historical architect to be much as a 19th century home would have been.

Taylor said that translates as: “It has one bathroom.”

The good news is they replaced the gas lighting system with electricity, among other modern upgrades.

Ross said the 54-acre property is zoned for planned residential development with room for about 30 new housing units.

Even towing operators are telling Roanoke County's elected leaders that the county's current system of calling towing companies from a rotation when police need their services is not working.

The new program, which meets weekly, is coordinated by Cherie Dunford, a Pembroke chaplain who’s been training over the past year to become a facilitator and organizer with Living Free, a national faith-based nonprofit.

Lame duck's pardoned turkeys will not be Hokie-bound

Since 2016, turkeys pardoned by the U.S. president for Thanksgiving have gone home to roost at Virginia Tech’s Blacksburg campus. This year is different.

On Nov. 1, the seven-day moving average in Virginia for hospital patients with the virus was just above 1,000. By mid-month it has climbed to 1,250, and within 10 days it stood at 1,516. That was Wednesday, Thanksgiving Eve, the day when all across the state and country people ignored public health warnings and traveled to spend the holiday with families.

The series of events included an argument, a car trip to Botetourt County, a report of shots fired and then two car wrecks in quick succession.

Victim identified in fatal shooting in Roanoke; no charges filed yet

Police have identified a man found with fatal a gunshot wound Monday night in a home on Centre Avenue in northwest Roanoke.

Bernard Ross and his wife Victoria Taylor bought Yellow Sulphur Springs in 1997 and are seeking new owners for the historic property in Montgomery County.

The circa 1810 Yellow Sulphur Springs hotel structure has a rich history.

Bernard Ross and his dog Tenzin walk the historic Yellow Sulphur Springs property in Montgomery County. The spring for which the property is named comes from a pipe under the gazebo at the center of the property, right.

A reproduction of a historic map shows the significance of the property in Montgomery County history.

Bernard Ross looks at the collapsed remains of an old bowling alley. Dated 1870, the recreation pavilion had two lanes of bowling pins and a ball return when Ross first toured the property.