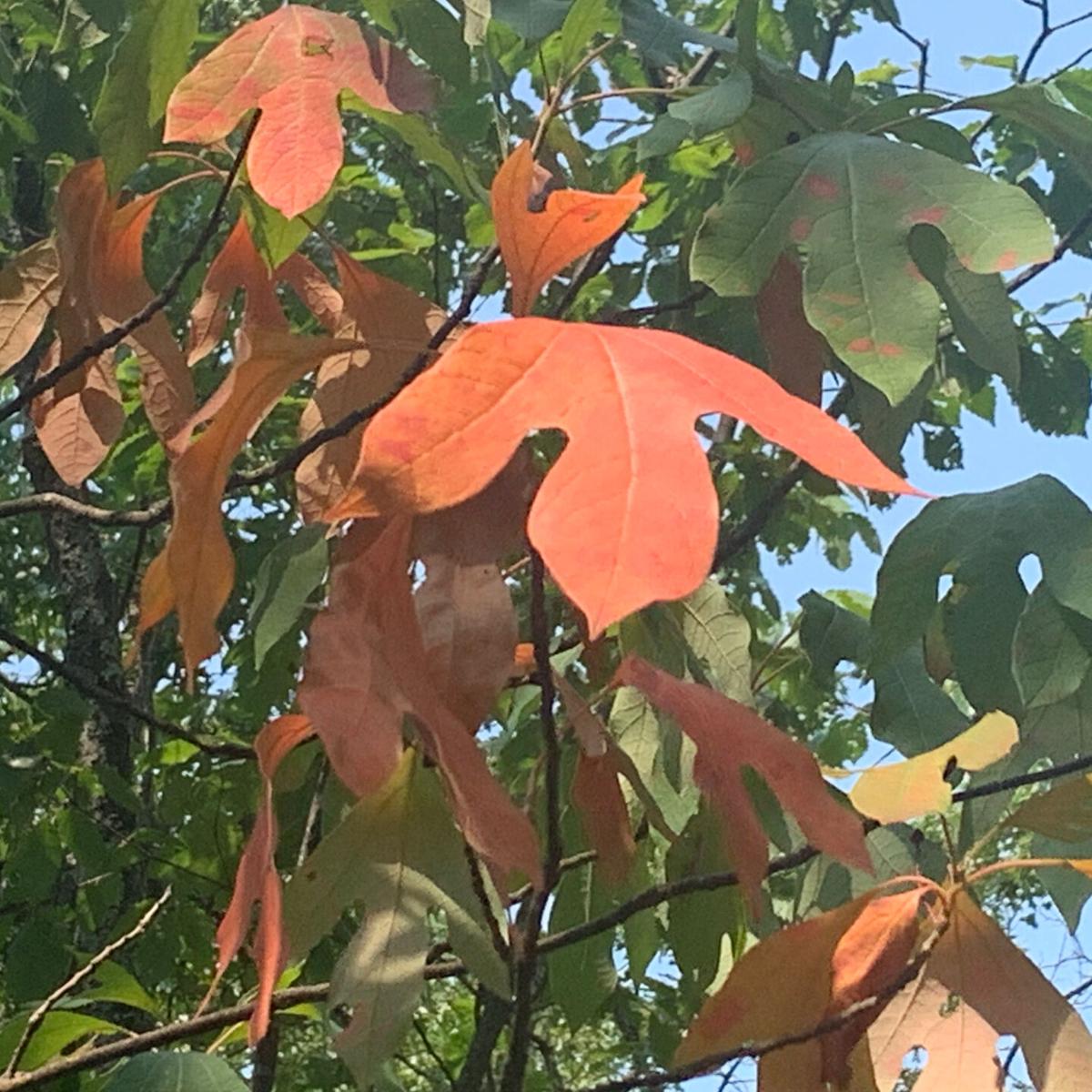 Sassafras leaves already turning orange on Sept. 13 along a Botetourt County hiking trail near the Blue Ridge Parkway. Some late summer foliage turning is more the result of dryness and disease than seasonal changes, but that process will be jump-started soon with cooler mornings and continued shorter days. 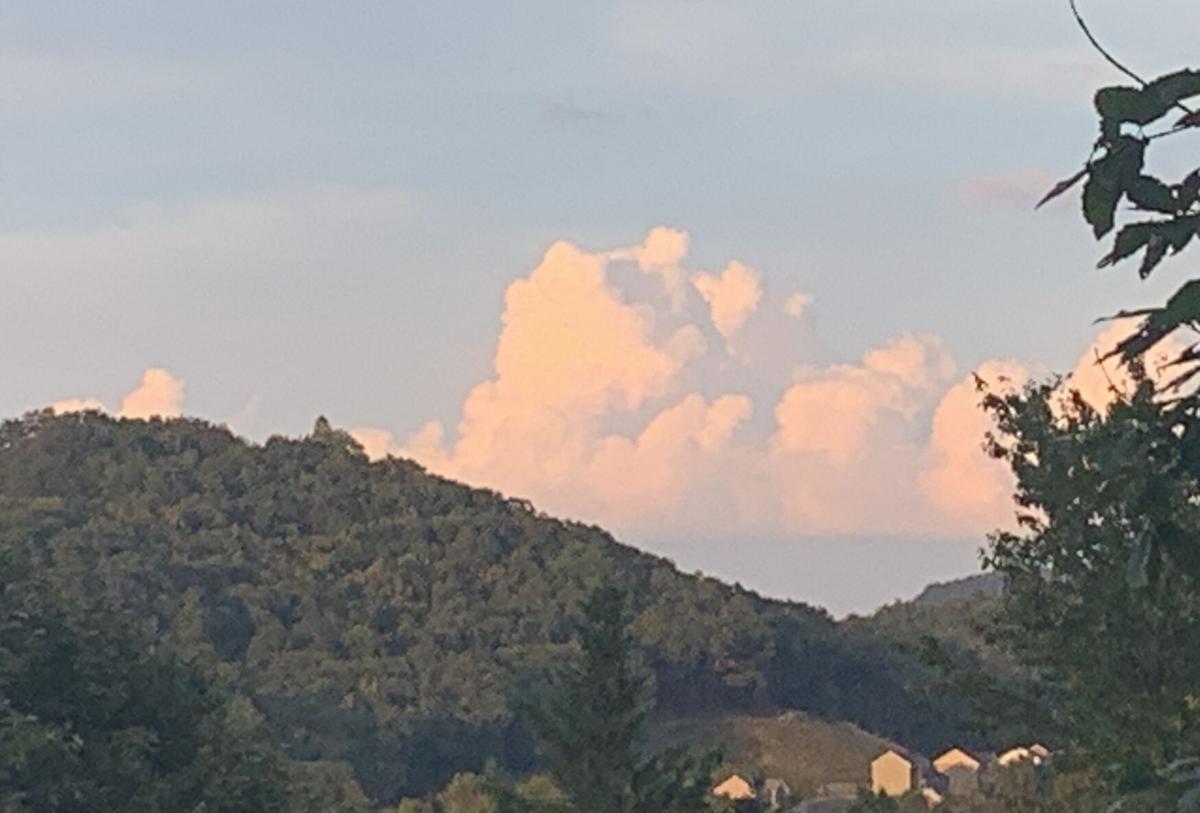 Evening sunshine lights up towering cumulus clouds over southern Roanoke County on Sunday. Bubbling cumulus clouds, a common sight in summer, will be seen with less frequency as the seasons shift and the temperatures turn cooler.

Most seasons arrive meekly. Autumn 2021 is roaring in loud

A vigorous upper-level low, a strong Canadian cold front, upslope flow against the mountains and remnant moisture from what was once Hurricane Nicholas are converging for a rainy, breezy, possibly stormy passage from summer to autumn, as the autumnal equinox makes the calendar turn official at 3:20 p.m. Wednesday.

A flash flood watch continues until midday Wednesday, and there is at least some risk of locally strong to severe thunderstorms in the afternoon and evening with turning winds aloft, although instability will be limited.

The shift of air masses will be stark.

The stickiness of late summer that hung on through this past weekend will be replaced by crisp mornings in the 40s on Friday and Saturday with low-humidity high temperatures in the 60s and 70s.

There will be no question that fall has arrived. (It’s been fall on the meteorological calendar for three weeks already, since the start of September.)

The broad atmospheric pattern, with high pressure across western North America and dipping jet stream trough in the East, suggests near normal to somewhat below normal early fall temperatures will have staying power with a couple of reinforcing shots of cooler air through the end of the month and into early October.

We may flirt with frost in outlying areas if a clear, calm especially cool morning develops behind a cold front in the next couple of weeks.

Most years that have 90s in late September or October are the result of a summer weather pattern that never fully lets go. We’re getting a clean break from summer with this week’s sweeping cold front.

One possible fly in the ointment for what looks like a fairly long period of cool to mild temperature and many dry days, wonderful for outdoor activities, is that depending on exactly how the trough sets up in eastern U.S., it is possible a tropical system could get pulled northward into the eastern Gulf of Mexico or along the Eastern Seaboard during this period.

The tropical Atlantic already has reached its R name and appears likely to go through the alphabetical list into the supplementary list for a second straight year — now a new list of names, not Greek letters as in the past.

Hurricane Nicholas made landfall more than a week ago in Texas, but yet, we’ve been dealing with some of its leftover moisture with the current rainfall. That would make Nicholas the 11th named tropical system in two years, and fourth this year, to have a direct effect on our region.

As has been expressed here times before, autumn is largely about the push and pull between the tundra and the tropics.

Cooler air sweeping down from the tundra across the central and eastern U.S. is putting an end to summer stickiness, but the tropical Atlantic may yet inject a round or two more of its own brand of stickiness as autumn continues.

We are making the transition from sweating to sweaters pretty dramatically this week, but there may yet be some twists and turns before we starting needing coats.

Another heavy rain band by Wednesday PM; possibly some windy storms too

After widespread overnight rain of 2-6 inches in and around the Roanoke and New River valleys, there will be more showery rain during the day …

Sassafras leaves already turning orange on Sept. 13 along a Botetourt County hiking trail near the Blue Ridge Parkway. Some late summer foliage turning is more the result of dryness and disease than seasonal changes, but that process will be jump-started soon with cooler mornings and continued shorter days.

Evening sunshine lights up towering cumulus clouds over southern Roanoke County on Sunday. Bubbling cumulus clouds, a common sight in summer, will be seen with less frequency as the seasons shift and the temperatures turn cooler.