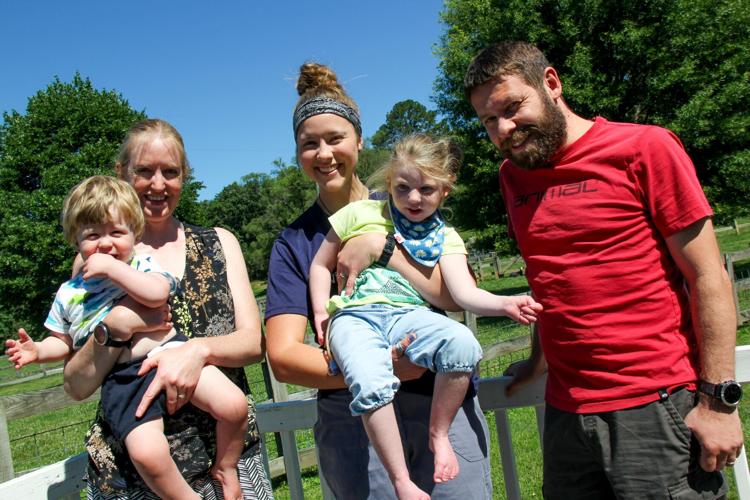 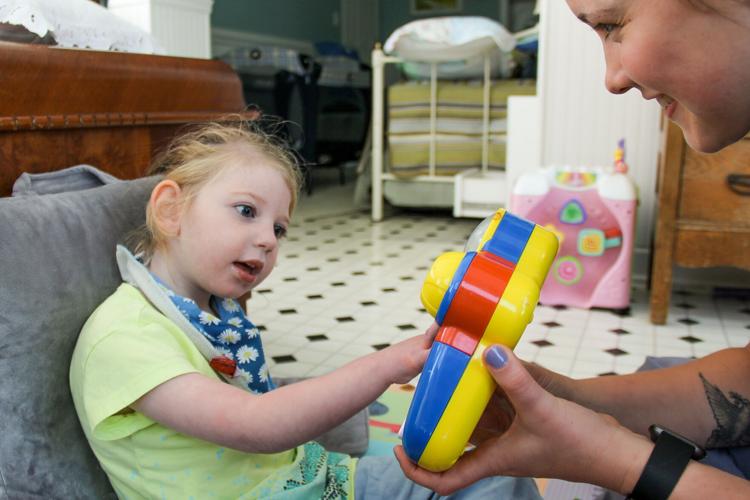 With help again from family and friends, plus a forming foundation, the Hattersley family’s resolution in 2022 is to further support 3-year-old Sarah, and the specialists studying CASK gene mutation on behalf of children like her, said mother Laura Hattersley.

Mutation of the human body’s CASK gene is known to affect fewer than 100 people worldwide, resulting in severe developmental difficulties.

Sarah Hattersley in June received four weeks of intensive therapy from the Fralin Biomedical Research Institute’s Neuromotor Research Clinic at VTC, enabling her to move and respond like never before, just in time for school to begin, her mother said during a video call Tuesday.

“She’s been off school most of this half term, like half of the autumn. But when she is well, she’s so much better than she was,” Laura Hattersley said of her daughter. “She’s still a lot stronger.”

After all the conundrum navigating international travel restrictions to and from the United States this summer, little Sarah and her toddler brother Felix came home and caught the coronavirus, from which they are recovered, Laura Hattersley said.

“Sadly, we’ve not been able to work on all the therapy as much as we really had hoped,” Hattersley said. “Partly because of school, and her little brother is now in a nursery. They keep getting ill.”

But the plan is to plow on into next spring, practicing the same therapeutic techniques Sarah learned this summer in Roanoke, Hattersley said. Sarah can sit up unsupported now for short spells while mum reads beloved books, showing further improvement of strength and balance.

“We still have some funds left from our fundraiser, so we’ve organized another intensive therapy, but this time in Europe. That’ll just be for two weeks,” Hattersley said. “It’s in Slovakia.”

Services offered at Fralin Institute are unlike anything available elsewhere for Sarah, her mother said. Roanoke is the only place the family has found a full four weeks of intensive therapy, and a lab here exclusively studies the CASK gene mutation, its underlying causes, impacts and potential for treatment.

“We have looked and looked, and there’s nothing anywhere else in the world that seems to do that kind of therapy, that understands the children so well, and will provide that much intensive,” she said.

After a June meeting with Konark Mukherjee, who since 2011 has studied the CASK gene mutation at the Fralin Institute, Hattersley said she wanted to find a way to support his team and similar scientists.

“Since meeting him and finding out that he struggles to get funding for his research because CASK gene disorders are so rare,” Hattersley said, “I was inspired to start my own UK charity, because we don’t have anything here, which is solely aimed at funding research into the CASK gene.”

Pending registration paperwork, the CASK Research Foundation will provide scientists with grants to further investigate the gene and related disorders, Hattersley said. There are foundations with a similar focus in the United States and Australia that together can create change, she said.

“It’s given me some kind of hope, and more of a purpose that I feel like I can really help Sarah, and all her little CASK friends all over the world,” Hattersley said. “It feels like we could really make a massive difference to these children’s lives.”

Studying drugs that might someday help make such a difference is Mukherjee, who said he recently received a grant from the Australia-based CASK research foundation to continue his work.

“The support, the parent groups, it’s international. People from England, from Australia and all over the world are united in this common mission, which is really encouraging,” Mukherjee said. “I’m really thankful to them… This basically gives me a sense of purpose, why I have to get there.”

He said he is often asked why he studies such a rare disorder.

“The biggest criticism that we have is we are dealing with something which is very rare, which does not affect a lot of people,” Mukherjee said. “But we really think that this principle in general is applicable to a large number of pediatric disorders which give rise to developmental delays, including Down syndrome, Rett syndrome, even fetal alcohol syndrome.”

There are a few drugs Mukherjee and his team are testing, and they hope to know within the coming months whether the substances are useful.

“To what extent can we reverse or even prevent degeneration?” Mukherjee said. “We think what we find here might have applications in conditions that we still have not yet physically studied.”

Even so, there is a long way to go in unraveling the mystery of CASK gene mutations, first described in medical literature relatively recently, in 2008.

“We are trying our best to find out something. But even when we find something in animal models, it takes time to actually realize any real potential,” Mukherjee said. “Science still remains a slow process.”

Pakistan FM: A new engagement with US has started

Pakistan FM: A new engagement with US has started