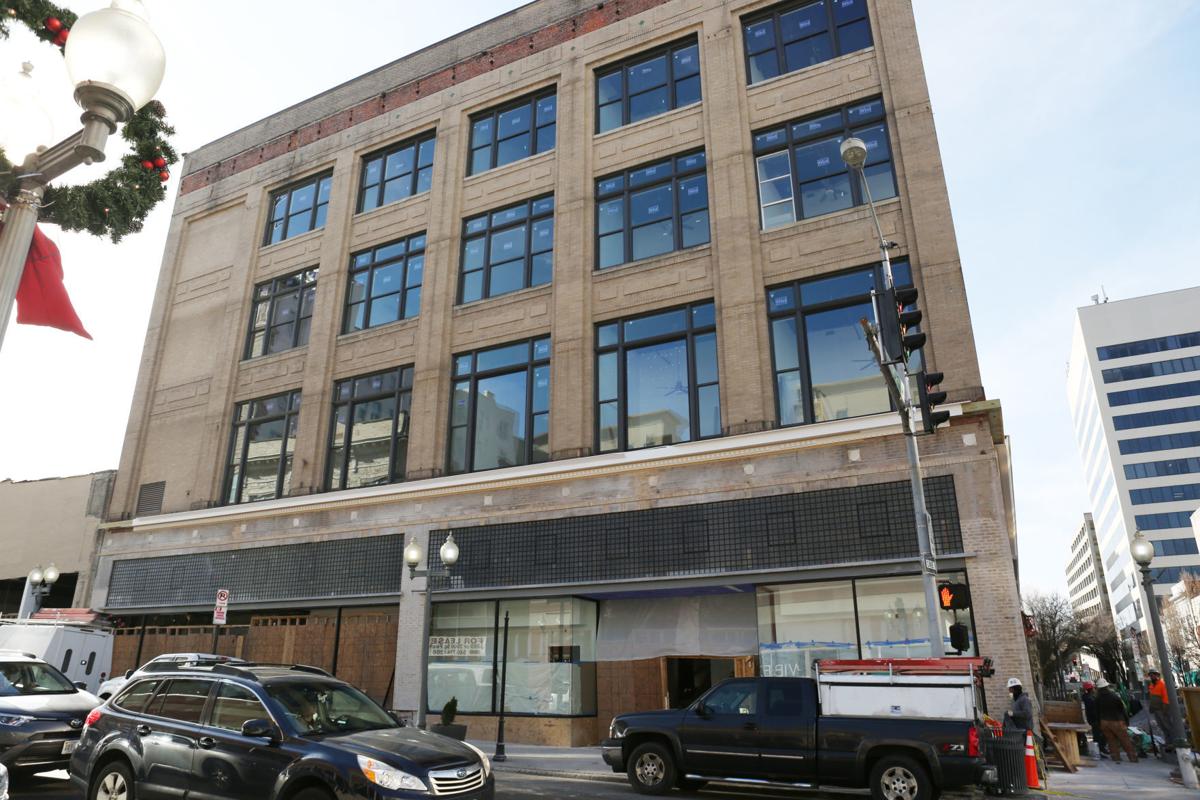 After being vacant since 2005, the Heironimus building on Jefferson Street in Roanoke is being converted into residential and retail space. The developers hope to begin leasing the 77 units early next year. 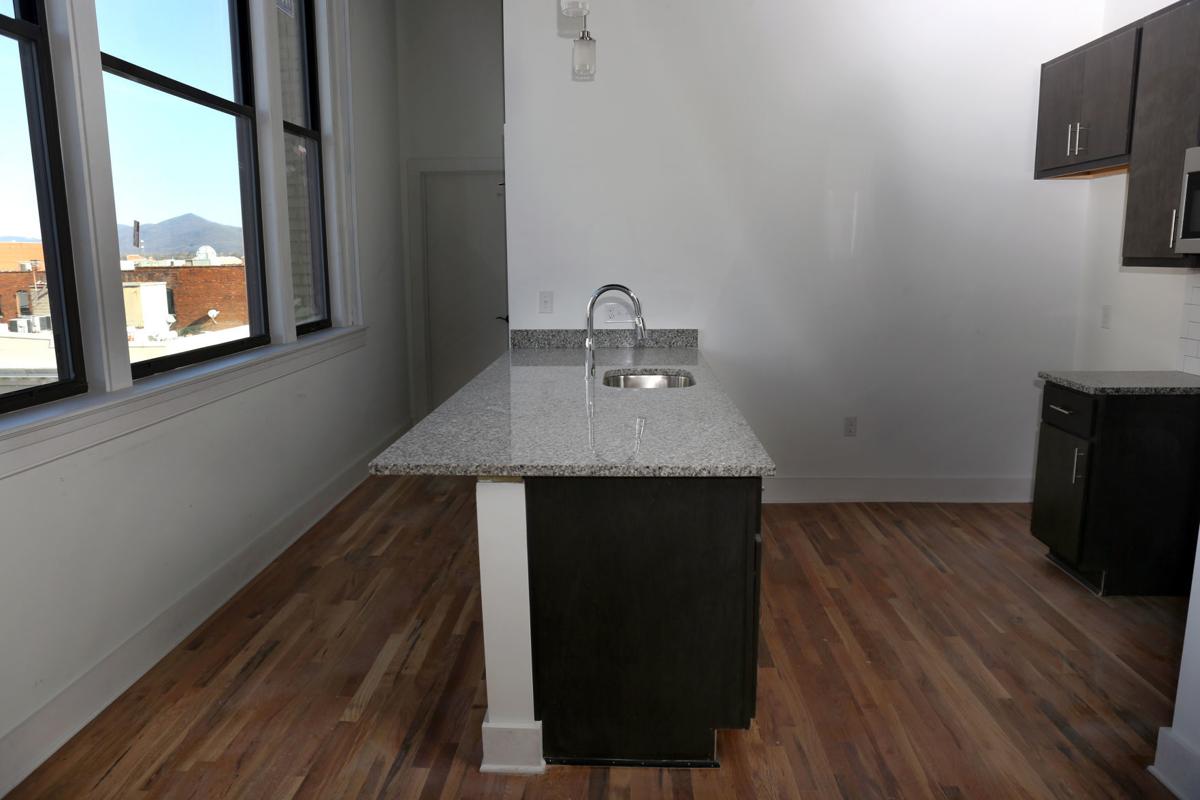 A one-bedroom apartment overlooks downtown Roanoke and mountains from the Heironimus building, which is being converted into residential and retail space. The bulk of renovations are complete but work is still underway.

The long dormant building that was once the flagship Heironimus department store has been bustling with construction this year as Richmond-based developers plan to bring apartments and retail to one of the last large unused properties in downtown Roanoke.

The Monument Companies purchased the property at 401 S. Jefferson St. in 2018. And in January, Mast General Store announced it would open a location in the building.

The North Carolina-based retailer is designed to call to mind the country general stores of old and carries a variety of items from outdoor gear to home goods, food and toys.

Developers Chris Johnson and Tom Dickey, principals with The Monument Companies, updated The Roanoke Times on the multimillion dollar renovation project’s progress. They said the bulk of the work on both the apartments and the Mast General space is expected to be complete by year’s end, with finishing touches carrying on into 2020.

In the Mast General space, that will involve the retailer coming in and adding shelving, sales counters and display cases. Some of that work has already begun on the mezzanine, Dickey said. He noted Mast will be on three levels of the building — the basement will be used for storage while the first floor and mezzanine will be retail space.

Mast stores have a distinct look, which Dickey said the developers kept in mind during the buildout of the space. He said the Roanoke store will fit the Mast mold and identity.

“I think it’s going to be really great. It’s going to act as a real hub for downtown,” Dickey said, noting he expects it to serve as an anchor store, similar to the concept of department stores in shopping malls.

The renovation involved an overhaul of the entire storefront for the Mast General space, Dickey said, but the downtown landmark still will be recognizable.

Sheri Moretz, with Mast General Store, said the Roanoke location is expected to open in summer 2020. She said the company wants to pay tribute to the building’s history.

“We’re trying to figure out exactly how to tell the story of this great building that’s been a part of Roanoke since the early 1900s and to recapture the building’s heyday,” Moretz said.

She encouraged anyone with stories about the Heironimus building to tell them to Mast General Store.

The building was constructed in 1905 as a furniture store. In 1915 the Heironimus department store moved into part of the space and later expanded. It occupied the building until 1996. The Emporium, a collection of shops, opened in 1997 and closed in 2005. The building has been vacant ever since.

In addition to the Mast General Store, the redevelopment project will result in two other commercial spaces — one at 3,400 square feet and the other at 1,300 square feet, Johnson said. John Nielsen of Cushman & Wakefield | Thalhimer is handling the leasing of those spaces.

Johnson said they’ve already generated some interest and he expects the spaces to be leased in the first quarter of 2020.

The developers are open to various kinds of tenants, Johnson said, but he thinks a restaurant would be a good fit for the larger space. Whether it’s a creative office, brewery or some type of retail, Johnson said, they’re looking for “something that will benefit the community and benefit the project.”

On the residential side, Johnson said, the company will begin leasing the apartments in January, with a target occupancy date of March 1.

The building will have 77 apartments — 55 one-bedroom units and 22 two-bedroom units, he said. Amenities will include an outdoor pool, fitness facility and a roof deck common space.

On the upper levels of the residential space, large windows offer sweeping views of downtown Roanoke and the mountains. Three penthouse units on the top floor have their own private decks.

All told, 2019 was a transformative year for the Heironimus building.

“It’s turning out pretty much like we had anticipated, which is exciting,” Johnson said.

Photos: Inside the rebirth of the former Heironimus building in downtown Roanoke

More developments taking shape around the core of downtown Roanoke

When Corned Beef and Co. moved out of the Roanoke City Market Building to a site a block away on Jefferson Street in the early 1990s, some que…

Heironimus building in downtown Roanoke to be sold and redeveloped

As many aging properties in downtown Roanoke have been renovated and revived over the past decade, the Heironimus building has sat empty.

After being vacant since 2005, the Heironimus building on Jefferson Street in Roanoke is being converted into residential and retail space. The developers hope to begin leasing the 77 units early next year.

A one-bedroom apartment overlooks downtown Roanoke and mountains from the Heironimus building, which is being converted into residential and retail space. The bulk of renovations are complete but work is still underway. 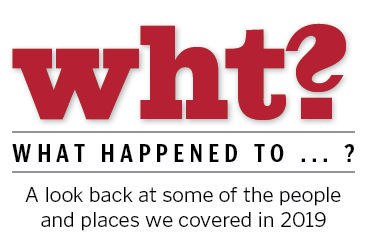