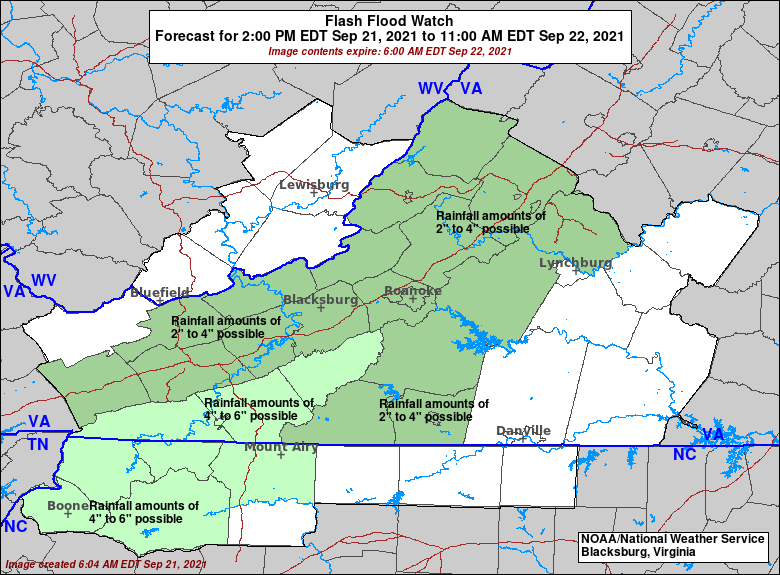 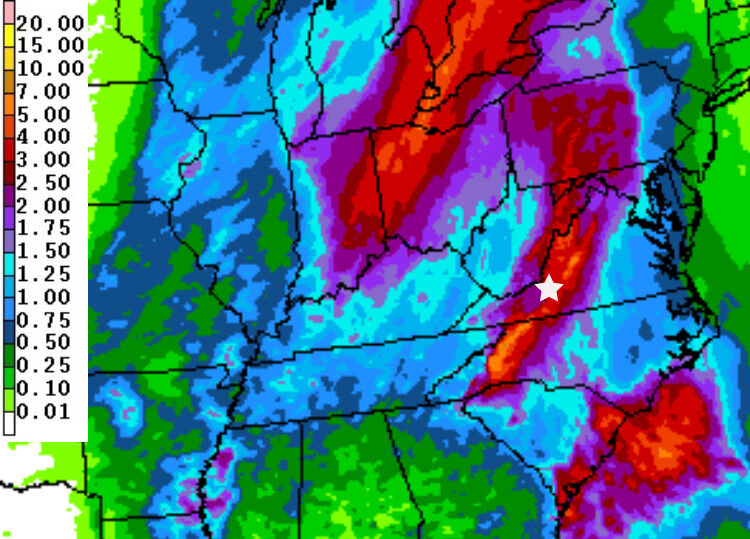 Rainfall of 1-3 inches is likely through Wednesday across western Virginia.

UPDATE 8:30 AM, 9/21/2021: A flash flood watch has been issued for much of western Virginia from 2 p.m. Tuesday through 11 a.m. Wednesday, when the heaviest rainfall is expected to occur. Widespread amounts of 2 to 4 inches are expected in the watch, with 4 to 6 inches in a zone along the Blue Ridge south of Roanoke.  Showers are already numerous across the region, expected to increase in coverage and intensity through the afternoon and evening into Wednesday morning. Rain will taper to showers late Wednesday and end by Thursday morning, with much cooler, drier weather on tap into thew weekend. END UPDATE

The most widespread, and for many locations, heaviest rainfall in months appears likely through Wednesday across much of western Virginia, as a combination of seasonal factors intersect.

A strong upper-level low with associated cold front is digging into the central and eastern U.S., providing abundant lift, and also turning wind flow around to the southeast, sweeping in plentiful moisture off the Atlantic against the Appalachians. The upslope flow against the mountains will lift and condense this moisture, enhancing rainfall that would occur anyway with the atmospheric factors.

Also, moisture once associated with Hurricane Nicholas -- remember that? It made Texas landfall a week ago -- is also being pulled northward across our region.

The result thus far has been spotty showers and some drizzle, but in time over the next 24-36, showers and bands of rain will increase in coverage and intensity. Thunderstorms may also be possible, especially on Wednesday, as the shear and lift of the upper low and cold front become more involved.

Widespread rainfall totals of 1-3 inches are likely with some amounts exceeding 4 inches especially along the Blue Ridge both north and south of Roanoke. We are still a bit dry overall for the season going into this rain, and most of it will be light to moderate, but some flooding issues could still develop by Wednesday where repeated heavy rainfall occurs.

This rain appears likely to make a broader sweep than the showery bands of the remnants of both Tropical Storm Fred and Hurricane Ida last month through the first day of this month.

The strong upper-level low approaching will be strong winds aloft that could give some storm cells a spin, or translate gusty winds to the surface, on Wednesday, though instability will be sorely lacking with two days of all-day cloud cover and temperatures stuck in the 60s and lower 70s. So a marginal risk of severe storms may develop, but a widespread severe outbreak does not appear likely.

Once the front pushes through late Wednesday, clear, cool weather will settle in for the latter half of the week as autumn begins on the calendar.

Rainfall of 1-3 inches is likely through Wednesday across western Virginia.