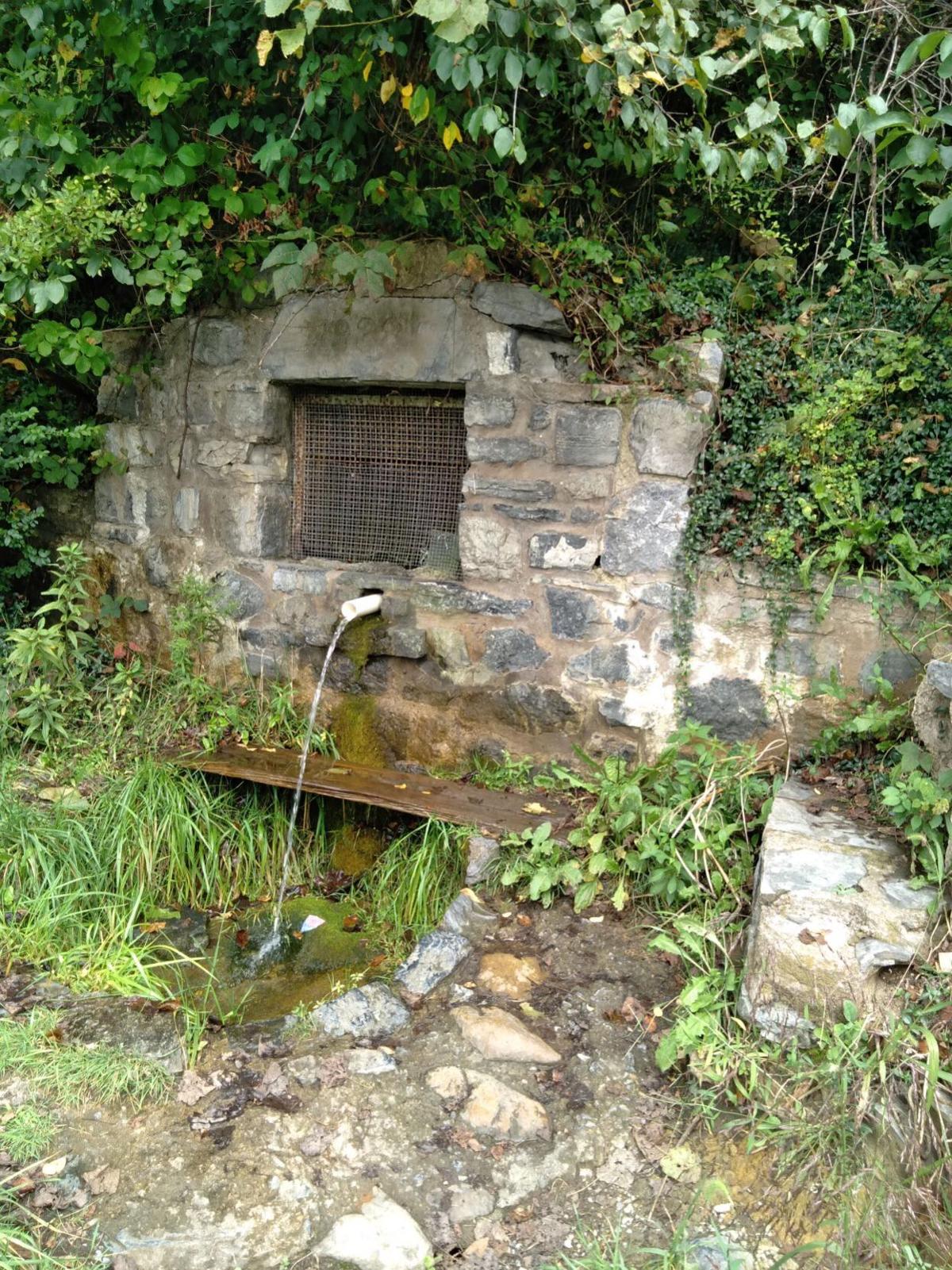 The pipe has changed over the years from galvanized to PVC, but the spring water has not stopped flowing from the natural spring beside U.S. 460 in Villamont in Bedford County. 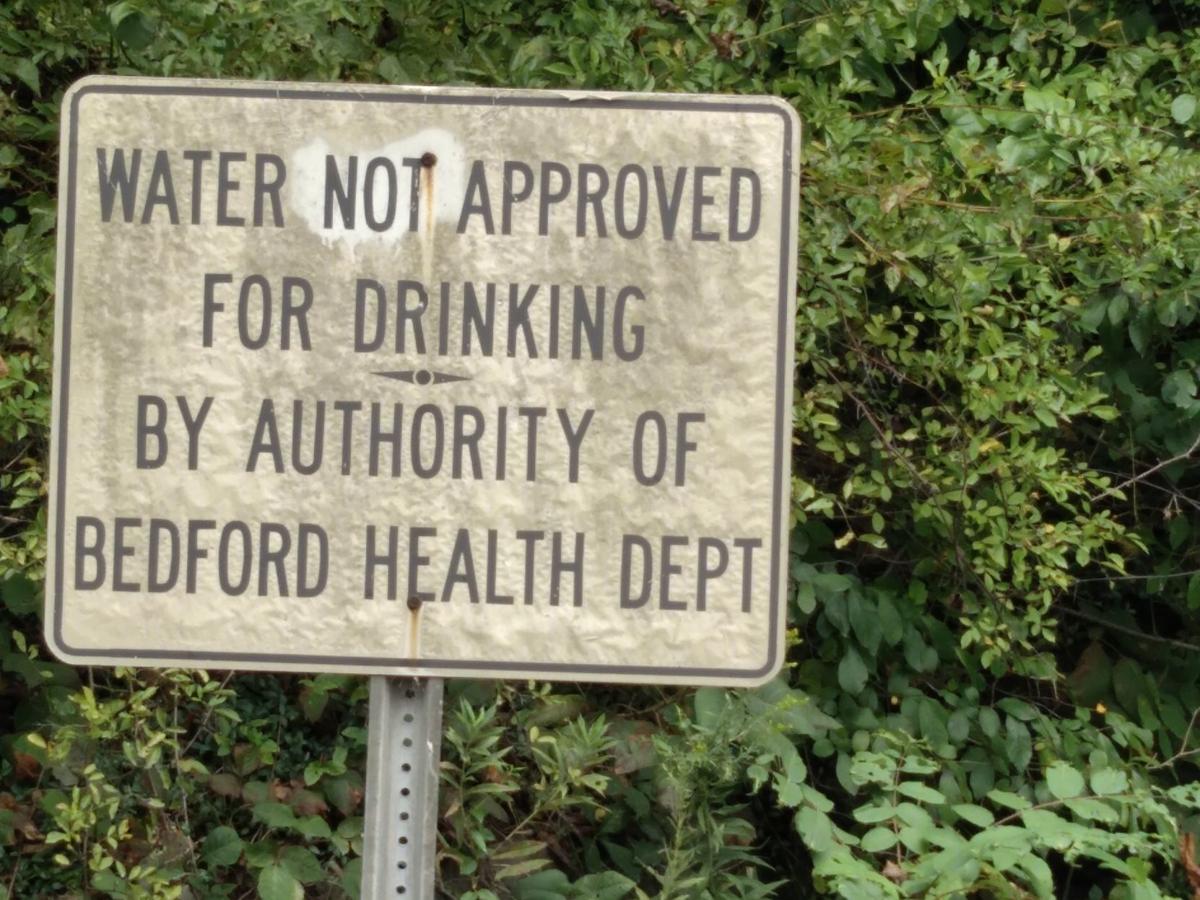 The all-capitalized sign warning against drinking untreated spring water may be why fewer people stop these days to fill containers from the spring.

The poet must never have been down U.S. 460 just east of Roanoke.

Q: There was once a spring located on the north side 460 just east of Roanoke that had been tapped with a pipe so people might stop and fill their jugs and jars with the water. Is that spring still there? Do people still stop to get water from it?

The spring is readily identifiable by the pipe that emerges from a cut stone face that was the work of a craftsman of the old school. The pipe has been swapped out from time to time, probably going from cast iron to galvanized to the current modern white PVC.

“But the numbers of them have been slowing down,” she said.

Maybe it’s the sign with the disclaimer from the Bedford County Health Department that the spring “is not approved for drinking” — in all capital letters — that puts people off. Perhaps, but the sign has been there for a good while now.

“That spring has been there as long as I can remember and I‘ve never seen it stop flowing,” said Todd Fowler, the environmental health supervisor at Bedford County Health Department. “There are numerous people who still use that water regardless of what our sign says.”

Count your faithful servant among the hydrated, although it’s been a while. The same spring also saved me a long ago towing charge when it refilled a leaking and overheated radiator.

The car and I both survived.

The county has tested the spring from time to time “with results all over the place,” Fowler said.

Spring water is considered less reliable than well water because there are more chances for the flow from a spring to be contaminated with sundry pollutants, Fowler said.

On the other hand, there are those such as the folks who maintain a database of springs at findaspring.com who swear by drinking the real deal as opposed to the bottled stuff that claims to be.

Among the sins of bottled water, these spring apologists assert, is the purification process denudes the water of “healthy microbes or probiotics.”

That’s not the half of it because “sometimes that just doesn’t taste great.”

Another community that values free-flowing water is the off-the-gridders. Numerous reference works are available to those who seek to construct a residential water system with spring water, assuming there is an accessible and reliable source to work with.

The resourceful types at locations such as maximumoffgrid.com can get you started on the road to hydrological happiness.

As an aside, the same site also discusses the use of cisterns for home water systems. That brings to mind the massive Fort Monroe at the mouth of Hampton Roads built in the wake of the War of 1812 to protect the entire Chesapeake Bay from armed intruders. The stone fortress, 63 acres in all, had as its original water supply a cistern system occasionally supplemented by water shipped in from the mainland.

You may ask who would build a 63-acre fortress at a location with no source of fresh water, but remember, this was a national security issue. In the aforementioned dustup with England, the redcoats sailed right up the Potomac and torched Washington, D.C., sending President and Mrs. James Madison fleeing for their lives.

The history of the Villamont spring is murky. According to journalist JoAnne Poindexter’s 2007 piece for the newspaper, the spring once served a business called the 5th Wheel, a truckstop and beanery lost sometime before or during the widening of U.S. 460 from two to four lanes.

The story quoted a 1932 geological publication that said that spring was part of a larger spring system in the Roanoke area, but the Villamont gusher’s “true history isn’t recorded.”

The capstone on the stonework that frames the spring reads 1938.

As previously pointed out, that stretch of Bedford, Botetourt and Roanoke counties is pretty soggy in spots. Coyner Springs is one of the many that helps keep Glade Creek cold year-round. There once were resorts built around the springs in the community of Blue Ridge.

As for four generations of my family, we were raised on spring water near Bonsack. Three houses were served by a waterwheel-based pump that pushed the water straight uphill for many feet to a metal reservoir from whence gravity fed the three residences. Mr. Cook ran the pump (there was a gate to the spillway) twice a day.

A fourth house, the one I grew up in, was served by another spring and an electric pump.

Microbes and probiotics we had aplenty. The water kept flowing. Still does.

If you’ve been wondering about something, call “What’s on Your Mind?” at 777-6476 or send an email to whatsonyourmind@roanoke.com. Don’t forget to provide your full name (and its proper spelling if by phone) and hometown.

WOYM: Reader has memory of the 'Spring Inn' that once stood in Villamont

The pipe has changed over the years from galvanized to PVC, but the spring water has not stopped flowing from the natural spring beside U.S. 460 in Villamont in Bedford County.

The all-capitalized sign warning against drinking untreated spring water may be why fewer people stop these days to fill containers from the spring.