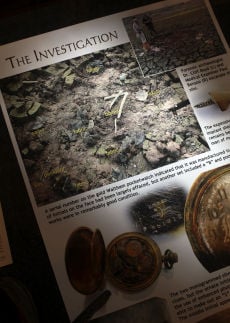 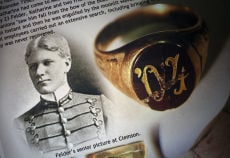 MOUNTAIN LAKE — The personal belongings that helped identify a man whose remains were found here three years ago are now on display in the resort’s hotel.

A 1904 class ring from what is now Clemson University, a silver belt buckle with an elaborate engraving and a pair of old wing-tip shoes are among the items enclosed in a 12-foot-long glass display case in the lobby of Mountain Lake Hotel.The items belonged to Samuel Ira “Si” Felder, a 37-year-old New York man who drowned at the lake while on an outing with his wife and friends on July 23, 1921.

Divers searched the lake after it was reported that Felder went overboard, but his remains were not found until 87 years later, when the lake dried up as part of its natural cycle.

Buzz Scanland, Mountain Lake Hotel’s general manager, said the display was created by the Giles County Historical Society. It will be available for people to see daily through the end of October. After that, the hotel is open only on weekends in November.

“I think the display is fantastic,” Scanland said. “I see a lot of people looking at it.”

The discovery of the items in the lake bed drew national interest and prompted amateur sleuths to try to find out who had owned them. Shortly after it was disclosed that human remains had been found, the lake saw a large influx of visitors who wanted to look for treasure in the dry bed.

Sgt. Mark Skidmore with the Giles County Sheriff’s Office is planning to do a presentation of the case, which is being called “Mystery at Mountain Lake,” at the hotel on Sept. 25.

He said Monday it will last about 20 minutes and include details about how the items were found and the work that went into identifying Felder.

Felder was Jackson’s great-uncle. She never knew him, but knew her grandfather had a brother who had drowned.Jackson loaned the items so the exhibit could be created.

“I’m happy for anyone who is interested to see them,” she said of Felder’s belongings.

She said they were displayed last fall as well during a funeral service she held for Felder in Orangeburg County, S.C.A gravestone bearing Si Felder’s name had sat next to that of his wife, Katharine, for decades in the cemetery of a small church, reading “DROWNED — BODY NEVER RECOVERED.”

Jackson had it altered to strike through the word “never” and add the date Sept. 20, 2008.

The exhibit at Mountain Lake Hotel also includes enlarged copies of newspaper articles from 1921 about the search for Felder; papers explaining parts of the discovery, the investigation and the key evidence in identifying Felder; and detailed photos of the items as they were found in the lake bed.

Neither of the women had heard about the finding of Felder’s remains but were interested in learning about him and struck by the condition of most of the items on display.

“These shoes,” Brotherton said, “that’s amazing how they stayed preserved.”

A Franklin County woman filed a lawsuit against Famous Anthony’s, alleging that she contracted hepatitis A from eating at one of the chain’s r…

A Stafford County couple in their 40s contracted the virus and died within about two weeks of each other, leaving behind five children and one grandson.