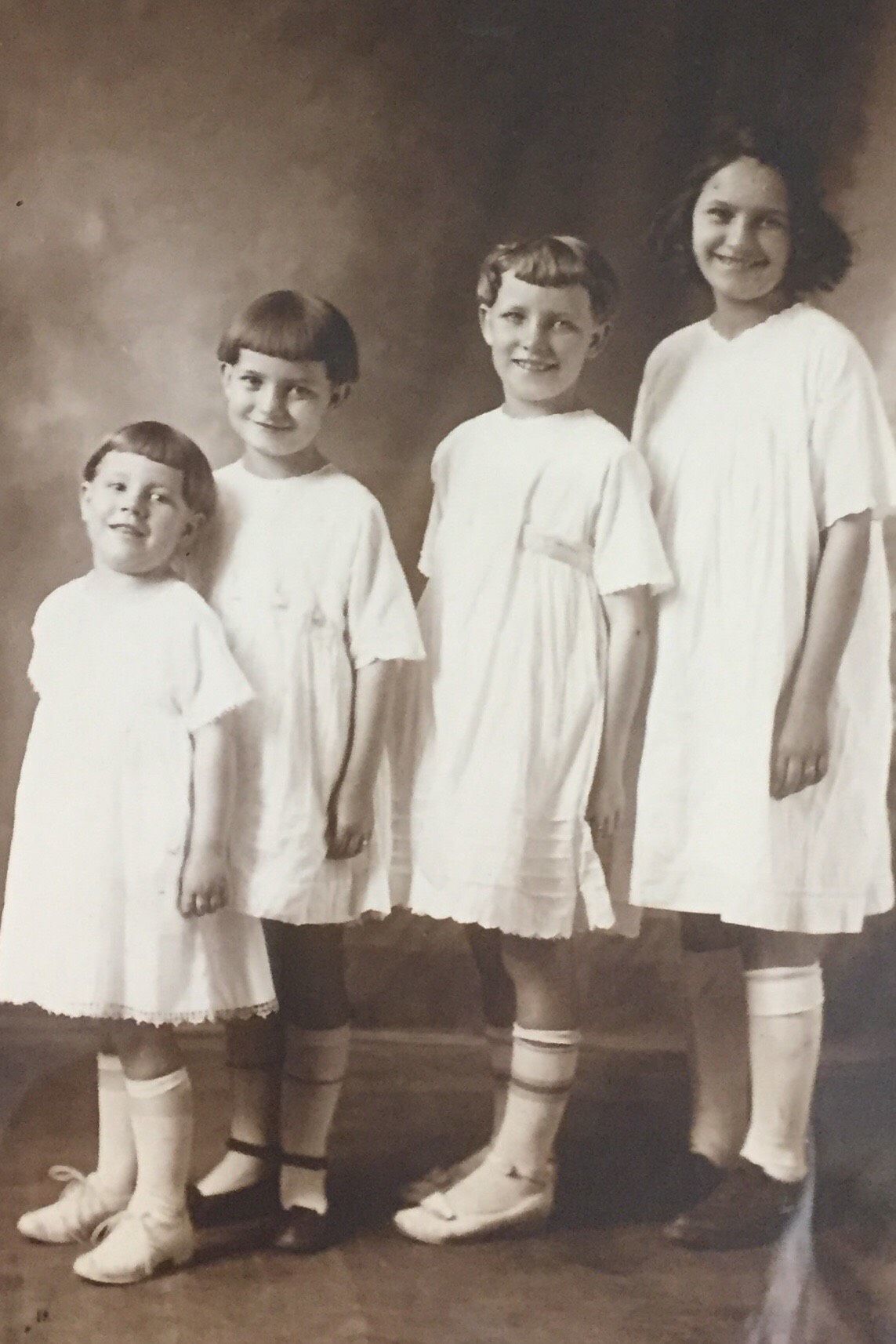 Bernadine Lester (top and above on the left) poses with her older sisters (from left) Alberta, Rena Sue and Gillie. Long lifespans run in Lester’s family, with another of her older sisters living until the age of 103, according to Lester’s daughter, Kathy Hall. 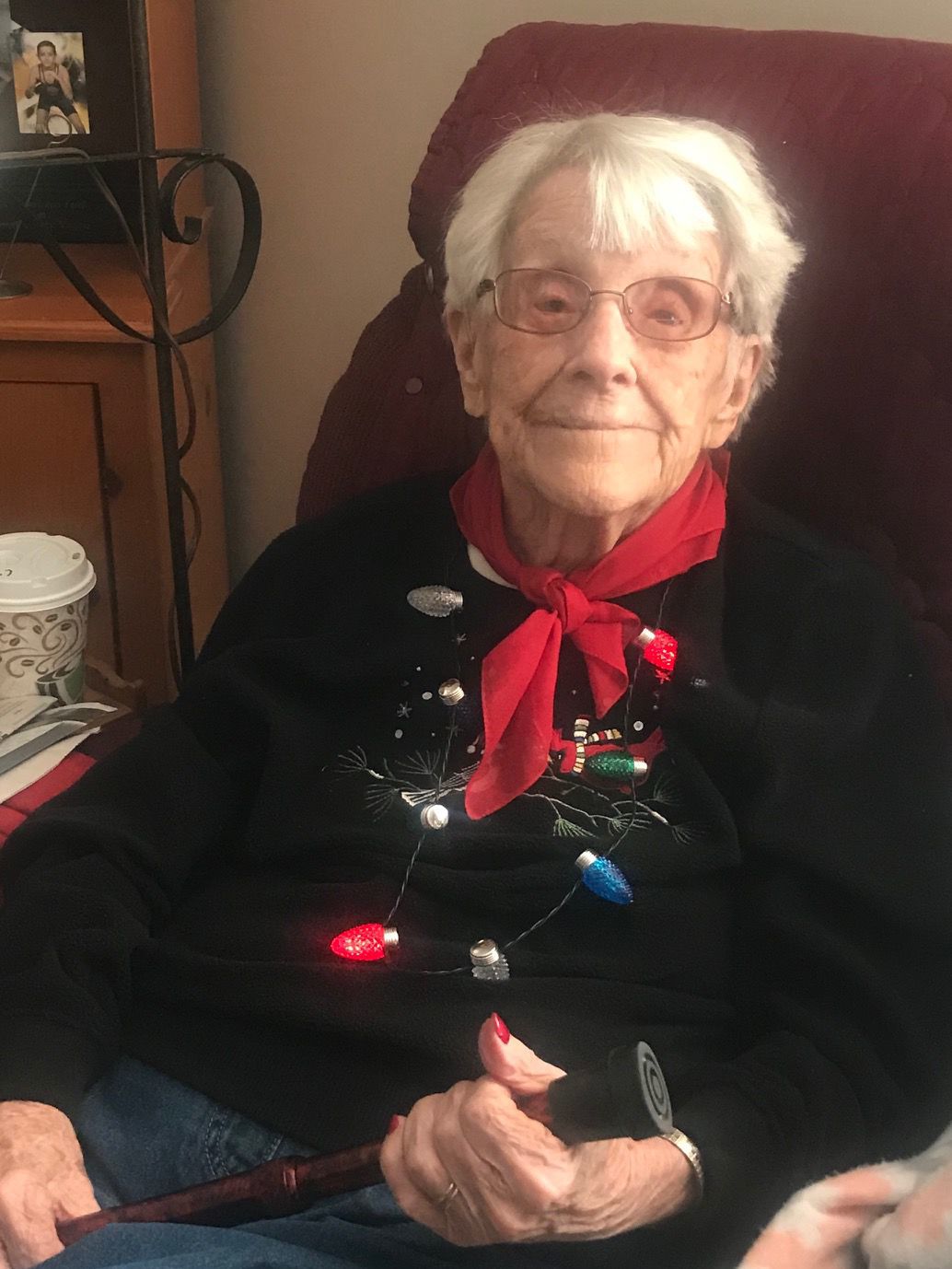 Bernadine Lester said this week that she was glad to turn 104, but could do without all the hoopla.

“The birthdays are grand things but when you’ve had so many, you get tired of them,” Lester said, leaning back in her chair and nodding so that her headpiece — two sparkly red “104”s standing up on springs — swayed back and forth.

Lester was sitting in her home, the assisted living section of Commonwealth Senior Living in Christiansburg. She spoke about her birthday via FaceTime because no visitors are allowed as a precaution against illness caused by the new coronavirus.

Lester said she had no problem with the new rules, even though it meant a recent visit with her daughter, Kathy Hall of Riner, occurred with Lester sitting indoors and Hall on a patio outside the building, a pane of glass between them. That was close enough for now, Lester said.

“As much as I enjoy talking with her, I don’t want her to get sick,” Lester said.

On Wednesday, Lester was preparing for a birthday celebration that had been planned as an in-person party but now would be held by Zoom, with family members joining from their homes across the country.

Lester was clearly in a good mood as she waited, including plenty of humor as she discussed episodes from her long life.

Fifteen years ago, Lester said, a doctor “sent me home to do the best I could with the time I had left.” She paused, then added with a shout of laughter, “It’s about to work me to death!”

Asked if there was a secret to her longevity, Lester answered, still laughing, “I’m just such a good person. … They don’t want to part with me.”

She said that a reporter should come to her party next year, adding, “You’ll have to remember it because I won’t.”

Born Bernadine Copenhaver, with no middle name, Lester lived in Pulaski until she lost her mother to the Spanish flu epidemic of 1918.

After that, she lived for a time with an aunt and uncle in Harlan, Kentucky. Lester’s uncle was a doctor and she remembered him returning home at dawn to say he’d spent the night “at a quilting party … sewing up gunshot wounds.”

“Harlan was a rough place” during her girlhood, Lester said. “But it’s settled down like the rest of the world.”

Lester returned to Virginia and graduated from Pulaski High School, then married another Pulaski graduate, the late Ray Lester. He had a career with Appalachian Power Co. promoting electric heat and later cooling, said Hall, who is one of Bernadine and Ray’s three children. The family lived in Christiansburg and had the first heat pump in town, Hall said, chuckling.

Hall recalled that her mother worked at Leggett’s and several smaller clothing stores. But mostly, “she was pretty much a stay-at-home mom who took good care of us,” Hall said.

Hall said that her older sister, the late Carol Lee Morrison, came down with polio in the 1940s. That was a few years before the polio outbreak in Wytheville that closed athletic facilities, canceled church services and prompted residents to shelter at home as much as people are in the present COVID-19 pandemic.

Between polio and the Spanish flu, “my mom has sort of known a lot of these public health crises,” Hall said.

Hall said there were other long lifespans among her mother’s family. One of her mother’s three older sisters lived to the age of 103, and there is a recording in the Radford University library of this sister reciting the alphabet backwards – at age 100, Hall said.

When the Zoom birthday party began late Wednesday afternoon, Lester still wore her numeral headdress. Her outfit now included an orange lei. There were balloons rising above her seat as a Zoom connection brought up 18 windows on a computer screen — each with one or two faces peering into phones and laptops. The online gathering was drawn from Lester’s nine grandchildren and 14 great-grandchildren and their significant others.

“I’m going to be around for another month,” Lester said.

“Oh, I don’t think they could stand that,” Lester said.

Asked if she knew all the faces on the screen, Lester said someone should go over the names. “I used to have such a good memory and I don’t have any memory at all now,” she said.

“You earned it, Mamaw!” someone called out.

Soon the family was singing “Happy Birthday” in an online chorus, and videos were played of family members who couldn’t attend wishing her well. Lester was told that her first great-great-grandchild was expected soon.

And then Lester’s internet connection cut off, leaving the Zoom party without its central figure.

“It’s really a shame we couldn’t be at O’Charley’s,” a grandson said.

“Next year!” someone replied.

“I had started plans for this year, but they got interrupted,” Hall noted.

There were a few minutes of small talk. Then the Zoom window from the senior living center returned as Shelor brought Lester back online. Family members went back to telling Lester they loved her.

The 104-year-old had a pink, handmade-looking protective mask pulled down from her mouth to speak more clearly. She smiled.

Bernadine Lester (top and above on the left) poses with her older sisters (from left) Alberta, Rena Sue and Gillie. Long lifespans run in Lester’s family, with another of her older sisters living until the age of 103, according to Lester’s daughter, Kathy Hall.