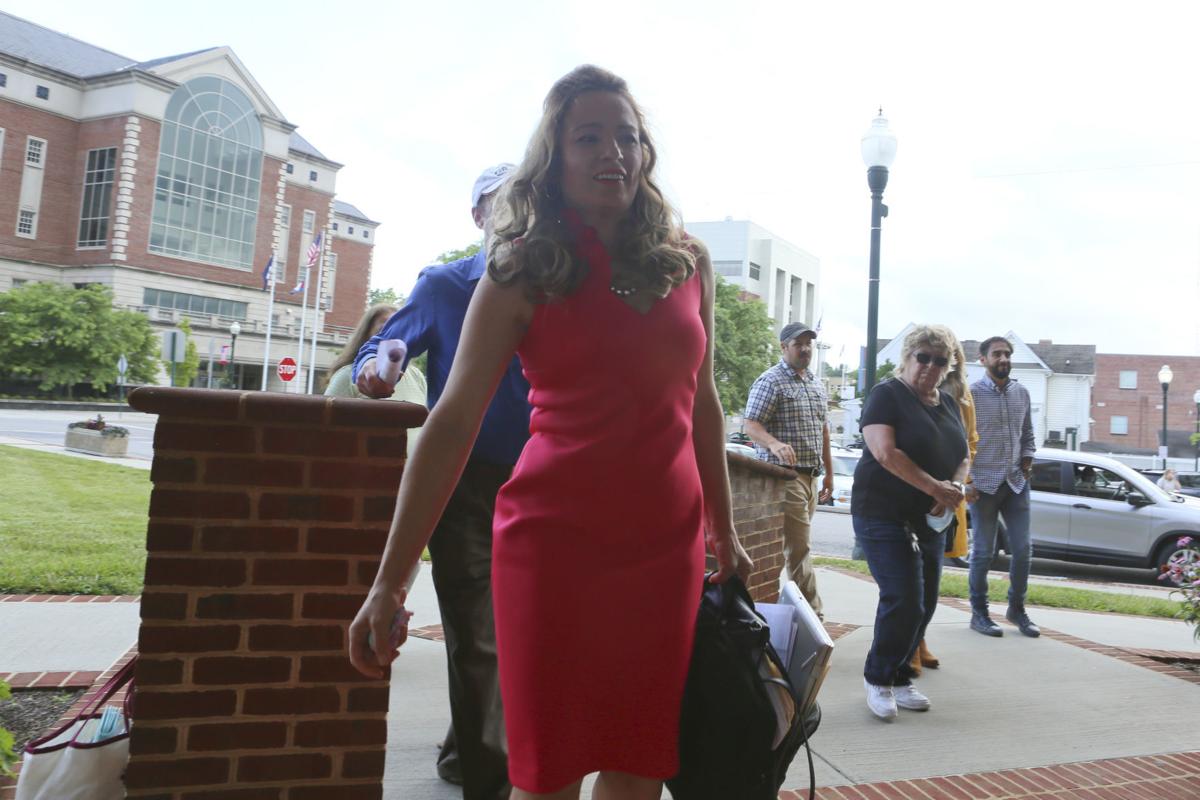 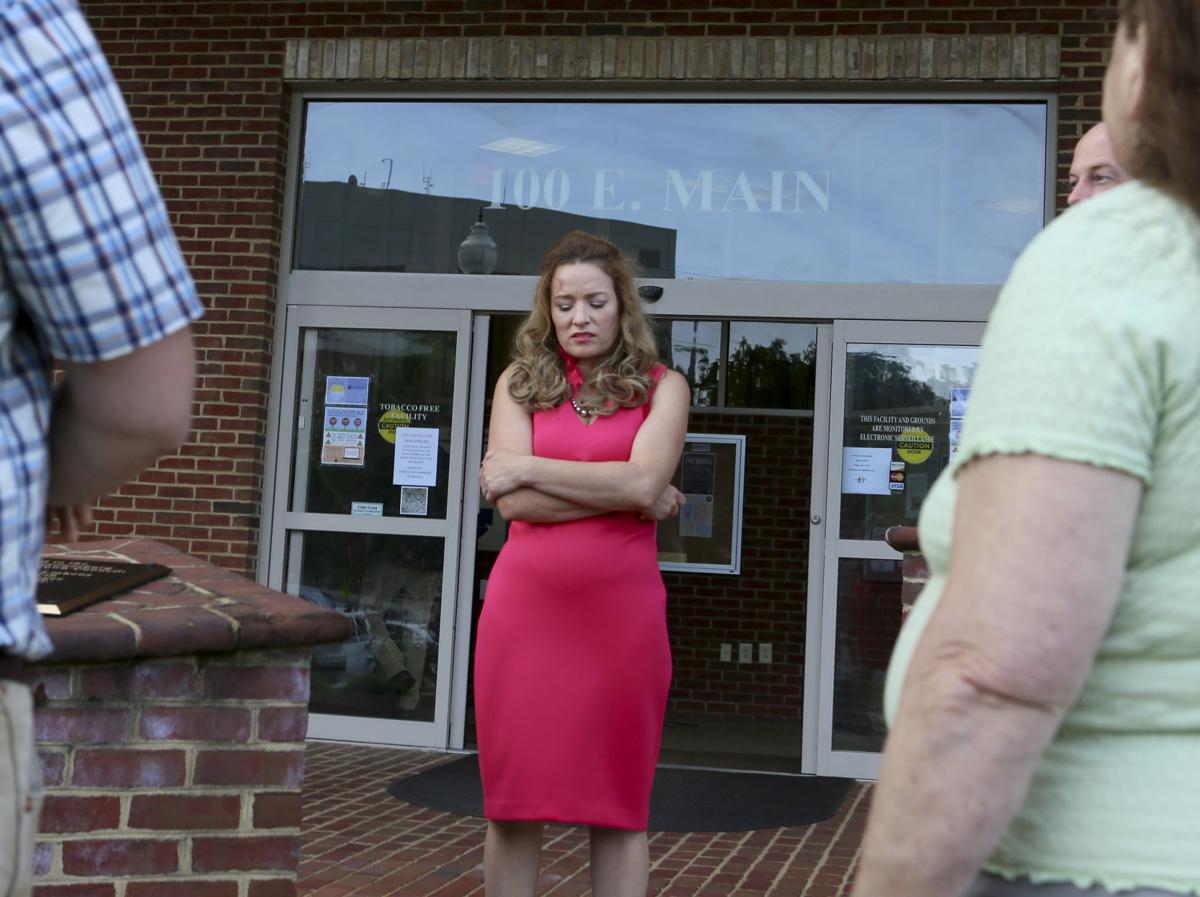 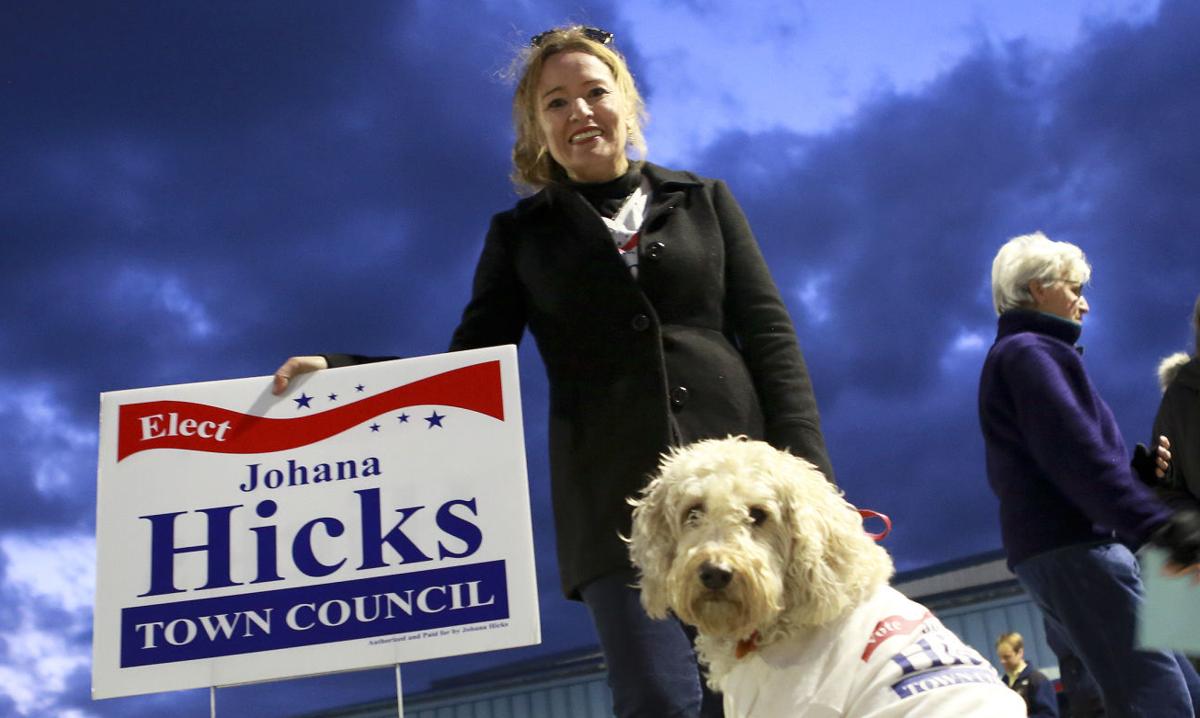 Johana Hicks campaigned with her dog Gonzo before winning election to Christiansburg Town Council on Nov. 5. During her campaign, Hicks criticized the number of closed sessions conducted by the council. 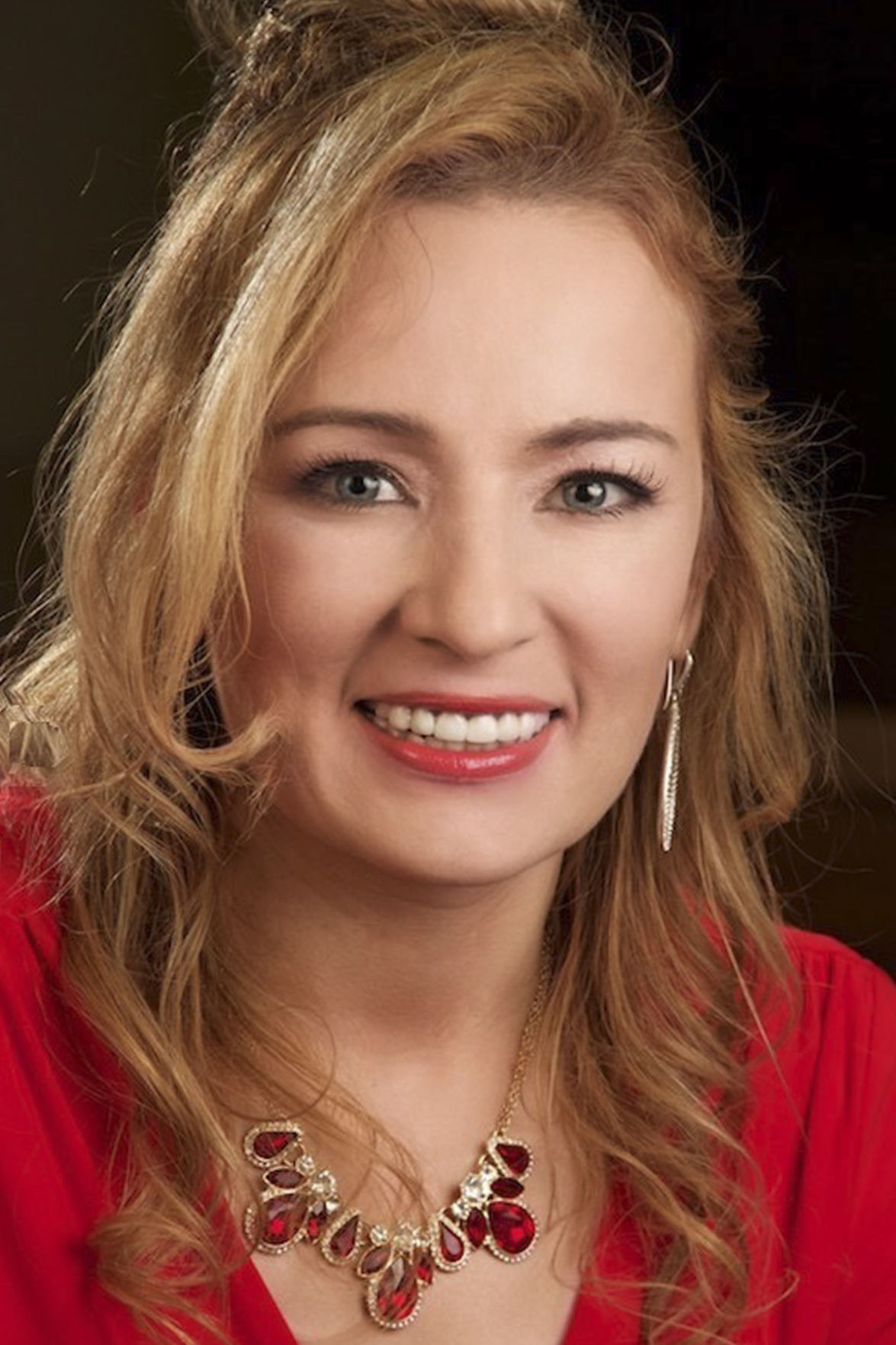 Johana Hicks campaigned with her dog Gonzo before winning election to Christiansburg Town Council on Nov. 5. During her campaign, Hicks criticized the number of closed sessions conducted by the council.

CHRISTIANSBURG — Barely six months into her first term, Councilwoman Johana Hicks is dealing with an ethics complaint and was even told by a fellow council member to consider resigning.

Hicks’ short but tumultuous council experience came to a head Tuesday night during a council meeting.

The main question surrounding her: Have her politics been misunderstood or repudiated by other council members, or is she in over her head?

Briefly in tears during the ethics discussion, Hicks was incredulous. She accused some of her colleagues of never wanting to accept her and evoked a difficult personal journey.

“I feel threatened, I feel scared. You haven’t even taken the time to know who I am. I lost everything in my life,” an emotional Hicks said, referring to a tough childhood that she has said was at one point disrupted by drug traffickers in her native Columbia.

Observations of council discussions this year and numerous correspondences obtained by The Roanoke Times over the past several months show that Hicks and some of her colleagues have not always seen eye-to-eye. They also provide a look into some of the events that have led to the current ordeal.

Hicks ran for office last year by promising to take a stance against the convention of Christiansburg politics, which she argued has hurt the town for years. Among her points that later led to some controversy was a vow to never agree to go into closed council meetings — except, she has said, in personnel cases where disclosure could embarrass certain individuals.

But in matters such as potential litigation, property negotiations, candidate interviews for appointed roles — all cases elected boards are often advised to discuss in private — Hicks said she would vote against going into a private meeting. And if her vote wasn’t enough to stop the closed meeting, she said she would take part and later divulge the details to the public.

After securing her seat in November — a contest in which she garnered the most votes — Hicks began to put into action what she said she’d do during her campaign.

By March, Councilwoman and Vice Mayor Merissa Sachs, the other woman on the council, and the target of much of Hicks’ criticisms over the past several months, filed an ethics complaint against Hicks. Sachs cited social media comments from Hicks that Sachs called problematic and in violation of the town’s code of ethics.

The Roanoke Times obtained from the town social media threads involving Hicks, which were attached to a Sachs email.

“They were not only negative but also very specific in trying to portray me to be someone who doesn’t ‘care’ about the current health crisis at hand or the community itself,” Sachs wrote. “I simply shared the video of the proposed park without comment so the citizens can form their own opinion.”

The park in reference is a long-held plan by the town to transform 60 acres of land off of Peppers Ferry Road into a multi-purpose park and hopefully a recreation hot spot. Sachs previously posted a video of the park on social media.

Hicks has said the park — estimated to cost just under $20 million — may be an unwise use of taxpayer money.

One response Hicks wrote on Facebook was: “Hey [Merissa] is the park going to fix the coronavirus??? The universities are closed, local businesses are going to be suffering … an economy shut down. Events are being closed and you are worrying about this park???”

During this week’s meeting, Mayor Mike Barber read a statement informing the public that the town attorney had reviewed the ethics complaint against Hicks. The town attorney has since presented a list of options for moving forward, according to the statement.

Those options include council solidifying findings that Hicks violated the code of ethics and certain sections of the town charter and Virginia code and potentially taking actions such as a public reprimand, removal from the elected body or doing nothing.

Barber’s statement addressed matters such as the social media comments, emails between Hicks and other council members and issues related to a building permit and required conflict of interest documents determined to have not initially been filled out correctly.

Councilman Brad Stipes declined to comment at length about the matter, but he said it needs to be resolved soon due, in part, to concerns about the ordeal possibly eroding the public’s trust in Christiansburg’s government.

“It’s really sensitive right now. I don’t want to imply anything more or less,” Stipes said in an interview following Tuesday’s meeting. “What we do from here is to restore that [trust]. It has taken a hit here. It has been compromised. Whatever it takes to do that, I’m open for. I don’t know what that looks like, but it does not look like the way things do right now.”

Sachs didn’t speak on the matter during the Tuesday meeting and she further declined comment to The Roanoke Times for this story. She has, however, retained the legal services of attorney and former Montgomery County Supervisor Chris Tuck.

“We’re consulting about legal steps she can take to try to address the situation,” Tuck said Friday. “Everyone in America has the right to freedom of speech, but there are other things that are not protected by the First Amendment. That’s part of what I’ve been retained to evaluate.”

Tuck didn’t divulge further details, including whether a defamation case could be pursued.

“We’re exploring all the options for Ms. Sachs,” Tuck said.

Two issues that have led to some controversy between Hicks and other town council members concern an addition to a property her family owns in Christiansburg and the initial filing of her statements of economic interest — something elected officials must file.

Councilman Henry Showalter, in emails sent this past spring, asked Hicks about a string of her online comments. One read: “This is making me happy when someone tells me thank you. I just got my porch built and I did not have to pay 700 for a permit.”

Showalter asked Hicks to provide the address of the property referred in the message “so we can make certain you did not break the law.”

In an Apr. 24 email, town building official Jerry Heinline wrote that a permit had been obtained for some work, but not a porch.

“I compared GIS imagery to the dwelling from the past 10 years and found no porch had been constructed,” Heinline wrote.

Heinline, Wingfield said, eventually contacted Hicks’ husband about the situation and learned that a permit had been applied for - after the carport work was done.

Barber wrote in email Thursday that further inspections were later conducted and the property is now in compliance. The mayor included a reference to that in the ethics statement.

The issue over the statements of economic interest were forwarded to Montgomery County Commonwealth’s Attorney Mary Pettitt, who determined during an April review that Hicks made errors.

“Obviously, those conflict with what she had previously filed,” Pettitt wrote in an email Friday. “But each statement provided the information to the public that she had a financial interest in Summit Ridge Realty so I did not conclude that it rose to a criminal level of intentionally making a false statement.”

On another matter, Hicks was required to disclose each rental property she or another family member owns and listed just three properties — two in Christiansburg and one in Radford.

Pettitt said that information contradicted what was listed in publicly available land records, which showed that the councilwoman and her husband owned over 20 properties across Montgomery County and Radford. At about that same time, a real estate holdings form the councilwoman filed as a requirement of her appointment to Christiansburg’s planning commission correctly listed all of her property holdings, Pettitt said.

Those issues, Pettitt said, have since been rectified. She said it appears the errors arose from careless inattention to detail, rather than willful criminal actions.

“Therefore, there is not a crime that could be provided beyond a reasonable doubt,” Pettitt wrote.

Hicks denied any wrongdoing in the email thread earlier in the spring.

Still, some council members voiced concerns about how the issues were divulged.

“I’ve never seen anything quite like this before — a constant stream of misrepresentation, inaccuracies, baseless claims and hypocrisy,” Stipes wrote in May. “What to do and where to go from here are both issues to be addressed if we are to have a functional board that can focus on real issues that affect the citizens who elected us.”

Meanwhile, in an interview this week, Hicks continued to defend herself and said she has no plans to resign, something Councilman Steve Huppert suggested Tuesday night.

“Politics are dirty,” she said. “I never imagined this.”

"Piece of work" is usually the phrase attached to such an individual.