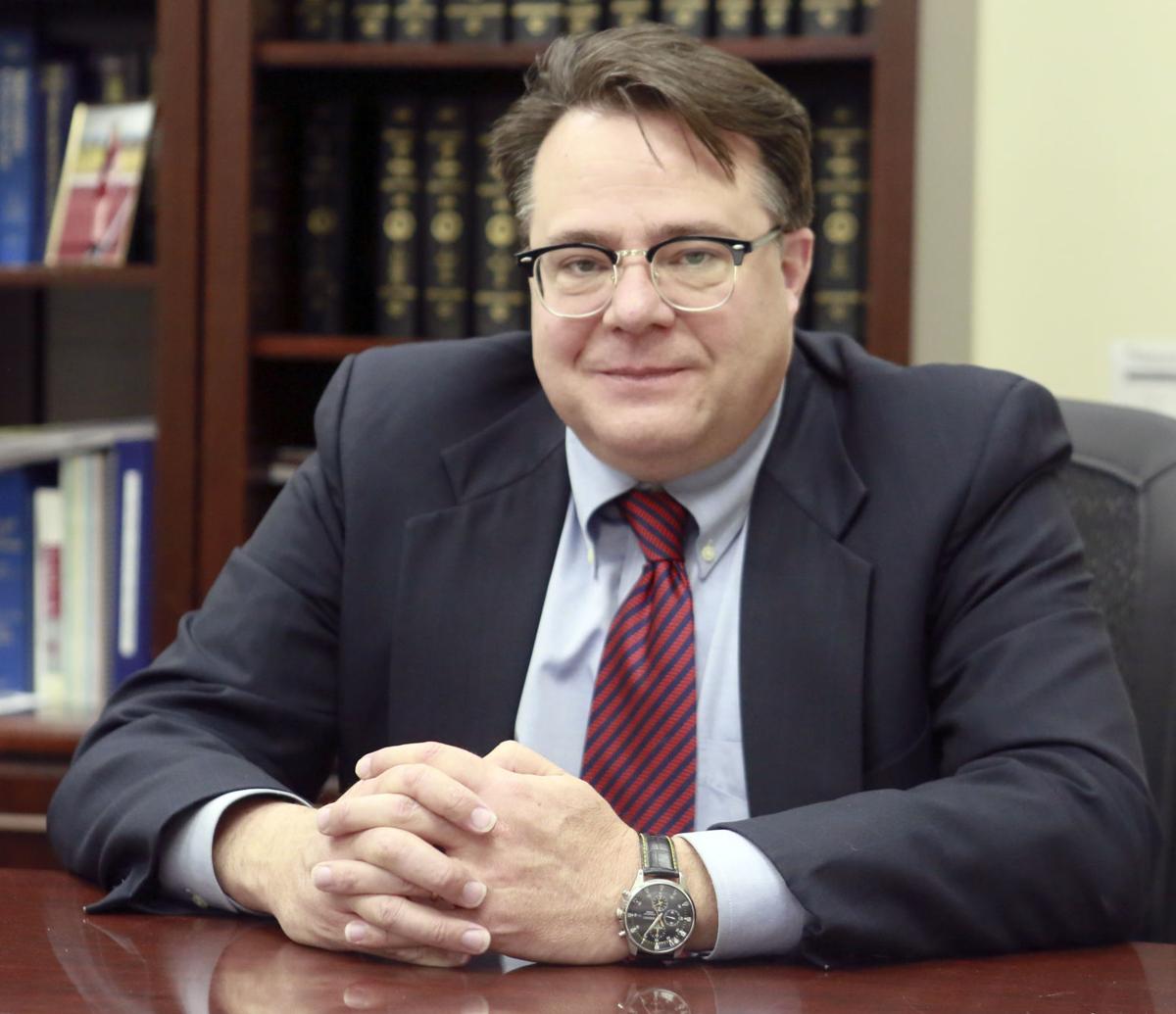 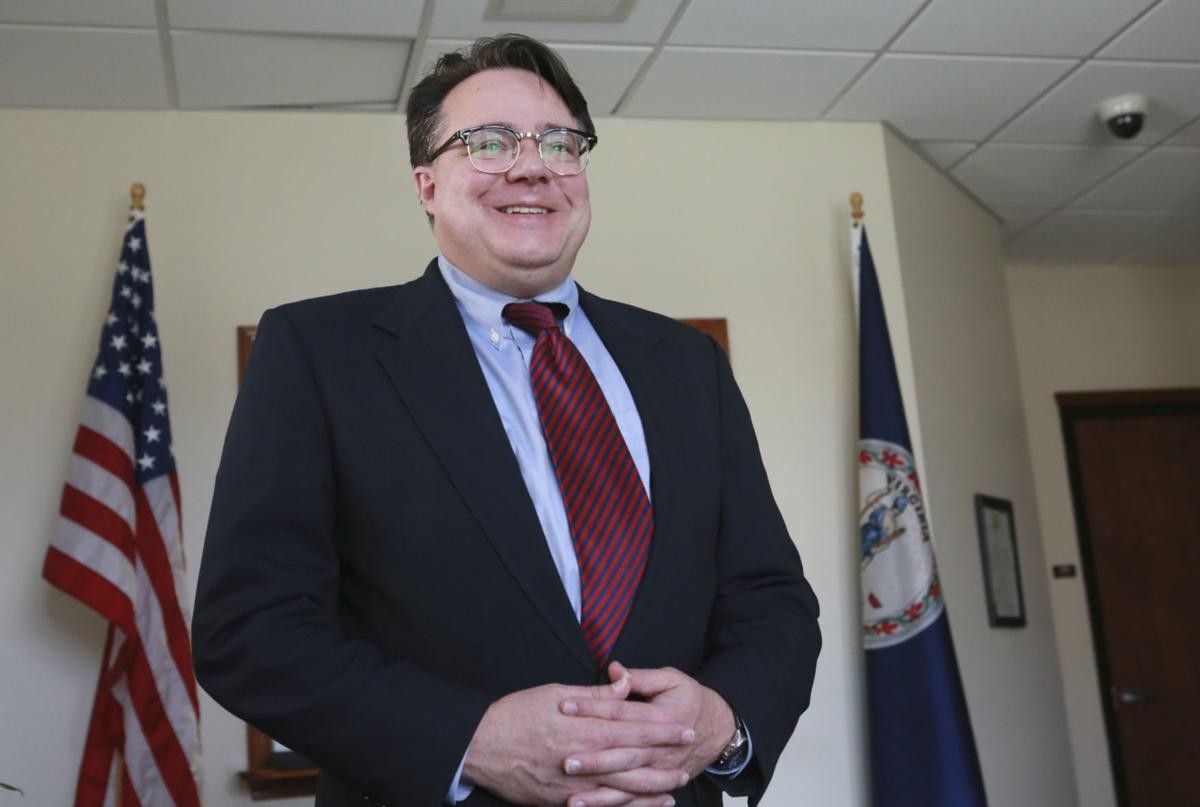 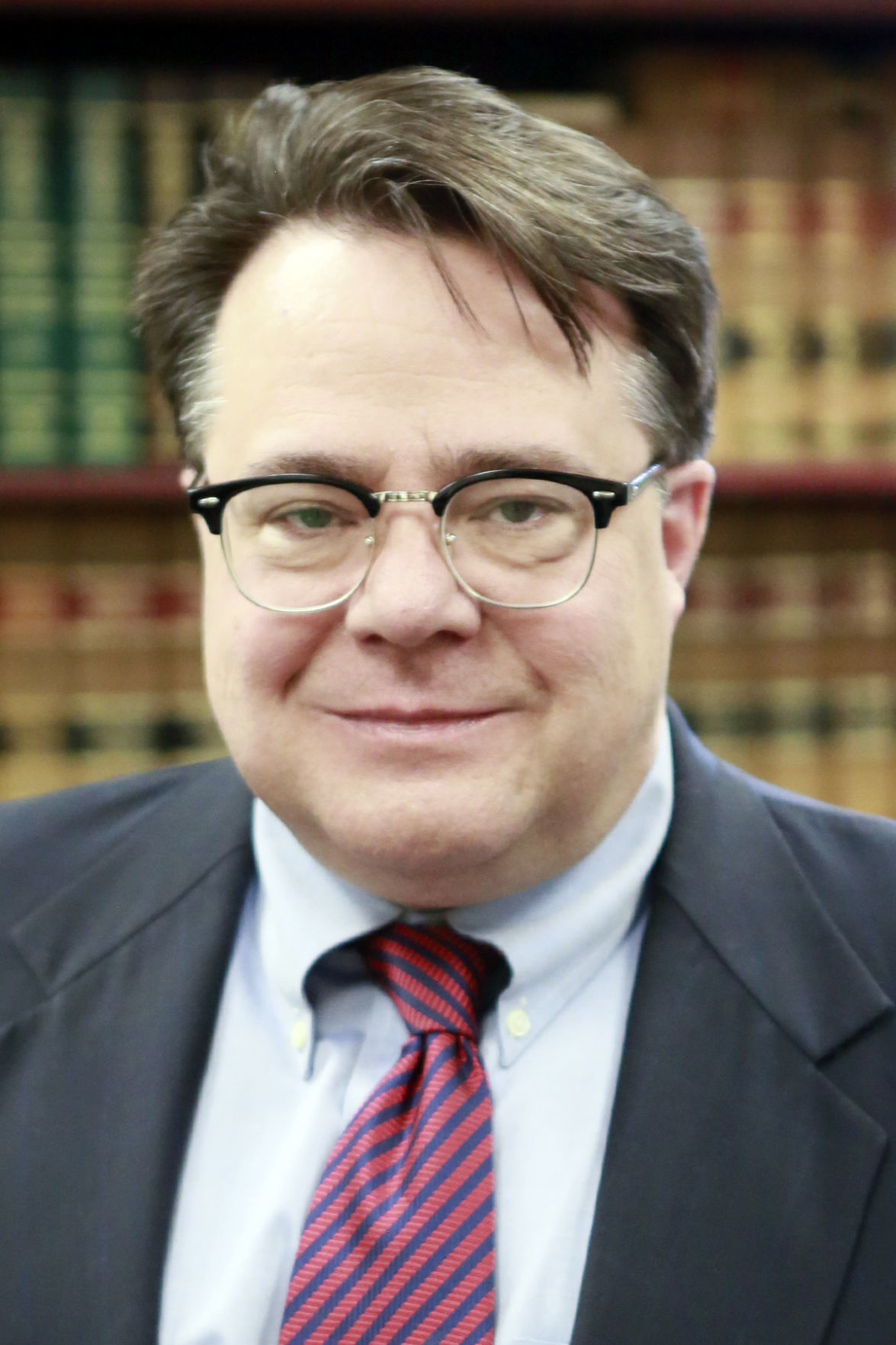 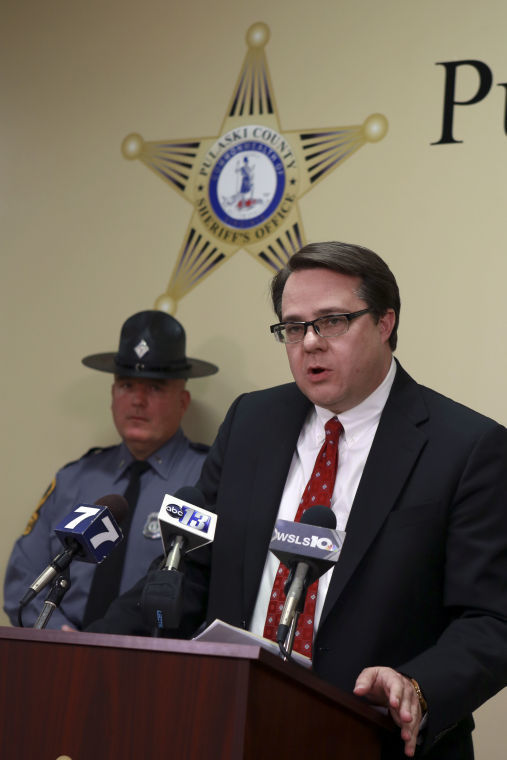 Pulaski County Commonwealth’s Attorney Mike Fleenor speaks during a news conference in 2015 after the nationally publicized death of Noah Thomas. 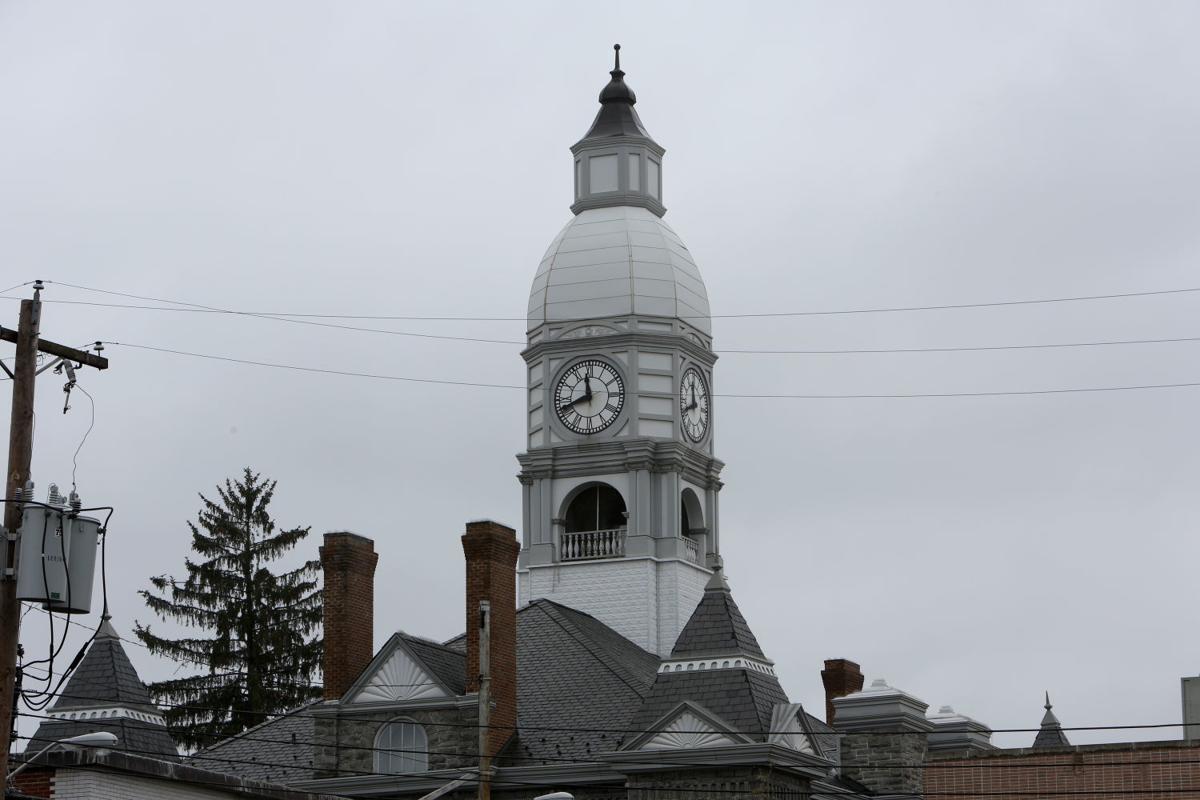 Mike Fleenor, Pulaski County's longtime commonwealth's attorney, will be taking another court role at the county courthouse (pictured) - and others in the NRV - as a circuit court judge.

PULASKI — Preparing to become a judge after years as a prosecutor is a little like going back to law school – and a little like breaking up a family, Mike Fleenor said recently.

Pulaski County’s commonwealth’s attorney for the past 20 years, Fleenor said it was a bittersweet feeling to learn this month that the General Assembly had appointed him to the Circuit Court bench. There was satisfaction at realizing a longtime goal – he’d been considered for a judgeship twice in the past decade – and sadness at stepping away from an office where he and most of his staff worked together for years.

“I’m expecting a big adjustment. … It’s almost like leaving a family and moving away,” Fleenor said.

Fleenor is slated to begin an eight-year term as a judge on July 1 and to oversee cases in Montgomery and Floyd counties.

The locations could change, as they are still being discussed based on the judges and the localities in the circuit, he said.

Fleenor follows Judge Marc Long, whom the General Assembly declined to reappoint to a second term with the Circuit Court.

As Fleenor moves to the bench, Assistant Commonwealth’s Attorney Justin Griffith will become Pulaski County’s top prosecutor on an interim basis, until a special election can be held for the three remaining years of Fleenor’s term as commonwealth’s attorney, Fleenor said. Details still are being worked out but the special election probably will be added to November’s ballot, Fleenor said.

Long’s reappointment sparked partisan sparring during the legislative session, with two Western Virginia Republicans, Sens. Bill Stanley of Franklin and David Sutterlein of Roanoke County, not voting on a judicial nomination list that included Fleenor instead of Long. A group of New River Valley attorneys issued a statement accusing Del. Chris Hurst, D-Montgomery, of leading an effort to take Long off the bench for political reasons.

Neither Hurst nor Long responded to requests for comment for this article.

Appointed when Republicans controlled the General Assembly, Long lost his position in the first session of a newly elected Democratic majority. Fleenor was a veteran Democratic organizer, with a 12-year stint as chairman of Pulaski County’s Democratic Committee.

Fleenor’s party chairmanship ended in 2016 and he said that a judgeship removes him completely from that arena.

“Now I won’t be able to participate in politics,” Fleenor said.

Fleenor declined to comment on the decision not to reappoint Long but praised Long’s legacy in pushing for, then presiding over the New River Valley’s first drug court in Pulaski County.

“He’s really done a remarkable job, changed the lives of a whole lot of people for the better. There’s no doubt about that,” Fleenor said.

Fleenor expects the months between now and when he actually takes the bench to be filled with preparation, including a training program that Virginia has for new judges. He was assigned to a mentor, Judge Sage Johnson, who sits in circuit courts in Washington County and Bristol.

And Fleenor said he’s begun a crash-course refresher on laws and procedures that he hasn’t needed to think about since his days of private practice.

One of the first things he did upon learning that he was becoming a judge was to sit down with Virginia’s law on the equitable distribution of possessions in a divorce – just one of many areas of civil law that a prosecutor rarely sees, Fleenor said.

“It’s definitely going to be a challenge. I’m going to have to do a lot of preparation,” Fleenor said.

With Fleenor’s appointment, three of the New River Valley’s six Circuit Court judges will be former commonwealth’s attorneys. A fourth was an assistant prosecutor.

Some legislators have asked if prosecutors who move immediately to the bench can be fair, if they can sufficiently recognize the issues raised by the defense. Fleenor faced grilling along these lines at an interview with legislators before being added to the appointment list.

Recalling the questions, Fleenor said he had no doubts about his capacity to weigh evidence and arguments from both prosecution and defense, and that commonwealth’s attorneys consider both sides in evaluating the strength of a case.

State Sen. John Edwards, D-Roanoke, who voted for Fleenor’s appointment, said last week that he recognized concerns about so many judges being former prosecutors but thought judicial candidates have to be considered individually. Fleenor is fully qualified to be a judge – “the one person in the courtroom who is not on anybody’s side,” Edwards said.

Fleenor is “a really fine guy … very well-regarded by everyone,” Edwards said.

The son of a dentist and brother of a doctor, and a Pulaski County High School graduate, Fleenor said he planned to major in chemistry when he started at Virginia Tech in 1983.

“I always thought I’d go to medical school or into some sort of health care,” Fleenor said.

But he found he loved political science, not chemistry, and graduated with a bachelor’s degree in political science. Then he went to Mississippi College School of Law, finishing in 1991 and going to work as a lawyer. In 1999 he made what would be the first of five successful runs for office.

Married and with two daughters, one at Tech and one at Pulaski County High School, Fleenor said he had found his public role more satisfying than private practice. Becoming a judge was something he’d considered for years, he said.

Fleenor said he still regards as his most significant case one that arrived just over two weeks after he first became commonwealth’s attorney: the murder of Tara Rose Munsey. Tara was a Radford 16-year-old who disappeared after work and whose body was found in Parrott. Fleenor prosecuted Jeffrey Allen Thomas, who had dated the mother of Tara’s boyfriend, and won a capital murder conviction.

The conviction was overturned on appeal with a ruling that the trial judge should have agreed to a defense request for a change of venue. Fleenor prepared to try Thomas again, then reached a plea agreement that sent Thomas to prison for life.

The case drew national attention, in part because Tara’s mother, the late Kitty Irwin, made public appearances to oppose the death penalty for Thomas.

Recalling the case, Fleenor said he never asked the jury for Thomas’ execution, but pursued a capital murder charge because he thought jurors should have the option in deciding Thomas’ fate.

“I felt all along it was not up to me,” Fleenor said.

Starting in July, of course, many cases will be up to Fleenor. He said that as he prepares, he holds former New River Valley judges Colin Gibb and Duane Mink as models to try to live up to.

Justin Griffith stepped into his new job as Pulaski County’s commonwealth’s attorney Wednesday with a promise to support law enforcement.

Pulaski County Commonwealth’s Attorney Mike Fleenor speaks during a news conference in 2015 after the nationally publicized death of Noah Thomas.

Mike Fleenor, Pulaski County's longtime commonwealth's attorney, will be taking another court role at the county courthouse (pictured) - and others in the NRV - as a circuit court judge.