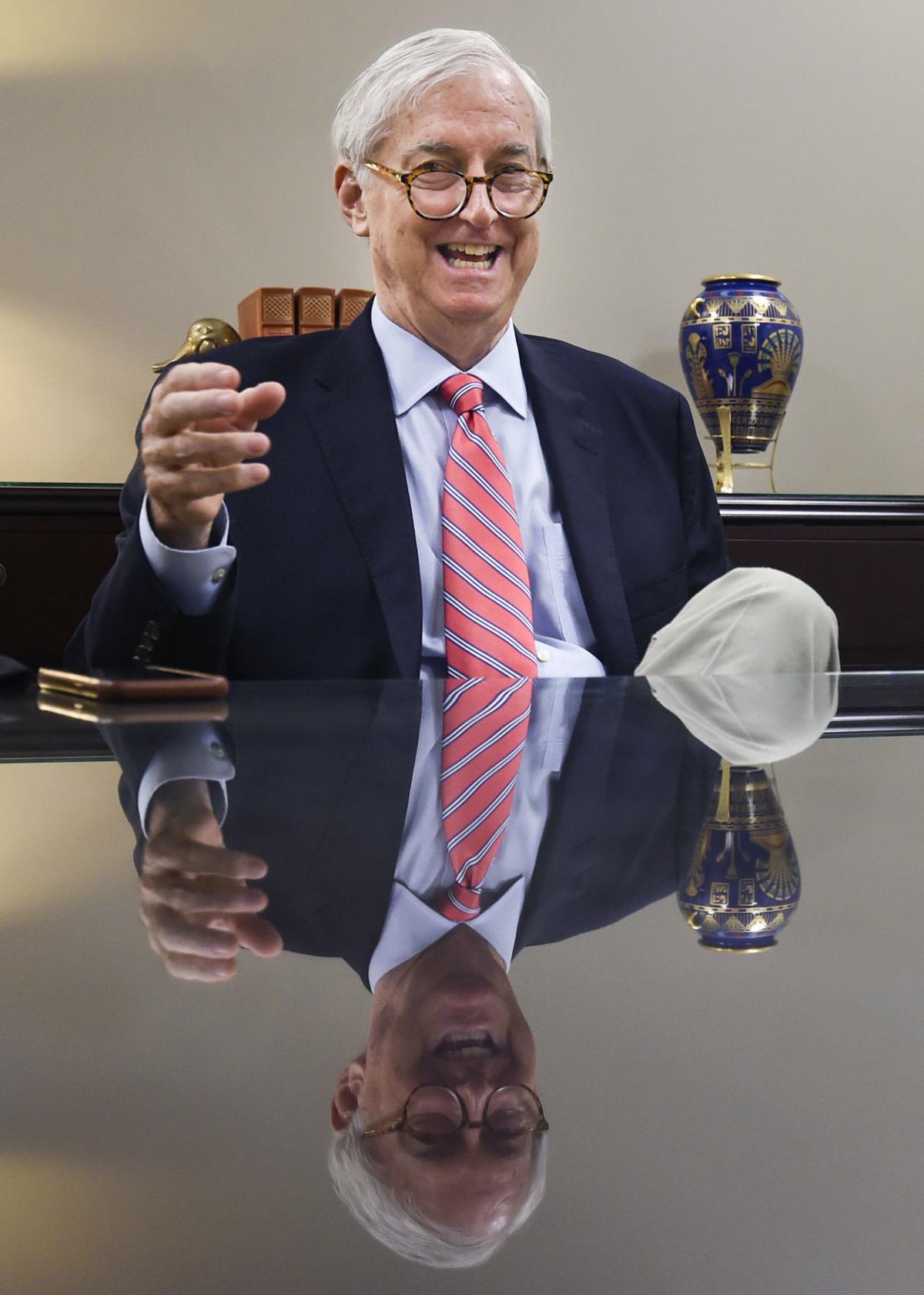 Circuit Court Judge Marc Long offered his thoughts on his career and the current state of U.S. leadership as he prepared to leave the bench. 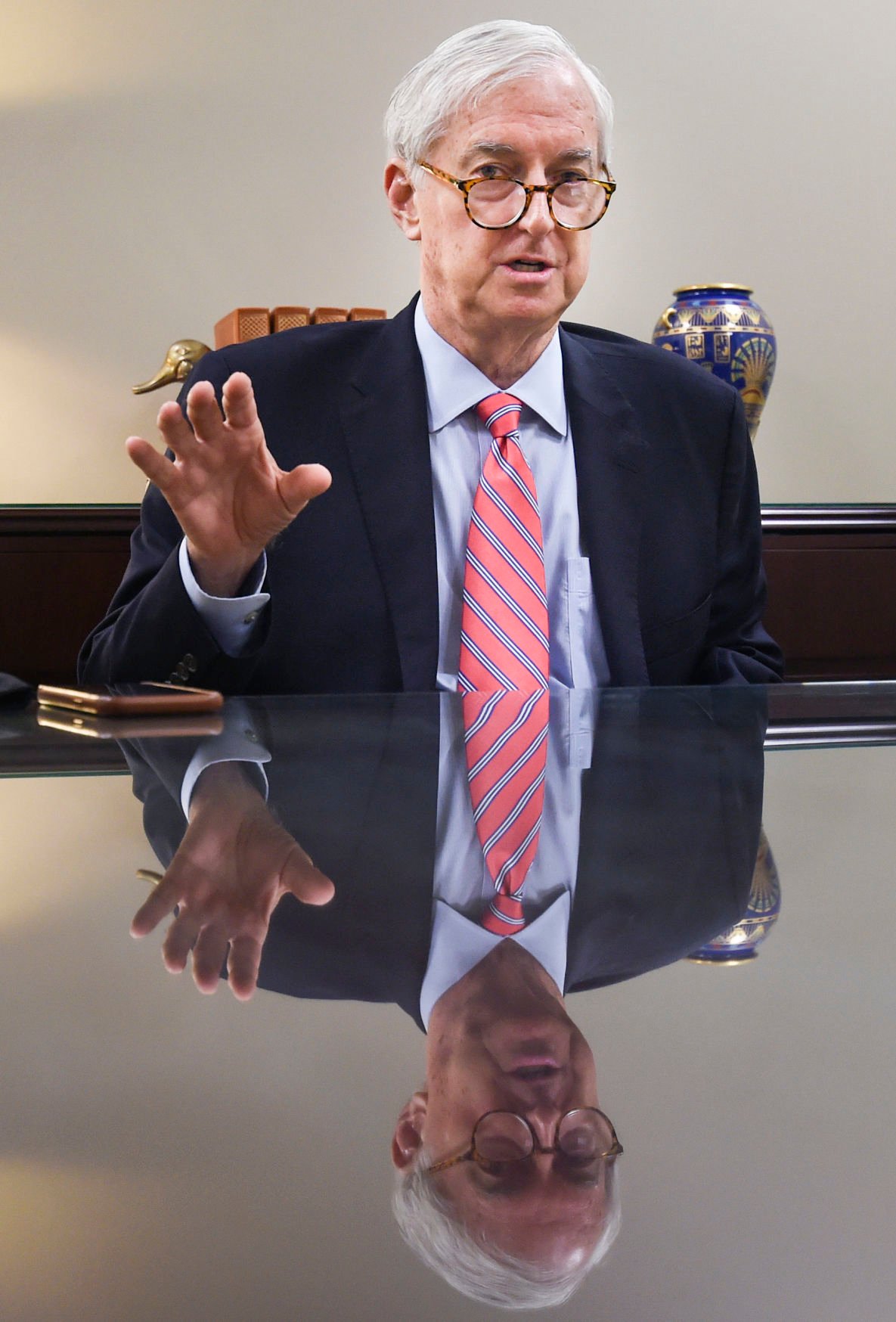 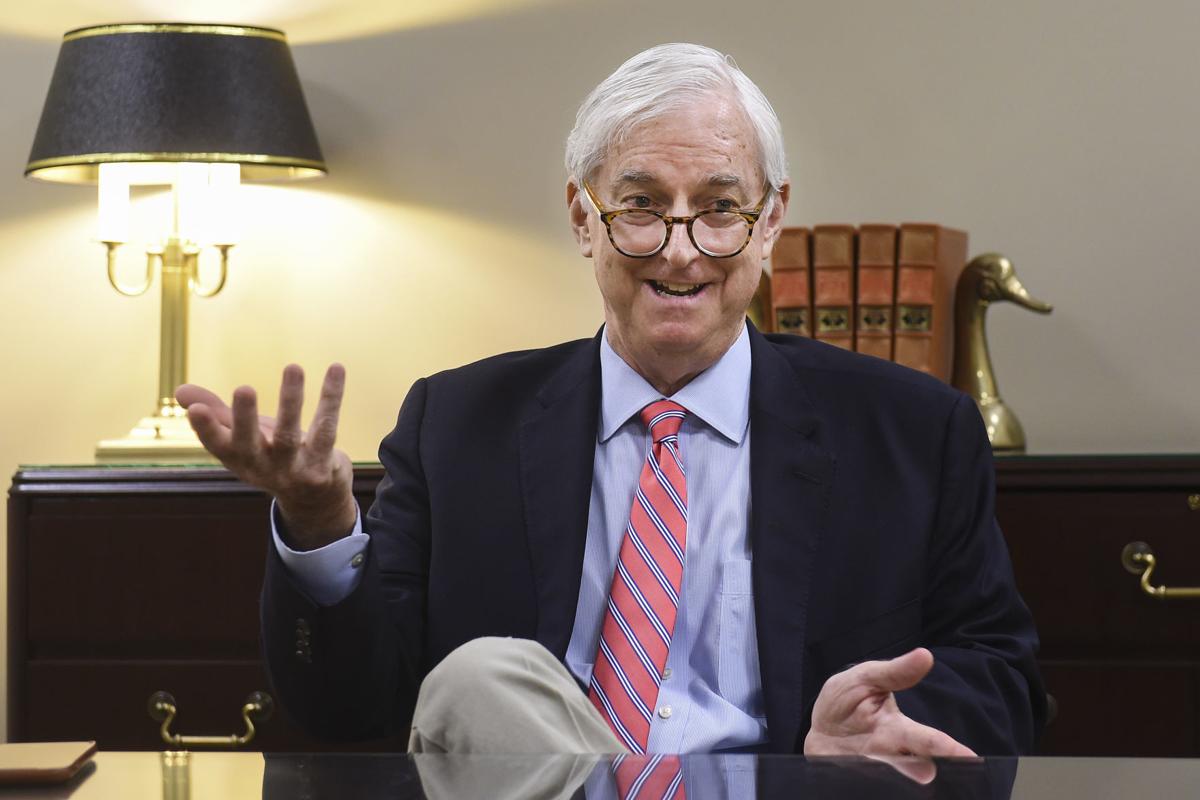 Judge Marc Long started several drug courts in the New River Valley and is proud of their successes. 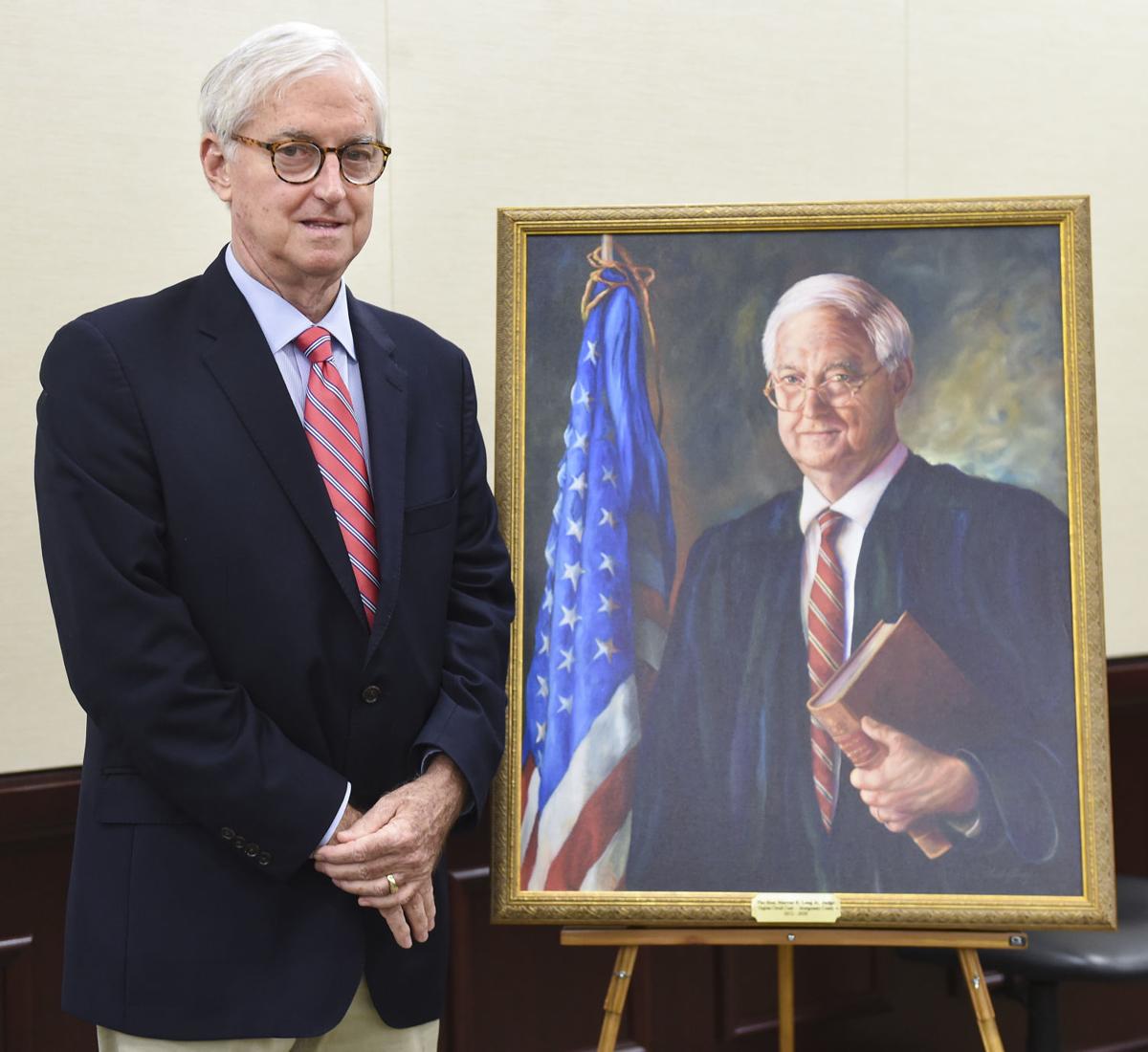 Marc Long, chief judge of the Montgomery County Circuit Court, poses for a portrait with a painting done of him that will soon hang inside the courthouse. Long retired as of July 1. 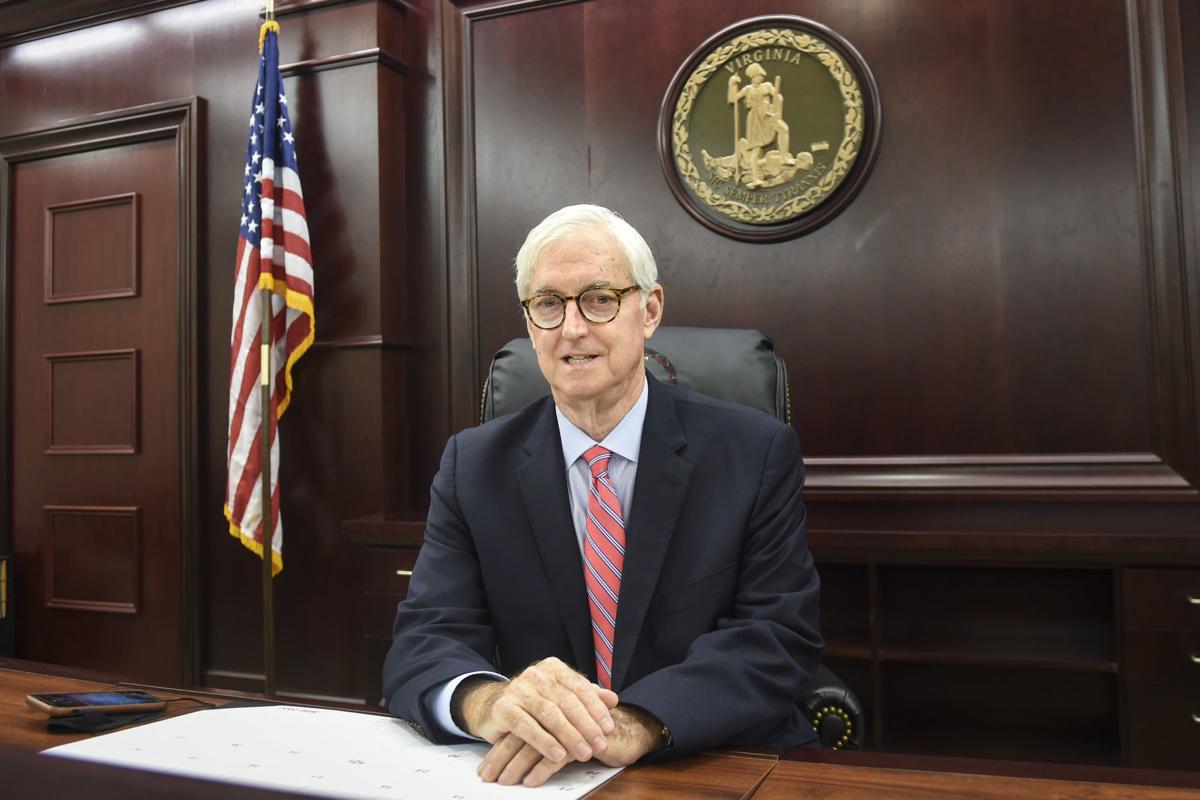 Judge Marc Long reflected on his career as he prepares to move into his retirement.

CHRISTIANSBURG — Wednesday marks the first time in 15 years that Marc Long won’t be presiding over a court in the New River Valley. And while it wasn’t his choice to leave quite yet, the veteran judge and attorney said he is at peace.

“I am fine with it. I’m resolved,” Long said last week. “In some ways I was looking forward to retirement.”

And retirement — which is beginning with a move to North Carolina — could be busy.

In an interview where he looked back at almost half a century of work in the courts, Long, 69, said he may do some legal consulting next. But he seemed more excited about getting involved in community action around his new home.

Long said he wants to speak out about racial issues more than he thought he could as a judge, especially about ways to bring equity to Black and other minority families. Weaving in references to recent statements by civil rights activist and U.S. Rep. James Clyburn, D-South Carolina, and political comedian, now director Jon Stewart, Long said he hoped a grassroots push might finally bring more fairness to racial relations.

Long recommended the movie “Just Mercy” and said that in his opinion, the single best improvement the United States could make to the justice system would be to do away with the death penalty because it disproportionately executes minorities.

Saying he knew his remarks might surprise some, Long chuckled.

“I’m getting my First Amendment rights back,” he said.

Of course, Long is not exactly known for holding back.

A circuit court judge since 2012, and a juvenile and domestic relations court judge for seven years before, Long earned praise for launching drug courts in Pulaski and Floyd counties – and criticism for sometimes acerbic comments from the bench.

As an example, at a 2018 hearing in a civil case with five attorneys arguing before him, Long threatened to sanction one lawyer, called another annoying, asked a third if he had reversed his position, and told the remaining two they had filed none of the elements needed to make their case.

When attorneys and courtroom workers were surveyed for Long’s 2019 Virginia Supreme Court Judicial Performance Evaluation, a regular review that judges undergo, Long’s courtroom demeanor was faulted and he received low scores from some in the areas of patience, courtesy and respect in the courtroom. Nearly 26 percent of respondents described his performance as unsatisfactory or needing improvement.

In January, Del. Chris Hurst, D-Blacksburg, cited the performance evaluation among his reasons for keeping Long off the General Assembly’s reappointment list. Despite an attempt by Sen. Bill Stanley, R-Franklin County, to restore Long to the list — and with attorneys writing letters for and against Long’s reappointment — Hurst’s action stuck.

Long’s term expired Tuesday and Mike Fleenor, who was commonwealth’s attorney in Pulaski County, took his place as a circuit court judge presiding over cases in Montgomery and Floyd counties.

Long shook his head last week as he recalled courtroom exchanges. “I don’t think my comments were gratuitous. … Enough is enough sometimes. These lawyers should know better,” he said.

Still, Long added, it was his choice to speak.

Long said that one of his biggest lessons as a judge was how addiction is at the center of so many cases. He said he quickly became convinced that locking up addicts did not help.

“I’m really, really interested in finding alternatives to incarceration … A person with addiction doesn’t need to be in a jail cell,” Long said.

In 2010 as a juvenile and domestic relations judge, Long began a family drug court for families with children in foster care. Instead of being sentenced to prison, offenders received heavy supervision and met with the judge regularly as they received treatment and tried to rebuild their lives.

“It worked like a charm,” Long remembered, with five of six initial families able to reunite with their children and to have homes and jobs within six months.

The family drug court did not continue after Long was appointed to the circuit bench, but in 2014, he set up a drug court in Pulaski County, followed a year later by another in Floyd County. These were the first in the region. Other judges followed with drug courts in Montgomery and Giles counties and in Radford.

Usually two-year programs, drug courts can set aside a defendant’s charges if they complete treatment, hold a job and meet other requirements. Judges usually meet with participants monthly. There are frequent drug tests. It is not an easy regimen, Long said.

Long said he found it inspiring that many drug court participants were able to turn their lives around. The effects ripple out to families, friends and co-workers of the couple dozen or so people who are in a drug court at any one time, he said.

In 2018, Long began saying he was thinking about stepping down — sometimes offering in the midst of a hearing that he had been a judge for many years and did not plan to continue. But in 2019, Long told legislators he wanted to be reappointed.

Last week, Long said he changed his mind after others in the court system urged him to stay and because he wanted to begin a mental health court along the lines of the drug courts.

Virginia has a mandatory retirement age of 73 for judges, so he would not have been able to complete another term, Long noted. “I wanted to go up for three years. I thought I could get it started,” Long said of the mental health court.

After the General Assembly’s decision not to reappoint him, Long found his courtroom role constrained even earlier than expected. At the end of April, he caught his toe on a stair tread at his North Carolina house and fell, breaking his pelvis and shoulder.

“My left side got demolished,” Long said.

Only last week was he able to return to court.

In a sense, Long’s judgeship ended the way it began, amid newspaper articles and outcry from the region’s legal community.

In 2005, when Long was first appointed, there were suggestions that $19,000 he donated to Republican legislators had an undue influence. Attorneys complained that the Radford-Montgomery Bar Association nominated another lawyer for the judgeship, the wife of Long’s former legal partner.

Long dismissed the complaints then and did again last week.

“I did what I did but I don’t think it was with the aim of buying a judgeship,” Long said. “It was awfully cheap if that’s all it took.”

Long said when he became a judge, it was just a continuation of what had been 29 years of practice as a lawyer.

Long said that when he was an attorney, he sometimes thought presenting a case was “like a symphony,” rising to a crescendo at the end. Hearing a verdict sometimes meant “you learn your stomach has new ways to flip,” Long said.

As a judge and as an attorney, Long said he learned to trust juries, saying he thought they “pretty much get it right – not always but they’re pretty accurate.”

Asked his favorite cases, Long listed matters that involved some area of specialized knowledge that he found interesting, such as representing violinist David Ehrlich in a lawsuit against other performers of the Audubon Quartet, or a personal injury case that had involved testimony about an array of alternative health treatments.

As a judge, the worst cases involved harm to children, Long said, recalling x-rays and pictures of injured babies. Almost as bad were cases in which animals were hurt. Long said he refused to take plea agreements in cases where children or animals were hurt.

Long said one thing that he definitely will not be doing is running for elected office. But he said there were plenty of avenues to involve himself in community action and to work on improving racial issues.

Asked if he might join a Black Lives Matter protest, Long was noncommittal — but said he disagreed with those who criticize protesters.

“It irritates the hell out of me when I hear someone say, ‘Yes, but all lives matter,’” Long said. “That’s not the point.”

Long said that peaceful protests are needed — along with leadership.

“We don’t have the great leaders we used to have,” Long said. “Who is that person? Is it Biden? It could be. I’m not going to say any names but we know who it’s not.”

Long said he was proud to have served as a judge and would miss many people as he moved on. But he said he was looking forward to the next chapter.

Justin Griffith stepped into his new job as Pulaski County’s commonwealth’s attorney Wednesday with a promise to support law enforcement.

Circuit Court Judge Marc Long offered his thoughts on his career and the current state of U.S. leadership as he prepared to leave the bench.

Judge Marc Long started several drug courts in the New River Valley and is proud of their successes.

Marc Long, chief judge of the Montgomery County Circuit Court, poses for a portrait with a painting done of him that will soon hang inside the courthouse. Long retired as of July 1.

Judge Marc Long reflected on his career as he prepares to move into his retirement.