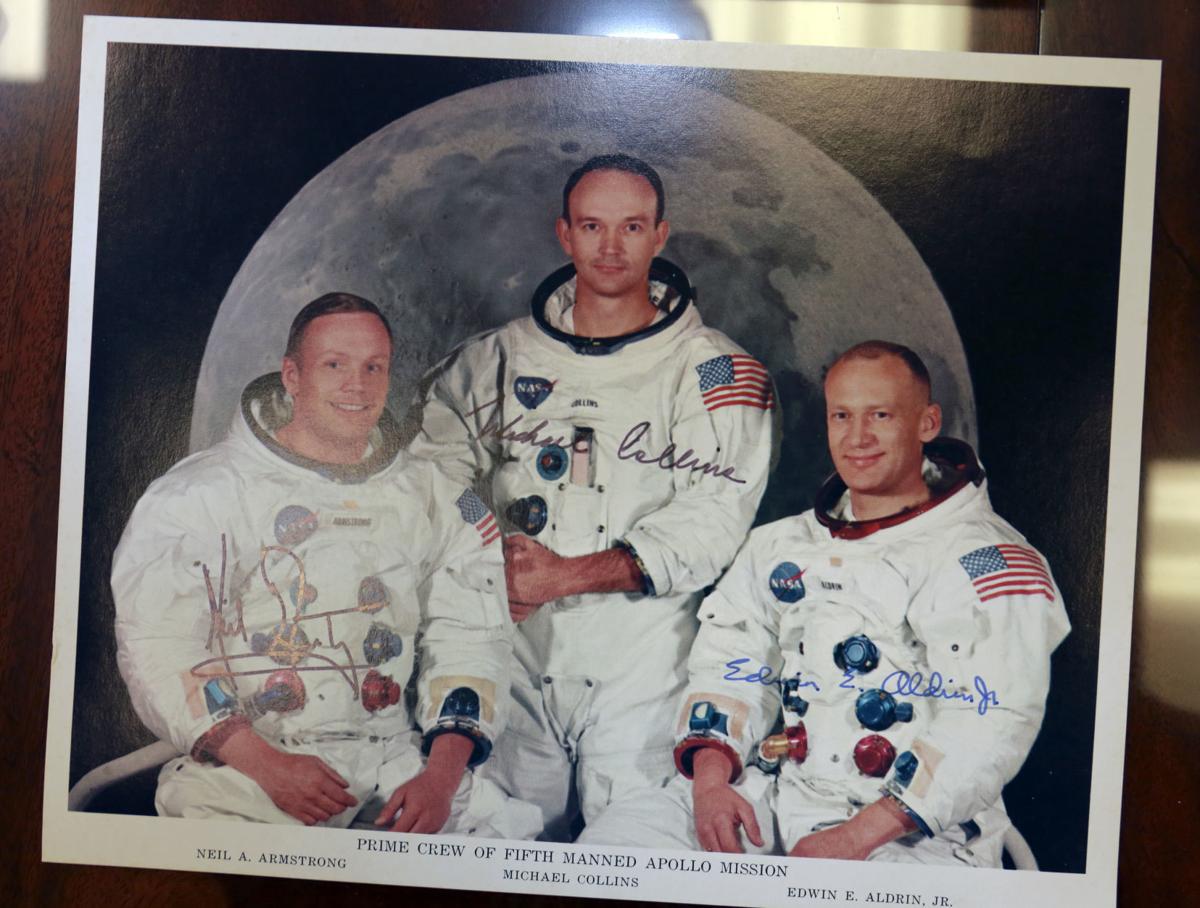 An autographed photo of the Apollo 11 astronauts is part of the Virginia Tech collection. 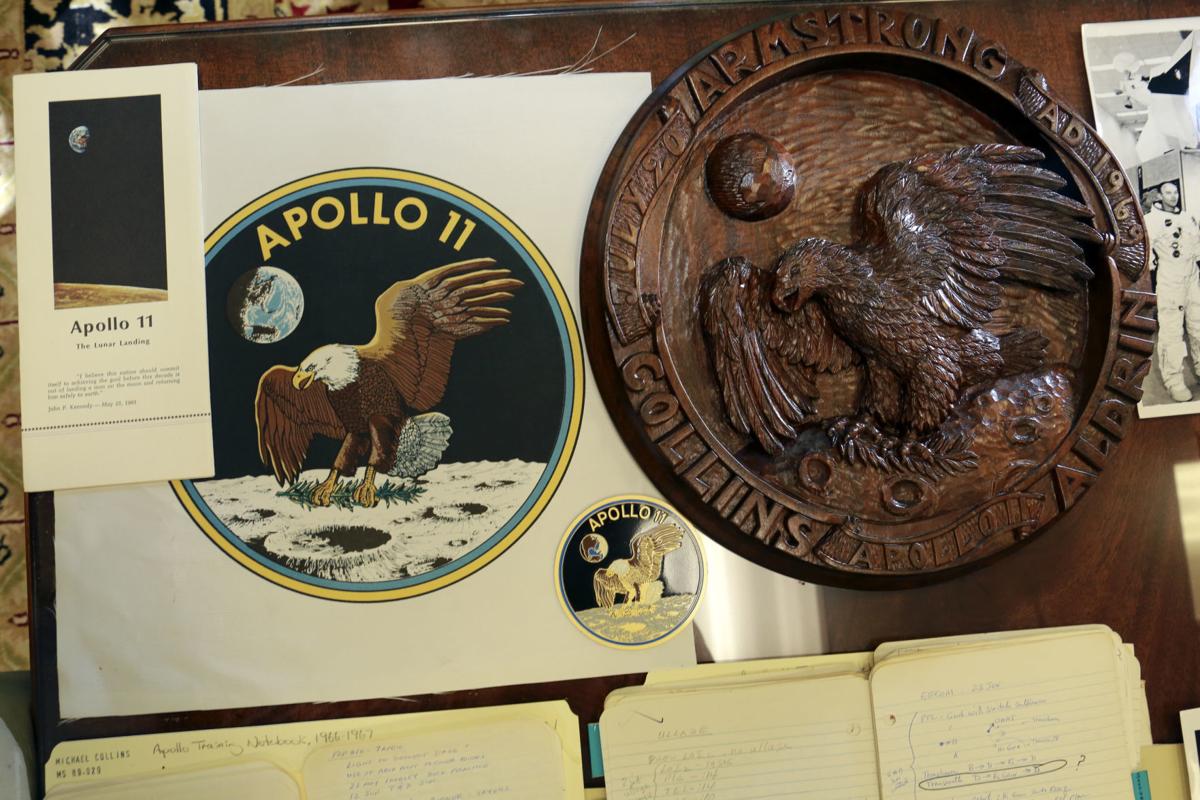 July 20 will mark the 50th anniversary of the Apollo 11 lunar mission.

BLACKSBURG — Michael Collins’ flight plan lays out everything he and his fellow Apollo 11 crew members needed to do for a successful moon landing.

Today that plan, and a cache of other mementos related to the Apollo missions, are part of Virginia Tech’s Special Collections unit located on the first floor of Newman Library. They are on display until Aug. 16 to commemorate the 50-year anniversary of the July 20, 1969, moon landing. They’re part of Virginia Tech’s extensive Archives of American Aerospace Exploration.

The materials “capture the excitement and wonder of what happened,” said Marc Brodsky, a special collections public services and reference archivist.

One of the most significant events of the 20th century, Neil Armstrong and Buzz Aldrin touched down on the moon in 1969. Collins orbited around the moon in the Apollo 11 Command Module while his fellow astronauts made their descent to the lunar surface inside the Eagle, the mission’s Lunar Module.

One of Brodsky’s favorite items is a letter to Collins from another notable historical figure, Charles Lindbergh. The letter praises Collins for his role in the landing.

Lindbergh — first pilot to fly solo across the Atlantic Ocean — wrote: “I watched every minute of the walk-out, and certainly it was of indescribable interest. But it seems to me you had an experience of in some ways greater profundity — the hours you spent orbiting the moon alone, and with more time for contemplation.

“What a fantastic experience it must have been — alone looking down on another celestial body, like a god of space! There is a quality of aloneness that those who have not experienced it cannot know — to be alone and then to return to one’s fellow men once more.

“As for me, in some ways, I felt closer to you in orbit than to your fellow astronauts I watched walking on the surface of the moon.’’

There are dozens of boxes of items featuring Collins’ original copy of the flight plan, on which he jotted “the real McCoy;” photographs taken by Collins from his vantage point orbiting the moon; and gifts he received from fans, including commemorative postcards from Soviet cosmonauts.

The Collins’ items are just a small sampling of the NASA-related materials Tech keeps.

Tech’s library began receiving materials from giants in the space program in the 1980s. The donations started in 1986 with a gift from Chris Kraft, a Tech graduate and director of flight operations for Apollo 11.

Kraft, now in his late 90s and a resident of the Houston area, declined a Roanoke Times interview request.

He did, however, share his thoughts on the mission for the 50-year anniversary of the moon landing with the Houston Chronicle, including his love for his role as flight director rather than as an astronaut.

“I liked my job better than theirs,” Kraft told the Chronicle. “I got to go on every flight, and besides that, I got to tell them what to do.”

Kraft, the namesake of Kraft Drive in Blacksburg, loved his alma mater and his decision to donate many of his personal materials influenced others involved in the space program to do the same.

“Virginia Tech gave me the opportunity to be an educated person, and they did a fine job of it in many ways,” Kraft said in an oral history interview with the VT Stories project in 2017. “They continue to expand on that capability, and I think they are one of the best universities in the country as a result of that. I would have not gone anywhere without Virginia Tech.”

Kraft’s donation and aggressive work by Tech archivists in the 1980s led to Collins’ donation as well as donations from a number of other aeronautical sources like Evert Clark, an aviation and space journalist who covered Apollo 11 mission for Newsweek and Robert Gilruth, former head of the Space Task Group for project Mercury and director of NASA’s Manned Spacecraft Center in Houston.

Today those items make up the Archives of American Aerospace Exploration.

“This is a destination for science and technology materials,” Brodsky said. “It makes sense for them to be here.”

The materials are often used by researchers, Virginia Tech students and authors, Brodsky said. For example, a producer for the 2018 movie “First Man,” which focuses on Armstrong and NASA’s efforts to put him on the moon, called to inquire about Kraft’s office setup as they got the movie ready, according to Brodsky, though the efforts weren’t really used in the film.

The items’ preservation is key for maintaining a modern day connection with momentous past events like the lunar landing.

“If you want to reconnect with the past, having the actual materials ... is an important piece of that process,” Brodsky said.

What: Celebrating the 50th Anniversary of Apollo 11

Where: Virginia Tech's Special Collections on the first floor of Newman Library, adjacent to the cafe.

Apollo 11's flight operations director Chris Kraft made the first donation to what has become an extensive research collection at his alma mater.

One small step for Radford University is one giant day of fun and activities for local residents.

An autographed photo of the Apollo 11 astronauts is part of the Virginia Tech collection.

July 20 will mark the 50th anniversary of the Apollo 11 lunar mission.