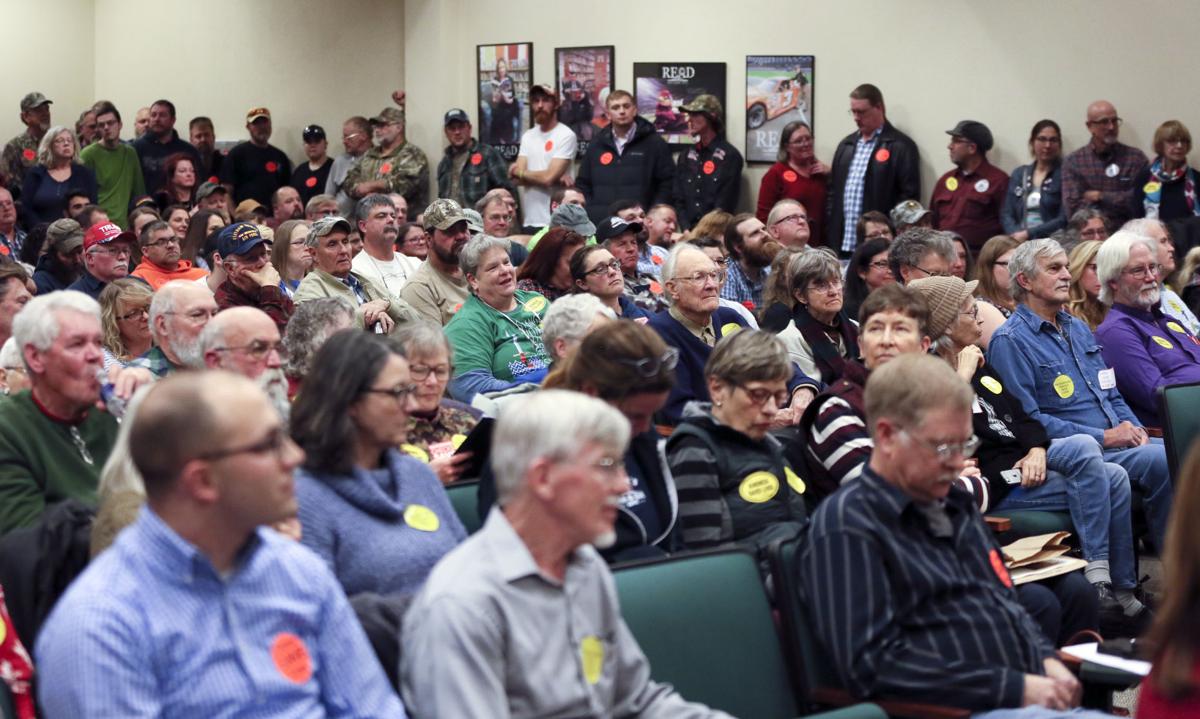 An overflow crowd attended the Montgomery County Board of Supervisors meeting than ran into early Tuesday morning. 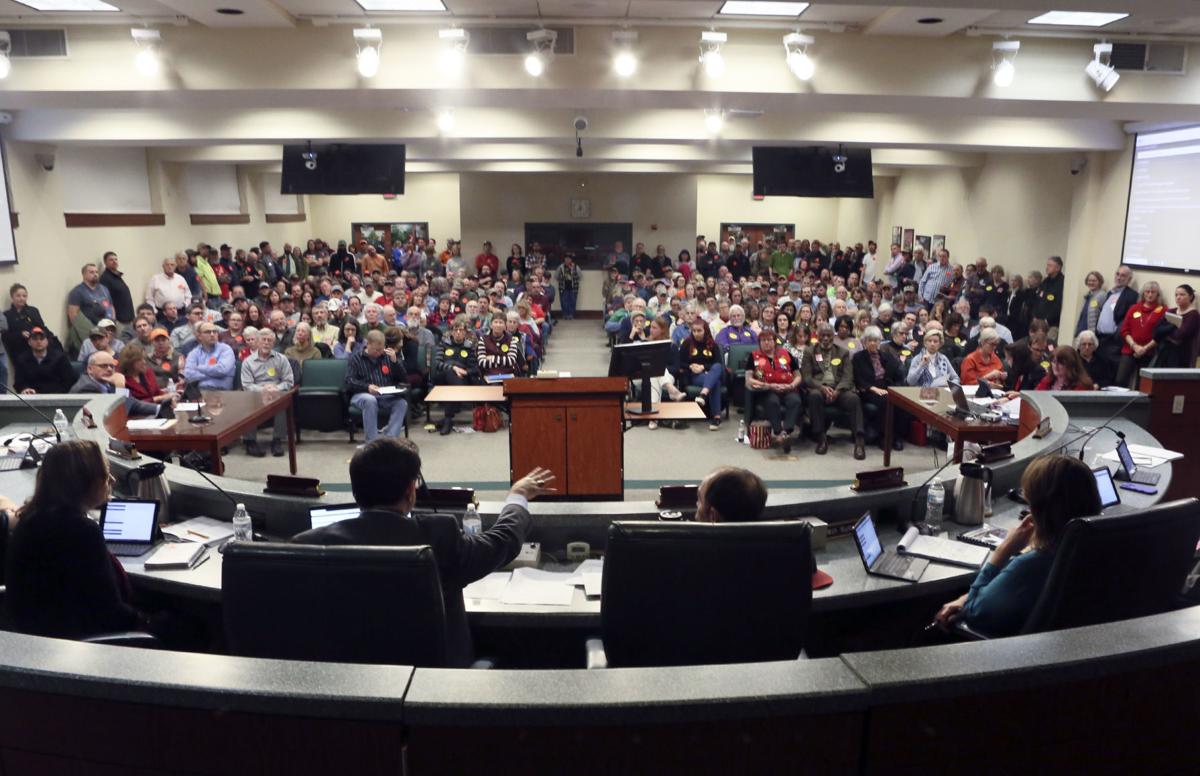 In front of an overflow crowd, the Montgomery County Board of Supervisors began a public comment period addressing the Second Amendment sanctuary topic Monday night.

PULASKI COUNTY — Nearly 800 citizens erupted in applause as the board of supervisors unanimously passed a motion changing its resolution to become a Second Amendment “supportive” county to a “sanctuary” county.

The change was made at the request of Fairlawn citizen Gary Hughes — the first to contact the county about the designation back in November — because he felt the word “sanctuary” had a more meaningful impact to legislators in Richmond.

Hughes said the Democratic majority is in the process of launching the “most egregious attack on the Second Amendment in the history of our republic.” Both of his comments drew strong applause from the audience.

Montgomery County on Monday night considered two resolutions, with one that would declare the locality a sanctuary. The other resolution would simply declare the county’s support of the Bill of Rights, including the Second Amendment as it stands.

More than 600 people came to the Montgomery County government center Monday night, easily making the supervisors meeting the most widely attended one in recent years.

Pulaski County joined nearly 100 other localities across the state in passing some type of resolution supporting the Second Amendment, all stemming from a blue wave that swept over Virginia in the November elections.

Nearly all of the 800 seats set up in Central Gym to accommodate the large turnout were filled with citizens donning “Guns Save Lives” stickers, which were also worn by many in attendance in Montgomery County.

Located behind Pulaski County’s administrative building where the monthly meetings are usually held, the gym was chosen Monday night after November’s meeting resulted in a large turnout when officials first discussed the resolution.

Board Chairman Andy McCready essentially guaranteed the passage of a pro-Second Amendment resolution during that meeting, stating the board just wanted to hear from constituents before drafting a document unique to Pulaski.

“This is truly a Pulaski County resolution … it’s a grassroots effort from the citizens,” he said.

Guthrie said the resolution — drafted by County Administrator Jonathan Sweet — was nearly perfect, save for the use of “supportive” over “sanctuary” in the initial draft. Sweet said he chose his wording carefully as to not lull citizens into a false sense of security.

Democrats picked up six seats in the House, giving them a 55-to-45 advantage, and flipped two seats in the Senate, resulting in a 21-to-19 edge in the November elections. Since then, Democratic legislators have already filed multiple gun safety bills ahead of January’s General Assembly session.

Pulaski County’s opponents of the proposed laws — which call for measures like universal background checks and keeping guns from those convicted of domestic abuse crimes, among others — have come out in droves proclaiming their support for Pulaski to join the ranks of Second Amendment sanctuary localities. The gun rights activist group Virginia Citizens Defense League has been a driving force behind the push for localities to adopt the “sanctuary” distinction across the state.

Despite the call by the league and citizens for localities to ignore any new gun laws passed after the first of the year, many officials, including those in Montgomery County and Pulaski, have warned that the “sanctuary” designation is merely symbolic as localities cannot supersede state or federal laws.

Pulaski Sheriff Mike Worrell, in a statement to supervisors, wrote that neither he nor any of his deputies “will enforce any law that is unconstitutional.” He declined further comment, making it unclear how his office would determine a law to be unconstitutional.

“We … appreciate and respect the tenants of the second amendment and intend to keep those rights in mind in the event that any criminal cases arise in which those rights may be affected. Any legislation that is clearly unconstitutional or declared unconstitutional by a court of competent jurisdiction will not be enforced by my office,” he wrote.

McCready, who lost his bid for reelection in November, told those in attendance to make sure they don’t avoid jury duty, so they can stand up for fellow citizens who they believe might be the victims of future gun laws passed by the state.

Various other residents spoke about how the English tried to take guns from settlers before the Revolutionary War. They said they may need those guns in the future in the event that a tyrannical government must be overthrown.

“I really do think we may be on the brink of another war. Things are getting so bad and it’s hard to say what may happen in the future,” said one speaker.

In Montgomery County, those who supported the sanctuary declaration argued that the bills currently being proposed could disarm many law abiding gun owners and lead to poorer safety.

“I think enforcing the gun laws we have is the right way to approach gun laws, and separating law abiding citizens from their guns is the wrong way,” Del. Joe McNamara, R-Roanoke County, said. “I see Montgomery County citizens who feel their Second Amendment rights are being infringed on.”

Regarding the point that the sanctuary designation is mostly symbolic, McNamara echoed a point by Montgomery County Supervisor Steve Fijalkowski on how such a resolution sends a much stronger message to Richmond.

“I say, symbolic or not, the message has to be made and it has to be made strongly to Richmond,” said McNamara, who wore a “Guns Save Lives” sticker on his sports jacket.

Those who spoke in favor of a sanctuary resolution included people who lived and worked in Blacksburg on the day of the April 16, 2007, shooting at Virginia Tech.

Christiansburg resident Jennifer Wolz, who’s a prosecutor, said she lost a student on that tragic day.

While she stressed that the Tech tragedy shouldn’t be employed for political reasons, Wolz said her experience in both criminal defense and criminal prosecution has led her to doubt the effectiveness of the currently proposed gun laws.

“Bad guys don’t follow the law, they don’t care what those black books in the library say,” Wolz said. “They aren’t going to care if there are stricter gun control laws enacted … They are going to use a gun to commit a crime if they want to.”

Wolz argued that stricter gun laws would do little against criminals who cross state lines to obtain weapons or go to the dark Web, where she said firearms trafficking is exploding. She voiced concerns about the currently proposed legislation negatively impacting “law abiding good guys with guns.”

There was, however, some considerable opposition to the sanctuary request.

Although they were outnumbered by those wearing the “Guns Save Lives” stickers, many wore yellow stickers that said either “Background checks save lives” or “Kindness Saves Lives.”

Linda Plaut, a Blacksburg resident, spoke about losses to gun suicides and argued that belongings, such as firearms, shouldn’t be prioritized over the safety of loved ones.

“I don’t set my love for any of my belongings above my love for family and friends,” Plaut said. “These are not bad guys with guns. These are good guys who are playing with something they are not in an emotionally good position to be handling.”

Beth Obenshain, president of Montgomery County’s League of Women Voters, said her organization supports “common sense gun laws” to protect the public. She also said that a sanctuary resolution would be unnecessary and would accomplish nothing.

“Gov. [Ralph] Northam’s legislative proposal for gun safety have all been legislated in other states and are proven pieces of legislation that save lives,” she said. “There’s no need for the hysteria that the governor or 2020 General Assembly are going to undermine the Second Amendment.”

Megan Doney, a Christiansburg resident and a professor at New River Community College, said the county’s history with college campus shootings should make the locality more receptive to tougher stances on gun crimes. She recalled the shooting that occurred at NRCC’s Christiansburg mall site several years ago and spoke about the trauma that left on students and employees.

“It’s purely symbolic,” Doney said about a sanctuary designation. “I ask the board to consider what a Second Amendment sanctuary designation will symbolize to those who continue to suffer the lasting trauma of violence, in a county that’s suffered two school shootings.”

Montgomery County board opts for 2nd Amendment support — but not sanctuary

CHRISTIANSBURG — In front of a largely pro-gun crowd early Tuesday morning, the Montgomery County Board of Supervisors chose on a 4-3 vote not…

An overflow crowd attended the Montgomery County Board of Supervisors meeting than ran into early Tuesday morning.

In front of an overflow crowd, the Montgomery County Board of Supervisors began a public comment period addressing the Second Amendment sanctuary topic Monday night.