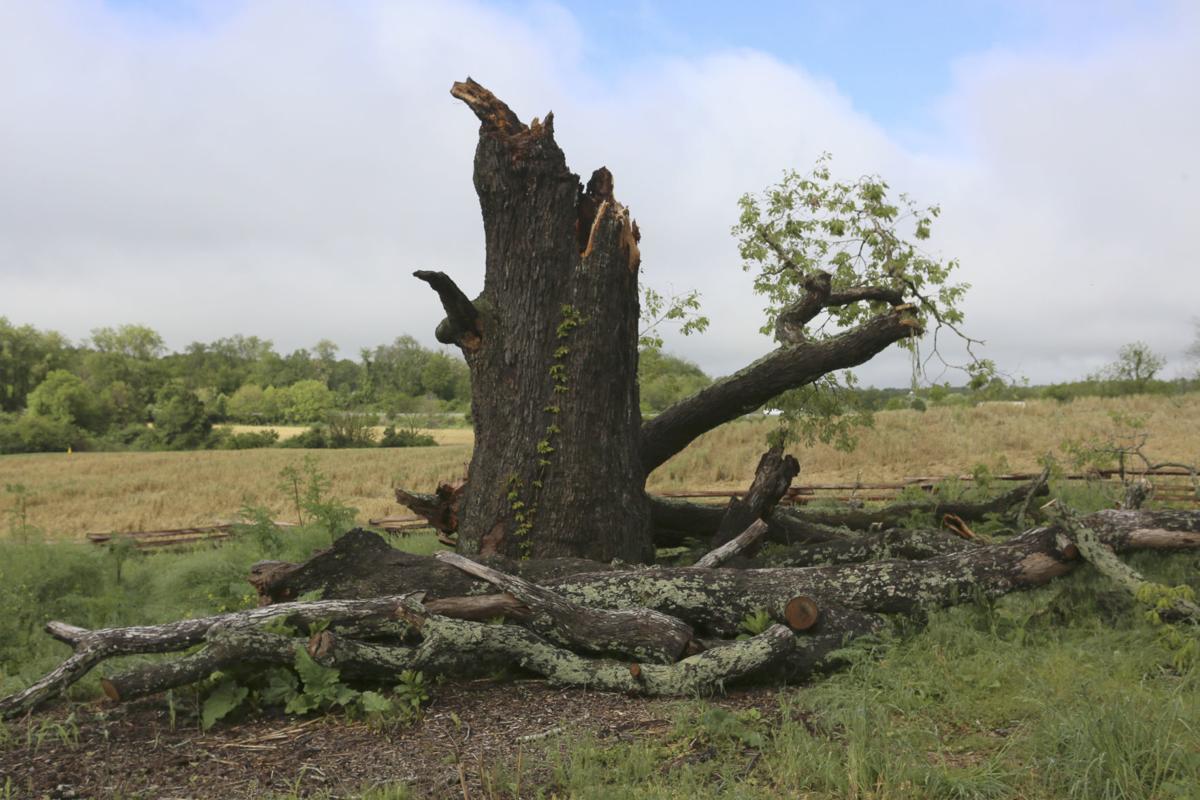 The Merry Oak, located on the grounds of Smithfield Plantation, was claimed by a storm early on May 19. The tree, a white oak, was approximately 350 to 450 years old and held significant historical importance to the enslaved people at Smithfield Plantation nearly 250 years ago, as well as their descendants. 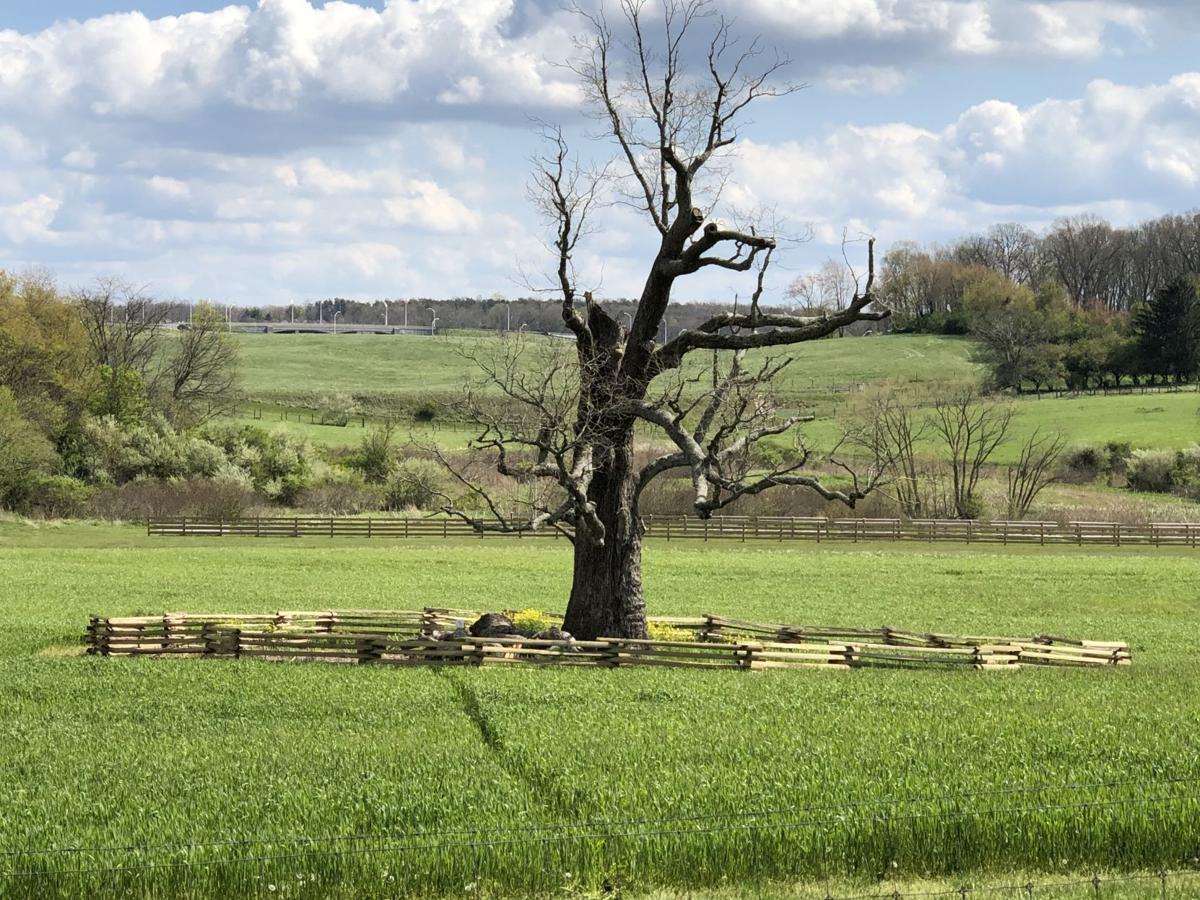 A photo of the Merry Oak before it was cut down by a storm.

Monday, June 1, 2 p.m. The Merry Oak at Smithfield Plantation was destroyed by a storm on May 19. The date was incorrect in the May 31 New River Valley section. The story has been updated.

Before the English or the Scots-Irish arrived.

Before enslaved Africans were brought in chains to build Smithfield Plantation.

Before the United States existed, and long, long before Virginia Tech, there was the Merry Oak.

Over four centuries, a regal white oak tree grew and stood sentinel along what is today U.S. 460 — until a powerful storm destroyed it on May 19.

The tree, owned by Tech, had been suffering for a few years now, shedding the branches that sheltered Kerri Moseley-Hobbs’ ancestors and others held as slaves at Smithfield. There the enslaved community gathered away from their white masters for celebrations, for worship, for comfort, for merriment — the joy that gave the tree its name.

The tree’s importance to those descendants has been celebrated in recent years by Historic Smithfield, a museum and 13-acre re-creation of 18th century life on the Appalachian frontier. And the Smithfield Preston Foundation Board of Directors, on which Moseley-Hobbs serves, is working on a plan to memorialize its passing and preserve the stories it represents.

“We lost a grandma,” Moseley-Hobbs said of the ancient oak. “It’s like the grandma where you knew that she was old and she was going to leave soon, but it’s still sad to see her go.”

The Merry Oak may have died, but it will live on in more than memories. In fact, it may still have a future.

About three weeks before the storm took down the Merry Oak, Peter Sforza went out with camera and lasers to digitally map it for posterity. Sforza, who directs Virginia Tech’s Center for Geospatial Information Technology, has been digitally preserving important trees in Blacksburg since the 1990s.

The Merry Oak “serves as sort of an interconnection point of many things, many stories,” Sforza said. “Putting it into a digital preservation allows it to persist in a way that we can start to tell these stories and collect them and preserve them and appreciate them over these long timescales.”

Smithfield was a large plantation established by the American patriot family of Col. William Preston, and his wife, Susanna, in what is today Blacksburg. Their descendants became governors of Virginia and established a college that would become Virginia Tech.

Moseley-Hobbs discovered the Merry Oak and its connection to her family about four years ago when she traveled to Smithfield from her home in Baltimore for genealogical research. She has since published a book based on her research titled “More Than a Fraction.”

Moseley-Hobbs hails from the Fraction family, whose history at Smithfield extended from slavery during the plantation’s early years to beyond emancipation and included a feud with the Prestons that eventually drove the Fractions of out Montgomery County.

Since discovering those stories, Moseley-Hobbs has brought other descendants of the enslaved to Smithfield to tour the grounds and learn about the Merry Oak. Many of them felt an immediate attraction to the tree, she said. And on learning its connection to their forebears, some have broken down in tears.

Moseley-Hobbs said she knew from an arborist’s report on the tree that it was in decline, but its swift end was a shock.

“When they told me, I had got so attached to the tree that I had to really focus on what it represented,” Moseley-Hobbs said. “I offered a prayer: if the tree needs to go, it can go.”

The Fractions, today spread across the U.S., have since had a family conversation about the Merry Oak’s demise. There was a consistent feeling among them, Moseley-Hobbs said. “I hate to see it go, but that space is so much more than just the tree. So we can focus on the spirit, the space, the message and what it represents at this point.”

Today the historic grounds and the 1774 Preston mansion are surrounded by the university. Technically, the Merry Oak belonged to Tech, living out its days in a cornfield used for research, and the two institutions have worked together to try to preserve the tree and publicize its story.

The university erected a fence around it and campus arborist Jamie King evaluated it. According to King, it was nearing the end of its life and had structural problems that couldn’t be fixed.

For its part, Smithfield has integrated the tree’s image into its offerings and created an interactive exhibit about its role as a refuge for the enslaved, executive director Ryan Spencer said. And it has become more well known in the wider community.

When news spread that it was dead, people took to social media to post their memories and photos of the tree, Spencer said. “It’s been heartening to see.”

Spencer said a meeting is set for next month to get ideas from descendants, the university and the museum for memorializing the tree and all it represents.

The spirit left behind

Peter Sforza’s connection to the oak goes back to his student days.

“I used to go there as an undergrad and walk a dog there,” Sforza said. “Later on in grad school, I was part of agriculture and plant pathology — we planted crops there. I was working around that tree and we revered it and respected it.”

Now a research scientist using technology to uncover, preserve and tell meaningful stories, when Sforza found out the Merry Oak was coming to the end of its life he said he rushed out to preserve it as a digital object.

“There are a lot of creative ways we can use it,” Sforza said. “I’m excited to see what others are thinking as well.”

The digital mapping could be used in simple ways, like 3-D printing scaled models of the tree to offer as mementos, or in complicated ways like integrating it into other digital mapping or virtual world projects that explore the past and the future, Sforza said.

But the idea overall is to find ways to preserve and tell the stories of the past and help create meaning in the future.

“There’s so much to uncover there, and so much we don’t know,” Sforza said. “To make invisible meanings tangible, tell stories and share stories — that’s how I want to use technology.”

Moseley-Hobbs said her family is dedicated to preserving the memory of the Merry Oak and its importance to all those who have been touched by it.

“We look forward to the support of everyone as we figure out what’s the best way to memorialize not just the tree,” she said, “but what it represents and the spirit it leaves behind.”

The Merry Oak, located on the grounds of Smithfield Plantation, was claimed by a storm early on May 19. The tree, a white oak, was approximately 350 to 450 years old and held significant historical importance to the enslaved people at Smithfield Plantation nearly 250 years ago, as well as their descendants.

A photo of the Merry Oak before it was cut down by a storm.