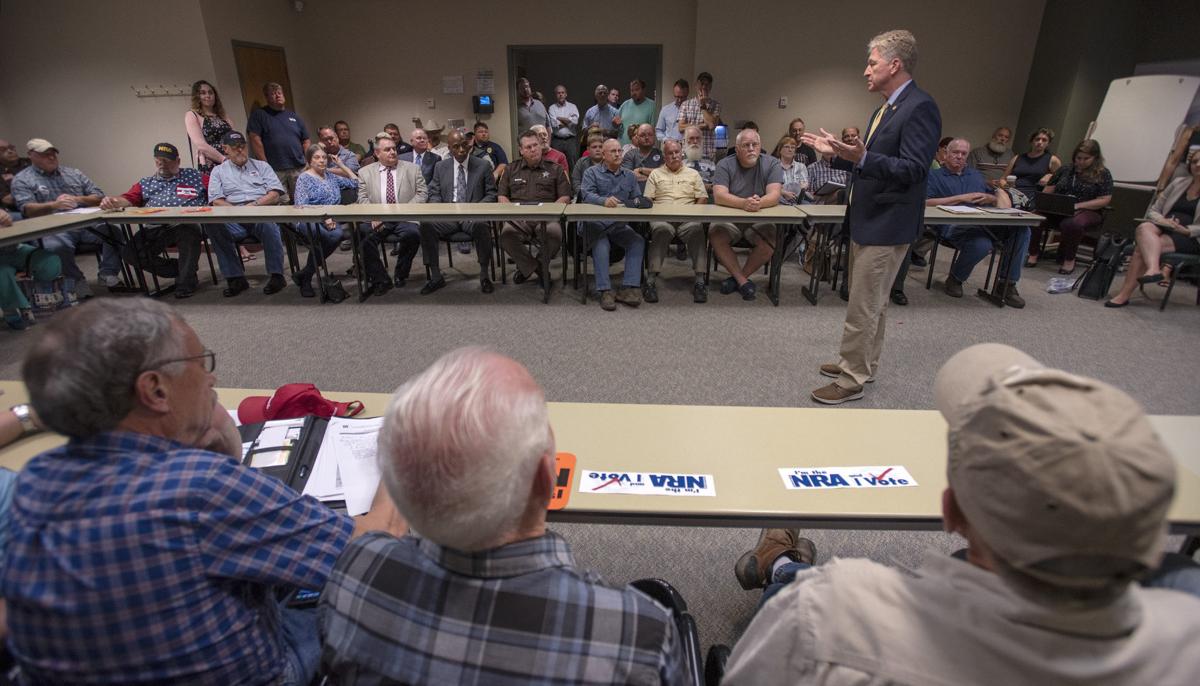 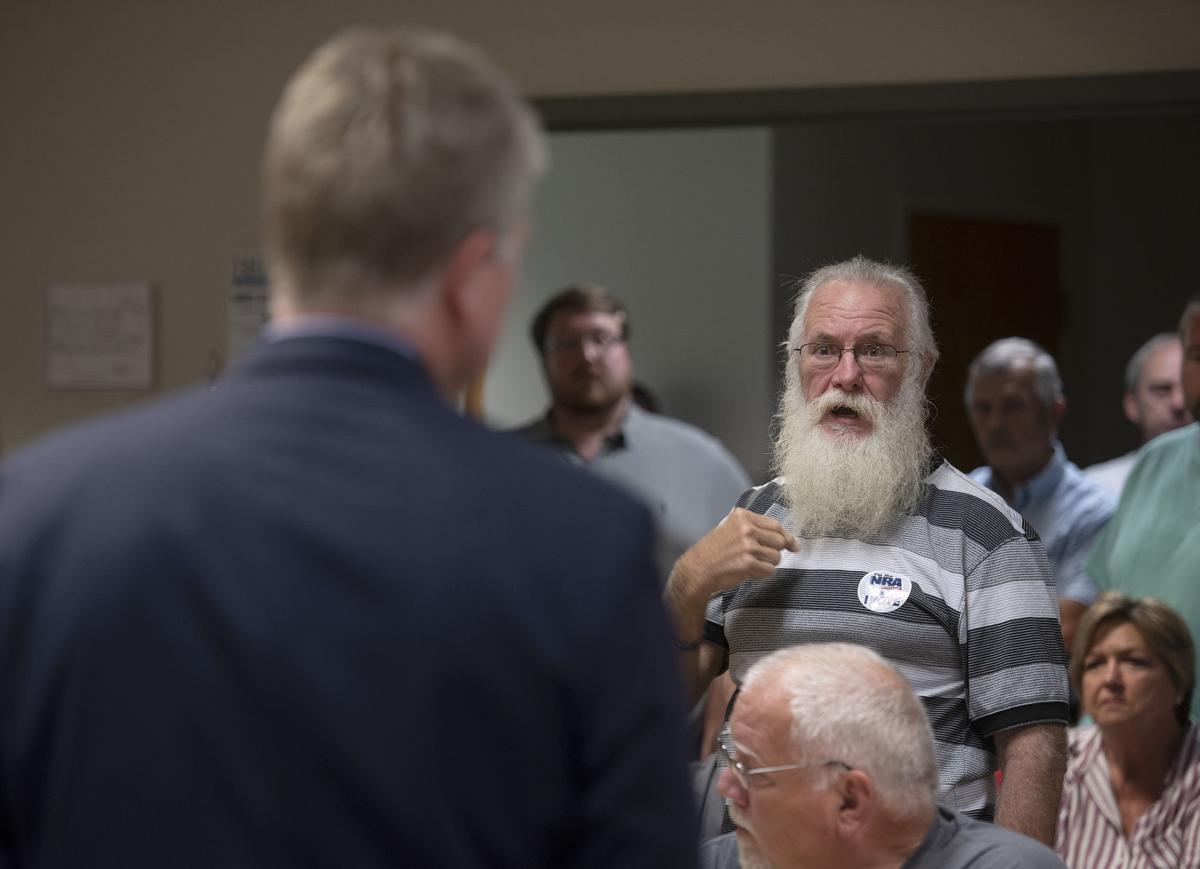 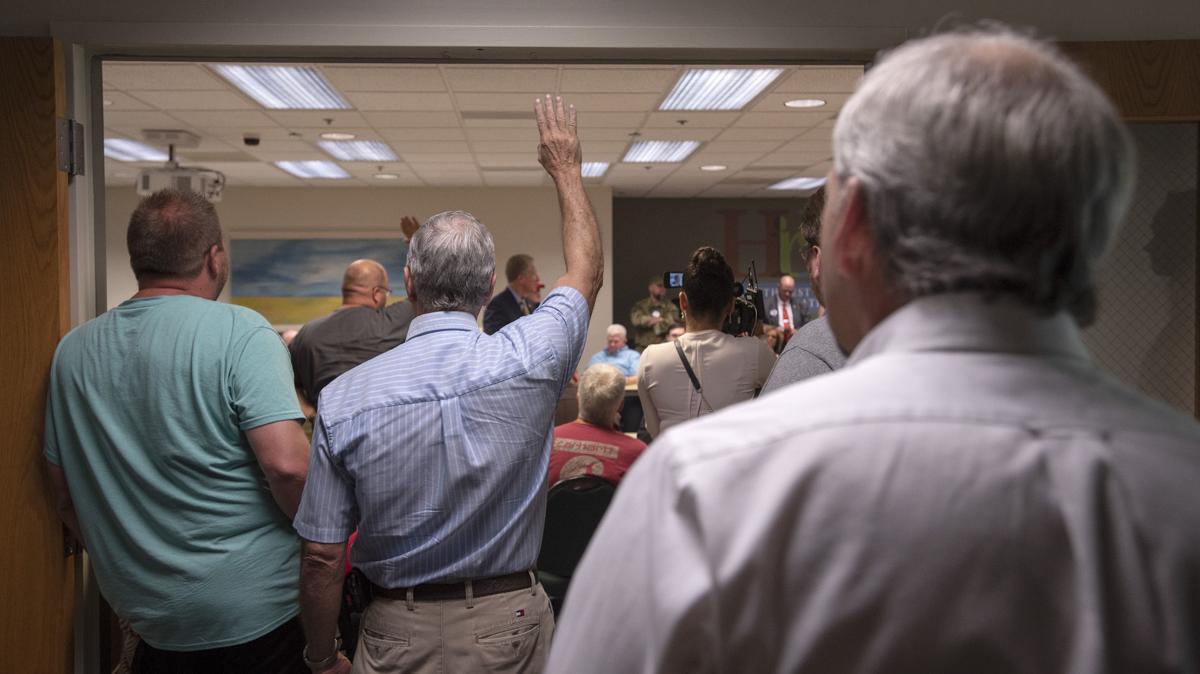 A standing-room only crowd listens from outside the door during a roundtable discussion on gun violence prevention Tuesday afternoon in Abingdon. 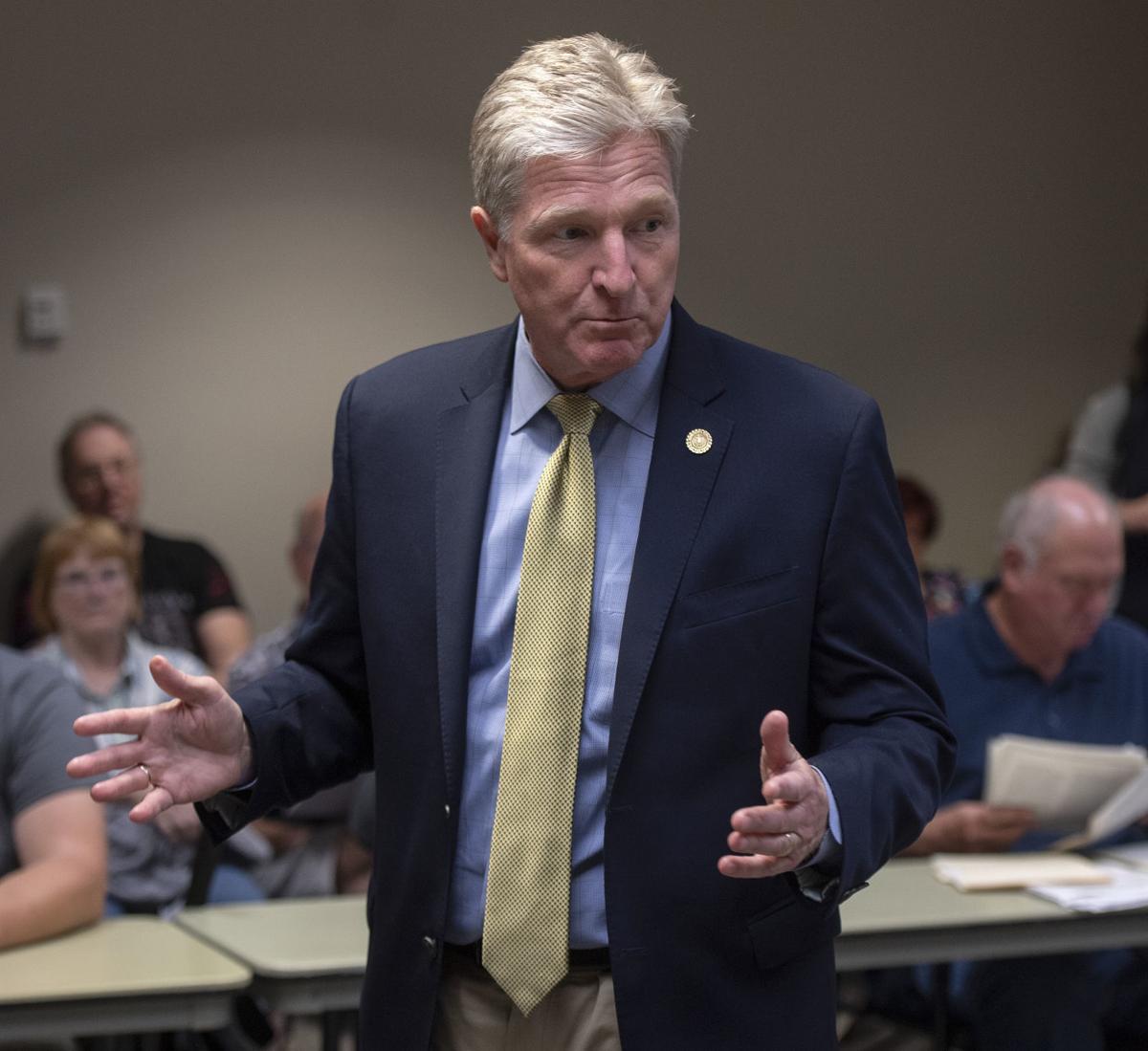 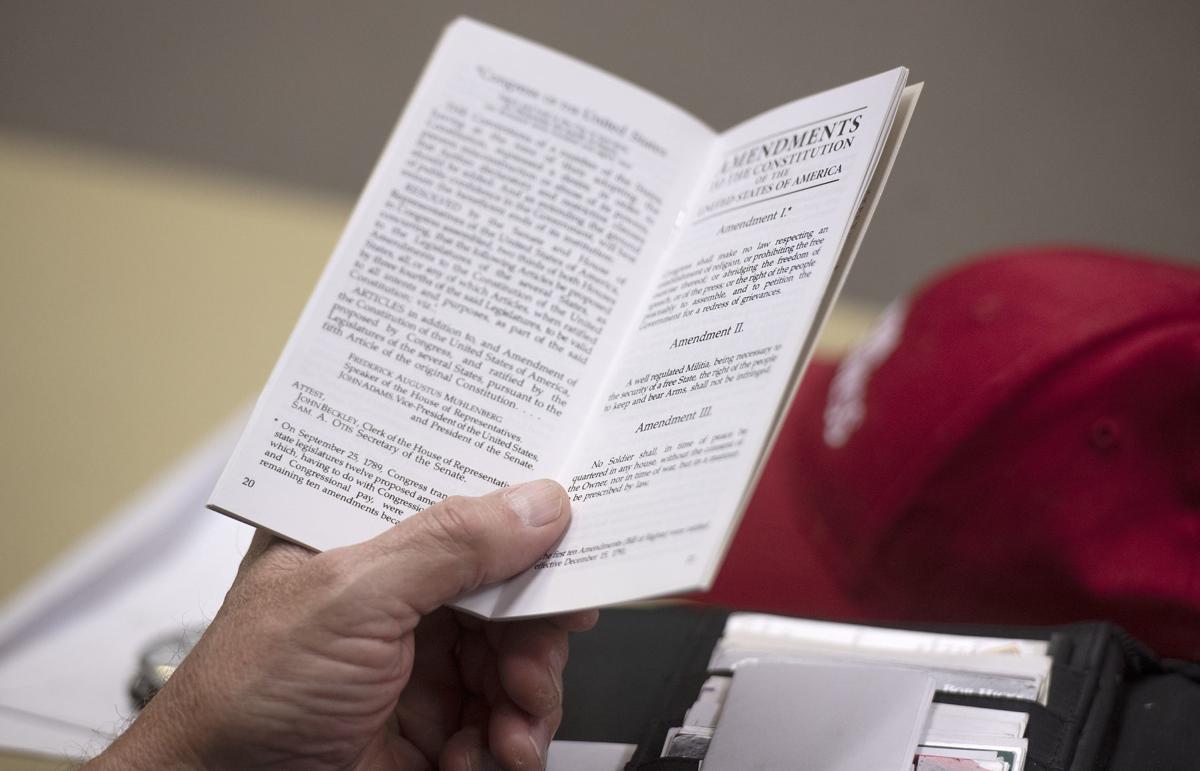 A member of the public reads the Second Amendment during Tuesday’s roundtable discussion on gun violence. 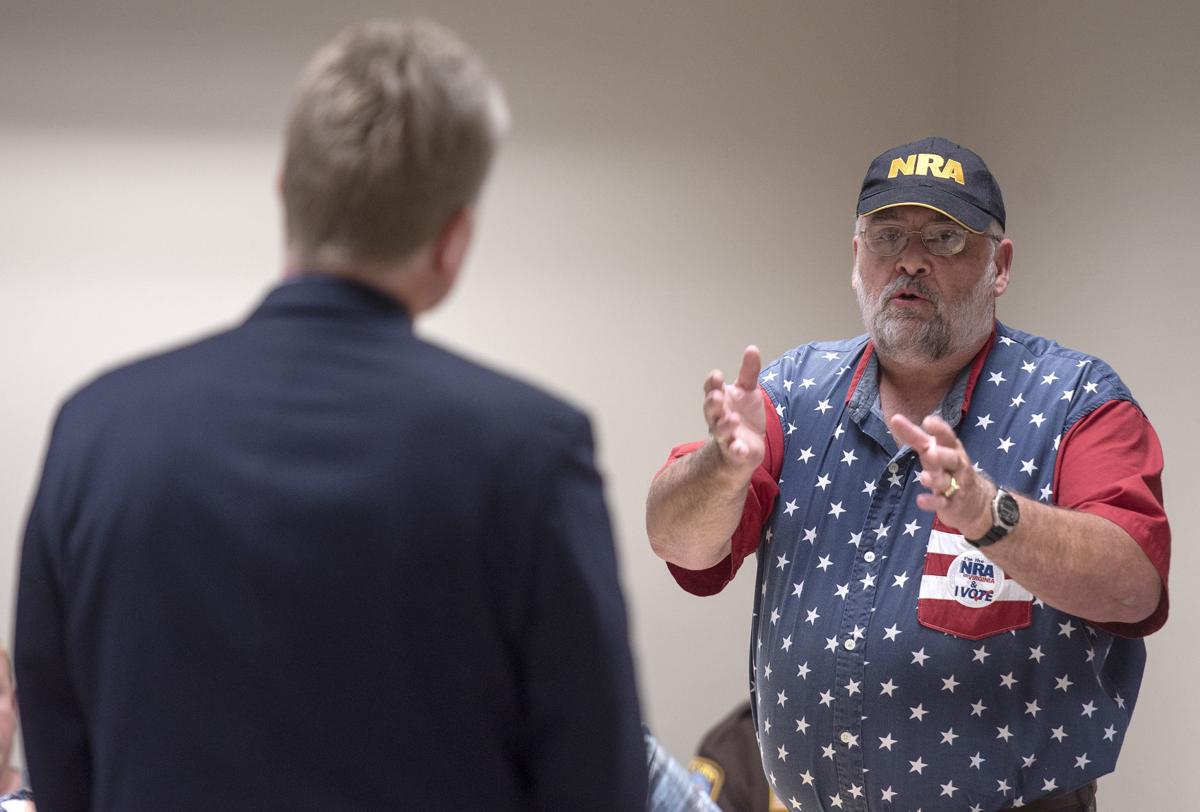 In the aftermath of the mass shooting in Virginia Beach, Gov. Ralph Northam has called a special session of the General Assembly on July 9 to take up a package of proposals dealing with the state’s gun laws. As part of the run-up to that, administration officials have fanned out across the state to hold a series of roundtables. Secretary of Public Safety and Homeland Security Brian Moran (left) attended one on Tuesday in Abingdon. It’s fair to say he got a hostile reception. Our editorial at left lists eight questions we have as a result of that rowdy forum. 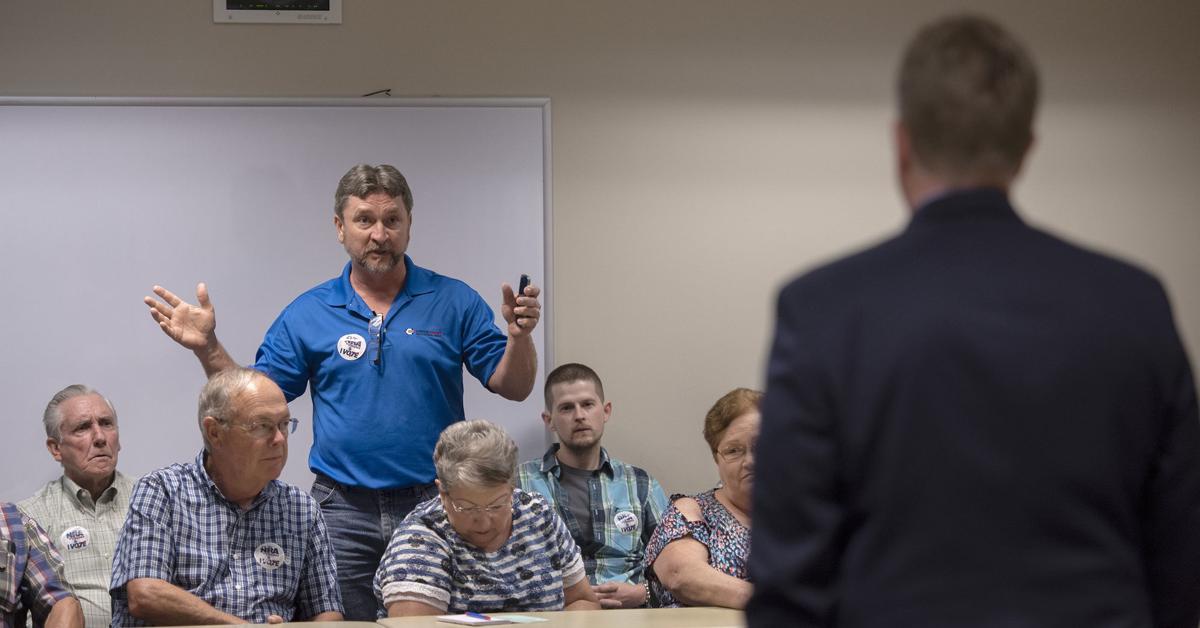 ABINGDON — A roundtable in Southwest Virginia about gun policy on Tuesday started with an audience member’s recitation of the Second Amendment.

From there, residents passionate about gun rights peppered Brian Moran, Virginia’s secretary of public safety, with concerns about an upcoming special session in which the General Assembly will take up gun control proposals.

“You are chipping away at people’s gun rights,” a woman told him.

Gov. Ralph Northam, a Democrat, called for the General Assembly to convene July 9 in the wake of the May 31 mass shooting at the Virginia Beach Municipal Center that left 12 people dead. Northam’s seeking measures including universal background checks, a ban on assault weapons, a ban on high-capacity magazines, and the restoration of a state law to restrict handgun purchases to one a month.

Northam is also interested in legislation requiring people to report stolen or lost guns within 24 hours as well as extreme risk protection orders. Extreme risk protection orders allow a third party — in Virginia, Moran said this would be a police officer or prosecutor — to petition a judge for a warrant to seize legally owned guns if someone is determined to be an immediate threat to themselves or others. Research has shown the measure to be promising in reducing suicides by firearm.

“This is confiscation without representation,” one man said about extreme risk protection orders. “What you’re proposing is not about guns, it’s about control.”

Another man was concerned that if the age was increased to 18 to be able to access firearms, children wouldn’t be able to hunt with their parents.

The Northam administration organized six roundtables throughout Virginia in advance of the special session. Tuesday’s session in Abingdon — a town in the most conservative part of the commonwealth — was the only one in Western Virginia.

The crowd rebuked Moran for being a “liberal” and for Northam and Democrats trying to exploit a tragedy for political gain. People often talked over one another and interrupted others speaking.

About 50 people packed a room at the Southwest Virginia Higher Education Center. The high attendance followed a social media push by Sen. Ben Chafin, R-Russell, for gun-rights supporters to show up.

“Out in this part of Virginia, we’re not going to stand for it,” one man told Moran.

At the roundtable, Chafin said the governor’s call for a special session was designed as a political stunt. Northam is still pushing through a scandal that followed after the revelation in February that a photo appeared on his page in his 1984 medical-school yearbook showing a man in blackface and another in a KKK costume.

“I’ll oppose every single thing you got,” Chafin told Moran.

Del. Chris Hurst, D-Blacksburg, whose girlfriend, WDBJ-7 reporter Alison Parker, was shot and killed on live television in 2015, assured the room that law-abiding, responsible gun owners won’t be affected by the proposals.

“You’re a fraud!” one man shouted at Hurst after the meeting ended.

Hurst expressed frustration after the meeting, saying he didn’t believe the people who turned out to the roundtable were an accurate representation of the people in the region.

“A senator put out a call to action and what was supposed to be a policy roundtable turned into political theater,” Hurst said.

The crowd pushed back against just about everything Moran had to say. Those opposed to the proposals suggested instead getting rid of gun-free zones and bolstering funding to law enforcement so they can hire more officers.

Kristina Morris was one of the few who was pleased the legislature was considering gun control legislation as long as responsible gun owners didn’t have their rights infringed. She said her cousin was shot to death in Tennessee in 1992. Holding up newspaper articles, she rattled off incidents in Southwest Virginia involving guns that have happened in the two weeks since Northam called for the special session.

“There are people out here that are going to harm us,” she said.

A man yelled to her to get a gun.

With a Republican senator and Democratic delegate recently resigning from their posts to take jobs in the Northam administration, Republicans will hold a 20-19 majority in the Senate and 51-48 majority in the House of Delegates.

Attorney General Mark Herring, a Democrat, said Tuesday in an interview that he’s “cautiously optimistic” some sort of gun control legislation will emerge from the special session.

“Can we really say in Virginia we’re doing everything we can to prevent gun violence?” Herring said. “The truth is no.”

He acknowledged these proposals have died in committees or subcommittees every year during legislative sessions. He said he hopes the bills will reach the floors of the House and Senate for a vote rather than lawmakers burying them in panels away from a watchful public eye.

“Twelve years ago, after the horrific shooting at Virginia Tech, politicians in Washington and Richmond said the right things: ‘We’ll remember, we’ll never forget, we have to do something,’” Herring said. “And yet 12 years later, nothing has changed.”

RADFORD — Gov. Ralph Northam stumbled into the middle of a gun debate Friday, not with seasoned politicians in Richmond but rather teens at th…

Gov. Ralph Northam on Wednesday rolled out his final list of gun control measures he wants legislators to take up next week during a special s…

Lawmakers to return to Richmond for special session on guns

Lawmakers are returning to Richmond on Tuesday for a special session called by Gov. Ralph Northam to take up gun-related measures in the wake …

Northam sets July 9 as date of special session on guns

The special session that Gov. Ralph Northam called on gun control is scheduled for July 9, according to a proclamation he signed Friday.

A standing-room only crowd listens from outside the door during a roundtable discussion on gun violence prevention Tuesday afternoon in Abingdon.

A member of the public reads the Second Amendment during Tuesday’s roundtable discussion on gun violence.

In the aftermath of the mass shooting in Virginia Beach, Gov. Ralph Northam has called a special session of the General Assembly on July 9 to take up a package of proposals dealing with the state’s gun laws. As part of the run-up to that, administration officials have fanned out across the state to hold a series of roundtables. Secretary of Public Safety and Homeland Security Brian Moran (left) attended one on Tuesday in Abingdon. It’s fair to say he got a hostile reception. Our editorial at left lists eight questions we have as a result of that rowdy forum.