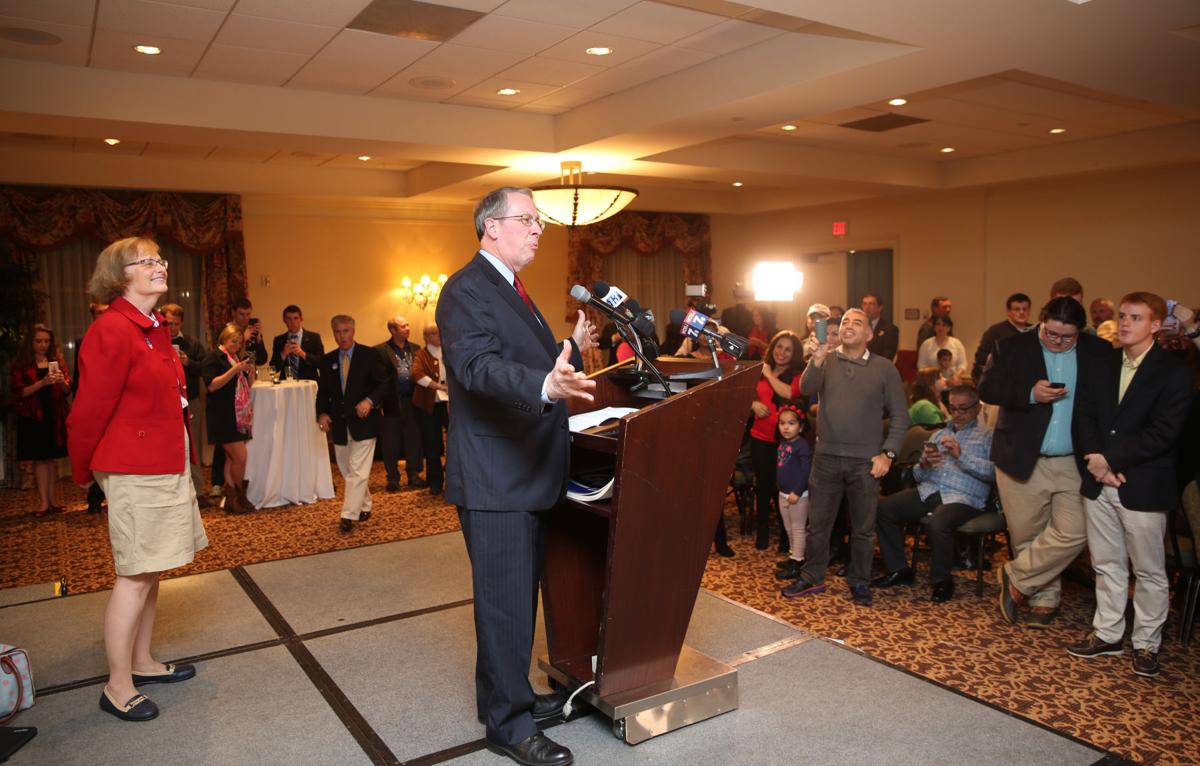 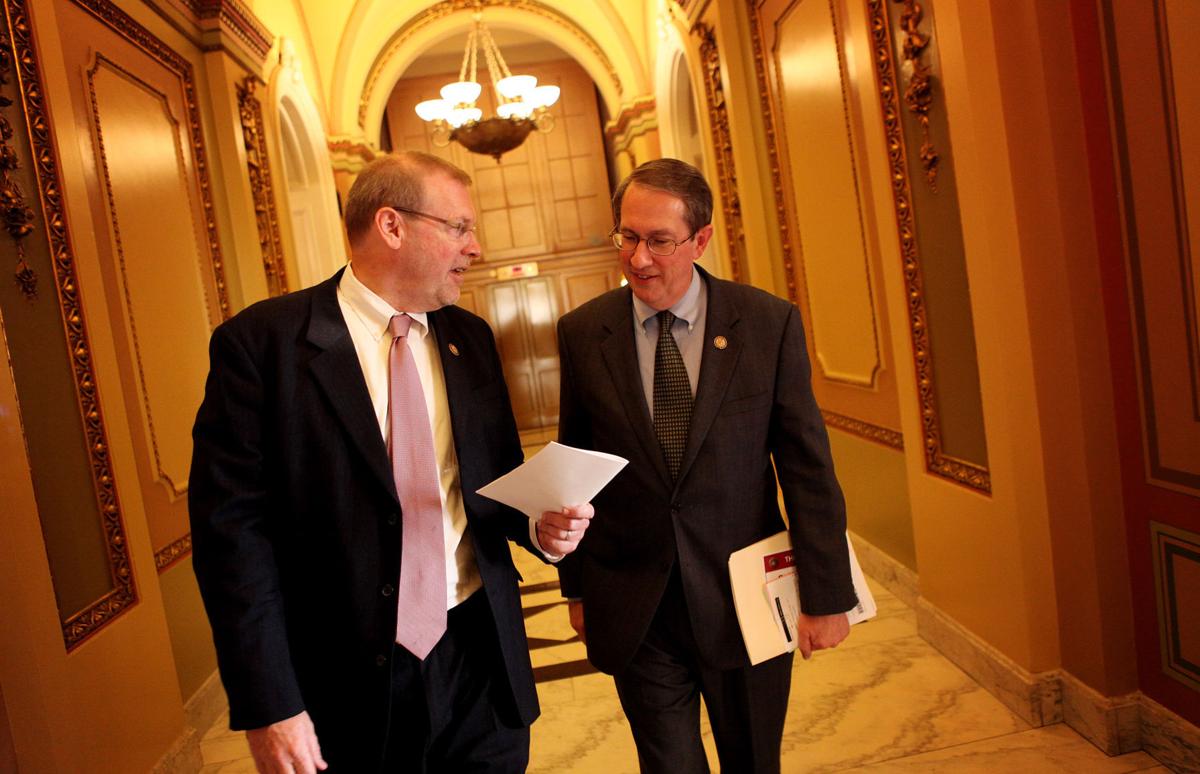 Rep. Morgan Griffith (left), R-Salem, walks through the halls of the U.S. Capitol with Rep. Bob Goodlatte, R-Roanoke County, on their way to a vote. 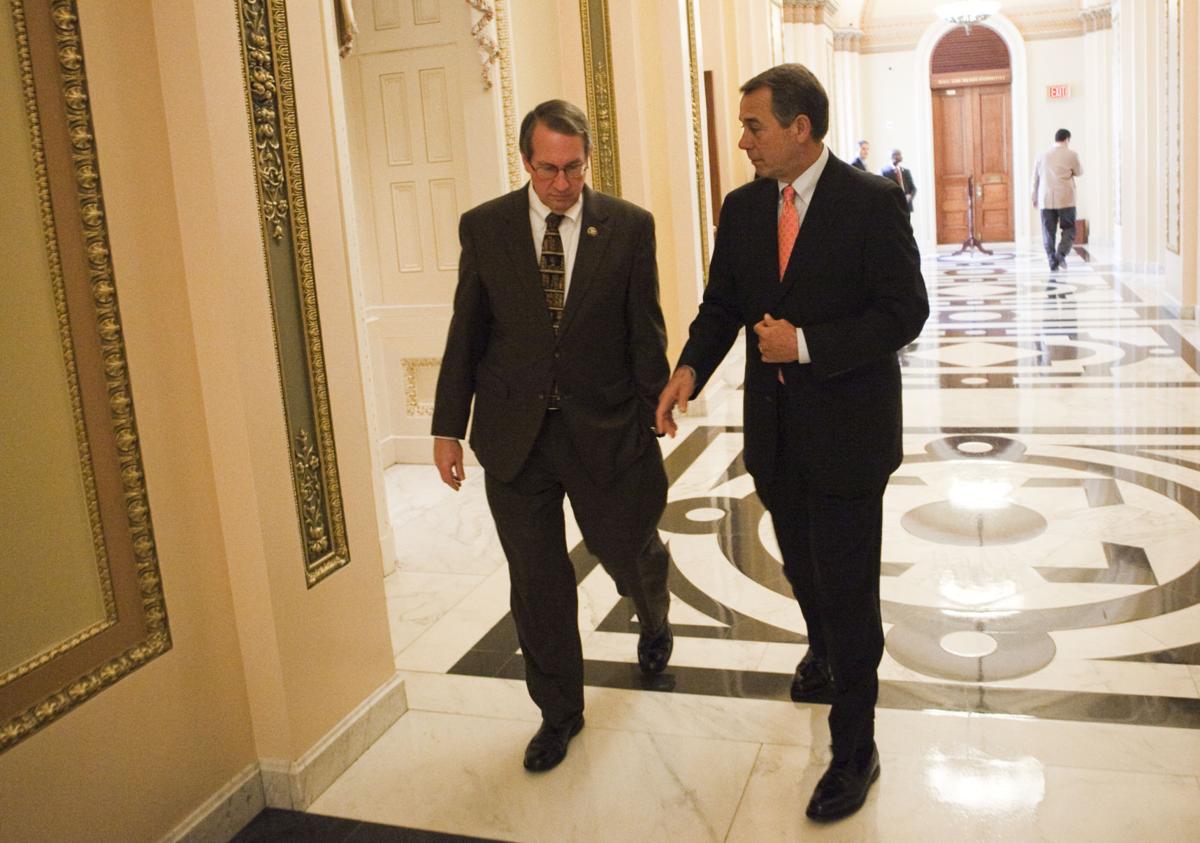 Rep. Bob Goodlatte and John Boehner, then speaker of the House-designate, speak while heading to a vote in the Capitol in December 2010. 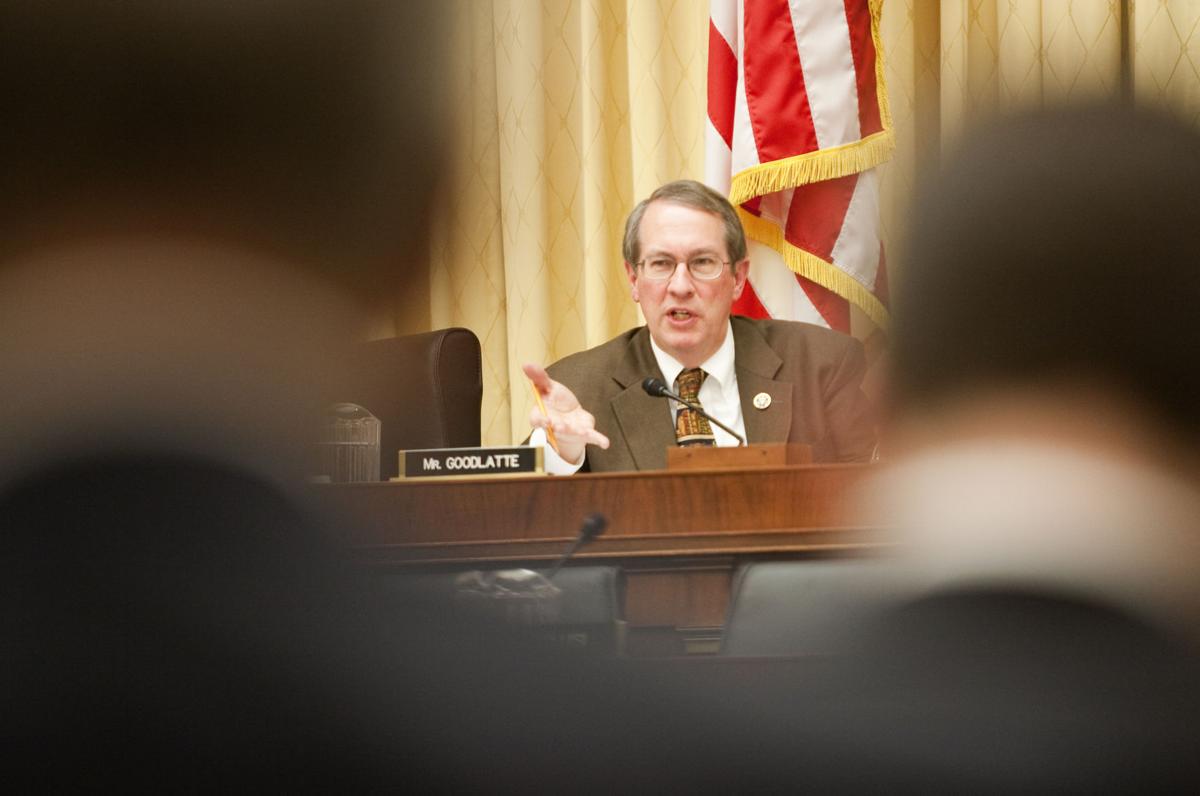 Bob Goodlatte’s own Republican Party didn’t seem to want him at first.

GOP leaders in the 6th Congressional District were more drawn to the flash of a former college quarterback named George Allen.

In 1992, Allen was already a congressman from Albemarle County but his seat had been eliminated by redistricting, and 6th District Republicans were trying to woo him to move and run against Democratic incumbent Jim Olin of Roanoke.

But Allen moved too slowly. Goodlatte, a former college chess champion, outmaneuvered the old quarterback, lining up support across the district, winning the nomination, and ultimately the election.

Voters have kept the congressman from Roanoke County around for 13 terms — despite his own initial promise to serve only six.

On Thursday, Goodlatte, 64, announced he was taking his leave at last, saying he would retire and not seek re-election in 2018.

“This is something my wife and I have considered very carefully and very prayerfully for a while,” Goodlatte said on a conference call with reporters from his district Thursday. He and Maryellen Goodlatte, a Roanoke attorney, decided to make more time together and for their children and grandchildren, he said.

He also cited the end of his chairmanship of the House Judiciary Committee in 2018 due to term limits.

Goodlatte said they made the decision and began setting his retirement in motion a week ago. He waited to make an announcement until after the election.

Colleagues on the right and left thanked Goodlatte for his service and praised him Thursday.

Rep. Morgan Griffith, R-Salem, said Goodlatte “has been an influential lawmaker and a strong advocate for Virginia.”

“While Bob and I didn’t see eye to eye on everything, we worked together for our constituents on local issues,” Sen. Tim Kaine said.

When Goodlatte was first elected in 1992, he flipped a district that had been held by a Democrat for 10 years. Olin, who opted not to run, had himself flipped the seat after Republicans held it for 30 years.

The last of them was Caldwell Butler of Roanoke, who counted a young Goodlatte among his proteges.

Goodlatte was from Massachusetts and attended Bates College in Maine. Law school at Washington and Lee University brought him to Virginia.

Almost immediately after graduating, he went to work for Butler as his district office manager.

Goodlatte won his first election by 20 points. That’s the closest an opponent has ever come to him, though he’s had many challengers over the years .

In Congress, Goodlatte soon carved out a place for himself.

He was an early champion of legislation regarding technology.

On Thursday, Goodlatte brushed aside questions about his legacy, but he did cite the 1998 Internet Tax Freedom Act among his proudest moments. The law bars taxes on internet access and internet-only taxes, and blocks multiple taxes on electronic commerce.

In 2003, Goodlatte was appointed chairman of the House Agriculture Committee, making him the first congressman from Roanoke to hold a congressional committee chairmanship.

The job put Goodlatte at the center of creation of the annual farm bill, which has wide ranging impacts from subsidies for local farmers to international trade.

Goodlatte drew little attention to himself in the job, until he caught the ire of horse enthusiasts for holding up passage of the American Horse Slaughter Prevention Act. The bill ultimately passed easily in the House but died in a Senate committee.

In 2005, Goodlatte played a key role in winning funding for Roanoke’s proposed flood control project. The project has dramatically reduced flooding in the city and also made way for the immensely popular Roanoke River Greenway. Then-Mayor Nelson Harris praised Goodlatte as the “workhorse” who got the funding through.

Six years later, Goodlatte was the leading critic of federal funding for a different Roanoke project — the renovation of the Poff Federal Building.

Goodlatte railed against the ballooning costs of what became a more than $60 million project that’s still not complete. It was funded as part of the federal stimulus package aimed at halting the economic recession.

Goodlatte also served on the powerful Judiciary Committee, and became a key player in proceedings to impeach President Bill Clinton.

Years later, however, he would reject calls from within his own party to seek impeachment of President Barack Obama.

Goodlatte rose to chairman of the Judiciary Committee in 2012. He was just the fourth Virginian to hold the position.

Goodlatte cited his role in passage of the USA Freedom act while Judiciary chairman as a career highlight Thursday.

The 2014 law followed a storm of questions about federal government surveillance raised by the leaks of documents by former government contractor Edward Snowden.

The act ended bulk collection of data by government intelligence and law enforcement agencies. Goodlatte praised it as a civil liberties protection.

Another of Goodlatte’s actions as Judiciary chair, however, drew criticism from local government officials and retail business owners — his smothering of the Marketplace Fairness Act.

The act, which easily passed the Senate, was designed to capture sales tax revenue often not collected on internet sales. Proponents of the law said online retailers evasion of collecting sales taxes put bricks and mortar store retailers at a competitive disadvantage on pricing.

Goodlatte said he recognized the need for a remedy, but didn’t like how the Senate bill achieved it.

Goodlatte’ s final term got off to a rough start when he launched an effort to overhaul the Office of Congressional Ethics, undermining its independence and stripping its ability to investigate anonymous claims.

When the proposal hit the light of day, Democrats and some Republicans opposed it. After newly minted President Donald Trump tweeted his displeasure with it, most of the party backed away from it. Goodlatte protested it had been misrepresented.

Goodlatte has remained supportive of Trump, even to the point of controversially allowing his staffers to aid in the drafting of the president’s troubled executive order banning immigration from several majority Muslim countries.

Goodlatte, however, largely avoided much of the anti-Trump backlash aimed at other Republicans by declining to host in-person town hall meetings with constituents. He hosts periodic telephone town halls instead.

On Thursday, Goodlatte plainly eschewed being reflective on his time in Congress, insisting he focus on the “tremendous amount of work” left to do in his remaining 14 months. He mentioned immigration reform and criminal justice reform.

Beyond that, he’s not so sure. During his press call Thursday, he described his retirement as an end to his time in Congress or the end of his service, but he didn’t address a specific question about running for the U.S. Senate.

He said part of the reason for his retirement was “so that I can do something else,” but he added, “I don’t know what that is yet.”

Democrats say they're ready to take on Cline in 6th District

Four Democrats seeking the nomination for the 6th Congressional District said at a forum Tuesday that they’re ready to take on Del. Ben Cline …

Rep. Morgan Griffith (left), R-Salem, walks through the halls of the U.S. Capitol with Rep. Bob Goodlatte, R-Roanoke County, on their way to a vote.

Rep. Bob Goodlatte and John Boehner, then speaker of the House-designate, speak while heading to a vote in the Capitol in December 2010. 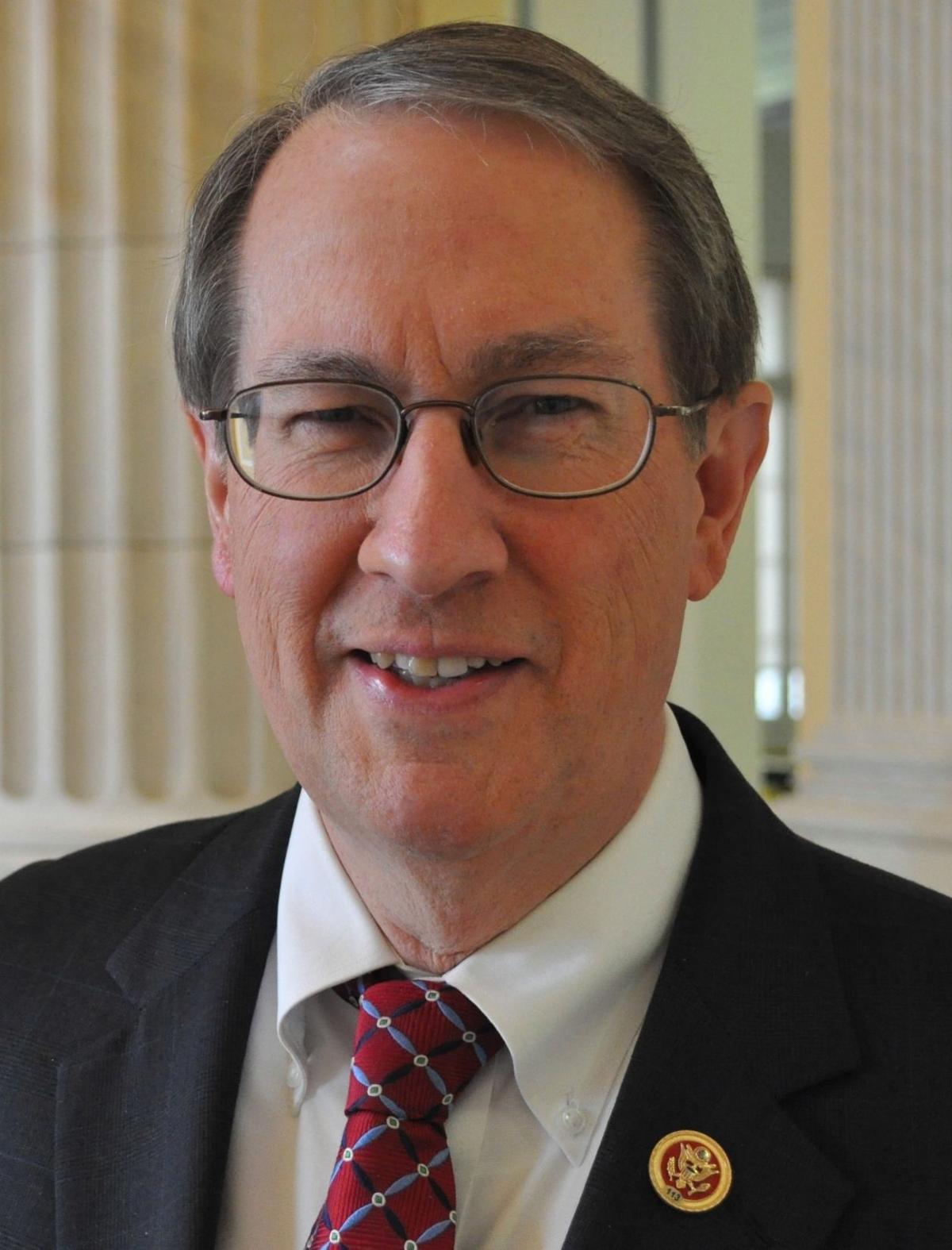