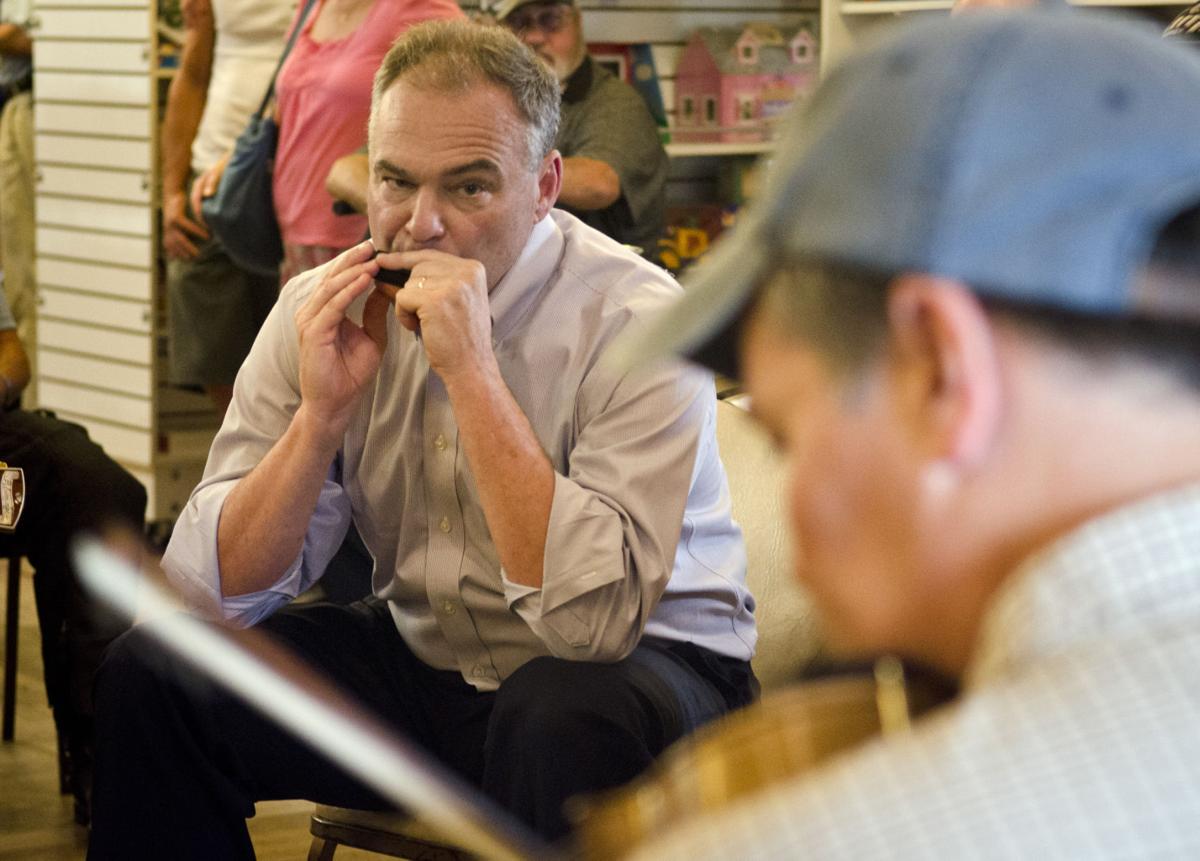 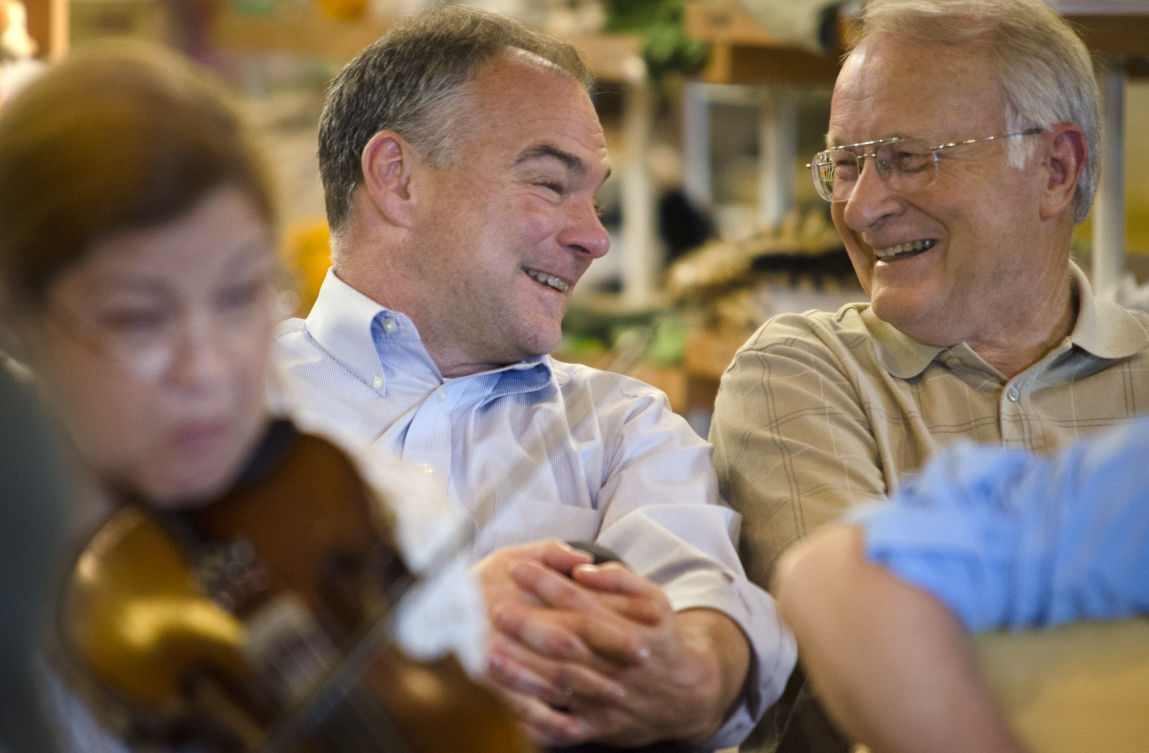 Sen. Tim Kaine chats with Victor Zitta as he enjoys music during the jam in Floyd.

“You never know when you’re going to get a chance to play,” the freshman U.S. senator from Virginia says, dumping three instruments onto his uncluttered office desk before picking one up to honor a request for a tune.

He warms up with a few chords of blues but then breaks into an early Beatles classic with a catchy harmonica intro — “Love Me Do.”

“You can see how hard we work in the Senate when we have the opportunity to play harmonica in the office,” Kaine says sardonically, flashing his trademark mischievous grin. “Good acoustics in the Russell Building.”

Kaine is self-taught and can’t read music. But he’s played with the likes of Boyd Tinsley, Bruce Hornsby, Ricky Skaggs, Dan Tyminski and the Cary Street Ramblers, who were onstage Saturday at a Democratic Party of Virginia fundraiser honoring the 10th anniversary of his 2005 election as governor.

And three years into his latest gig, he is singing a happy tune.

In short order, Kaine has managed to carve out a niche in the Senate on issues grounded in several key committees — Armed Services, Budget and Foreign Relations.

He was a conferee on the recently passed two-year federal budget; advocated for veterans’ employment; and has occasionally clashed with his friend, President Barack Obama, on foreign policy as it pertains to Syria and the Iran nuclear deal.

“I really like the job,” Kaine said during an interview. “I feel like I’m doing some good things just being around for a couple of years, so if I stay around [longer], I can really do some good things.”

And as he was in 2008, Kaine is likely to be on the short list of potential vice presidential running mates for the next Democratic presidential nominee — something the senator insists is not on his playlist.

“I want to be John Warner, is what I want to do,” he said, referring to the retired Virginia Republican who served in the U.S. Senate for 30 years.

“I really like what I do. The Senate is a seniority place, but you can do more and more the longer you’ve been around.”

Not long ago, Kaine wasn’t convinced that he wanted to hang around in politics.

His hope was to end up as the president of a Virginia college or university — or at least as a popular professor at the University of Richmond’s law school.

Instead, he somewhat reluctantly was drafted to run for the Senate when Sen. Jim Webb decided in 2012 that he wanted to be one term and done.

“It was very hard for me to run again,” Kaine said. It wasn’t the 19 months of campaigning, or giving up his teaching job and health insurance with a 50-50 prospect of winning, that bothered him.

He just wasn’t sure he would like the job.

After comfortably winning the race against Republican George Allen, a former governor and U.S. senator, Kaine arrived at the Russell Building across from the Capitol to occupy a basement office next to another newly elected senator — Ted Cruz, R-Texas.

Kaine said some early advice from his longtime friend and political kinsman — fellow Sen. and former Gov. Mark. Warner — helped him craft the right approach to his new job.

“One of the reasons I really like the job is because Mark and I are so close, we’ve known each other for 35 years,” said Kaine, who served with Warner as lieutenant governor when Warner was in the Executive Mansion.

“I was like Ed McMahon to his Johnny Carson.”

Kaine said Warner told him that members who think being in the Senate is an executive job are easily frustrated. Seek out areas of expertise, he advised.

“In the Senate you’re not an executive, but you can be an expert,” Kaine said. “And expertise jobs are great. It’s a completely different mindset. In the Senate, people will defer to expertise. … It’s made the job enjoyable from Day One.”

Kaine has specialized in the Middle East and Latin America, and on the roles of the president and Congress on issues of war, peace and diplomacy.

The son of a Kansas City welder, he’s also cultivated an expertise on career and technical education. Prior experience as a governor has come in handy on the budget committee.

Kaine said being from a politically diverse state such as Virginia, and having served as governor with a Republican legislature, has helped him maintain focus in the Senate and be productive.

While serving as governor from 2006 to 2010, Kaine was frustrated by a Republican-controlled General Assembly in his attempts to pass a transportation funding bill and win further restrictions on firearms after the April 2007 Virginia Tech shootings.

But he managed to find agreement with GOP leaders on open-space preservation and banning smoking in Virginia restaurants.

“I am always reaching out to try and work with the other side on things, because that’s what Virginia voters want me to do,” he said. “I feel very much encouraged and liberated to do that.

“I watch other colleagues here and they don’t do that, a number of them, and what I’ve concluded is they don’t feel their voters telling them to go do that,” he said.

“Maybe they live in states that are super red or super blue, but I don’t think they’re hearing from their voters the same way I’m hearing from my voters, which is ‘work with the other side.’ ”

But Kaine’s tenure in Washington hasn’t been without sour notes — even among friends.

He’s tried to get fellow lawmakers to follow his lead on Congress playing a greater role in the decision to use military force. And he’s butted heads with Obama and the administration on its handling of the Syrian refugee crisis and the Iran nuclear deal.

“I think that if the U.S. and other nations had worked to try and establish a humanitarian safe zone in northern Syria [in 2014], we wouldn’t have the refugee crisis of the dimension we have now,” he said.

Kaine also said he disagreed with the administration’s position that it could negotiate the Iran deal without giving Congress a role in the process. Ultimately, he said Congress crafted a bill that balanced the presidential power to conduct diplomacy that respected the need for congressional involvement.

“I think President Obama has been a good president, and there’s still more to come,” said Kaine, noting that his two favorite presidents — Abraham Lincoln and Harry Truman — were not without flaws.

Soon Obama will be out of office, and one of the three Democrats and 14 Republicans vying for the job will be in.

Five of them — Bernie Sanders of Vermont, Marco Rubio of Florida, Rand Paul of Kentucky, Lindsey Graham of South Carolina and Kaine’s old basement mate, Cruz, are fellow senators. Kaine said he doesn’t see them much.

“The people who clearly want to do another job are in a different category — it just immediately changes their attention to somewhere else,” Kaine said. “I’m more hanging out in the gym in the morning with the people who are really focused on the day-to-day of doing our job here.”

The coming year could move Kaine out of the Senate gym and onto the campaign trail — but as a candidate or a surrogate?

Kaine has endorsed Democratic front-runner Hillary Clinton, and swing-state Virginia’s 13 electoral votes will be key to any winning presidential strategy.

“It wouldn’t be a shock to see him become Hillary Clinton’s vice presidential nominee,” said Larry Sabato, head of the Center for Politics at the University of Virginia. “It makes sense in quite a few ways.”

Kaine is popular in Virginia and has never lost an election — as a Richmond City Council member, mayor, lieutenant governor, governor and now U.S. senator.

“He’s also on the right side of Virginia’s changing demographics,” Sabato said. “He’s popular among minorities as well as residents of growing Northern Virginia, Hampton Roads and Richmond.”

Sabato noted that if Kaine stays in the Senate, he’ll be up for re-election in 2018 — a low-turnout, off-year midterm, which can be a challenge for Democrats whose supporters tend to vote most prominently in presidential races.

“The long and short is that Kaine could move up, stay level, or head out — the unpredictable reality of politics in a highly competitive state and environment,” he said.

But Sabato said there are few in politics who could handle its ups and downs — and still play a happy tune — better than Kaine.

“If there’s one senior politician I could point to and say he’d get over a loss quickly, it would be Tim Kaine,” he said.

“He’s resilient and grounded, and life for him doesn’t appear to depend on whether he’s in office or not. But he’s also very competitive; he’ll do what he needs to do to avoid defeat.

“Kaine is one of those highly intelligent and adaptable people who probably could make a good go of anything.”

Eight years ago, Kaine was widely believed to have finished as runner-up to Joe Biden as Obama’s choice for a running mate. He noted that amid the speculation and vetting in 2008, he wasn’t doing anything different than his job as governor.

“I wasn’t campaigning for a different job, I was trying to do my job,” he said. “Part of it was because [a vice presidential nod] just didn’t seem like that big a chance. I kind of have the same feeling now.

Sen. Tim Kaine chats with Victor Zitta as he enjoys music during the jam in Floyd.