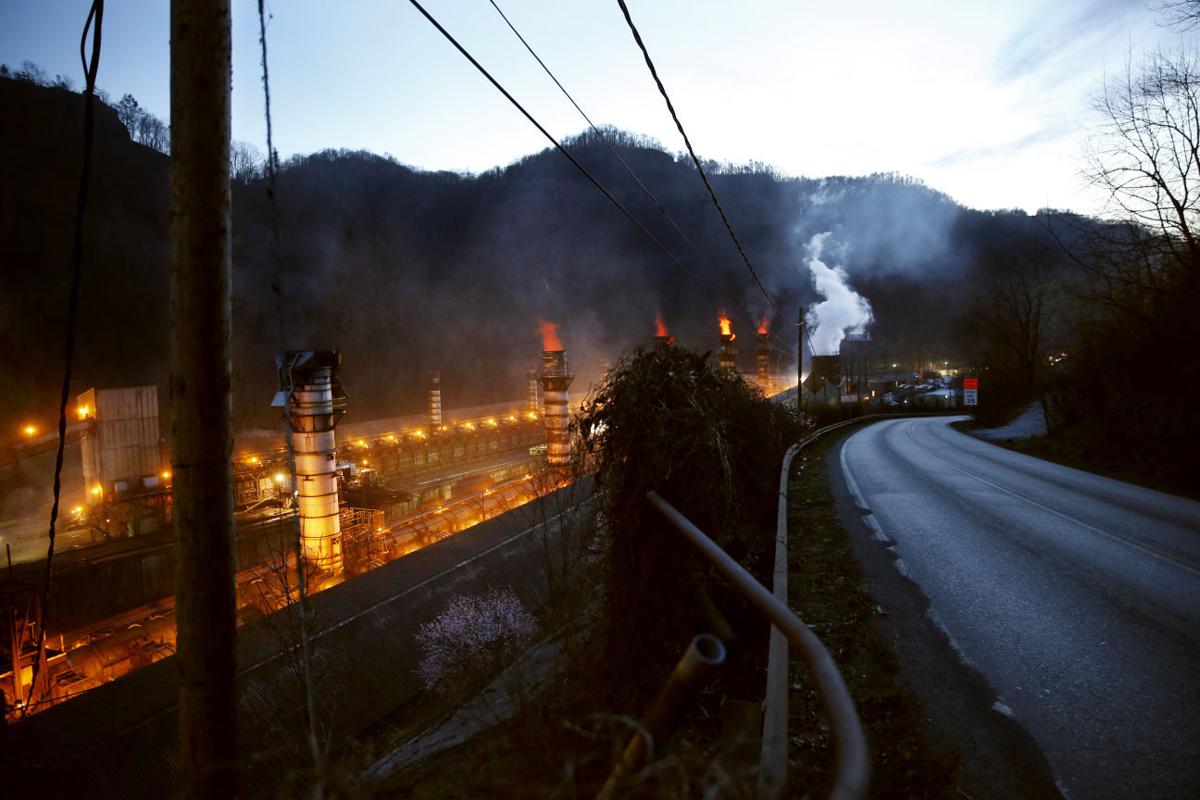 The Jewell Coke Plant in Buchanan County. It is still operational, but the market for coal is shrinking. 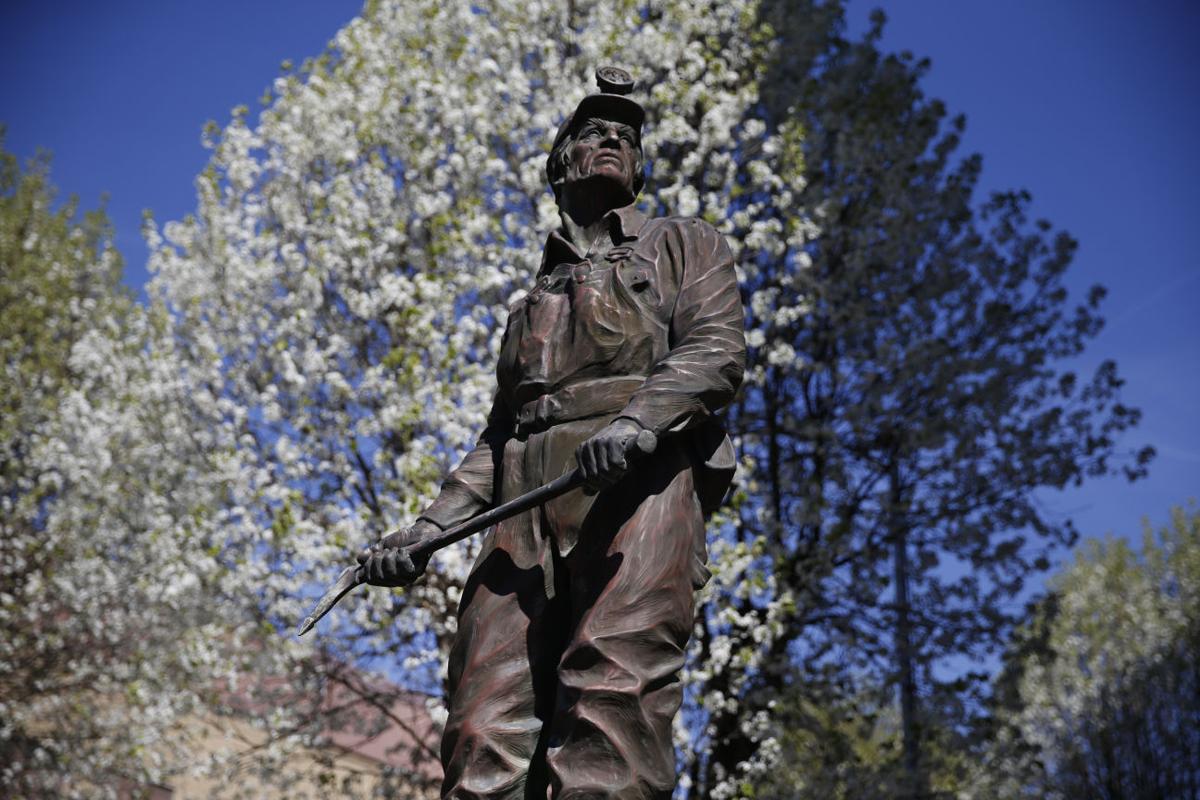 A coal miner statue stands beside the Buchanan County Courthouse in Grundy.

GRUNDY — Retired coal miner Fred McCracken was raised in a Democratic household, but he doesn’t think the country is ready for a female president and longs for a candidate like “ol’ big ears Ross Perot.”

The 67-year-old Buchanan County resident says he probably won’t vote in November, but he sees how electing Donald Trump would send a message to the world.

“These other countries need to know that there’s somebody over here stupid enough to pull the trigger on ‘em,” McCracken said as he finished up at a barber shop along U.S. 460, the winding highway that serves as the main drag in this mountainous corner of Southwest Virginia.

Doug Davis, another retired coal worker waiting for a haircut at Jerry’s Barber Shop in Oakwood, said the slumping coal mining business may be “God’s way of scattering the people out.”

When it comes to Trump, his faith is stronger.

There aren’t many votes to be had in Buchanan, a shrinking Appalachian county on the edge of West Virginia and Kentucky with an estimated population of 22,776.

But of the ballots cast for Republicans here in the March 1 primary, an exceptional number went to Trump, who won a narrow victory statewide over now-withdrawn Sen. Marco Rubio of Florida. The tough-talking Trump won nearly 70 percent of the vote — his highest margin in the country so far.

Over a Mexican lunch in Grundy, the county seat where most of the old downtown was demolished and a mountainside was blasted away to create enough flat land for a Wal-Mart, Liz Justus credited Trump for being the first to talk about building a wall to keep out illegal immigrants.

The 53-year-old co-owner of a home health care business said she’s never been political previously and thinks Trump can go “a little overboard” with the name-calling.

But when he says he’ll bring back coal jobs, she believes him.

“He has the personality where he would do it just to prove that he could do it,” Justus said.

If working-class anger is the fuel for Trump’s rise, few places were better primed for a blowup. Among Buchanan’s almost all-white populace, unemployment is high, incomes are low and college degrees are rare.

The growth of cheaper natural gas as a source of fuel to generate electric power and environmental restrictions aimed at reducing greenhouse gas emissions have put the coal industry under pressure, with weak coal prices forcing several large producers to consider bankruptcy.

Last month, CONSOL Energy, a major employer in Buchanan, sold its Buchanan mine and other coal assets in a $420 million deal with Coronado IV.

In the past five years, Buchanan’s population has fallen about 5.5 percent, according to U.S. Census Bureau estimates. Declining coal production has meant less tax revenue for the county government, forcing officials to consider steep budget cuts and possible layoffs of public workers.

Many Buchanan residents pointed to presumptive Democratic nominee Hillary Clinton’s recent comment about putting “a lot of coal miners and coal companies out of business.”

The remark came as Clinton was describing a $30 billion plan to safeguard benefits for miners and their families and diversify coal-dependent economies.

That a New York billionaire would find rock-solid support in a hardscrabble place such as Buchanan — where Grundy’s one chain hotel warns guests of an extra cleaning fee for rooms smudged by dirty boots — is one of many unexpected turns of the 2016 campaign cycle.

In interviews with Buchanan residents and political observers, the Trump effect here was attributed to a combination of demographics, fury over lost jobs, and economic decline (much of it blamed on President Barack Obama and the so-called war on coal) and, perhaps above all, a desperate desire for something different.

Trump “gives voice to a feeling of frustration, the lack of any other place to turn, lack of confidence in the economic future that so many people in places like Buchanan County are feeling,” said Rick Boucher, a former Democratic congressman who represented Southwest Virginia’s 9th District for three decades before losing to Rep. Morgan Griffith, R-Salem, in the 2010 Republican wave.

“I think to a large extent that explains why he’s been so popular nationwide,” Boucher said.

Trump, who has promised to scale back regulation by cutting the U.S. Environmental Protection Agency, won every locality in the 9th District but the city of Radford, which Rubio took by 30 votes.

Tucker Davis, a 25-year-old Republican operative who served as Trump’s field director for western Virginia, would not discuss campaign strategy, but he told a crowd at a recent Buchanan GOP meeting that people are “fed up” and “yearning for leadership.”

“I think they’re ready to knock the table over and change things,” said Davis, a Grundy native who’s angling to represent Virginia this summer as a Trump delegate to the Republican National Convention in Cleveland.

“I think they’re using scare tactics on him,” said Justus, adding that if Trump were racist, he wouldn’t have the support of Ben Carson and Herman Cain, who are African-American.

In a speech at Radford University on the eve of Super Tuesday, Trump told the crowd he’s a believer in “clean coal.”

“We’re going to bring the coal industry back 100 percent,” he said. “If I win, we’re going to go clean coal, and that technology is working. I hear it works.”

Though Appalachian coal regions have been one of Trump’s strongest areas of support, some Buchanan residents aren’t sold on the idea that the industry can be restored.

Daniel Duryea, a 35-year-old electrician who moved to the area a few years ago from New York, said Trump is “blowing smoke.”

“People here, they’ve got a false hope,” Duryea said. “And they’re looking for something like that.”

Trump himself hasn’t always been hot on coal labor.

In an interview with Playboy magazine published in 1990, he used a mining analogy while describing deal-making as a beautiful, creative pursuit.

“The coal miner gets black-lung disease, his son gets it, then his son. If I had been the son of a coal miner, I would have left the damn mines,” Trump said.

“But most people don’t have the imagination — or whatever — to leave their mine. They don’t have ‘it.’?”

He went on to describe “it” as “an ability to become an entrepreneur, a great athlete, a great writer.”

As with many statements from Trump’s pre-politics life, his supporters seem more focused on what he’s saying now. And how he says it.

“The working class in the U.S. loves Trump’s straightforward style,” said Corey Stewart, chairman of Trump’s Virginia campaign and a member of the Prince William Board of County Supervisors.

With blue-collar Democratic traditions rooted in labor unions, many suspect the party crossover made possible by Virginia’s open primary system played a large role in the Buchanan result.

Jamie Hale, a 44-year-old former Obama voter who considers himself “blessed” to still have work at a coal-fired power plant in neighboring Wise County, said he’s now behind Trump.

“He’s for compromise and making deals,” Hale said. “Here in the last eight years, we’ve had no compromise. It’s all been just stop Obama regardless.”

Carroll Branham, the Democratic chairman of the Buchanan Board of Supervisors, guesses as much as half of the Trump vote in the county may have been Democrats. Branham said he’s open to voting for Trump in November but considers him “unproven” and needs to see concrete plans.

“This county is not hard-core Democrat or Republican,” Branham said. “Most of the time they elect what they think are the best people.”

On Super Tuesday, Trump won 1,588 of 2,278 Buchanan primary votes for Republican candidates, followed by 313 for Rubio and 266 for Sen. Ted Cruz of Texas. On the Democratic side, Hillary Clinton won 523 of 744 total Democratic votes.

In the 2008 primaries, Buchanan cast 680 votes for Republicans and 2,497 votes for Democrats, the vast majority of which went to Clinton.

If Trump becomes the nominee and runs strong in Southwest Virginia, Republican organizers know a surge here easily could be wiped out by high-population localities in Northern Virginia that favor Democrats and where Trump’s primary showing was weaker.

In recently released electoral predictions envisioning a Trump vs. Clinton matchup, the University of Virginia’s Center for Politics switched Virginia from a toss-up state to leaning Democratic.

Russell Presley, an attorney who chairs the Buchanan Democratic Committee, said it’s been difficult to gauge who’s voting for Trump because few people seem to be outwardly stating their support.

Presley said he believes the political mood in Buchanan has been shaped by eight years of conservative broadcasters blaming Obama for “all the ills of the economy.”

“I think when he got elected, our country took a step forward,” Presley said. “But unfortunately certain areas of the country, including my own, probably took two steps back.”

With Trump winning huge swaths of rural Virginia, many state lawmakers now find themselves in the tricky position of seeing their constituents embrace a candidate few in elected office leaped to endorse.

Griffith has not endorsed any presidential candidate but said he would support Trump if he wins the nomination. As a Southerner, Griffith said, he’d “say things a little bit differently” than the New Yorker.

Del. Will Morefield, R-Tazewell, whose district includes Buchanan, endorsed former Florida Gov. Jeb Bush before he switched to Rubio but said he “absolutely” would support Trump in the general election.

“He’s a straight shooter. He pretty much tells it how it is,” Morefield said. “And I think that’s what people are really looking for in a candidate right now. I think there’s an overall disgust with the establishment, whether you’re a Democrat or a Republican.”

Morefield and other officials say they’re working to create a business-friendly environment that can lure new industries to Southwest Virginia.

For Buchanan, that has meant trying to develop the infrastructure to bring more call and data centers to a mountaintop business park built on a reclaimed surface mine.

Boucher, who emphasized telecommunications as a lifeline for rural areas, said internet commerce has made it less important for companies to be geographically close to their customers and has opened up possibilities in areas where land is cheap and taxes are low.

The county also is continuing to establish itself as education center. It’s home to the Appalachian School of Law and the Appalachian College of Pharmacy. An optometry school is in the works.

“We’re just trying to hold on right now and wait till things begin to get better,” Branham said.

For many, that means hoping for President Trump.

The NBA at 75: Impact on societal issues

The NBA at 75: Impact on societal issues

The Jewell Coke Plant in Buchanan County. It is still operational, but the market for coal is shrinking.

A coal miner statue stands beside the Buchanan County Courthouse in Grundy.