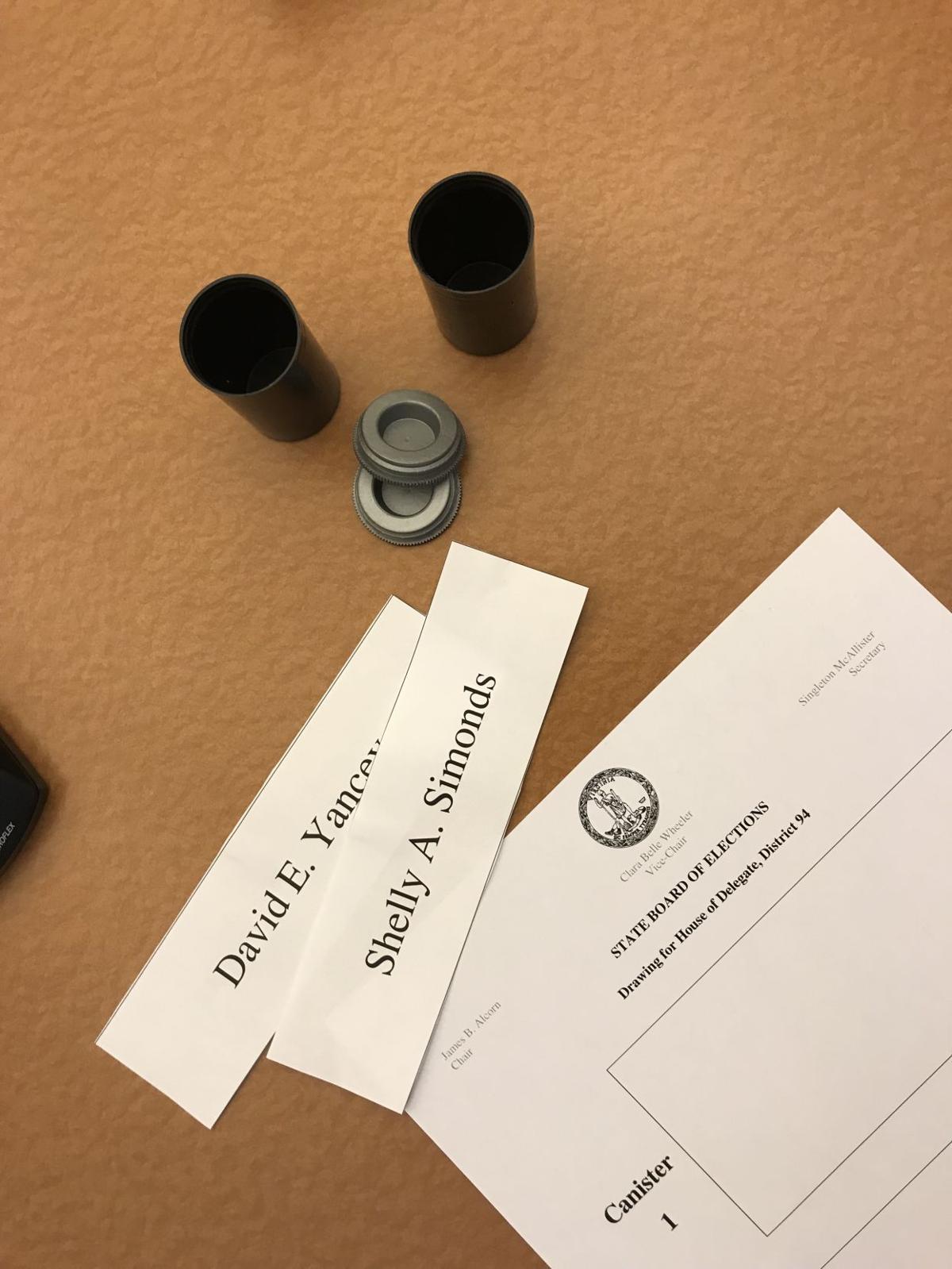 The canisters used in the tiebreaker in the 94th district race. 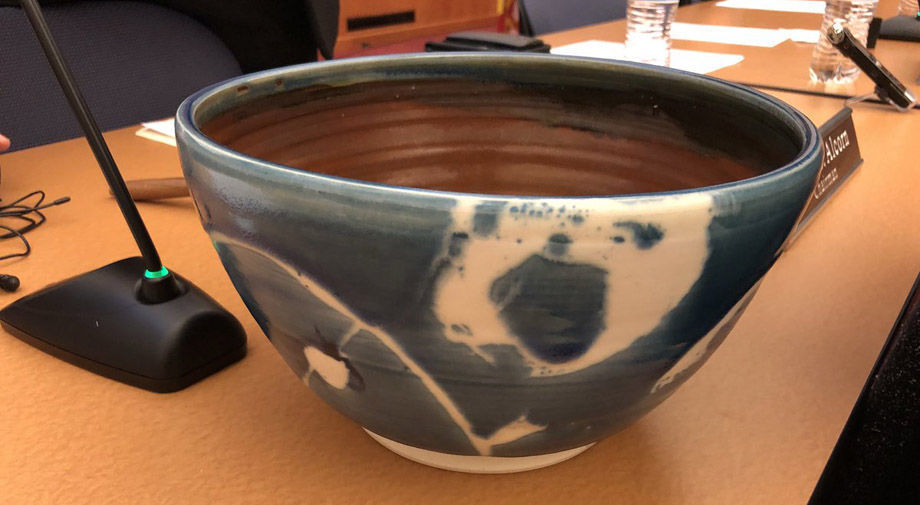 Election officials drew a winner for the 94th House District from this handcrafted bowl on loan from the Virginia Museum of Fine Arts.

RICHMOND — Republican Del. David Yancey won a random drawing Thursday to break a tie in a critical House of Delegates election, putting Republicans on track to keep a 51-49 majority and avoid a power-sharing deal with Democrats.

In front of a packed room at the Capitol and a live TV audience via C-SPAN, State Board of Elections Chairman James Alcorn drew a film canister from a bowl and pulled out a strip of paper with Yancey’s name on it.

Yancey’s Democratic challenger in the Newport News-based 94th District, Shelly Simonds, sat stoically in the front row with her husband and daughter as she learned the shake of the bowl hadn’t gone in her favor. The elections board pulled a second canister and revealed Simonds’ name to assure the audience there had been no skullduggery in the bowl.

Yancey did not attend the drawing, leaving empty seats in an area reserved for the Republican side.

In a prepared statement, Yancey congratulated Simonds on a “race that could not have been any closer.”

“The election is behind us, the outcome is clear and my responsibility now is to begin the work I was re-elected to do,” Yancey said.

Though the drawing brought a dose of finality to a long-running electoral drama, state law appears to allow Simonds to ask for a new recount even though election officials and judges already conducted a recount in Newport News last month.

Speaking to reporters after the drawing, Simonds said she was keeping all options open and would not concede the race, but she did not specify whether she intends to seek a new recount.

“It does seem like a sad ending to the story to have to end on a game of chance,” Simonds said.

The elections board signed paperwork certifying Yancey as the winner, but board members said it will be up to others to figure out if a second recount is legally possible.

After learning they’d undoubtedly be heading into the legislative session that starts Wednesday with a slight majority instead of a 50-50 split with Democrats, Republican leaders said during a news conference that they believe Simonds has the legal right to ask for a second recount. But they said they hoped she wouldn’t, to allow voters in the 94th District to have representation as the House moves forward with business.

“We wouldn’t be in this position if it weren’t for weeks of intentional delays and unnecessary legal filings by Ms. Simonds’ campaign,” said Del. Kirk Cox, a Colonial Heights Republican who, after Thursday’s drawing, is a virtual shoo-in to be elected House speaker next week to replace retiring Speaker Bill Howell, R-Stafford.

Prior to the Nov. 7 elections, Republicans had a 66-34 majority in the House, but Democrats flipped 15 GOP-held seats while winning statewide races for governor, lieutenant governor and attorney general.

Del. Todd Gilbert, R-Shenandoah, said that even with the GOP getting the luck of the draw Thursday, the caucus is still preparing for a new era of collaboration with the reinvigorated Democrats.

“We’ve seen some poisoning of the well, these last few days especially, where we’ve been accused of stealing this particular election,” said Gilbert, his party’s pick to succeed Cox as House majority leader. “We think this is an opportunity to heal those divides.”

Cox had said the House would not seat the winner of the drawing if a recount was pending. He repeated that position Thursday, saying the House won’t seat Yancey if Simonds pursues a recount. Republicans still expect to have the 50 votes they’d need to organize the House.

In a fundraising appeal Thursday afternoon, the House Democratic Caucus said Republicans seemed “really excited” to have gotten lucky in one final contest after Democrats “were swept to massive victories by the voters.”

On Friday, a federal court will hold a hearing on a lawsuit in the 28th House District that asks the court to throw out what appeared to be a Republican victory because nearly 150 voters in the Fredericksburg area cast ballots in the wrong House race. Cox said Thursday that Republicans are “very confident” that lawsuit will be resolved in their favor, which would allow his party to avoid a special election and confirm Republican Bob Thomas as the 28th District winner over Democrat Joshua Cole.

In the 94th District, it’s not clear a new recount would produce a different result, but it could give Simonds a chance to get a different set of judges to look at the controversial ballot that created the tie.

Yancey held a 10-vote lead over Simonds in unofficial results tallied on election night, but the Dec. 19 recount showed Simonds squeaking out a one-vote win. Republicans appeared to concede the seat but went into a final court hearing Dec. 20 armed with a surprise letter from a Yancey-aligned recount official suggesting a ballot that had been discarded should have been counted for Yancey. On the ballot in question, the voter filled in bubbles for both Simonds and Yancey but drew a line through Simonds’ bubble.

Simonds’ lawyers argued the ballot was an impermissible overvote and should be tossed out because the voter’s intentions weren’t clear. The judges sided with Yancey, saying the ballot met the criteria for an exception that allows voters to scratch out erroneous votes to clarify their choice.

An earlier tiebreaking drawing scheduled for Dec. 27 was postponed after Simonds filed a new legal motion asking the three-judge recount court to reverse itself. In a ruling issued Wednesday, the judges stood by their decision, saying they applied the law correctly.

The blue-and-white, handcrafted bowl was provided by the Virginia Museum of Fine Arts, where it had been sitting on a shelf since its creation last month by the VMFA’s resident potter, ceramic artist Steven Glass. Before Thursday’s drawing, a VMFA representative relayed a quote from the artist about having his work selected for the momentous event.

“Clay vessels, like boats, carry cargo. The cargo of ideas and opportunities,” Glass said. “Therefore I feel it is a very fitting vessel to select the winner of this election.”

As an experienced local politician who serves on the Newport News School Board, Simonds said she was emotionally prepared for any outcome Thursday. But the result goes beyond personal disappointment, she said, because of the impact it will have on what policies can pass the House.

“Medicaid expansion really was on the line here,” Simonds said.

This unknown detail about Stonehenge might blow your mind

This unknown detail about Stonehenge might blow your mind

New book aims to teach history of US civil rights

New book aims to teach history of US civil rights

When Dawnn Wallace learned that the election in her Newport News House of Delegates district would by decided be drawing a name from a bowl, she was "flabbergasted" to learn that was the state's process for breaking ties.

Officials said Wednesday that they were watching snow forecasts for the region, but barring yet another plot twist, the State Board of Elections will meet in Richmond at 11 a.m. Thursday to break the tie by picking a name out of a bowl.

With a closer divide in both chambers, General Assembly moves into action

After a particularly contentious election season, state Democrats made unprecedented gains in November by picking up 16 seats in Virginia’s Ho…

The canisters used in the tiebreaker in the 94th district race.

Election officials drew a winner for the 94th House District from this handcrafted bowl on loan from the Virginia Museum of Fine Arts.