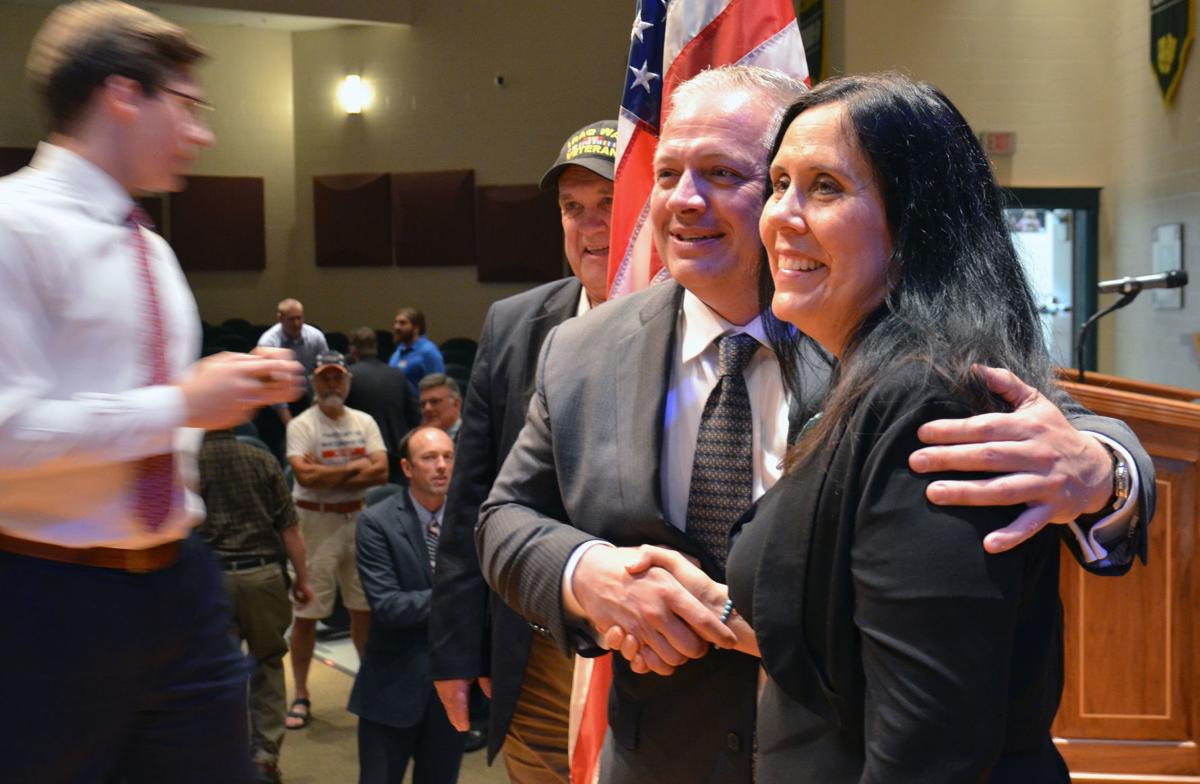 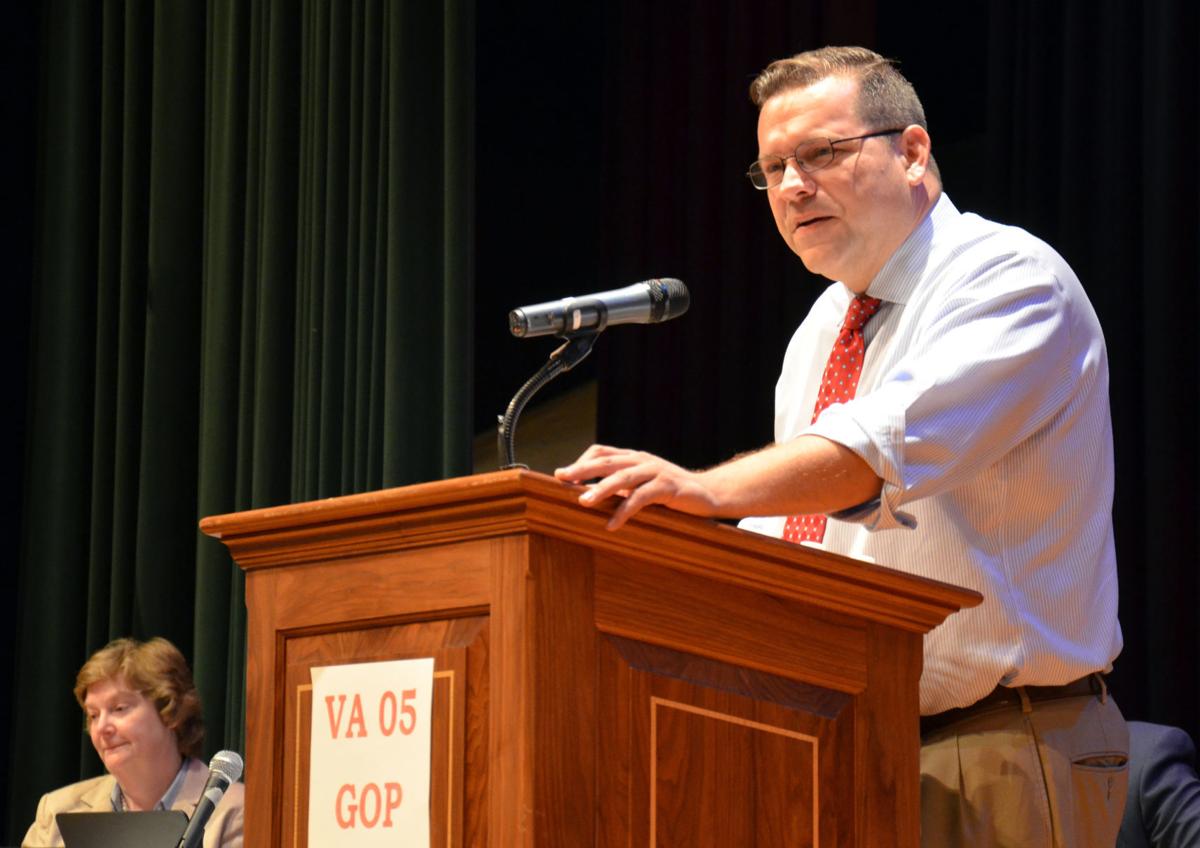 Rep. Tom Garrett, R-5th, speaks before voting begins for a Republican nominee to replace him in the 5th District race at Nelson County High School in Lovingston on June 2. Garrett has announced he will not seek re-election.

LOVINGSTON — Fifth District Republicans chose craft distillery owner Denver Riggleman on Saturday as their candidate to replace U.S. Rep. Tom Garrett, R-Buckingham, who suddenly ceased his re-election bid earlier in the week due to his struggle with alcoholism.

On the fourth round of voting, Riggleman, who briefly ran for governor last year, came away with a majority of the votes from the 5th District Republican Committee. The 37-member committee hastily organized the meeting at Nelson County High School after Garrett announced on Monday he will leave Congress to focus on his recovery and family.

Six people vied for the nomination at the five-hour meeting; five of them previously announced their intention to run. Cynthia Dunbar, two weeks after losing the GOP nomination in the 6th District, showed up unannounced and competed with Riggleman until the final round of secret balloting.

Riggleman, a former Air Force intelligence officer and owner of Silverback Distillery in Afton, will face Democrat Leslie Cockburn, a journalist and author. Cockburn had raised more money than Garrett and had more cash on hand.

Replacing Garrett with Riggleman gives the GOP a chance to reset its strategy for retaining the district, which stretches from Fauquier County to the North Carolina border. It includes Franklin County and part of Bedford County.

“You’ve never seen a fighter like Denver Riggleman,” Riggleman said in his victory speech. “I’ve been through hell, and I’ve got hell to pay and I’ve hell to give.”

Riggleman leans libertarian, and was characterized by his supporters as the sensible candidate and more likely to defeat Cockburn.

Riggleman said he is interested in learning more about decriminalizing marijuana, has vocalized opposition to the Atlantic Coast Pipeline, and is pro-life but supports abortions in the case of rape, incest and when a woman’s health is at risk. He said if elected, he plans to join the conservative House Freedom Caucus.

“Check your personal preference and think about how the majority of the electorate will come out and vote in November,” pleaded Elliott Harding, a Young Republican Federation of Virginia representative. Younger political activists at the meeting tended to favor Riggleman.

Candidates only had a few days to woo committee members following Garrett’s unexpected departure from the race. On Saturday, political activists used speeches to rally supporters for preferred candidates. At times the proceedings became contentious, with people standing to shout responses.

The committee did not release final ballot numbers, but a document on the table where the voting took place showed a one-vote difference. Dunbar told attendees afterward that she only lost by one vote.

Despite the sudden change in opponent, it will be an uphill battle for Democrat Cockburn to win the general election, a first-time candidate seeking to flip the 5th District seat. President Donald Trump won the conservative district by 11 points. In last year’s governor’s race, Republican Ed Gillespie carried it by nine points.

“Regardless of who they choose, one thing is certain: we won’t be stopped,” Cockburn told supporters in an email.

Garrett made an appearance at the meeting. He didn’t endorse anyone and urged people to not engage in nasty tactics that drive people away from politics. He told attendees that despite the frenzied past few days, he was happy.

“It is well with my soul,” Garrett said to applause.

Virginia Sen. Bill Stanley, R-Franklin County, attended Saturday’s meeting but decided not to run, citing his family. He said when he told his 6-year-old son he was considering running for Congress, his son cried and asked him not to do it.

Stanley, a former 5th District Committee chairman who was elected to the Senate in 2011, entered the race Thursday and was considered the favorite for the nomination. He said he’s going to consider running for attorney general or governor in 2021.

Rumors began swirling among political activists just hours after Garrett’s announcement on Monday that Dunbar was seeking the nomination in the 5th District. She lives in the Forest community of Bedford County in the 6th Congressional District.

On Thursday, a Roanoke Times reporter called Dunbar asking if she would run for the nomination. Dunbar responded by claiming she was unable to hear the reporter because of bad phone service. Subsequent calls and text messages were not returned.

“It’s been a trippy road, but this is where I find myself,” Dunbar said, when she arrived outside the high school.

Saturday was Dunbar’s third run for Congress. She ran in Texas in 2008, losing a GOP primary after earning less than 4 percent of the vote. Del. Ben Cline, R-Rockbridge, defeated Dunbar two weeks ago in a 6th District convention fraught with controversy due to accusations of inter-party favoritism regarding Dunbar’s campaign. Dunbar denied the allegations.

Controversy followed Dunbar into the 5th District, as well. Political activists who attended Saturday’s event expressed concern about proceedings, such as how people could show up without formally notifying the committee about wanting to be a nominee.

There were also committee members that voted on Saturday who worked for Dunbar’s campaign in the 6th District.

District GOP chairman Melvin Adams said these ties were not a conflict that would prohibit them from voting. He said his wife had worked for Dunbar, but he was “completely disconnected.”

Dunbar is a former member of the Texas State Board of Education who later taught at Liberty University School of Law. She represents Virginia on the Republican National Committee.

Dunbar believes public schools are a “subtly deceptive tool of perversion” and are unconstitutional, and has compared the gay rights movement to Nazism.

Political activists touted Saturday her position of banning abortions in all cases.

During Riggleman’s victory speech, a man sitting near Dunbar stood up and shouted about “backroom deals.”

“I don’t make deals. Ever,” Riggleman responded. “What I make a deal for is liberty and the beauty of the Republican Party.”

Adams said he believes things will smooth over among Republicans, and they will unify around Riggleman.

Central Virginia Republicans will decide in a week whether to stick with Rep. Denver Riggleman, whose libertarian swagger has agitated some ac…

Rep. Tom Garrett, R-5th, speaks before voting begins for a Republican nominee to replace him in the 5th District race at Nelson County High School in Lovingston on June 2. Garrett has announced he will not seek re-election.