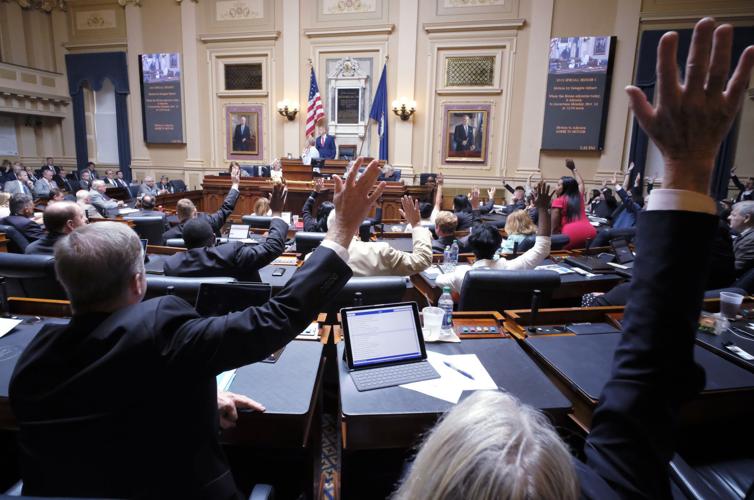 Democrats in the House of Delegates call for a recorded vote to adjourn Tuesday in Richmond during the special session to consider gun-related legislation. The session lasted just over 90 minutes and adjourned until Nov. 18. 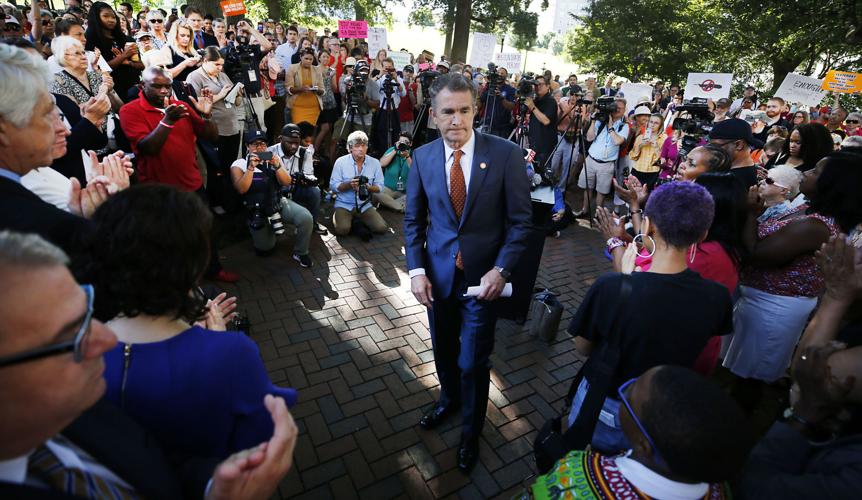 Gov. Ralph Northam walks away from the lectern after speaking at a rally against gun violence held on the Virginia State Capitol grounds on Tuesday. Northam called the legislature into a special session to address gun legislation after 12 people were shot to death at a Virginia Beach government building May 31. 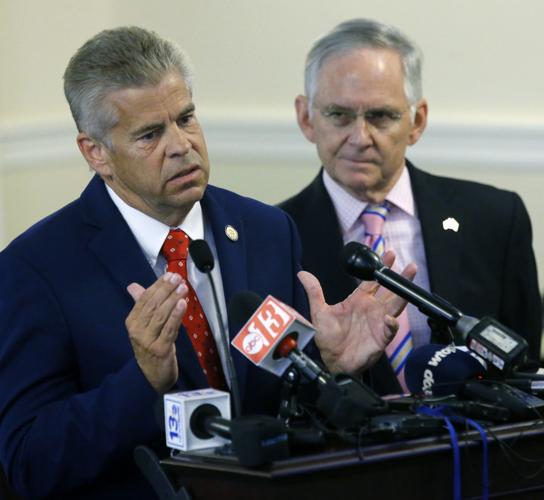 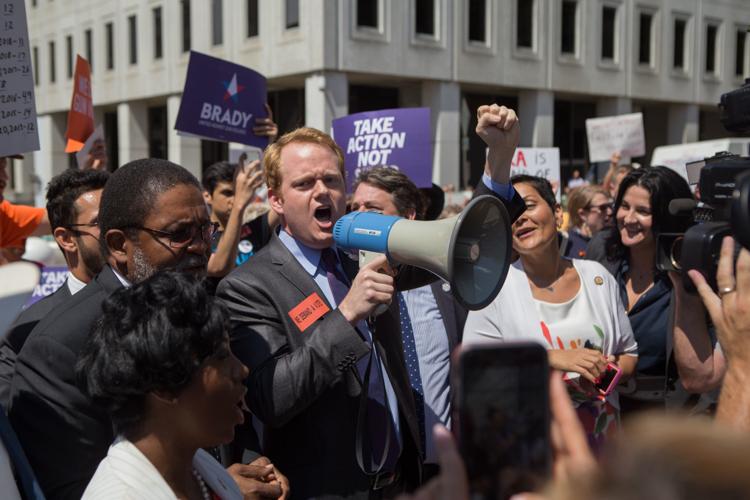 Del. Chris Hurst, D-Blacksburg, speaks at a rally against gun violence in Richmond before Tuesday’s special session of the General Assembly. Both chambers abruptly adjourned, referring all bills to the Virginia Crime Commission. 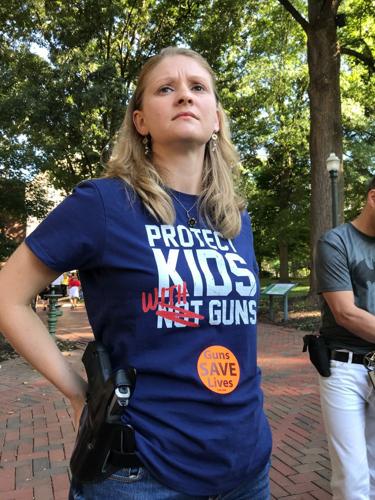 Gun rights supporters rallied outside the Capitol on Tuesday, including some who were openly carrying weapons.

About 90 minutes after the Republican-controlled General Assembly convened for a special session to debate guns in the wake of the May 31 shooting at a municipal building at Virginia Beach that left 12 dead, lawmakers went home without taking any action on legislation. The House of Delegates and Senate abruptly adjourned until November, stunning Democrats who had introduced several gun control bills at the request of Gov. Ralph Northam and hoped to present them.

Instead, Republican leaders coordinated beforehand — without telling Democrats — to have any bills filed sent to the Virginia State Crime Commission. The commission will meet in the fall, and the General Assembly will reconvene Nov. 18 — after the general election in which all 140 seats are up for election , prompting Republicans to try to cling to their slim majorities.

“It is shameful and disappointing that Republicans in the General Assembly refuse to do their jobs, and take immediate action to save lives,” Northam said in a statement. “I expected better of them. Virginians expect better of them.”

“We owe more to the people of Virginia,” Obenshain said at a news conference after the legislature adjourned.

Republicans pitched handing over the legislation to the crime commission as their version of what former Gov. Tim Kaine, a Democrat, did after the 2007 Virginia Tech shootings. Three days after those shootings, Kaine convened a panel of experts to conduct an independent review and prepare a report reviewing failures and making recommendations.

It’s unclear how many of the recommendations have been properly implemented because the report has never been formally reviewed. But Democrats said few gun control recommendations have been enacted. For example, the report recommends universal background checks, which 84% of Virginia voters support, according to a 2018 poll from the Wason Center for Public Policy at Christopher Newport University .

Sen. Creigh Deeds, D-Bath, praised the Virginia Tech panel for their bipartisanship and useful work, but he said few recommendations have been fully implemented.

“They didn’t generate the political will to make a lot of lasting change in the laws in the commonwealth of Virginia,” Deeds said in the Senate Courts Committee.

The Virginia Tech shootings, in which 32 students and staff were shot to death by a gunman who killed himself, led to an enhancement of mental health restrictions related to the purchase of firearms and to improvement of the National Instant Criminal Background Check System.

Meanwhile, gun rights, not restrictions, grew stronger. In 2012, then-Gov. Bob McDonnell successfully pushed the repeal of the one-handgun-a-month law that Gov. Doug Wilder, a Democrat, enacted in 1993 to stem the illegal flow of firearms to the northeast via straw purchases in Virginia.

Democrats were not enthralled with the bills going to the crime commission. Sen. Janet Howell, D-Fairfax, said the executive board has typically not dealt with gun control bills.

“I hope it’ll be different this time,” Howell told Obenshain at the Senate committee meeting.

The commission will review any legislation filed by July 19 related to proposed changes to Virginia’s laws regarding firearms and public safety. It will then meet in August to review the proposals and make a final report to the General Assembly after Nov. 12. Election Day is Nov. 5.

Democrats filed bills including universal background checks, an assault weapons ban, requiring people to report lost and stolen firearms, and tougher penalties when firearms are left in the presence of minors. Sen. John Edwards, D-Roanoke, sponsored a bill that would allow a locality to adopt an ordinance that prohibits firearms and ammunition at any meeting of a local governing body. Del. Richard Sullivan, D-Fairfax, advocated on the House floor for extreme risk protection orders to allow a police officer or prosecutor to petition a judge for a warrant to seize legally owned guns if someone is determined to be an immediate threat to themselves or others.

In a speech on the House floor, Del. Chris Hurst, D-Blacksburg, pointed out that mass shootings are not responsible for most of the gun deaths in Virginia, but they capture the most attention from the public. It’s the suicides, daily shootings and accidental shootings, he said, that make up the most gun deaths. But if it’s a mass shooting that’s drawing the legislature to act, he said, “so be it.”

“It recently became apparent to me that sticking your fingers in your ears looks exactly the same as a gun pointed at somebody’s head, and Mr. Speaker, I’m so sorry but it’s time for us to start pulling our fingers out of our ears so we can actually start getting guns out of the heads and faces of other Virginians across the commonwealth,” said Hurst, whose girlfriend, WDBJ-TV journalist Alison Parker, was shot to death on live television in 2015.

Meanwhile, Republicans filed several bills that would have imposed mandatory minimums for firearm offenses, eliminate video-training as an option for concealed-carry permits and allow local government employees to carry a concealed weapon at work if they have a concealed handgun permit.

Norment filed a bill to prohibit people from carrying guns and ammunition in government buildings and making the punishment a Class 6 felony (punishable by up to five years in prison, or less than 12 months in jail and a fine of up to $2,500). Virginia Citizens Defense League said in an email to its supporters that Norment’s legislation “stabs gun owners in the back.” In protest, Sen. Bill Stanley, R-Franklin, submitted to Norment his resignation as whip, or top vote-counter for the party in the Senate. The Senate Republican caucus voted to keep Stanley as whip, with Stanley voting to leave the position. Stanley said he took Norment’s bill seriously.

A day after filing the bill, Norment said he did not support it and ultimately had it struck. It’s not clear why Norment proposed a bill he didn’t support, but in a briefing with reporters, he said “the reason behind it was that I probably was too smart by half. I must say that in this theater of politics that I had some Machiavellian thoughts.” He said the bill was too broad.

For a month, gun control advocates and gun rights supporters rallied support ahead of the special session. The Northam administration held a series of roundtables around the commonwealth, and the National Rifle Association hosted town halls.

On Tuesday morning, thousands arrived to Richmond to lobby legislators and rally outside the Capitol.

“Why are we here?” Northam asked a crowd of gun control advocates outside the Capitol.

“For votes and laws!” they chanted.

In the gallery above the House of Delegates, Andy Parker, Alison Parker’s father, give the middle finger to Majority Leader, Todd Gilbert, R-Shenandoah, as he spoke.

“Cowards,” Parker said in the hallway after the legislature adjourned. He said Tuesday would set the stage for the November elections.

On a bus back to Roanoke, Mayor Sherman Lea, who came to Richmond to testify in favor of the bill allowing localities to ban guns at local government meetings, sounded dejected.

“Here we are again as we’ve done in so many instances, nothing is done,” Lea said. “We’ll have to wait until November. We’ll be back, and we’ll have our day.”

U.S. Sen. Tim Kaine pushed back against Republicans in the Virginia General Assembly who say their plan to have the state crime commission rev…

The Virginia State Crime Commission has scheduled two days of meetings in August to hear the gun bills the Republican-led General Assembly refused to take up this week.

The Virginia Tech shootings in 2007 claimed the lives of 32 people. The Virginia Beach shooting in May resulted in 12 deaths. In the 12 years …

RICHMOND — For more than a decade Lori Haas, whose daughter survived after being shot during the 2007 shootings at Virginia Tech, has been adv…

RICHMOND — Twelve years ago, Andrew Goddard, whose son Colin survived four bullet wounds at the 2007 Virginia Tech shootings, sat in a room at…

RICHMOND — For more than a decade Lori Haas, whose daughter survived after being shot during the 2007 shootings at Virginia Tech, has been adv…

Local governments have the authority to enact zoning ordinances to regulate the location of businesses that sell firearms, Virginia Attorney G…

Gov. Ralph Northam’s administration launched a review, in the wake of a stalled special session on gun violence this summer, of the recommenda…

Ending without a bang: crime commission's report on gun violence gives no recommendations

After months of studying the causes of gun violence, the Virginia State Crime Commission issued a report with no recommendations on how to cur…

Lawmakers to return to Richmond for special session on guns

Lawmakers are returning to Richmond on Tuesday for a special session called by Gov. Ralph Northam to take up gun-related measures in the wake …

Gov. Ralph Northam on Wednesday rolled out his final list of gun control measures he wants legislators to take up next week during a special s…

Photos: General Assembly adjourns with no action on gun bills

Behind the Headlines: Investigating the Catholic Diocese of Buffalo

AIDS in Kenya: Homabay County, where fish are traded for sex

AIDS in Kenya: Homabay County, where fish are traded for sex

Democrats in the House of Delegates call for a recorded vote to adjourn Tuesday in Richmond during the special session to consider gun-related legislation. The session lasted just over 90 minutes and adjourned until Nov. 18.

Gov. Ralph Northam walks away from the lectern after speaking at a rally against gun violence held on the Virginia State Capitol grounds on Tuesday. Northam called the legislature into a special session to address gun legislation after 12 people were shot to death at a Virginia Beach government building May 31.

Del. Chris Hurst, D-Blacksburg, speaks at a rally against gun violence in Richmond before Tuesday’s special session of the General Assembly. Both chambers abruptly adjourned, referring all bills to the Virginia Crime Commission.

Gun rights supporters rallied outside the Capitol on Tuesday, including some who were openly carrying weapons.