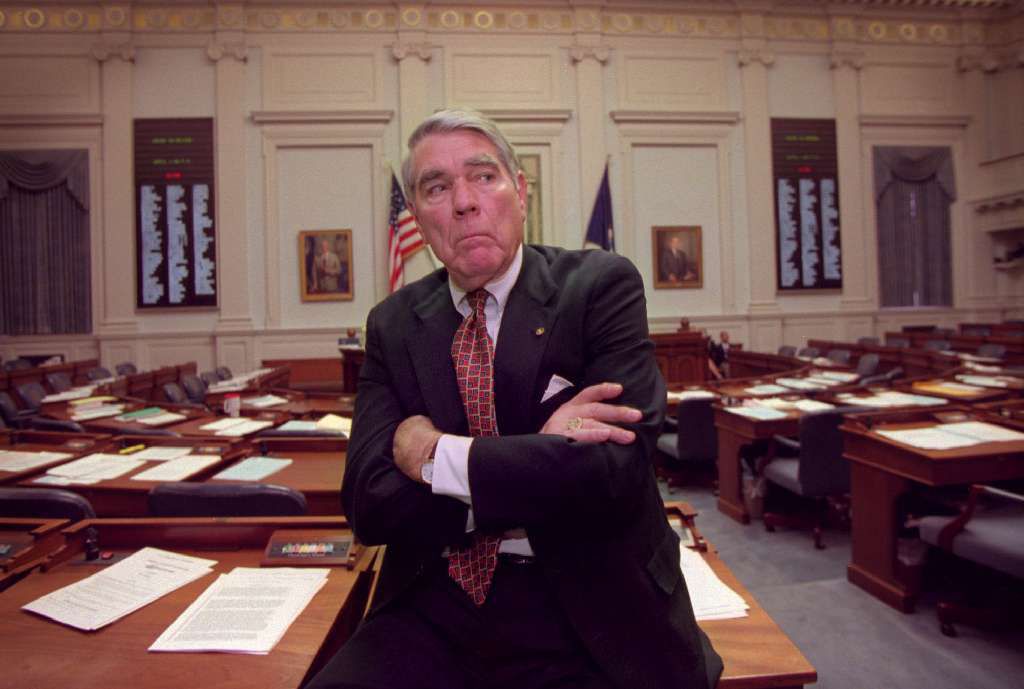 Lacey Putney at his desk in the House of Delegates in January 1998. 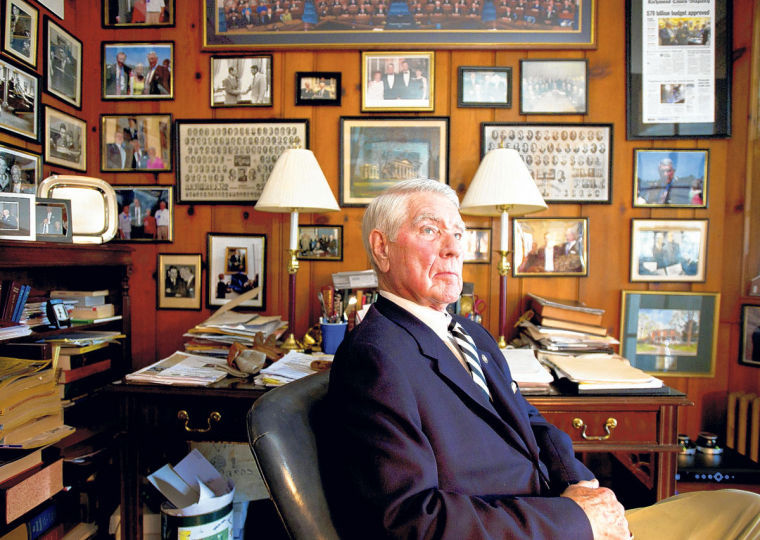 Lacey Putney of Bedford County, the longest-serving state legislator in Virginia’s history, died Saturday at the age of 89. He is shown here the year he announced his retirement. 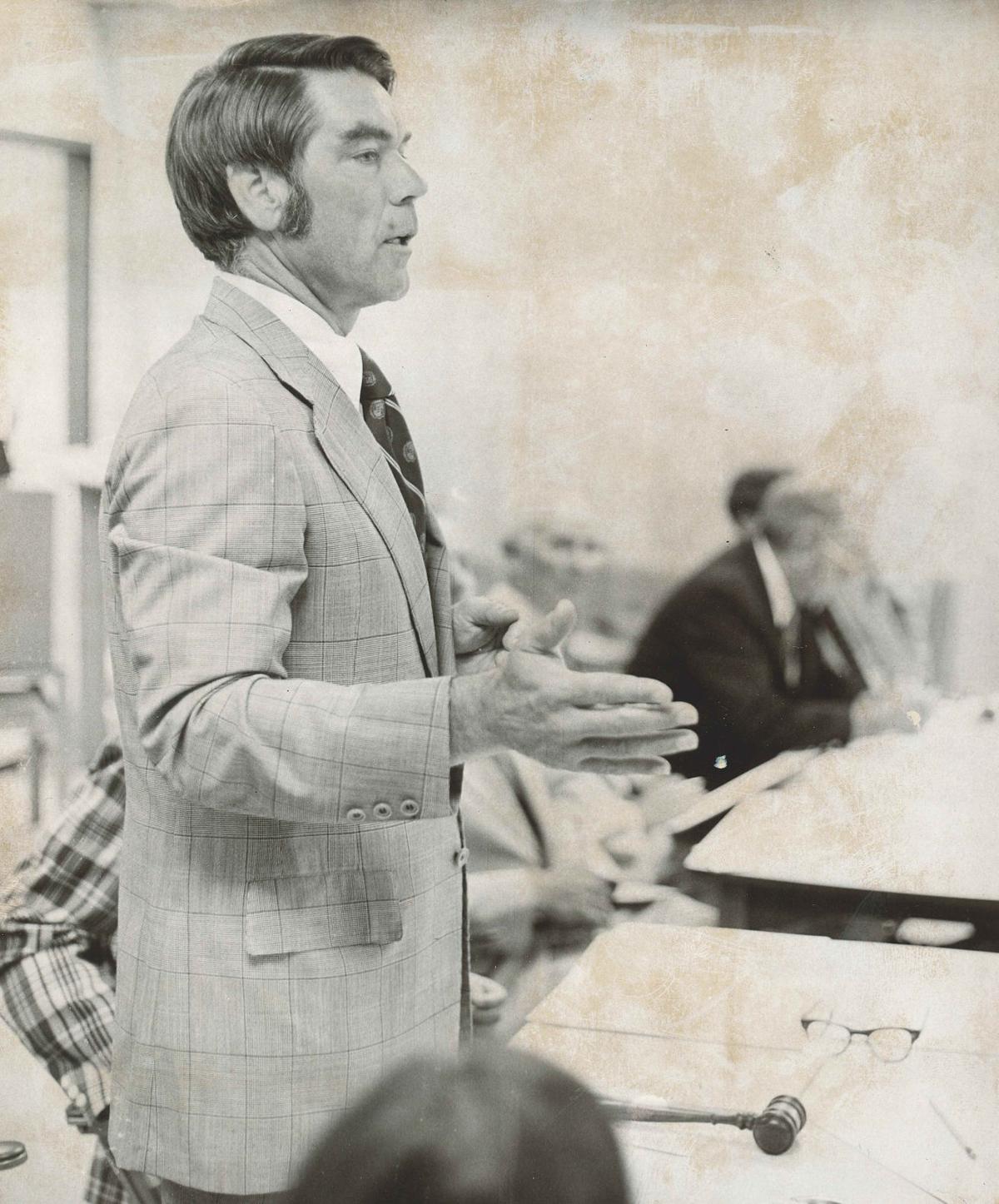 Lacey Putney, the "lion of Bedford County," served in the House of Delegates for 52 years. This photo of Putney was taken in 1974. 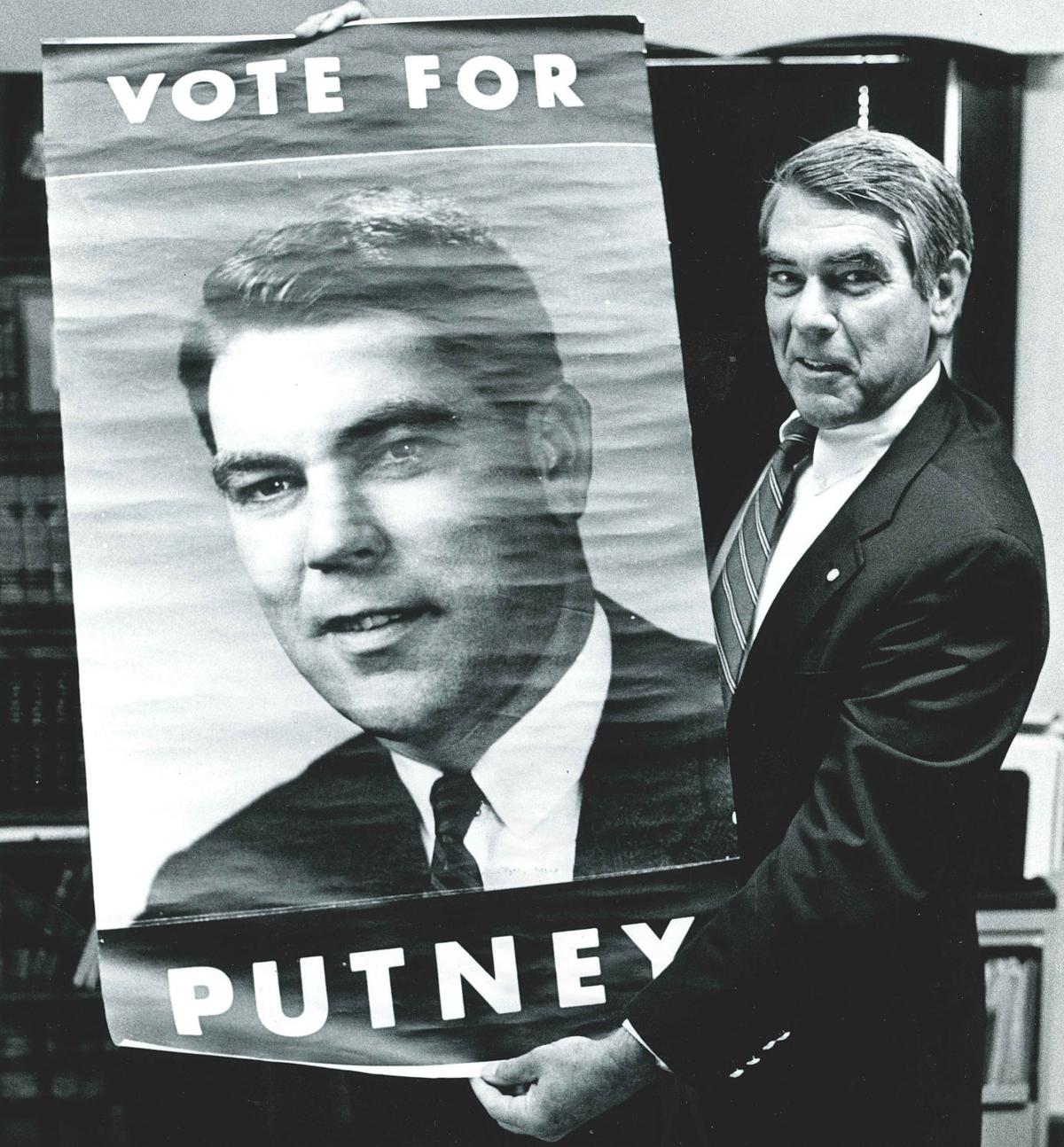 Lacey Putney holds a campaign poster from his first run for the House of Delegates in 1961. This photo was taken in 1985.

Lacey Putney could drive through Bedford County and point out who lived in each house, said state Sen. Steve Newman. He could also tell you who lived in that house before the current occupants. He knew people, and he knew their parents and their grandparents.

“It was quite remarkable to see how his mind worked,” said Newman, R-Lynchburg, who used to travel the area with Putney. “You saw how much he cared about people to remember them.”

Putney, the longest-serving state legislator in Virginia’s history who earned the respect of his peers for being a courtly Southern politician, died Saturday. He was 89.

Putney, who served in the House of Delegates for 52 years, will lie in state in the Rotunda of the State Capitol, where flags will fly at half-mast in his memory. He will be the first House member to lie in state since Speaker A.L. Philpott in 1991. Funeral arrangements will be announced at a later date.

Putney, known as “the lion of Bedford County,” served most of his tenure as an independent. He bolted the Democratic Party in 1967 after he refused to sign a loyalty oath committing him to support the party’s candidates in all elections. He said upon that decision that the oath was an effort to “force conservative officeholders to forsake their convictions, bow to the Democratic party, and support anyone who chooses to call himself a Democrat, even if it means supporting socialism, communism or the welfare state of the Great Society.”

Putney ran as an independent for the remainder of his political career, even after he joined the House Republican Caucus for organizational purposes in 1998. He flirted with the idea of formally joining the GOP in the early 1970s, but the Watergate scandal deterred him and many Byrd-era Democrats who no longer felt at home in the Democratic Party. Ultimately, party identification had little impact on Putney when he ran for his seat, because the voters knew him and he knew the voters.

“The voters recognized him,” said former 5th District U.S. congressman Virgil Goode, a Democrat-turned-independent-turned-Republican who served in the state Senate from 1973 to 1997. “He could have gotten elected on any party he ran on. It didn’t matter.”

Putney was born and raised in Big Island. He received his bachelor’s degree and law degree from Washington and Lee University, where he was a baseball star while pursuing his degrees. He also served in the Air Force from 1950 to 1954.

Conservatives recruited Putney, a Bedford attorney, to run in the Democratic primary in 1961 against an incumbent, Bedford pharmacist Charles Green. His legislative district encompassed Alleghany County, part of Bedford and Botetourt counties and the cities of Bedford and Covington.

When Putney entered the House in 1962, Democrats occupied 95 of the chamber’s 100 seats. He didn’t imagine he would be there more than a half-century later after the emergence of two-party competition and the realignment of the state’s political parties. Putney’s legislative career would span a period of economic and social transformation.

“Throughout his 52 years in the House, Lacey came to embody what this institution stands for: productive public service, individual integrity, sound stewardship and so much more,” House Speaker William Howell said in a statement. “He was dedicated to the legislature as a vital and necessary institution within state government, possessed an independent voice and always acquitted himself as a wise and effective legislator. He showed compassion for all with a caring and soft heart, was a man of action and responded to all his constituents with unconditional resolve exemplifying all that a true ‘citizen legislator’ can and should be.”

Putney served a brief stint as interim speaker in 2003, but his real power emanated from his 48 years on the Appropriations Committee, six as chairman, allowing him to keep a watchful eye on every penny that passed through the state budget. He also served as chairman of the House Privileges and Election Committee.

“He was great to work with,” Goode said. “He gave everyone a chance to have their say, and he listened to all sides before making a decision.”

A short list of Putney’s legacy would include many university buildings across the state, such as the Virginia Tech Carilion School of Medicine and Research Institute in Roanoke. He sponsored a $2.6-billion statewide bond package in 2008 that included funds for many higher education buildings. He also won a provision in that bond package that held college presidents accountable for avoiding cost overruns and established a clearer process for the state’s financing of academic buildings. He played a key role in securing more than $4.4 million in state funds for the completion of the National D-Day Memorial in Bedford.

“He’s a man who had more impact on the commonwealth than anyone in my memory,” Newman said. “Governors come and go, but Mr. Putney was there for half a century. And it’s the way he did it. He had a statesman-like quality that’s irreplaceable.”

Putney’s first wife, Elizabeth, died after a long struggle with Alzheimer’s disease in 2005, nearly 55 years after they married. He pressed through, and in 2007 he married Carmela Bills, the House information officer who was the primary contact for visitors to the state Capitol.

Putney batted away retirement rumors for years. In 2012, Putney was treated for early stage throat cancer. In January 2013, he suffered a minor stroke that forced him to miss the opening days of the upcoming legislative session. He returned to work and regained his health, but he announced in March that his 26th term would be his last.

Republican Terry Austin of Botetourt County succeeded Putney in the 19th District. Putney sent a congratulatory letter to Austin after the election. Austin replied with a letter of his own, telling Putney that he felt like a batter stepping up to the plate after the mighty Babe Ruth.

“Lacey was more of a statesman than a politician, and he represented his people well,” Austin said. “The 19th is Lacey’s district regardless of who has the seat,” Austin said.

A spacewalk was cancelled because of space debris. Is it becoming a real threat for astronauts?

A bizarre twist! Cotton candy was invented by who?

A bizarre twist! Cotton candy was invented by who?

BEDFORD — The Bedford County Board of Supervisors wants the state to designate a roughly 16-mile stretch of U.S. 221 — from the town of Bedford to Lynchburg — as the Lacey E. Putney Memorial Highway.

RICHMOND — Members of Virginia's House of Delegates are moving forward with a plan to honor their late colleague.

Lacey Putney at his desk in the House of Delegates in January 1998.

Lacey Putney of Bedford County, the longest-serving state legislator in Virginia’s history, died Saturday at the age of 89. He is shown here the year he announced his retirement.

Lacey Putney, the "lion of Bedford County," served in the House of Delegates for 52 years. This photo of Putney was taken in 1974.

Lacey Putney holds a campaign poster from his first run for the House of Delegates in 1961. This photo was taken in 1985. 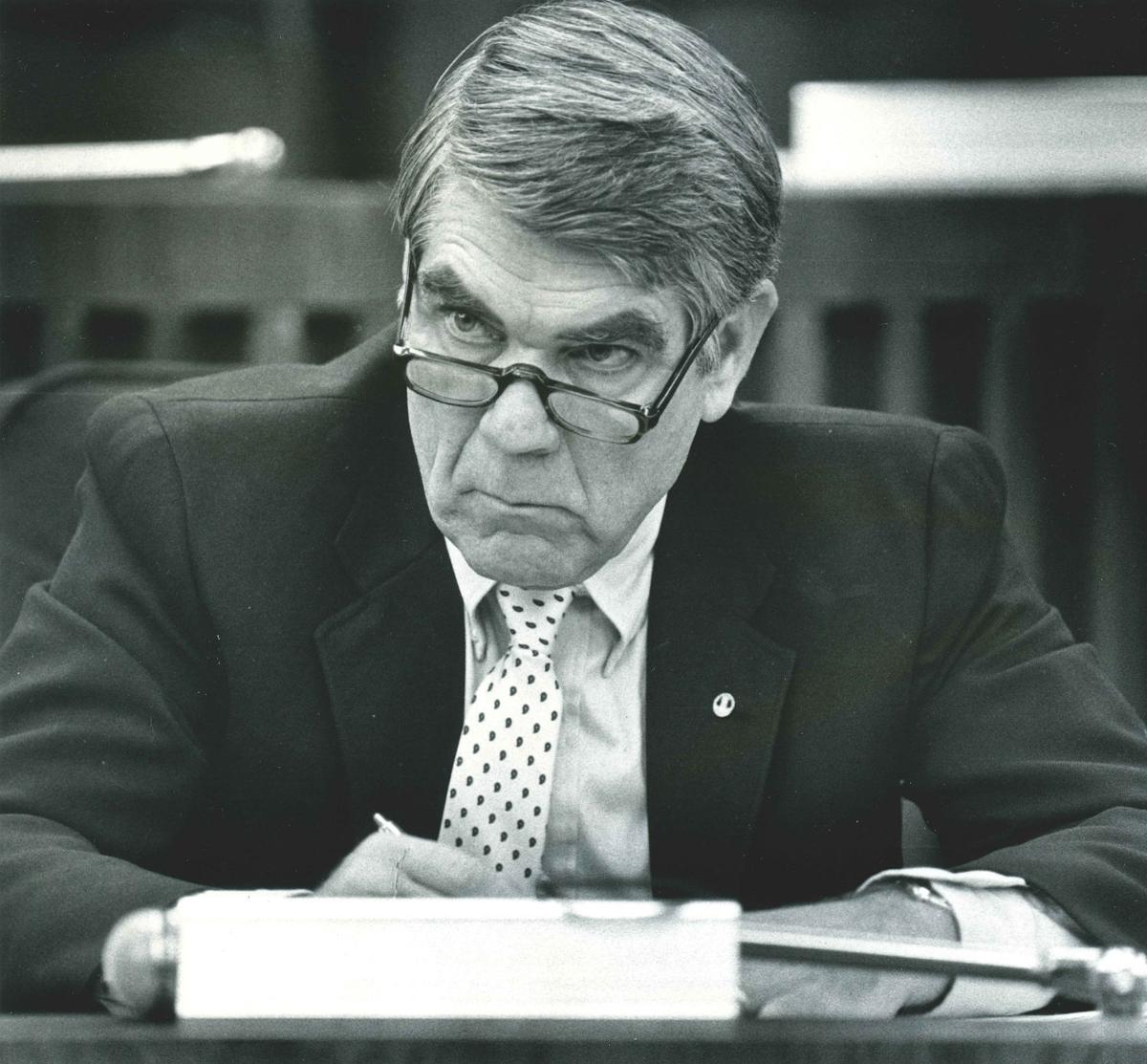 Lacey Putney listens to testimony at a House of Delegates hearing in 1986.