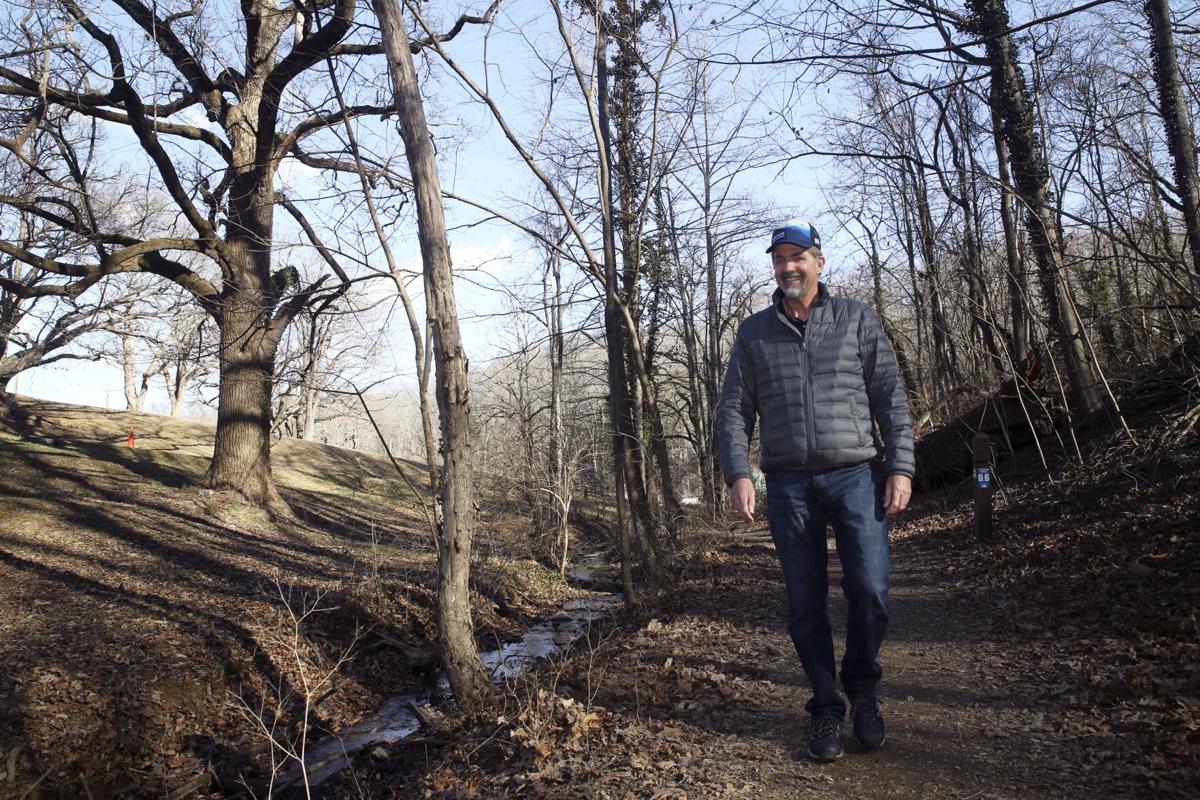 Roanoke’s first and only urban forester Dan Henry has helped create the city’s forestry program. Henry walks through the trail system at Fishburn Park on Jan. 22. A large elm tree is seen at left, one of his favorite trees in the park. 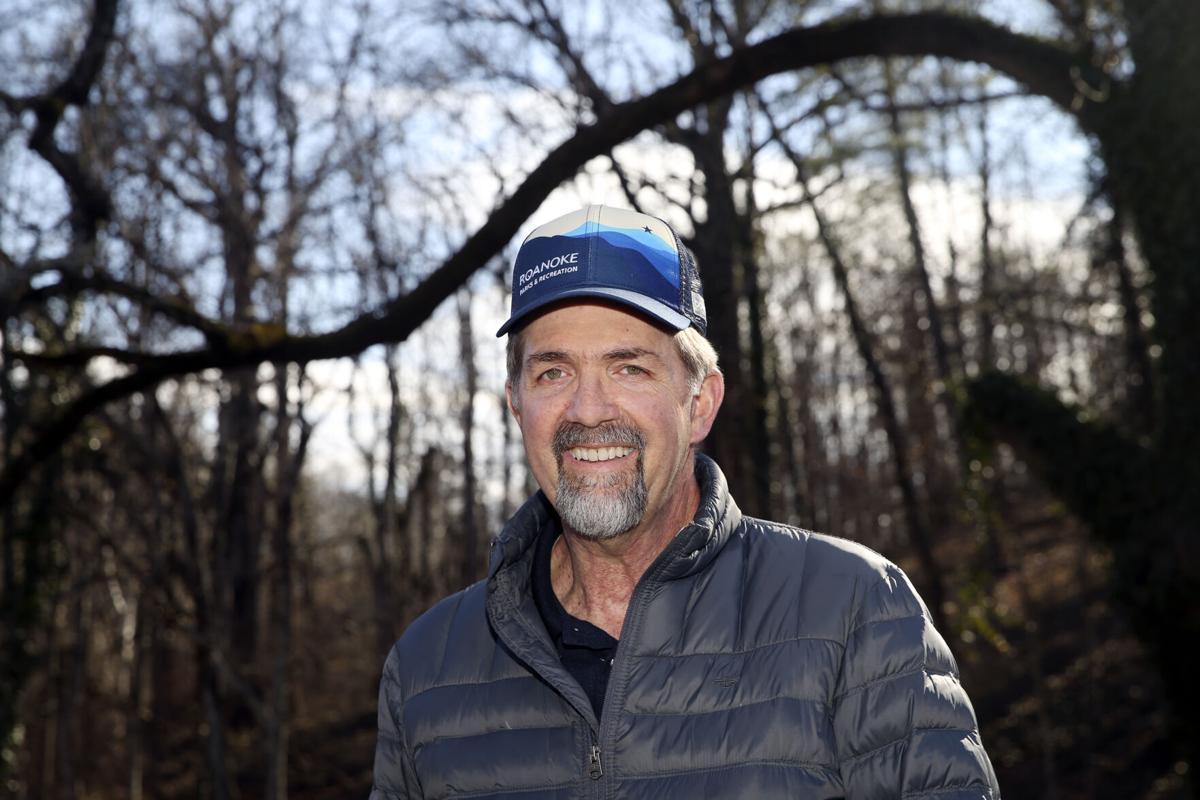 A tree can tell a story to Dan Henry.

The big tulip poplar in Fishburn Park, for example, paints a picture of what the surrounding area might have looked like when it sprouted decades ago. Instead of standing narrow and straight like a ship’s mast topped by a widened crown, the tall tree’s many limbs spread wide like outstretched arms, resembling a roomful of aunts coming to hug a child.

Henry, Roanoke’s longtime urban forester, said the tree had grown wide, filling space around it, because the trees that cover the park’s hillsides probably weren’t there when the tulip poplar was young.

“All that was probably wide open,” Henry said, motioning toward the tree-covered hill. “You wouldn’t have seen limbs spread out like that in the woods. That might have been all fields or grass over there. That tree would have been a bean pole.”

Perhaps not all of the city’s 20,000 or so trees have such stories, but each plays a role in Roanoke’s “urban forest.” For more than 30 years, Henry’s job was to make sure that the forest was healthy, the native species were thriving and the tree canopy that provided shade was full and lush. He retired in December, having helped Roanoke enhance its image as a green city.

Henry was the first professional forester hired by Roanoke when he came on board in 1989. At that time, urban tree management was a blossoming field.

For decades, Roanoke, like many other American cities, performed only routine maintenance when it came to trees. If a tree fell or posed a public hazard, work crews removed it. Plantings were often left to private developers or homeowners. That was pretty much the extent of Roanoke’s care for its trees.

Henry devised a management program that sought to care for and increase the number of trees that grew on city-owned property. Henry and his cohorts understood that trees held immense ecological value, which included reducing streambank erosion, limiting stormwater runoff and providing shade in the steamy asphalt jungle of the city, not to mention adding a little beauty and nature to neighborhoods.

“Dan has had a tremendous impact,” said Michael Clark, director of Roanoke’s Parks and Recreation Department, which is where Henry worked. Clark has known Henry since 2007. Before Henry arrived, “the city didn’t have a plan for forest management or street trees, but thanks to his professionalism and expertise, he kicked off the urban forests program.”

Relying on grant money that seemed to grow on trees before the Great Recession hit around 2008, Henry guided an inventory of the city’s trees and helped create an urban forestry task force that eventually increased the city’s tree canopy — the coverage of trees, limbs and leaves as viewed from above — from 32% to 48%. The U.S. Department of Agriculture calls 40% coverage a healthy urban canopy.

In recent years, parks and recreation’s urban forestry team has played a large role in development of the city greenway system, including scores of plantings along the Roanoke River Greenway.

In fact, the city’s urban forestry plan calls trees essential to the city’s economy as Roanoke positions itself as a hub of outdoors recreation.

“Roanoke’s economic future will depend on its perception as a ‘green’ or outdoors city,” the plan states. “Visitors and residents need to see more trees at [c]ity gateways, major corridors, and within public and privately owned parcels.”

“He had a lot of influence over the Roanoke River Greenway,” Liz Belcher, the city’s greenways coordinator, said of Henry’s handiwork along the paved trails. “That included picking species that would survive and look good. He spent his career beautifying Roanoke. He’s a great guy and a person who also gave you straight talk.”

Tall and easygoing, Henry is a guy who loves to talk about trees and his job.

“I look at trees as a community, in concert together,” he said. “A walk in the woods is my favorite outing. I can spend as much time looking at a tree rotting on the ground as one standing next to it.”

Henry, 60, first worked for a Roanoke tree-care company after graduating from Virginia Tech with a forestry degree in 1982. He had grown up in Duchess County, New York, near Poughkeepsie in the Hudson Valley, where he spent many youthful days hiking and camping in the woods.

“I didn’t know what I wanted to be when I grew up,” said Henry, the first member of his family to attend college. “So I just thought about what interested me and moved in that direction. Nobody had heard of Virginia Tech where I lived. Back in those days, I found out about it by reading a trade journal.”

When Henry sought Roanoke’s urban forester job in 1989, his boss at the tree company could not understand why the young man wanted to leave the business world for a job caring for trees growing among pavement and concrete. Henry saw it as a chance to shape a landscape.

“There were plenty of opportunities to move up the corporate ladder,” he said, “but there was no real arborculture back then.” He wanted to look at trees as they connected to communities and neighborhoods.

In the early days, Henry worked closely with a number of people, especially Marilyn Arbogast, the city’s horticulturist, and Charlie Blankenship, a retired forester. Arbogast had lobbied city officials to hire a professional forester and Blankenship helped put together the forestry task force.

“These were people with a passion for urban forestry,” Henry said.

Over the years, he has battled foes both natural and financial. Pests and diseases have decimated American forests, even in the cities. The emerald ash borer is killing ashes, woolly adelgids are wiping out native hemlocks and Dutch elm disease has devastated American elms. Roanoke has preserved some of its majestic elms with injections of fungicide.

Some of those protected trees include three century-old elms lining Jefferson Street in front of the Roanoke Main Library. Nearby Elm Avenue and Elmwood Park derived their names from previous American elms that filled the sky with their enormous crowns in the 1800s. Five other elms have been removed from Jefferson Street over the past 20 years due to disease and age.

Urban tree care faced the budget ax in the 2000s, when the recession chopped funds for maintenance and plantings. That’s when Henry oversaw the founding of Roanoke Tree Stewards, an initiative for which trained citizens handle routing care of the city’s trees.

The stewardship program “has been very successful,” Clark said. “Every class we offer fills up.”

Roanoke has been recognized as a Tree City USA by the Arbor Day Foundation for more than 20 years thanks to Henry and his team. The honor goes to cities that spend resources caring for trees and that understand the ecological and economic value of trees.

He and his wife, Shelly, who also recently retired, have two adult daughters, and they will spend their time split between Roanoke and visiting two grandchildren in North Carolina. He retired with the title of parks manager, having handed off forestry duties to Bill West, who is currently the city’s urban forester.

“I just wanted to put people together to connect and collaborate on urban projects,” Henry said. “People are passionate about trees.”

The familiar silver-gray-and-blue police sedans driven by state troopers on Virginia's roadways are being phased out, perhaps for good, as the department transitions its fleet to Ford Interceptor Sport Utility Vehicles as a matter of necessity.

After claims of discord and sexism, Virginia Tech to dissolve Student Government Association

Discussions have led to another path.

Roanoke’s first and only urban forester Dan Henry has helped create the city’s forestry program. Henry walks through the trail system at Fishburn Park on Jan. 22. A large elm tree is seen at left, one of his favorite trees in the park.