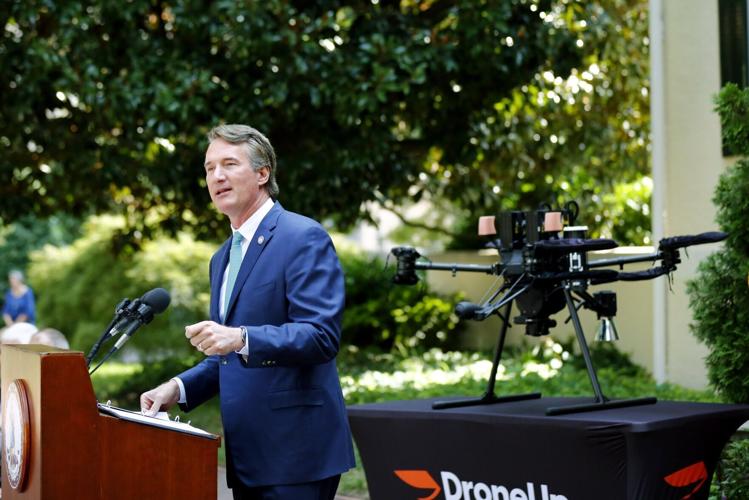 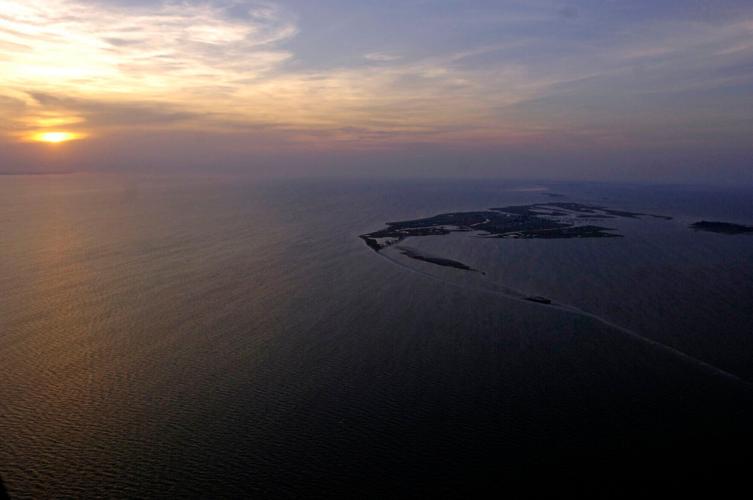 Tangier Island sits alone near the middle of the Chesapeake Bay at sunset. 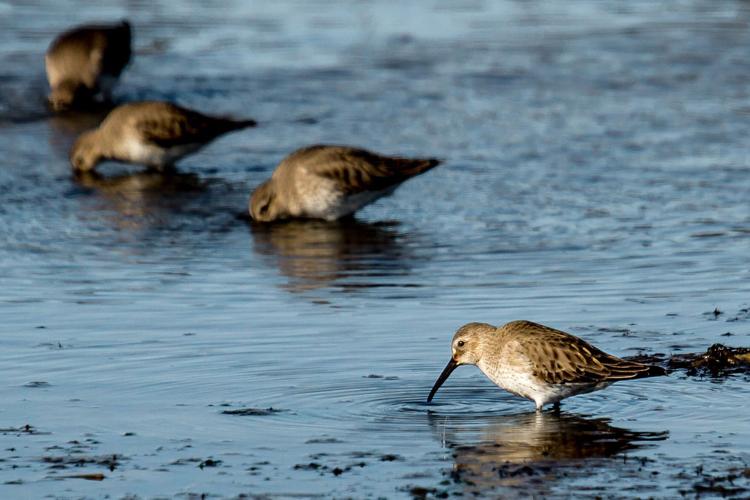 Sanderlings forage in the Chesapeake Bay. 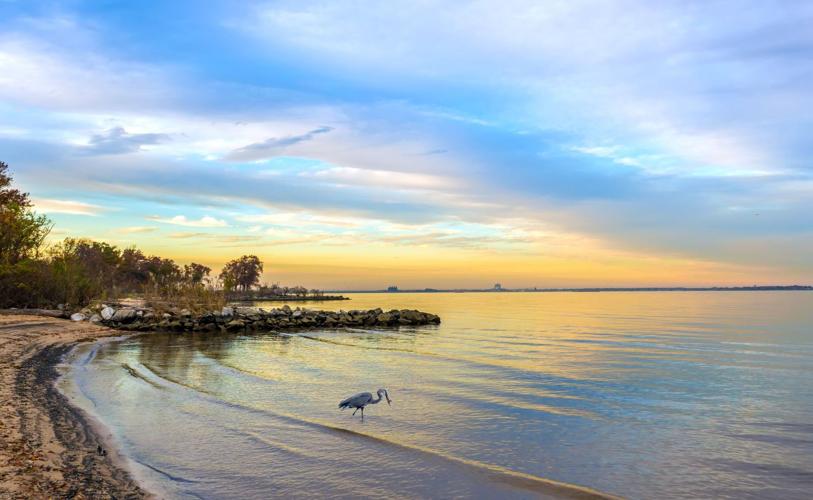 A Great Blue Heron catches a fish on a Chesapeake Bay beach at sunset. 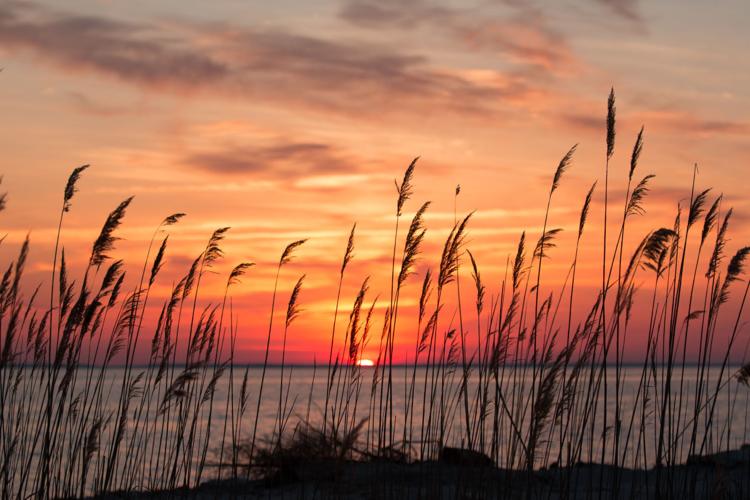 Virginia’s promise to cut pollution flowing into the Chesapeake Bay is likely to miss its 2025 deadline, and Gov. Glenn Youngkin said speeding up work is a top priority.

But he’s not sure that the new push he’s calling on state agencies to make, including new demands on the state budget, will be enough to make up for lost time.

“If somebody tells you that you have got to drive 400 miles an hour to hit your goal and you can really only drive at 75 … I think we find ourselves in a circumstance like that,” he said in a recent interview with the Richmond Times-Dispatch.

“I’m not tapping the brakes," he said. "I’m just acknowledging that we can drive really fast and come up short."

The state’s current goals, set in 2019, call for a nearly 17% reduction in nitrogen flowing into the Bay as well as a 15% decline in phosphorus.

Sediment in runoff, much of it from building sites and erosion, clouds the water, blocking sunlight that underwater plants need. Lack of oxygen and plant life is devastating for fish, shellfish and shoreline wildlife.

It’s not the targets that are the problem “but the levels had been, I think unrealistically signed up to … too fast and too high,” Youngkin said.

He said previous Gov. Ralph Northam's administration "left us with a program that’s unrealistic and disconnected between resources and trust."

Democrats are generally skeptical about Youngkin's environmental stands. Dozens of Democrats in the legislature are battling his efforts to pull Virginia out of the Regional Greenhouse Gas Initiative and say his unsuccessful bid to name former Trump administration Environmental Protection Agency director Andrew Wheeler as Secretary of Natural Resources shows a lack of care for the environment.

When it comes to the Bay, Youngkin said he’s pushing his administration for a detailed plan for cutting pollution, with specific objectives and targets for each year remaining, as well as specific funding and programs, to move the cleanup faster than it has been going.

“I put an emphasis on the agricultural side of things, best management practices is one that can have the largest effect on downstream and there was not a great level of trust in the previous administration in the ag community,” he said.

“Soil and water conservation districts have a lot to say about this. We added incremental funding into the budget and I think we are off to a really good start … We’re going to shore that up with resources,” he said, with the kind of funding necessary to put more farming best-management practices into place.

The Chesapeake Bay Foundation estimates that nitrogen runoff from farms and city and suburban streets and storm sewers is more than 25% off the target from where Virginia needs to be to hit its 2025 goals.

“Without finding ways to massively accelerate the adoption of conservation practices on farms, it will not meet its targets for agriculture by the 2025 deadline,” the foundation said.

The state’s funding for its agricultural Best Management Practices Cost Share Assistance program is holding fairly steady at $8.7 million a year for this year and next. However, the appropriation from the Virginia Natural Resources Commitment Fund jumped from $18.2 million to $164.7 million for matching grants for farmers in the Bay watershed to take steps to reduce runoff.

The foundation said Virginia is lagging with planting buffers along streams, rivers and the Bay, an important way for farmers to keep nitrogen, phosphorus and sediment from flowing into waterways. Virginians need to plant more than 6,000 acres a year, but there were only 257 acres planted in 2020, the latest year for which data are available.

But there are other challenges away from farmland, the foundation says. Although Virginia is roughly on target for cutting pollution from city and suburban wastewater plants, it needs to upgrade major facilities in the James and York river watersheds that release high levels of nitrogen pollution.

And continuing development means more pollution pressure from wastewater and smaller acreages of forests to absorb runoff and prevent erosion, the foundation said.

Youngkin has said he’s still working on finding the right balance between conservation and the development necessary to expand affordable housing – another top priority as he prepares his budget and legislation package for the General Assembly session that starts in January.

“I’m kind of a Virginia Beach guy," said Youngkin, whose family moved from Chesterfield County to Virginia Beach when he was a teenager. "I have this real passion for the coast, for the Bay.”

But, he added. "We’re starting from further back than we had even thought we were and therefore I do believe 2025 goals are going to be very hard to hit. ... I think we’re going to need more time. ...

"I’m just cautioning everybody that if we come up short don’t be surprised," he said. "It’s not going to be from a lack of effort and lack of desire."

Mussel-ing ahead with a clean water effort

Wherever they plant themselves — from way up in the mountain headwaters of the tributary rivers to just a bit downstream from Richmond  —  freshwater mussels can help clean the Chesapeake Bay in a major way.

Tangier Island sits alone near the middle of the Chesapeake Bay at sunset.

Sanderlings forage in the Chesapeake Bay.

A Great Blue Heron catches a fish on a Chesapeake Bay beach at sunset.