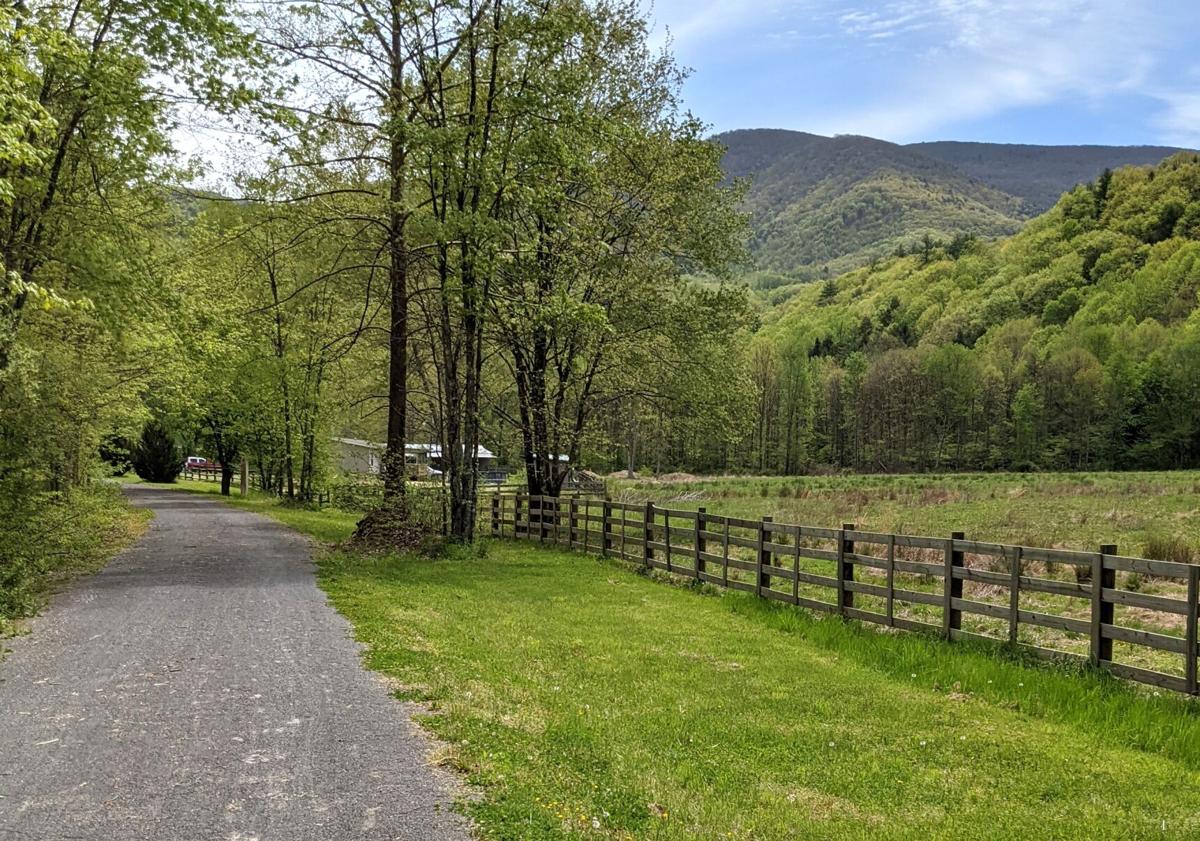 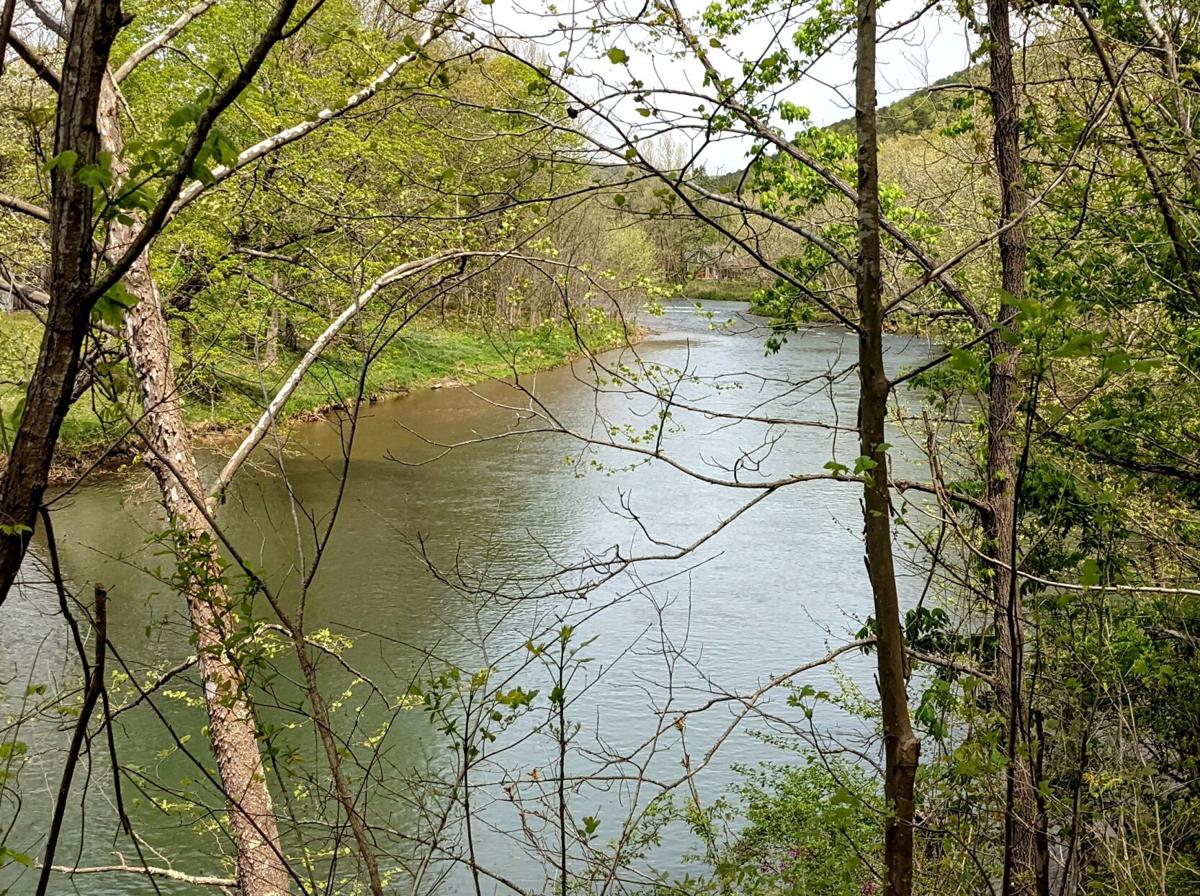 The 18-mile stretch of Jackson River between Gathright Dam and the city of Covington is one of a handful of streams in Virginia where anglers can fish for wild brown and wild rainbow trout. South and east of Covington, the Jackson joins the Cowpasture River near Iron Gate to form the James River, Virginia’s longest. The James flows 348 miles to the Chesapeake Bay. 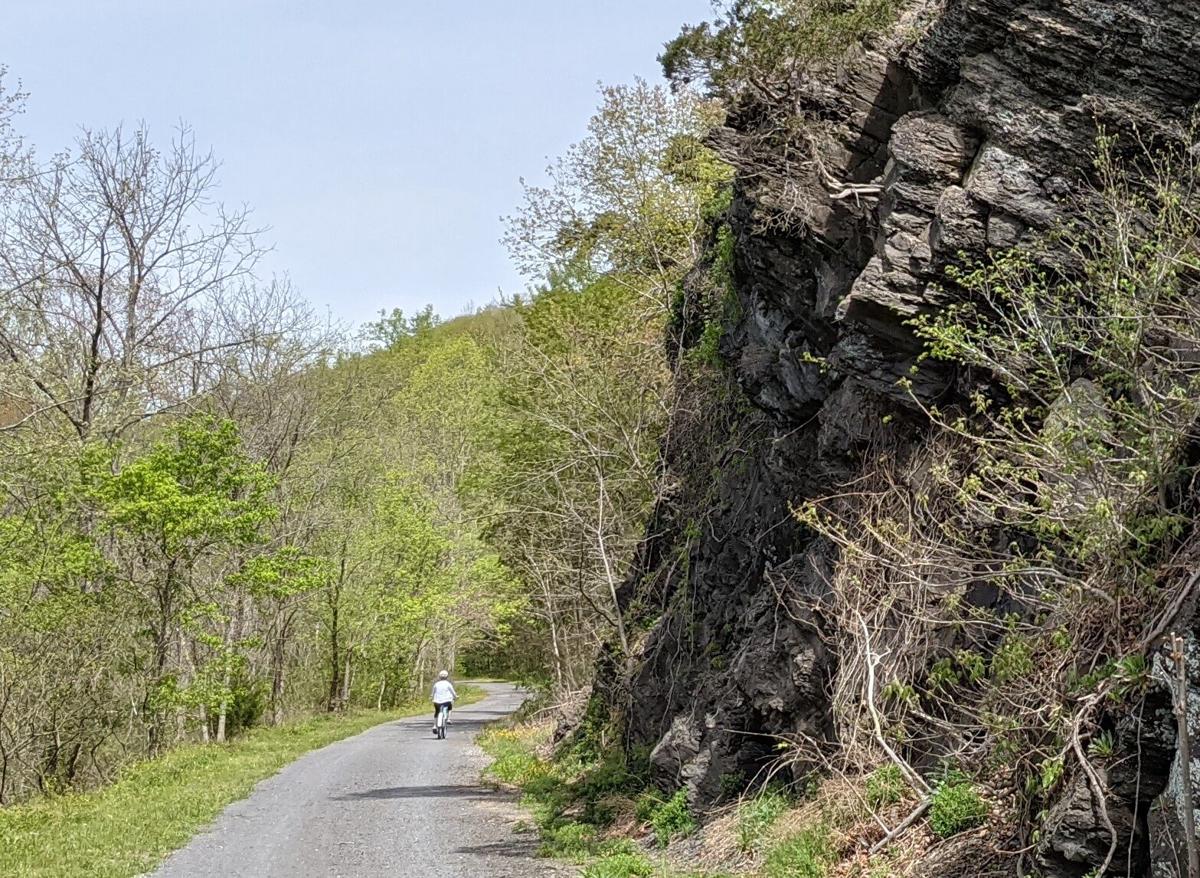 Donna Casey rides her baby-blue beach-cruiser bike past a towering outcropping along the Jackson River Scenic Trail north of Covington. "I don't want my picture taken," she said. Snap! 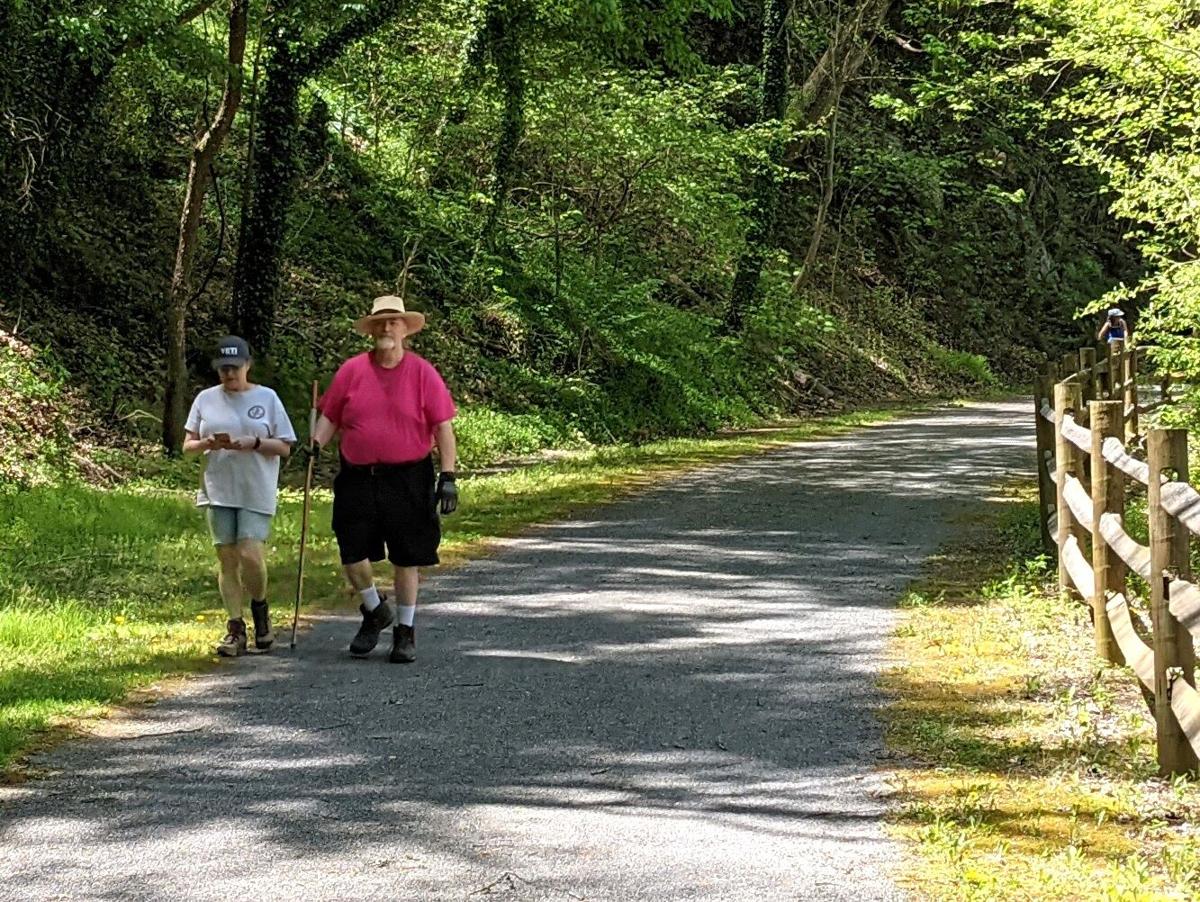 A couple walks north along the Jackson River Scenic Trail. It was built along an abandoned C&O Railroad line from Covington to railbed. In days long past, the spur used to transport passengers from Covington to The Homestead in Hot Springs.

From 1891 until 1969, you could board a passenger train in Covington and ride it to The Homestead in Bath County, along a C&O Railway spur known as the Hot Springs branch. Heading north, it followed the Jackson River, one of a handful of wild trout streams left in Virginia.

Brown and rainbow trout, some of them a foot to 18 inches long, still swim that stretch of water below Gathright Dam. But the locomotives and tracks are long gone. In their place are crushed cinders, modern bathrooms, parking areas and picnic tables.

Those comprise one of Western Virginia’s most recent rails-to-trails projects, the 14.4-mile (and counting) Jackson River Scenic Trail. It’s a bit more than an hour’s drive from Roanoke. Donna and I made our first visit Sunday — and it won’t be our last.

This is the third adventure trail developed on abandoned railroad beds that I’m aware of in Western Virginia. The other two — the magnificent 34-mile Virginia Creeper and the 57-mile New River Trail — are older, longer and far better known.

Like those, the Jackson River Scenic Trail is no shirker when it comes to a day trip into nature. And because it’s lesser known, it sports many fewer people than the others — especially the Virginia Creeper’s Whitetop-to-Damascus leg, which can get insanely crowded on nice weekends.

Edged by blue phlox, bright yellow buttercups and an array of other wildflowers, the trail begins just north of Covington, and is a literal a stone’s throw off U.S. 220 at Dressler Drive. It continues almost to the border of Alleghany and Bath counties.

Mountains tower in the distance as the trail ambles past idyllic pastureland, quiet fishing camps and jagged rock outcroppings. Some of the latter are the size of buildings in downtown Roanoke.

“It’s so … silent,” Donna said at one point when we stopped. Aside from the softly gurgling river below, the only sounds we could hear were birds calling to each other.

As with most rails-to-trails projects, the Jackson River Scenic Trail opened in stages. Alleghany County cut the ribbon on the first two miles back in 2010, and another 5.2-mile section opened in 2012. In 2017, the county added 6.5 miles stretching north, plus just under a mile on the southern end. That connected to the city of Covington’s sidewalk system.

Phase 5 is being worked on now, said Chad Williams, Alleghany County’s director of parks and recreation. It’ll run 1.6 miles into Bath County and finish at the site of the old Lower Cascades Golf Course, which the Homestead shuttered in 2013.

That’ll bring the total length to 16 miles. Whether or not it’s extended farther north will be up to Bath County. Williams said a large stretch of the railroad right of way in Bath County is owned by descendants of Sam Snead, the late professional golfer.

“Any day like today, even if it’s cloudy, you can go to the Intervale parking lot [the southern terminus] and see cars from out of state, or the Roanoke people, or the Lynchburg people,” Williams said.

You could ride a skinny-wheeled road bike on the trail, but I wouldn’t recommend that because the cinders are still soft in some places, particularly on the trail’s edges. A mountain bike, a hybrid or a fat-tired beach cruiser (which is what Donna rides) are better alternatives.

Alleghany County recently opened an outfitters building at the Intervale parking lot called Alleghany Outdoors. It’s operated by Buchanan-based Twin Rivers Outfitters, which has been offering canoeing, kayaking and shuttling services on the upper James River in Buchanan since 1978.

Alleghany Outdoors rents bikes, kayaks and tubes and also offers a shuttle service for paddlers and pedalers who wish to travel only one direction. There’s also covered picnicking facilities and a grill — bring your own charcoal.

For folks who want to make a weekend of it, there’s a bed and breakfast, the Evergreen Inn, that opened in 2019 and offers four apartments that sleep up to six people. Those range from $99 to $125 per night and three of them offer full kitchens.

Williams told me the trail was conceived in the late 1980s under then-Alleghany County administrator Tammy Stephenson. The county paid $942,000 for the right of way from Covington to the Bath County line. Like many greenway projects, it took decades to fruition.

The county developed the trail using $5 million in federal and state grants, some of which, oddly, came from fines paid by drivers cited for open-container alcohol violations. The most recent grant came from the CARES Act Congress enacted as much of American “shut down” last year at the beginning of the COVID-19 pandemic, Williams said.

Though there’s a slight, average 1% grade headed north, that was barely discernible as we pedaled. Along the way are cliff views, river views and pathways for fishermen to access the Jackson.

“Some people say it’s uphill both ways,” Williams told me. “There’s a slight grade going north that you don’t even notice.” I can vouch his description is accurate.

Donna and got there around 11 a.m. Sunday, unloaded our bikes and hit the trail shortly thereafter. I don’t think we saw anyone else for the first five miles or so. Around the seven-mile mark, her unprepared derriere decided it was time for us to turn around and head back to the car.

We did not make it to Falling Spring, a well-known waterfall north of the halfway point. That may be the trail’s most scenic point.

We’ll save that for the next jaunt up to the Jackson River Scenic Trail. It’s the kind of place you’ll want to visit more than once — and its convenience to the Star City makes that a cinch.

• What: A (so far) 14.4-mile trail that hugs the Jackson River. Plans are underway to extend it another 1.6 miles, to the old Lower Cascades golf course on the north side of Warm Springs Mountain.

• Where: Just north of Covington -- make a left off U.S. 220 onto Dressler Drive and you can't miss the Intervale parking area at the southern terminus.

CASEY: Readers write about rail-trails in the Roanoke region

In a recent column about the Jackson River Scenic Trail in Alleghany County, I wrote it was the newest among three-rail-trails I was aware of in Western Virginia. Thanks to readers, we now know I neglected a few.

The 18-mile stretch of Jackson River between Gathright Dam and the city of Covington is one of a handful of streams in Virginia where anglers can fish for wild brown and wild rainbow trout. South and east of Covington, the Jackson joins the Cowpasture River near Iron Gate to form the James River, Virginia’s longest. The James flows 348 miles to the Chesapeake Bay.

Donna Casey rides her baby-blue beach-cruiser bike past a towering outcropping along the Jackson River Scenic Trail north of Covington. "I don't want my picture taken," she said. Snap!

A couple walks north along the Jackson River Scenic Trail. It was built along an abandoned C&O Railroad line from Covington to railbed. In days long past, the spur used to transport passengers from Covington to The Homestead in Hot Springs.