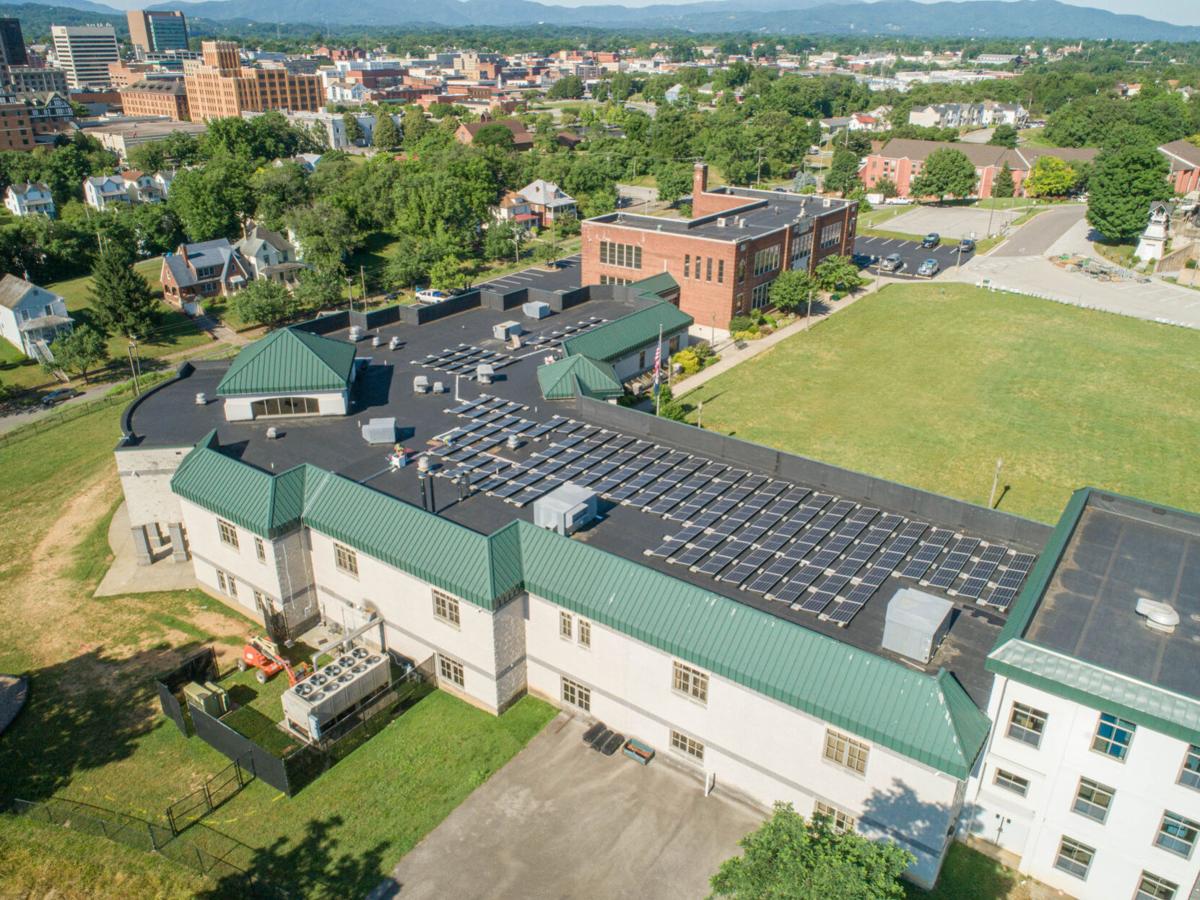 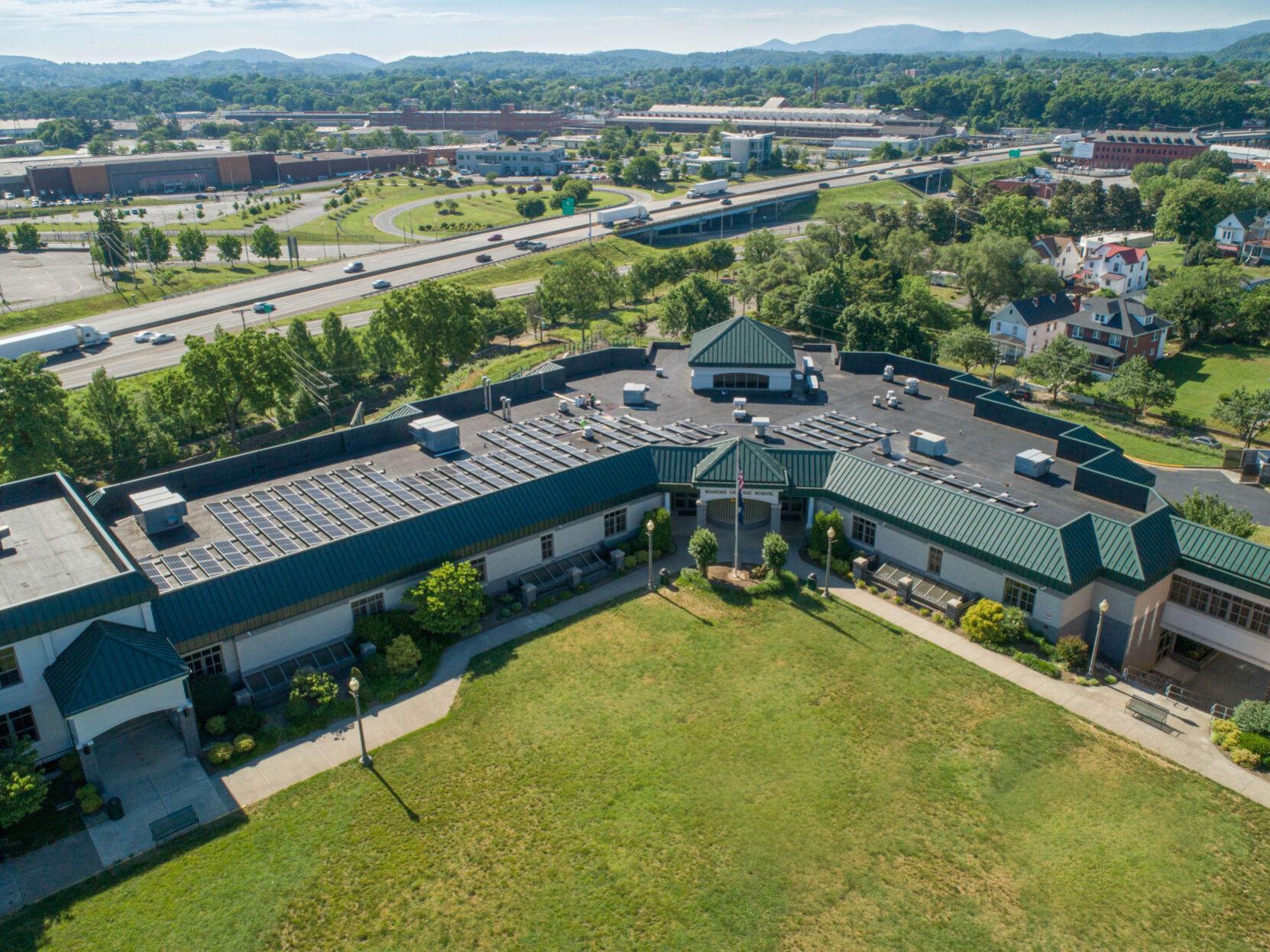 Solar panels were installed on the roof of Roanoke Catholic High School.

When Father John Grace, pastor of Immaculate Conception Catholic Church in Hampton, talks about the hundreds of solar panels that now cover the roof of the church sanctuary, he talks not just about saving money on electricity, but protecting God’s creation.

“That is adding something to the quality of life for the future,” Grace said of the solar panel array that was installed in July 2019.

Grace said it was a project his parishioners embraced and now look at with pride.

“I have got a lot of retirees,” in the parish, he said. When the idea of installing solar panels was first proposed, “they said, ‘Let’s go for it,’ which you might not expect from an older parish, but they did.”

“That, plus the energy savings, has allowed me to say this has been a great success,” he said.

The solar array at Immaculate Conception Church was the first of at least seven solar energy projects that have been completed or are being planned within the Catholic Diocese of Richmond, which includes churches, schools and nursing facilities across most of Virginia.

Solar arrays also have been installed at Roanoke Catholic High School and at the Church of St. Therese in Chesapeake.

Construction is slated to start soon on solar power installations at the Diocese of Richmond Pastoral Center in Henrico County and at Our Lady of Lourdes Catholic School on Woodman Road.

To plan and roll out the projects, the diocese is working in partnership with Catholic Energies, a service of the Washington, D.C.-based nonprofit Catholic Climate Covenant, which helps guide the U.S. Catholic Church’s response on climate change.

Catholic Energies has been able to secure almost $3 million in financing for the installation of solar arrays in the diocese, said Dan Last, Catholic Energies’ program manager.

Catholic Energies helps arrange the projects under power purchase agreements, or PPAs. The nonprofit finds third-party investors to pay for the installation of a solar array at no upfront cost to a church. The investors receive tax credits, plus regular payments from the church for the solar-generated power, which is generally at a discounted rate compared to their current utility power rate.

That allows a church to save on energy costs. Over time, the church has the option to purchase the solar panel system outright.

“The long-term goal is to make sure that the Catholic Church is as responsive as anybody to the calling to take care of God’s creation,” Last said. “This program is a key part of that.”

Page Gravely, who manages client services for Catholic Energies, said the project can serve as a model for how other nonprofits can utilize solar energy.

“A lot of solar developers have, frankly ignored that market,” he said. “The nonprofit market is so large. There are a lot of nonprofits that own real estate and should not be excluded from this.”

The rooftop array at the Pastoral Center is expected to generate about 317,000 kilowatt-hours of clean electricity per year, which along with the installation of LED lighting at the center will offset about 84% of its annual historical energy requirement. The estimated reduction in its carbon footprint will be about 11,000 metric tons of CO2 over 25 years.

Combined, the Virginia projects are expected to generate more than 1.6 million kilowatt-hours of clean electricity each year for decades while saving the churches and schools more than $2 million in energy operating costs.

Charles Mikell, director of real estate for the diocese, said he was skeptical about the viability of the solar projects at first.

“I’m old-school,” said Mikell, who joined the diocese in 2019 after a long career in civil engineering working on major construction projects around the country.

“I really had to be sold from a financial standpoint and from an electrical standpoint,” he said. “The more and more research I did and actually talked with people that had this installed before, they said, ‘It really does help, our electric bill has gone down.’”

“The larger the energy demand, the greater the savings,” he said.

“I was skeptical,” he said. “Now I am fully in.” Mikell said he hopes that about 70% of the roughly 170 facilities in the diocese can eventually install solar power.

Beginning July 1 it will be legal in Virginia for an adult to possess up to an ounce of marijuana, and that change in the law is forcing K-9 p…

The Board of Visitors approved a statement of free speech principles.

Solar panels were installed on the roof of Roanoke Catholic High School.