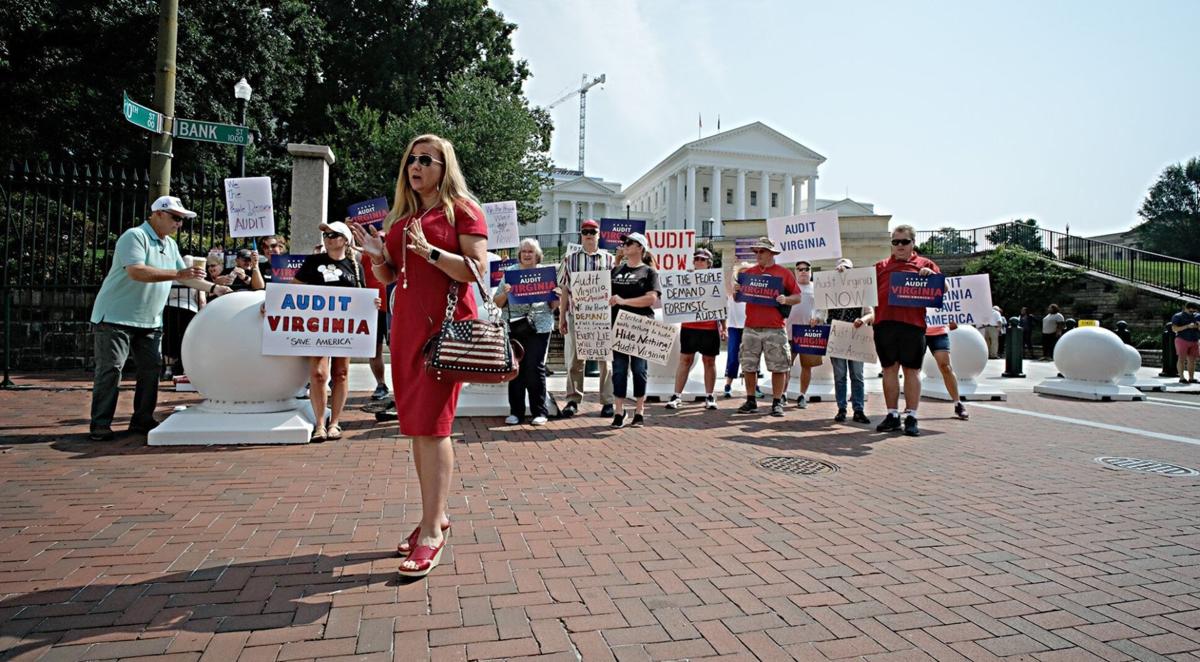 Sen. Amanda Chase, R-Chesterfield, makes a statement to the media as supporters stand behind her outside the Virginia state Capitol in Richmond on Monday, the first day of the special session. 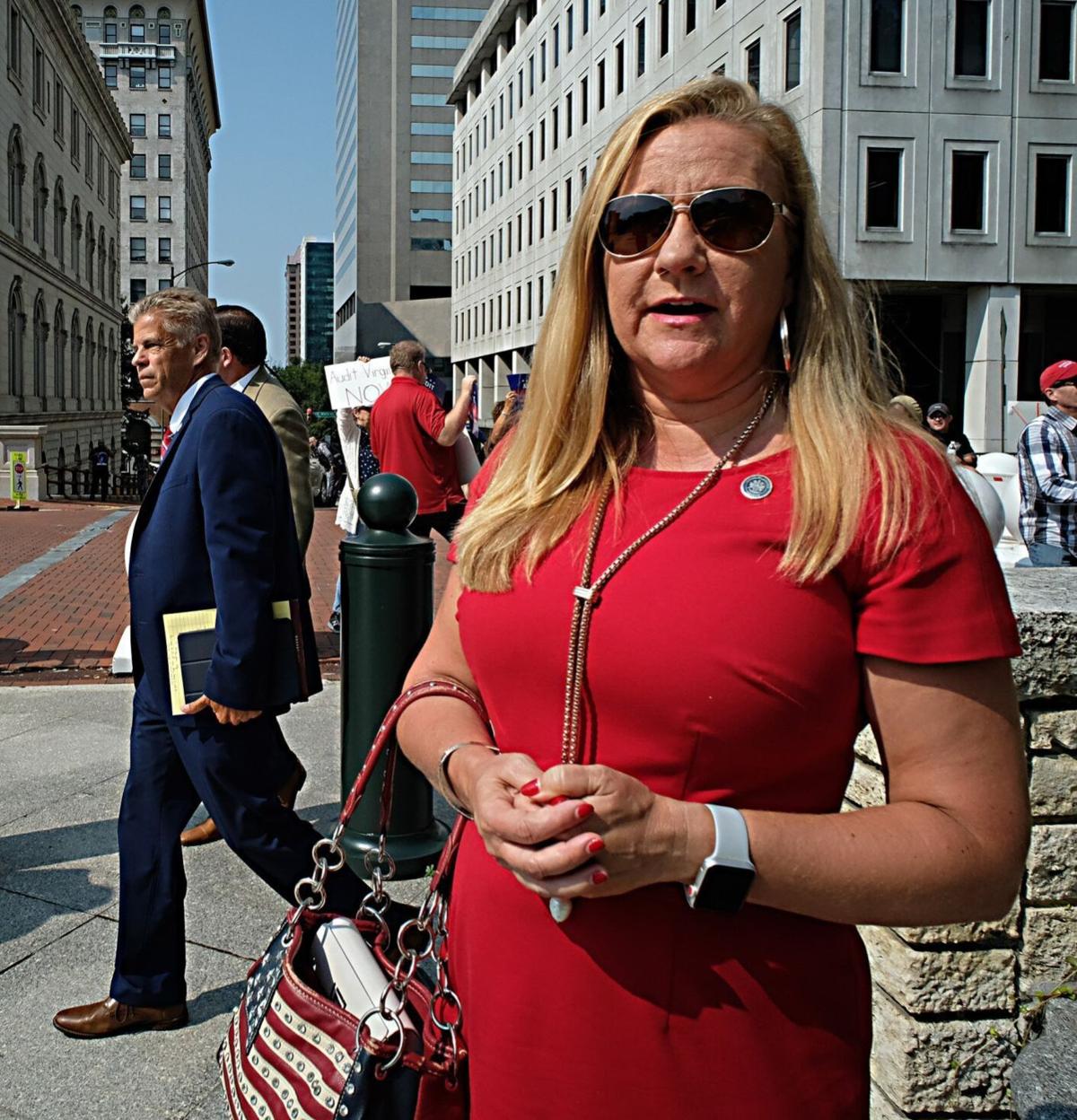 Sen. Amanda Chase, R-Chesterfield, right, makes a statement to the media as Del. Kirk Cox, R-Colonial Heights, left, walks by to enter the Virginia State Capitol in Richmond on Monday, the first day of the General Assembly’s special session. 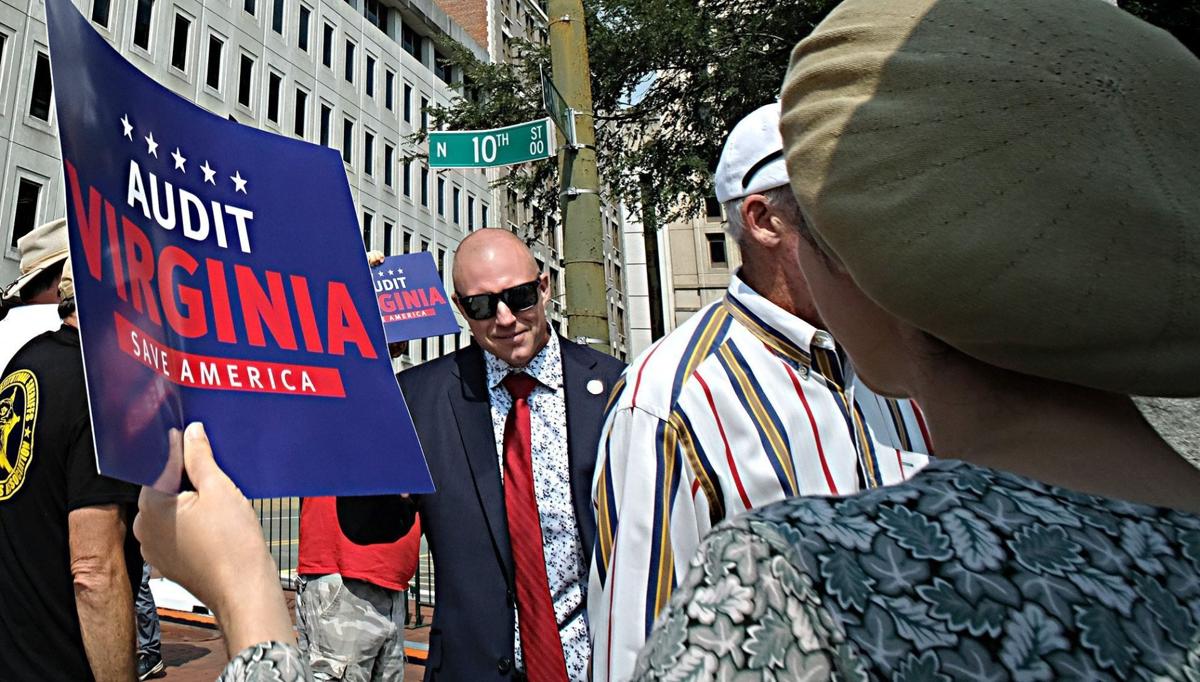 This story has been updated to note that neither Winsome Sears, the Republican candidate for lieutenant governor, nor Del. Jason Miyares, the GOP nominee for attorney general, will attend Saturday's "election integrity" rally at Liberty University.

Sen. Amanda Chase, R-Chesterfield, rallied with several dozen supporters outside the state Capitol on Monday to call for a “forensic audit” of Virginia’s electoral process.

Since the November election, former President Donald Trump and many of his supporters have continued to promote debunked or unsubstantiated claims of election fraud that election officials and courts have rejected. Democrat Joe Biden beat Trump in Virginia by 10 percentage points.

“It’s so imperative that we make 100% sure that voters have 100% confidence in our election process,” Chase said at the Capitol on Monday, speaking in front of supporters holding homemade signs.

“It’s important that we audit Virginia. It’s important we have a forensic audit, not the faux audit that the State Board of Elections did.”

Chase said that when the General Assembly makes decisions, Virginians need to know that “these people are elected by we the people” and that the decisions they make “are what the people want.”

In March, the Virginia Department of Elections said election administrators around the state had completed an audit of ballot scanner machines used in the November elections in which Biden defeated Trump and Sen. Mark Warner, D-Va., beat Republican Daniel Gade.

“The audit confirmed that the original count of the votes accurately portrayed the winners of the election in Virginia for United States President and Senate,” the department said in a March 2 statement.

Monday’s rally on the first day of the legislature’s special session is the latest in a series of recent GOP efforts in Virginia to raise questions about Virginia’s elections.

This coming Saturday, Glenn Youngkin, the GOP nominee for governor, is expected to attend an “election integrity” rally at Liberty University in Lynchburg.

Neither Winsome Sears, the Republican candidate for lieutenant governor, nor Del. Jason Miyares, the GOP nominee for attorney general, will be attending the event.

Former Gov. Terry McAuliffe, the Democratic nominee for governor, has called on Youngkin to pull out of the rally, saying it is a forum for “peddling Donald Trump’s lies” and is inspired by “Trump’s conspiracy theory that led to a deadly insurrection at the U.S. Capitol.”

Chase, who unsuccessfully sought the GOP nomination for governor, spoke at a Jan. 6 rally in Washington and left before the violent assault at the U.S. Capitol.

She was later censured by the Virginia Senate for a pattern of “unacceptable conduct.”

In June, Chase visited Arizona, site of a Republican-led “forensic audit” of election returns. Biden beat Trump in Arizona by about 10,000 votes.

On Monday, Chase also decried mask mandates for students, saying parents should make the decision, and vaccination requirements that some employers have put in place.

Just more than three years after the shooting death of a Forest man, the last chapter in his murder case was closed Friday with the sentencing of the fourth and final defendant involved in what’s been described as a robbery turned fatal.

A woman has filed a $75 million lawsuit against two Bedford County-based nonprofits and their president, claiming he repeatedly sexually abuse…

Sen. Amanda Chase, R-Chesterfield, makes a statement to the media as supporters stand behind her outside the Virginia state Capitol in Richmond on Monday, the first day of the special session.

Sen. Amanda Chase, R-Chesterfield, right, makes a statement to the media as Del. Kirk Cox, R-Colonial Heights, left, walks by to enter the Virginia State Capitol in Richmond on Monday, the first day of the General Assembly’s special session.