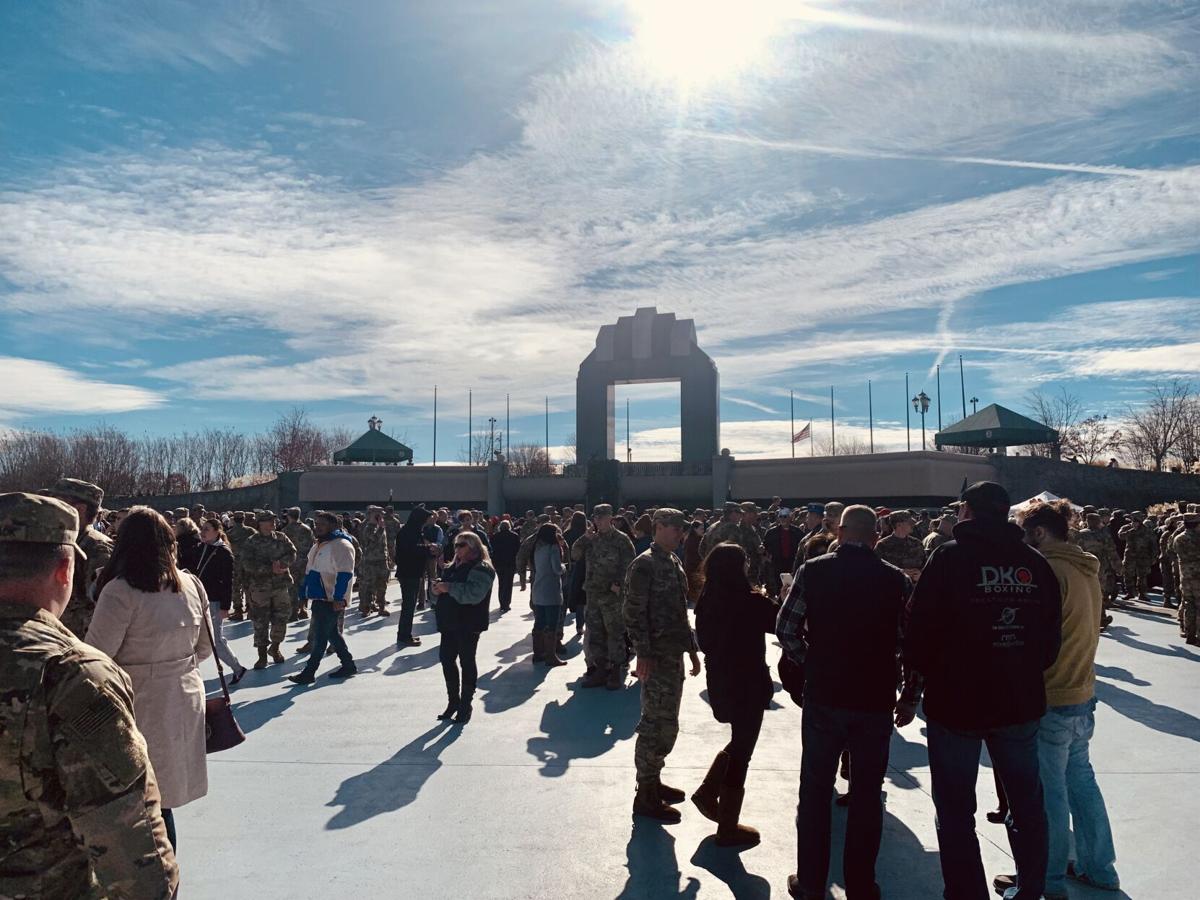 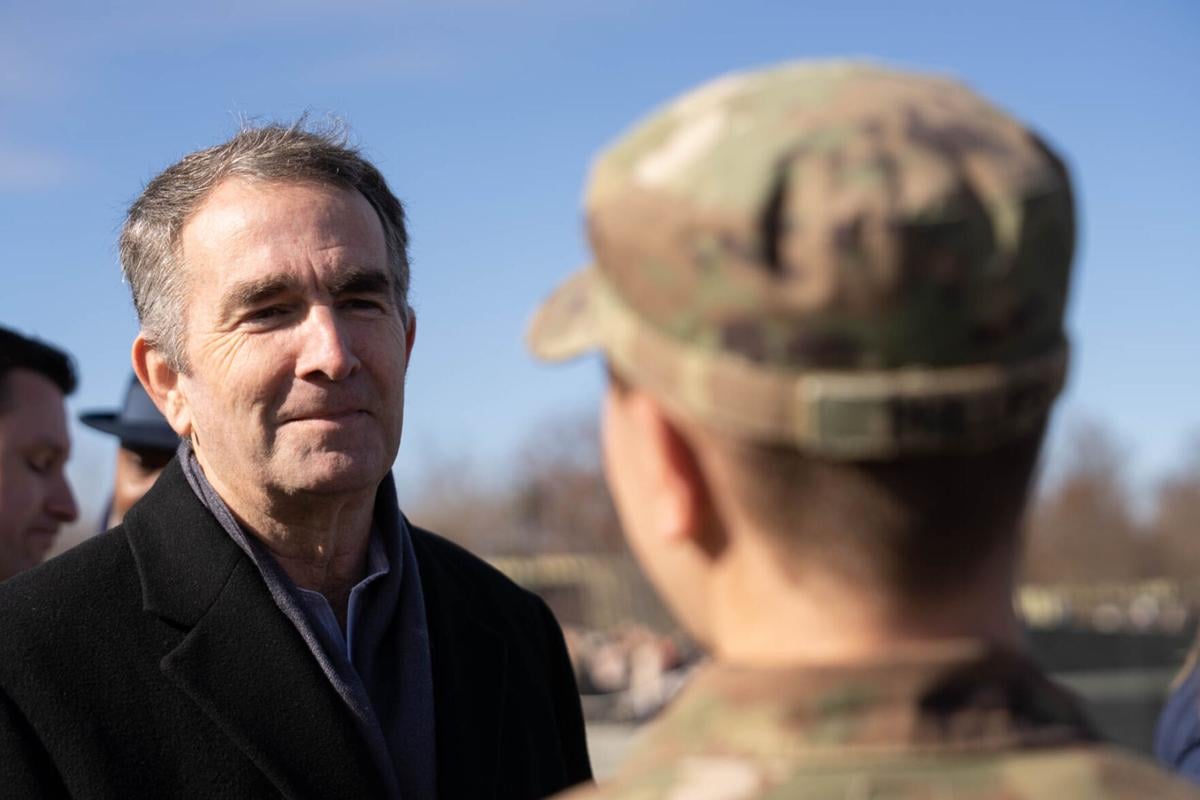 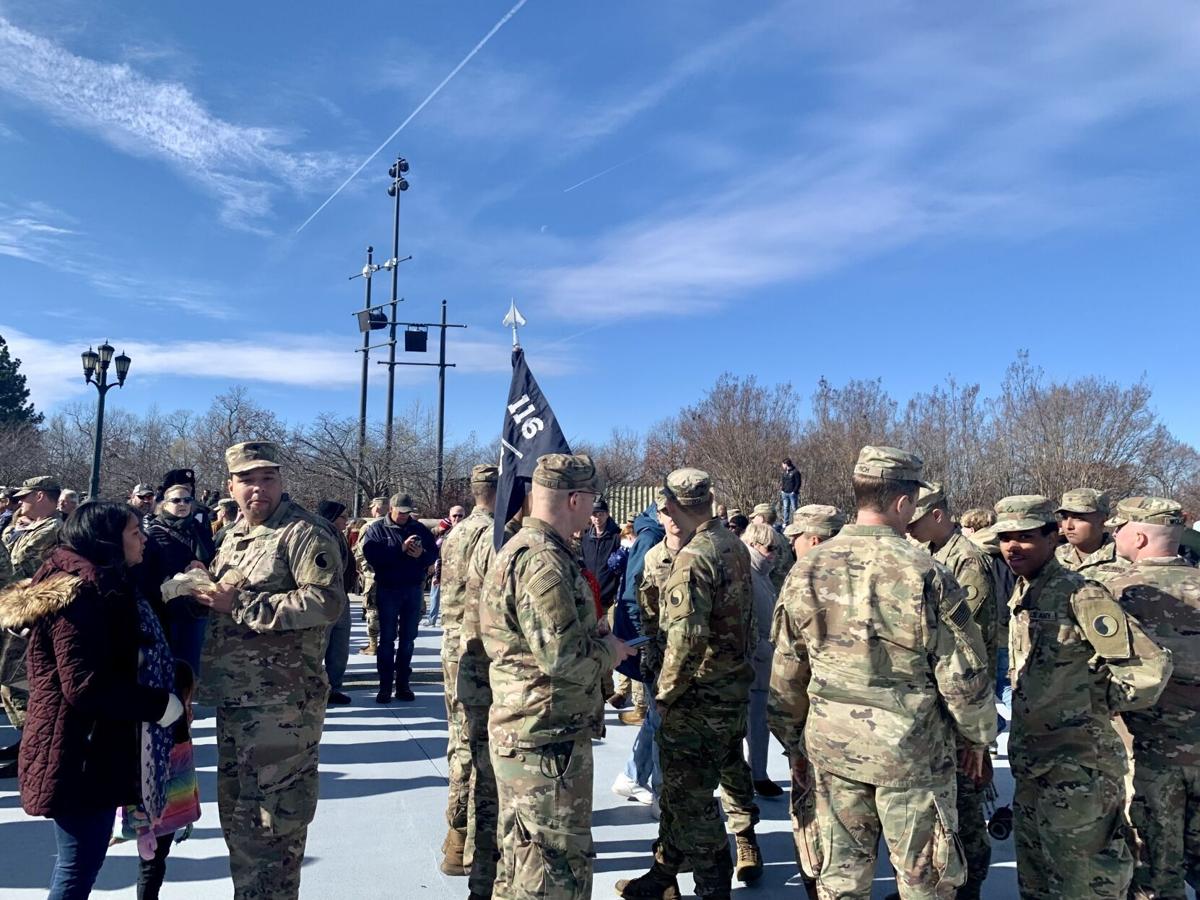 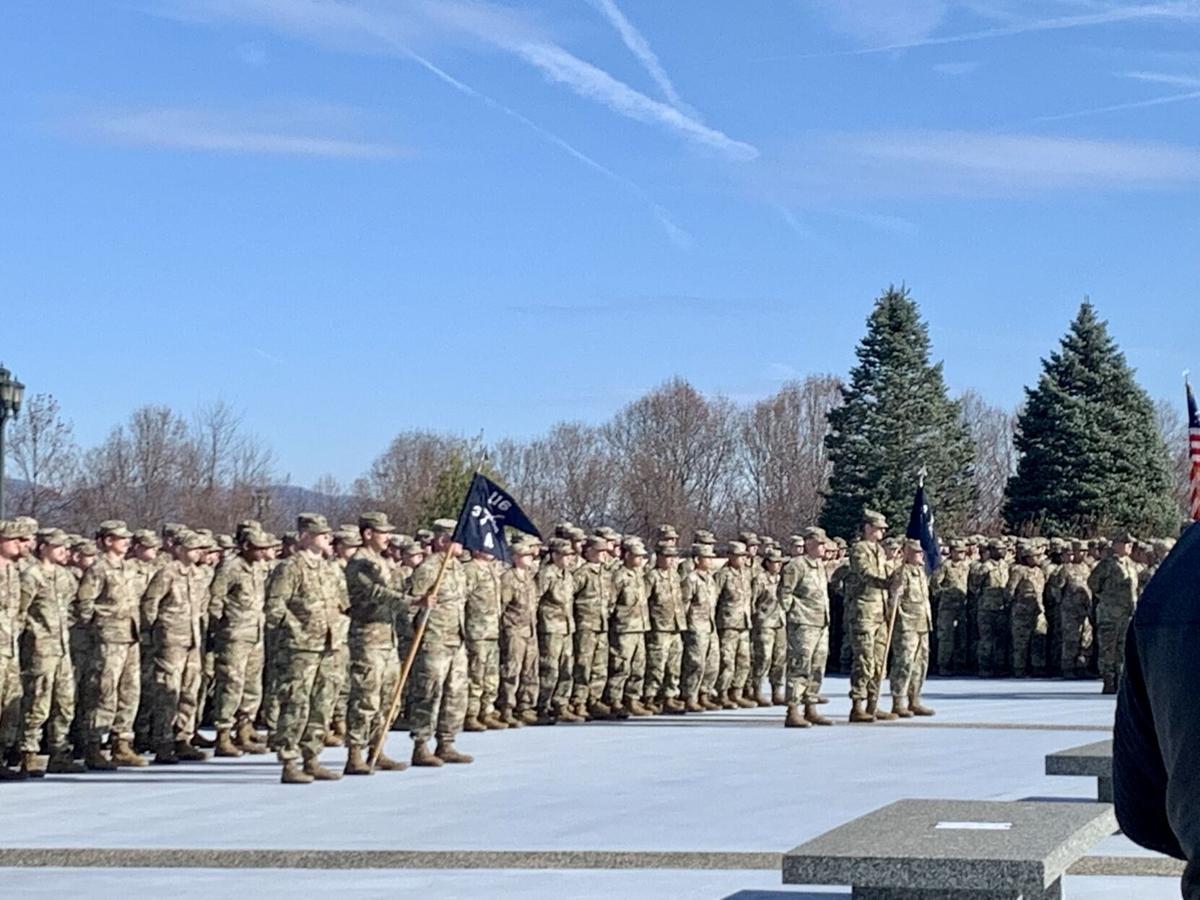 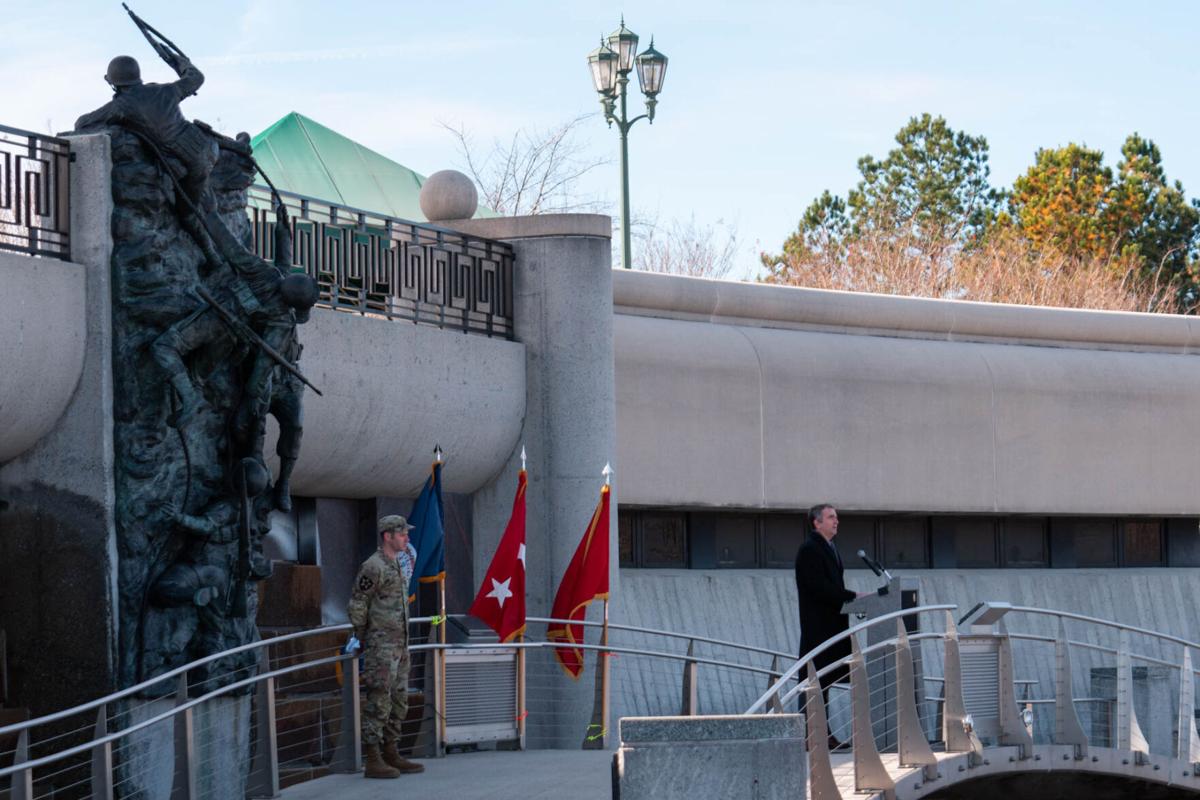 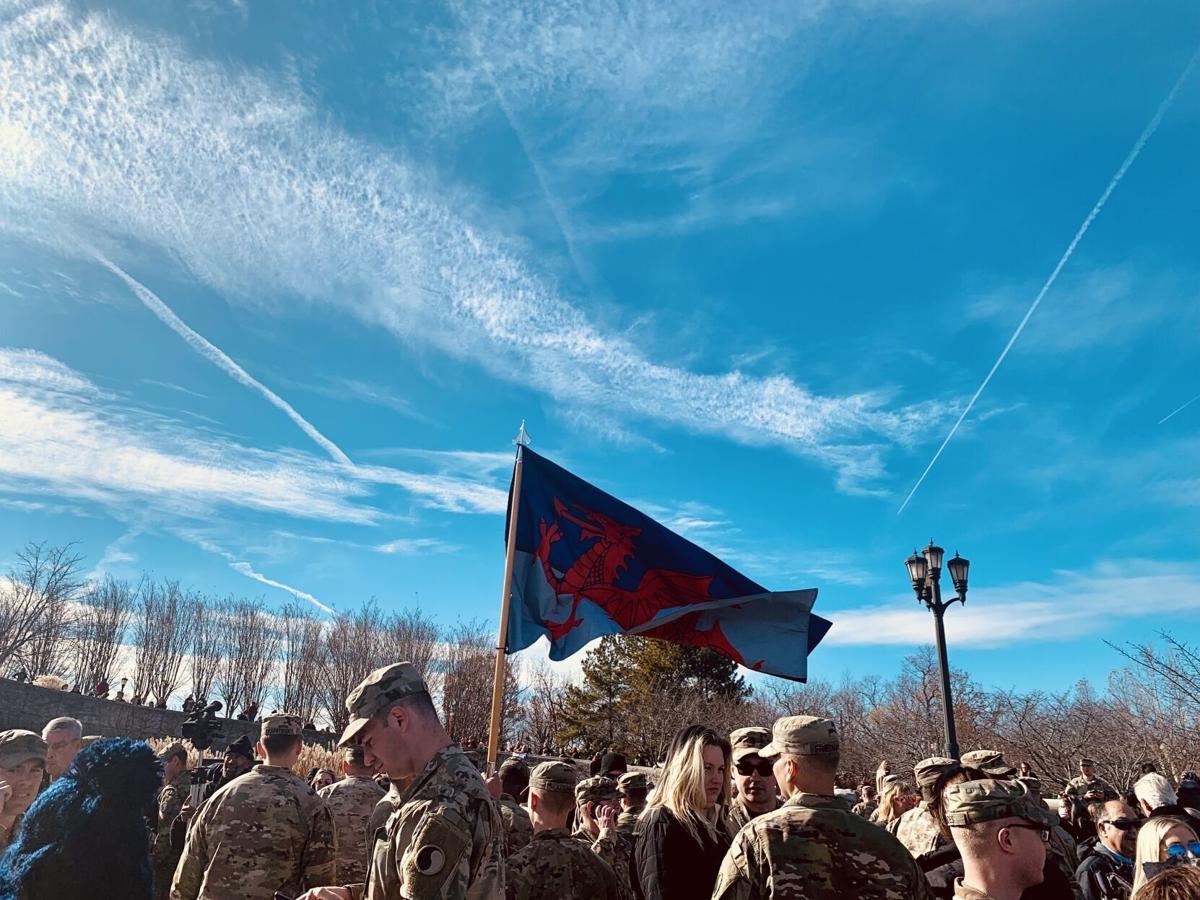 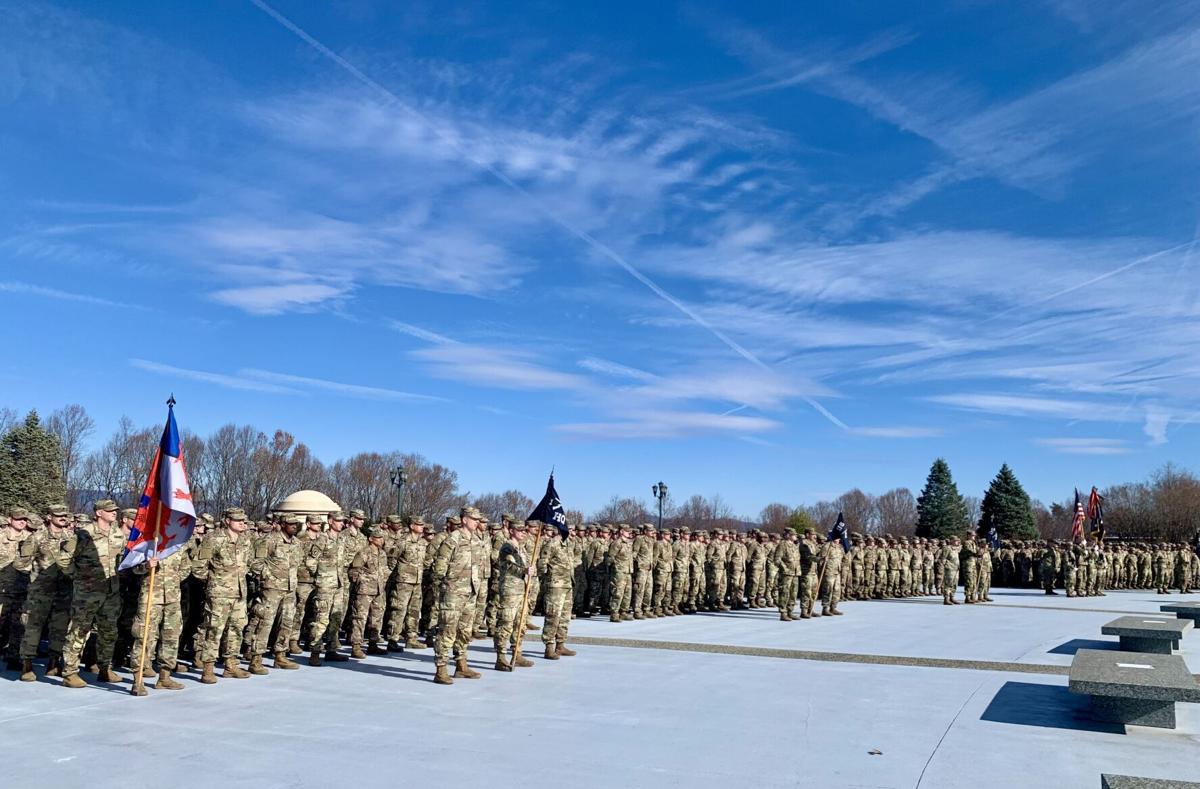 Troops will be deployed to Africa to provide a security force for the Combined Joint Task Force — Horn of Africa. The battalion will be providing security for bases the Department of Defense maintains will help build partnerships with host nations and improve safety and stability in the region.

According to the office of Gov. Ralph Northam, who was in attendance and spoke at the ceremony, approximately 1,000 Army National Guard Soldiers will mobilize as Task Force Red Dragon under the command of the Lynchburg-based 1st Battalion, 116th Infantry Regiment, 116th Infantry Brigade Combat Team.

Families, friends and fellow soldiers officially sent off troops Saturday at the Bedford ceremony. Soldiers will report to Fort Bliss, Texas, for approximately 30 to 45 days of additional mobilization training before heading overseas.

According to Northam’s office, the troops will join the Virginia National Guard’s Fort Belvoir-based 29th Infantry Division and Virginia Beach-based 329th Regional Support Group already serving on federal active duty in the Middle East, and additional units will mobilize in the coming months.

By January 2022, more than 2,000 Virginia National Guard personnel will be mobilized, the most since the Iraq surge in 2007. It is the most soldiers the division has mobilized since 1942.

The unit is one of the Virginia National Guard’s most deployed battalions in the last 20 years, and it carries on the rich traditions of the 29th Infantry Division’s World War I and World War II service, Northam’s office said.

Northam at the ceremony said he has been proud to serve as the battalion’s commander in chief.

Northam served for 8 years in the U.S. Army. He told the soldiers he has been in their position and remembers getting a 2 a.m. call informing him he was going to Iraq.

“So I understand what you are going through and on behalf of a grateful Virginia and a grateful country, I say 'thank you for your service,'” he said. “So I have just a simple ask of all of you and that is to serve this Commonwealth and serve this country proudly. I know you will. I ask you all to take care of each other. I have been in your shoes and it is so important that you take care of your fellow soldiers.”

Lt. Col. James Tierney, commander of the Lynchburg-based 1st Battalion, 116th Infantry Regiment, said the ceremony is a reminder the troops are a part of something larger.

"We're part of a storied unit that earned its place in history by spearheading the Allied invasion on D-Day as the first wave on Omaha Beach to ultimately secure the blessings of liberty," he said.

He said the same unit helped to support peace in Kosovo and fought in Afghanistan and Iraq and elsewhere in the Middle East to defeat a growing terrorist threat to the United States.

“[This is a] unit that helped local and state authorities respond to the civil unrest in the Commonwealth in the spring of 2020 and supported federal law enforcement in January of this year to secure the United States Capitol, the Supreme Court, the Library of Congress and the 2021 presidential inauguration ceremony," Tierney said. "The sacrifices of the 29th Infantry Division in the 116th Infantry Regiment on Omaha Beach are represented so strongly here at this memorial.”

The battalion is trained and equipped to accomplish a wide range of missions throughout the U.S. Africa Command area of responsibility, Northam’s office said, but its primary objective is to provide security for the various forward operating bases maintained by the Department of Defense to build partnerships with host nations and improve safety and stability in the region.

Approximately 825 soldiers assigned to Task Force 183 deployed to Iraq in 2011, and about 775 troops from the Winchester-based 3rd Battalion, 116th Infantry Regiment deployed to Iraq from September 2007 to April 2008.

April Cheek-Messier, the memorial's president, said over the years society has pulled inspiration from the World War II generation. Now that inspiration comes from the generation of soldiers who stood before her Saturday, she said.

"You represent the very best our country has to give and with immense gratitude, we thank you and we salute your valor, fidelity and the sacrifice that you and your families make daily to make our country and the world a better place," she said. "Our thoughts and prayers are with you as you leave on your mission and we will be waiting for your safe return."

Maj. Gen. Timothy P. Williams, adjutant general of Virginia, said it’s important to recognize the battalion is a great and storied group and belongs to one of the most famous and well-known units in the U.S. Army.

"You're well trained. You are well led and we have every confidence that you will be very successful in your deployment to the African continent," Williams told the troops. "The road to today was a long and oftentimes tough journey. We couldn't be here though if it weren't for two key groups, your employers and most of all your families."

Gov.-elect Glenn Youngkin campaigned on getting rid of the tax.

A Norfolk physician who sued Sentara Healthcare over its ban on administering ivermectin to COVID-19 patients resigned from his position at Eastern Virginia Medical School. Dr. Paul Marik announced his departure Tuesday in a news release from the Front Line COVID-19 Critical Care Alliance, an organization he co-founded with other critical care doctors at the start of the pandemic. Marik ...

Renée Thompson Truehart often posts pictures, videos and memes on TikTok, Facebook and Instagram. So when she came across a toddler wandering in the middle of a dark street in Highland Springs in freezing temperatures, she started recording video from her phone even before she stopped her car to help the child.

Gov.-elect Glenn Youngkin's pick for secretary of transportation says the department is "laser focused" on preparation for this weekend's snow, coming days after the overnight standstill on Interstate 95.

Gov.-elect Glenn Youngkin on Tuesday created an advisory group to help guide the state's response to COVID-19 amid a record surge in cases and hospitalizations fueled by the omicron variant.

The hospital's services could be expanded to substance abuse treatment and its facilities should be improved, the Roanoke state legislator said.

In one of this last duties, Virginia Attorney General Mark Herring presented two Black legislators on Thursday with an official opinion overruling nearly 60 racist and discriminatory opinions from prior state attorneys general.