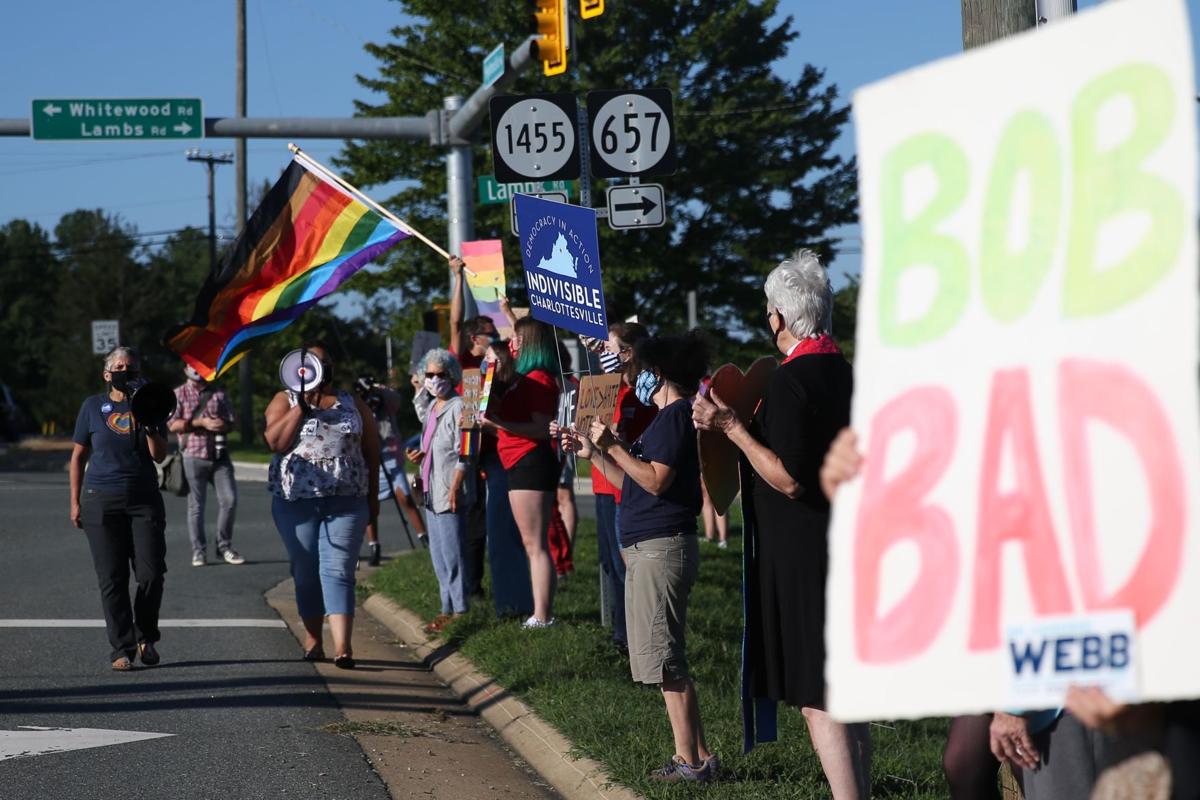 People gather during a peaceful protest of the platform and values of Bob Good, Republican candidate for Virginia’s 5th Congressional District, hosted by Indivisible Charlottesville on Tuesday. 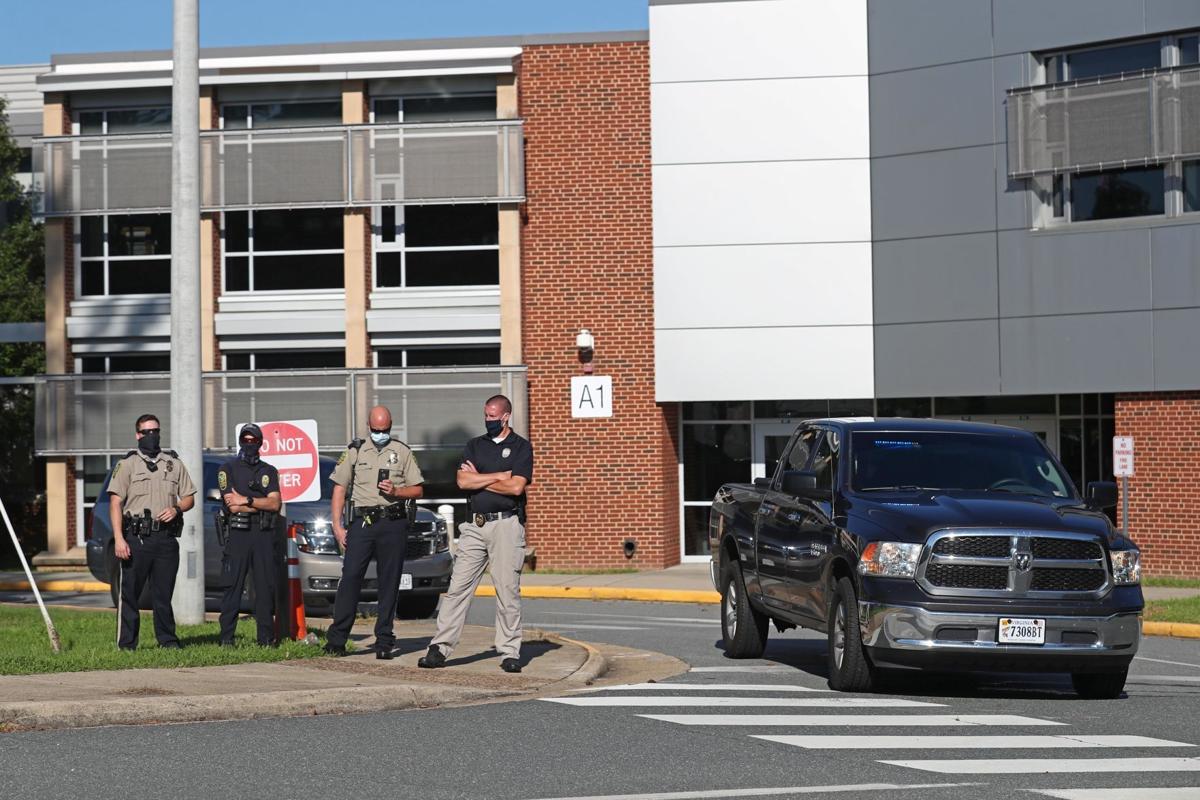 MADISON — Bob Good, the Republican candidate vying for Virginia’s 5th Congressional District seat, held a closed-door meeting with central Virginia pastors in Madison County on Tuesday after canceling a similar event in Charlottesville the day before.

Billed as “Pastor Summits,” by Good’s campaign, the self-described “Biblical conservative” candidate initially scheduled six events over the course of three days this week across the sprawling central Virginia district, which includes Franklin County and part of Bedford County.

The first event had been scheduled for Tuesday morning in Charlottesville but, according to Good, was canceled due to lack of local interest and folded into the Madison County event held later in the day.

Journalists are not allowed into the summits because the events are tailored to pastors and are trying to stress “the importance of this election,” Good said.

“We’re trying to inform pastors on the importance of the election, on the importance of making sure folks are registered to vote and to participate and to make sure they understand the freedoms that we do have in this country as it relates to religious expression and our constitutional rights to support candidates,” Good said.

An Eventbrite page for the Charlottesville event said that Good was holding the meeting to inform churches about new laws passed by the state legislature that would impact churches.

“Bob Good, candidate for Congress in the Fifth Congressional District, is concerned about the impact these new laws will have on places of worship, Christian daycare centers, church employment practices and the preaching of God’s word,” the now password-locked event page read.

Listed topics included: what churches can do to protect themselves from lawsuits; where the next attack on religious liberty will originate; when to make the decision to protect your church; why documenting church policy is so important, including what the Bible says about specific issues; and how to support godly candidates during and after the campaign season.

Tuesday morning, protesters associated with Indivisible Charlottesville gathered outside Connect Church where Good had been set to appear.

A news release from Indivisible Charlottesville said that the protest was prompted by Good’s belief that “laws preventing discrimination on the basis of gender or sexual orientation are a violation of his own religious freedom.”

When asked his stance on the Virginia Values Act, a recently passed law that extends protections against housing and employment discrimination to LGBTQ individuals, Good stressed his belief in religious freedom.

When asked specifically whether he supported the portion of the law that relates to anti-discrimination protections for LGBTQ individuals, Good said he was guided by Christian scripture to love all people but was concerned about the impact the law could have on religious organizations.

Good later said he believes those who drafted the U.S. Constitution were men of faith guided by Judeo-Christian values and “divine inspiration to provide the protections that allow folks to peacefully protest.”

“The violence that we see on display in our cities and the Marxism that they’re celebrating around the world would not permit them to protest the way they are protesting here in our country,” he said.

As first reported by The New York Times, an invitation to the summits attributed to Travis Witt, a former state Tea Party official, included inflammatory and offensive language directed at transgender individuals. Good said the invitation was not sent by his campaign and he had not seen the language prior to the Times story.

During the lead-up to the 5th District Republican convention in June, Good attracted attention for comments he made arguing that his then-opponent, Rep. Denver Riggleman, should not have officiated a same-sex marriage.

Good said this was only one of the reasons he decided to run , accused the media of portraying him as a single-issue candidate and said he does not sense a division among 5th District Republicans.

“When I declared my reasons for running and as I spoke throughout the campaign, we contrasted my views on my previous opponent’s voting record in Congress and our difference in positions,” he said. “The media chose to try to conveniently make it about one issue.”

“I strongly oppose any effort to weaponize faith to marginalize, denigrate, or oppress any American,” Webb wrote. “The discriminatory and hateful rhetoric Mr. Good is employing in his effort to rally support for his candidacy not only reflects poorly on him and his campaign, but also on our Christian faith.”

Del. Jay Jones, D-Norfolk, charged in a Democratic primary debate Saturday night that Attorney General Mark Herring only apologized to the Virginia Legislative Black Caucus for having worn blackface as a teenager in order to salvage his political future.

McAuliffe is riding a comfortable lead ahead of the primary. His key challengers are betting on undecided voters to turn the tide.

Former Gov. Terry McAuliffe appears to have the clearest path to victory as Democrats head into their gubernatorial primary June 8. But Sen. Jennifer McClellan and former Del. Jennifer Carroll Foy are fighting for an upset, betting on voters who tend to sit out off-year primary elections.

People gather during a peaceful protest of the platform and values of Bob Good, Republican candidate for Virginia’s 5th Congressional District, hosted by Indivisible Charlottesville on Tuesday.