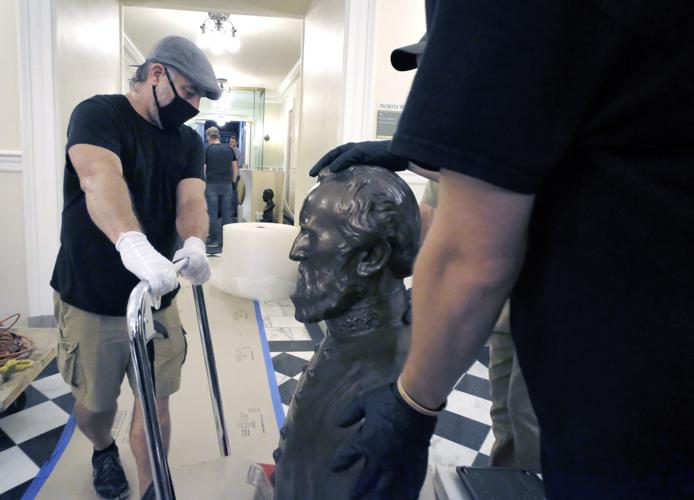 Workmen haul away a bust of Thomas "Stonewall" Jackson from the Old House Chamber inside the Virginia State Capitol in Richmond on Thursday. 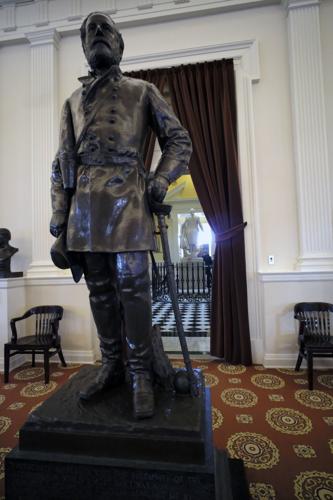 The statue of Confederat Gen. Robert E. Lee stood on the spot where he took control of the Confederate Army inside the old Virginia House of Delegates chamber at the State Capitol in Richmond.

The statue of Robert E. Lee and busts of others who fought for or governed the Confederacy were quietly removed from the Virginia State Capitol Thursday night and early Friday morning at the direction of House Speaker Eileen Filler-Corn.

Filler-Corn, D-Fairfax, ordered the Lee statue and other sculptures be taken from the Old House Chamber, saying, "Virginia has a story to tell that extends far beyond glorifying the Confederacy and its participants."

"The Confederacy's primary objective in the Civil War was to preserve an ideology that maintained the enslavement of human beings,” Filler-Corn said in a statement Friday morning. “Now is the time to provide context to our Capitol to truly tell the Commonwealth's whole history."

Filler-Corn had authority by the Virginia Constitution and the rules of the House of Delegates to remove the statues, according to her office.

The removal of the statues began Thursday evening and ended about 4:30 a.m. A professional conservator supervised the removal. The statues from the Capitol building were all taken to a storage location.

“Those who fear the scrutiny of their judgment and challenges to their authority execute consequential decisions in the dead of night," Senate Republican leaders, including Mark Obenshain of Rockingham, Bill Stanley of Franklin, and Steve Newman of Lynchburg, said in a statement. “Speaker Filler-Corn’s unilateral decision to remove multiple historic artifacts and sculptures from Virginia’s Capitol, eschewing any opportunity for public input and usurping the Capitol Square Preservation Council, is emblematic of the arrogant and unaccountable stewardship of the General Assembly we have seen emerge under the Democrat majority."

The other items were positioned around the room. The busts removed honored Jefferson Davis, the Confederate president; Gens. Thomas "Stonewall" Jackson, Joseph Johnston, J.E.B. Stuart, and Fitzhugh Lee, who was Robert E. Lee's nephew and served as a Virginia governor; Navy officer and oceanographer Matthew Fontaine Maury; and Alexander Stephens, former vice president of the Confederacy. A plaque recognized Thomas Bocock, former speaker of the Confederate States House of Representatives.

The Lee statue stood at the entrance to the Old House Chamber, which mainly serves as a museum to visitors. Virginia delegates voted there to secede from the Union in 1861. The bronze Lee statue was situated where Lee accepted command of the armed forces of Virginia from Gov. John Letche. The Confederate Congress met in the building during the Civil War.

"Generations of Virginians, Americans and visitors from around the world have been greeted by these imposing symbols of treason and white supremacy for far too long," said Del. Lamont Bagby, D-Henrico, chairman of the Virginia Legislative Black Caucus.

Most of the statues removed were put up decades after the Civil War, during the era of Jim Crow segregation, as part of an effort to glorify the cause of the Civil War as being about states' rights rather than the expansion of slavery.

The Lee statue was approved in 1928 with the help of then-Gov. Harry F. Byrd, later the architect of Massive Resistance, a set of policies that aggressively pushed back against racial integration of public schools following the U.S. Supreme Court ruling in Brown v. Board of Education.

House Minority Leader Todd Gilbert, R-Shenandoah, called the decision to remove the Lee statue "perplexing, given the fact that that the Lee statute in the old House chamber literally marks the spot where Lee accepted his general’s commission, setting off some of the most historic and tragic events in our nation’s history."

"Unlike the Lee monument on Monument Avenue, this statue is a historical marker," Gilbert said, referring to the towering monument in Richmond that Gov. Ralph Northam is trying to have removed.

Filler-Corn has asked Del. Delores McQuinn, D-Richmond, to chair a newly formed advisory group to the speaker to examine items under House control and to advise the speaker on any possible future actions related to historical artifacts.

The advisory group will be made up of a bipartisan group of House members, historians and community leaders from across Virginia. It will advise Filler-Corn of whether there are other actions to take on House-controlled artifacts in the Capitol, putting up additional historic artifacts and historic context in the House-controlled areas of the Capitol and what will be done with the removed Lee statue and Confederate busts.

“The artifacts at the Capitol are a painful reminder of the deep-rooted wounds of slavery and 401 years of oppression. These Confederate artifacts are constant reminders of individuals who had no intentions of guaranteeing justice, equality and equity for all,” McQuinn said in a statement. “I am proud of Speaker Filler-Corn for taking this action to not only remove these hateful symbols, but also create a process to make sure our State Capitol reflect our ideals."

Gilbert said the Capitol building served as the Confederate Capitol, "a fact that should no doubt force the speaker’s new advisory group to recommend that it be razed to the ground."

Northam's spokeswoman said the governor is focused now on removing the Lee statue on Monument Avenue before turning his attention to working with the "General Assembly on next steps for the Capitol Grounds."

Outside the Capitol on the grounds are statues of Byrd, Stonewall Jackson and William Smith, a former governor and Confederate brigadier general. The Byrd statue drew attention earlier this year when Del. Wendell Walker, R-Lynchburg, filed a bill as part of a stunt to challenge Northam to remove that statue if he wanted other statues taken down.

Democrats liked the idea, but found the manner in which Walker proposed it to be insulting, so they didn't take up the bill. Del. Jay Jones, D-Norfolk, has said he plans to file a bill during next year's regular General Assembly session to have the statue brought down.

The removal of the statues comes as localities are considering the removal of Confederate monuments in public places as part of the commonwealth's reckoning with Confederate symbols. New Democratic majorities in the House of Delegates and Senate this year authorized local governments to remove monuments memorializing the Confederacy.

People protesting racial injustices and police brutality in recent months have focused attention on Confederate monuments and other figures who supported racist policies by spray-painting and toppling them. The monument to Robert E. Lee in downtown Roanoke got knocked down Wednesday night, just a couple weeks after the Roanoke City Council took the first step toward having it lawfully removed.

Later Thursday, the Commission for Historical Statues in the United States Capitol set in motion the process to remove the statue of Robert E. Lee from Statutory Hall. The newly formed commission will recommend to the General Assembly which person should be replace Lee and what to do with the Lee statue, which now resides in the crypt of the nation's Capitol.

“It never represented every Virginian, nor did it tell the full and true story of Virginia," Northam told the commission. "We can do better, and we need to do better.”

The commission heard public comments from people for and against removing Lee's statue. Sue Anne Boothe, of Floyd, submitted written remarks, urging the commission not to remove the statue of Lee, who she described as "a man of great moral and honorable character."

"I believe that Robert E. Lee is an appropriate representative of Virginia," she wrote. "He was an outstanding man who served the country and Virginia."

The U.S. House of Representatives approved a bill earlier this week to remove the statues of Lee and other Confederate leaders from the U.S. Capitol. The bill directs the Architect of the Capitol to identify and eventually remove from Statuary Hall at least 10 statues honoring Confederate officials, including Jefferson Davis.

All of the Democrats in Virginia's delegation voted in favor of the bill. Reps. Ben Cline, R-Botetourt, and Rob Whittman, R-Westmoreland, voted against it. Reps. Morgan Griffith, R-Salem, and Denver Riggleman, R-Nelson, did not cast votes.

“Instead of working to enact bipartisan police reform following the tragic killing of George Floyd, Speaker Pelosi seems to be more focused on the statues in the U.S. Capitol,” Cline said. “So long as the Capitol statue selection process is made by each individual state, the decision to remove Robert E. Lee from the Capitol Complex should remain Virginia’s to make — not Congress’ and not Nancy Pelosi’s.”

The bill has been sent over to the Republican-controlled Senate, where its prospects are uncertain.

Each state has two statues in Statutory Hall, and Virginia's other contribution is George Washington.

The entire process for the commission to remove and replace the Lee statue is expected to take a couple years.

“These statues are divisive, they glorify a racist and painful time in our history, and it is past time we stop honoring the confederacy," Northam said.

U.S. Rep. A. Donald McEachin, D-4th, died Monday night, weeks after winning a fourth term representing the district, which includes the city of Richmond and parts of Henrico and Chesterfield counties.

» Reaction to the death of McEachin

The Roanoke delegate will file a bill to be considered during next year's General Assembly session.

The tragedy in Chesapeake hangs over the traditional tax tribute ceremony.

Inflation slows public projects, from buses to bridges and buildings

ABINGDON — The Washington County Board of Supervisors voted 5-2 in favor of a resolution Tuesday night declaring itself to be a “pro-life county.”

ABINGDON, Va. — Preliminary steps to try and secure funding for a pilot nuclear project are occurring in the run-up to his first biennial budget, Gov. Glenn Youngkin said Thursday.

Workmen haul away a bust of Thomas "Stonewall" Jackson from the Old House Chamber inside the Virginia State Capitol in Richmond on Thursday.

The statue of Confederat Gen. Robert E. Lee stood on the spot where he took control of the Confederate Army inside the old Virginia House of Delegates chamber at the State Capitol in Richmond.