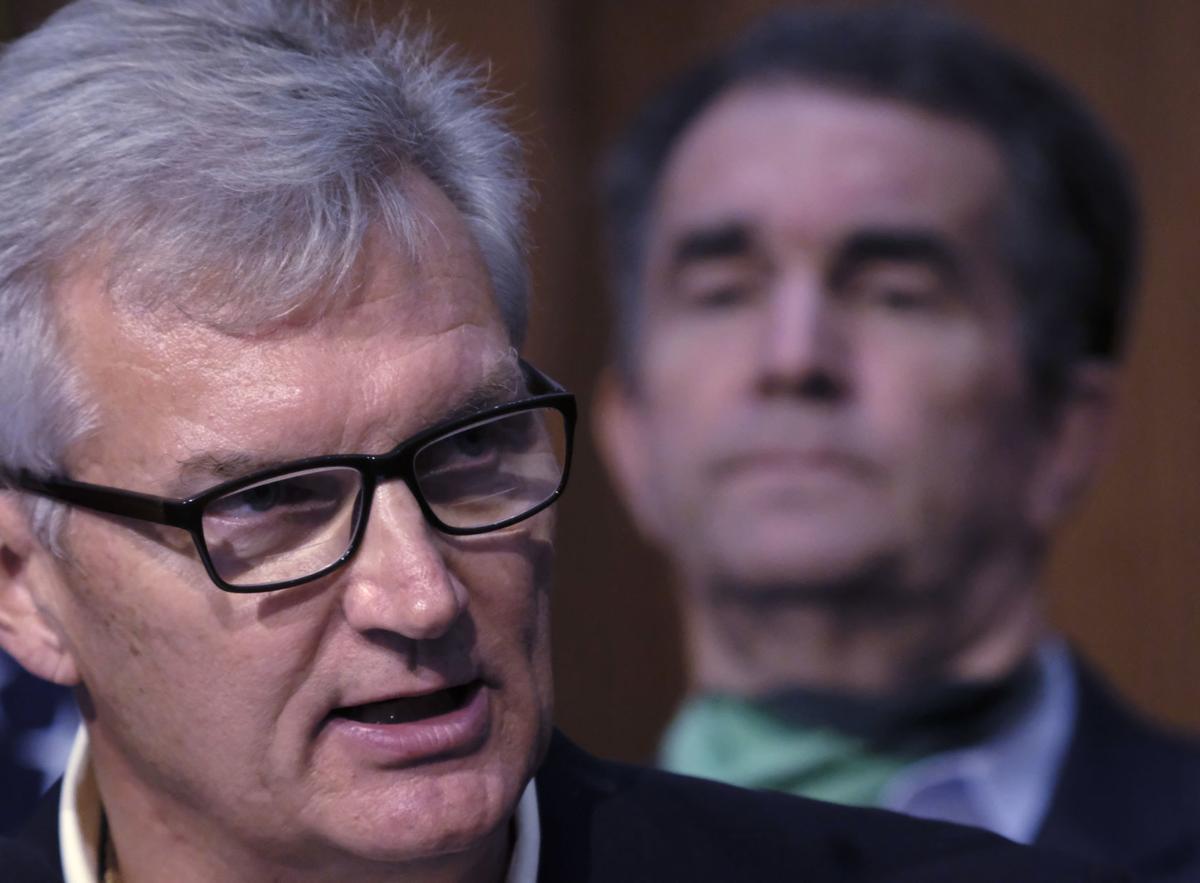 In this May image, Gov. Ralph Northam (right) listened as Virginia Secretary of Finance Aubrey Layne spoke during Northam’s COVID-19 briefing inside the Patrick Henry Building. 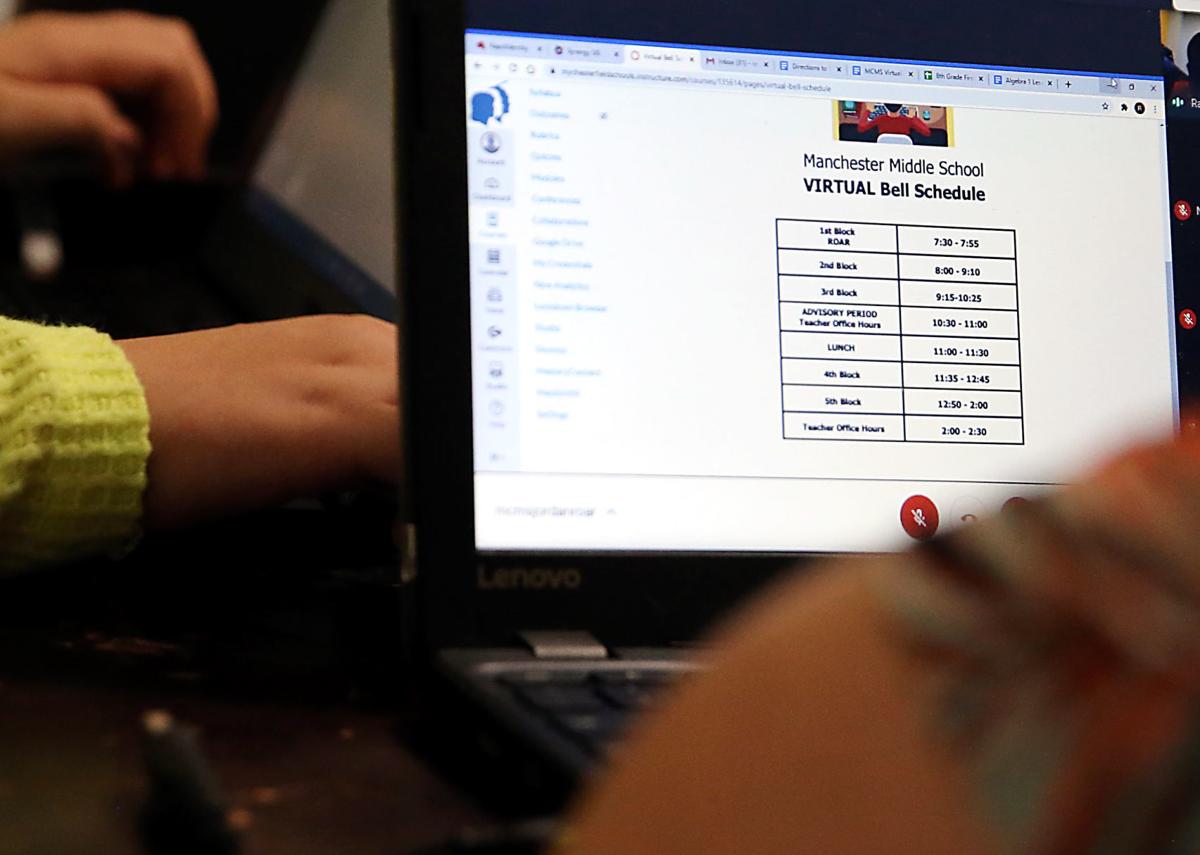 Nearly half of the state’s 132 districts, accounting for 80% of public school students, reopened this year entirely depending on remote instruction.

Gov. Ralph Northam is urgently reviewing a request of $200 million in federal funds to help Virginia public school divisions operate in a school year like no other, after the coronavirus pandemic forced most public schools in Virginia to rely on remote learning.

Secretary of Finance Aubrey Layne told state legislators on Tuesday that the governor’s office received the request from the state Department of Education the previous evening, as the state considers using a big chunk of money it has received under the federal CARES Act to augment other federal emergency relief that has gone directly to the state public education system.

The $200 million represents an expenditure of $160 per pupil to help school divisions with testing to detect and control the spread of COVID-19, as well as money for additional staffing, personal protective equipment, transportation and upgrade of technological systems for delivering instruction remotely. Layne said the U.S. Department of Treasury has released guidance that would allow states to provide up to $500 per pupil to school divisions without the normal documentation required under the CARES Act.

Virginia received $1.8 billion in CARES Act funding for the state, in addition to $1.3 billion that it has distributed to local governments that have, in turn, used a portion of the money to help public schools reopen in a continuing public health emergency. The state must use the money by Dec. 30 and account for it under strict rules in the law, which Congress passed and President Donald Trump signed in late March.

“We don’t intend to give one nickel back,” Layne told the Senate Finance & Appropriations Committee in a briefing on state revenues that are expected to fall $2.7 billion short under the two-year budget the General Assembly approved on March 12, the day the governor declared the public health emergency.

When Senate Majority Leader Dick Saslaw, D-Fairfax, asked whether the revenue outlook has improved, the finance secretary replied, “I don’t think we’re going to see much of a change until there is an actual vaccine” for COVID-19, the disease caused by the coronavirus.

Northam introduced a revised budget last month that would protect existing state programs and avoid layoffs, but would cut more than $2 billion in new spending that the assembly — controlled by Democrats in both chambers for the first time in more than 20 years — adopted six months ago.

The economic uncertainty caused by the ongoing pandemic also has prompted the administration to guard the funding it received under the CARES Act. After distributing money to localities, the state has committed about $562 million, primarily for COVID-19 testing and contact tracing, protective gear, housing relief and grants to small businesses.

With about $1.1 billion remaining, the Northam administration is in the final stage of reviewing a package of $153 million in spending on different forms of testing for the virus, contact tracing of people who test positive, emergency management efforts that include purchase of protective equipment and help for the state’s overcrowded public mental hospitals, which also are battling COVID-19 outbreaks.

Deputy Secretary of Finance Joe Flores said Tuesday that the Department of Planning and Budget is reviewing the package to ensure the spending would comply with federal guidelines that would require the state to repay money that was used improperly.

“Provided that they are [in compliance with the rules], I think it is something that we will move forward with,” Flores said.

Layne told legislators that the administration also is considering other requests for using the money, such as expanding broadband telecommunications that have become essential to work and learning during the pandemic, additional mortgage and rental assistance, and hazard pay for essential workers.

The state also projects a $750 million shortfall in its unemployment insurance trust fund, which he said the federal funding could help abate.

The new request from the Department of Education comes as an urgent priority while local school divisions struggle with challenges they’ve never faced before in instructing students either online or safely in physical school settings.

About half of the state’s 132 school divisions have reopened entirely with remote instruction, but those divisions include about 80% of Virginia’s public school students. Ten school divisions, including Hanover and Prince George counties, have reopened entirely with in-school instruction, and an additional 25 are operating in part with in-person classes. The remaining divisions have adopted hybrid systems.

Virginia has relied on other sources of funding under the CARES Act for its school divisions, including almost $240 million from the Elementary and Secondary School Emergency Relief Fund, known as ESSER, and $43.4 million from the Governor’s Emergency Education Relief Fund, or GEER, which also has provided more than $23 million for higher education institutions.

“The [state] CARES Act money is only a small part of the money going to public education,” Layne said in an interview.

Former Gov. L. Douglas Wilder said Thursday that protesters and other Virginians must demand more of their leaders in order to redress systemic inequities in education, health care and housing.

Representatives of the largest law enforcement organizations in Virginia on Thursday vented over some of the legislation pending in the Virginia General Assembly and the current state of their profession's public image.

Richmond’s top prosecutor has asked the Richmond Circuit Court to appoint a special prosecutor to determine whether Mayor Levar Stoney broke any laws while arranging the removal of Confederate statues from Monument Avenue this summer.

The Shenandoah Battlefields Foundation will take possession of Albemarle County's Confederate soldier statue after its Saturday removal from Court Square.

The Richmond City Council has voted unanimously to adopt a gun ban on public property during protests and other events.

Senator Mark Warner stopped by the rooftop of The Virginian Hotel in downtown Lynchburg to hear community concerns from local leaders, and discuss the ongoing COVID-19 public health crisis.

In this May image, Gov. Ralph Northam (right) listened as Virginia Secretary of Finance Aubrey Layne spoke during Northam’s COVID-19 briefing inside the Patrick Henry Building.

Nearly half of the state’s 132 districts, accounting for 80% of public school students, reopened this year entirely depending on remote instruction.