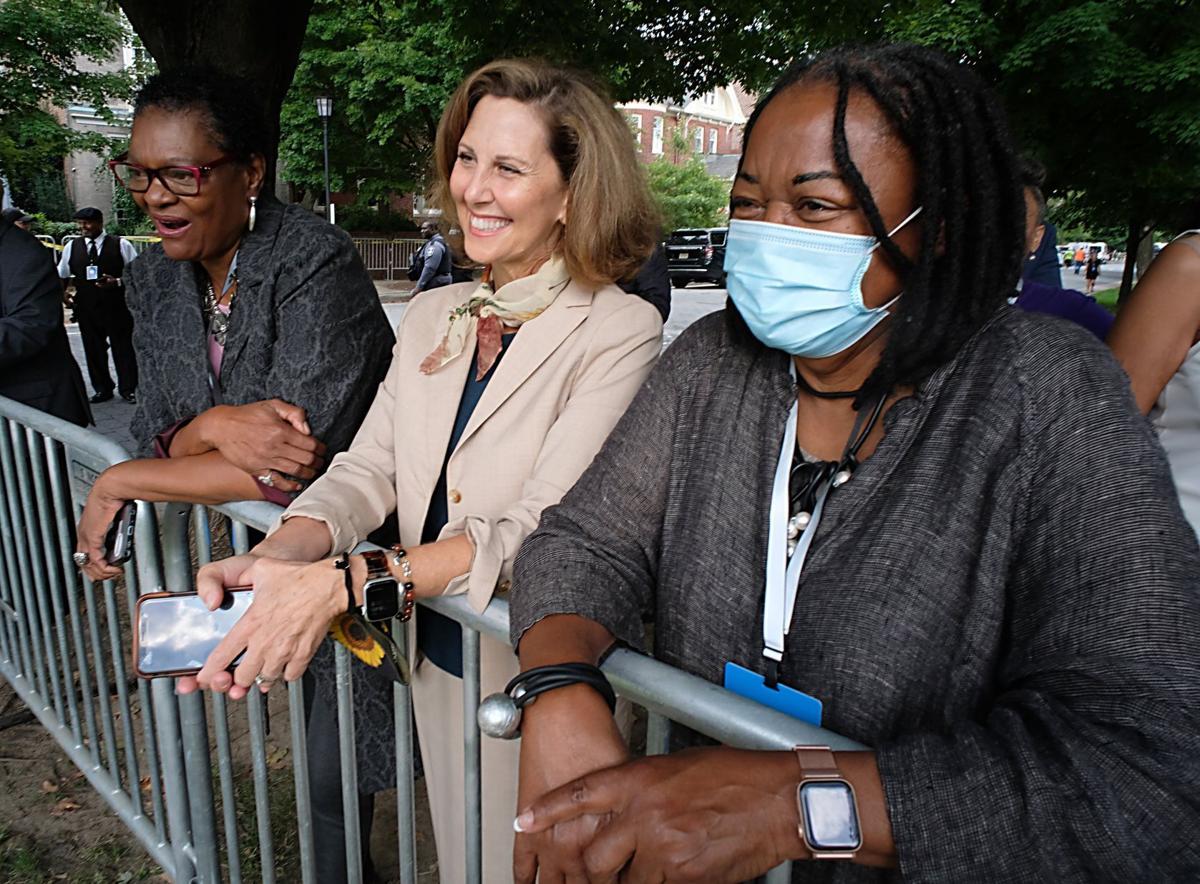 Watching as the statue of Confederate Gen. Robert E. Lee is removed in Richmond on Sept. 8 are, from left, Del. Delores McQuinn, D-Richmond, Virginia First Lady Pam Northam and state Senator Mamie Locke, D-Hampton. Locke, a member of the redistricting commission, said, “I cannot see myself moving forward with these maps,” calling them a step backward for minority representation. 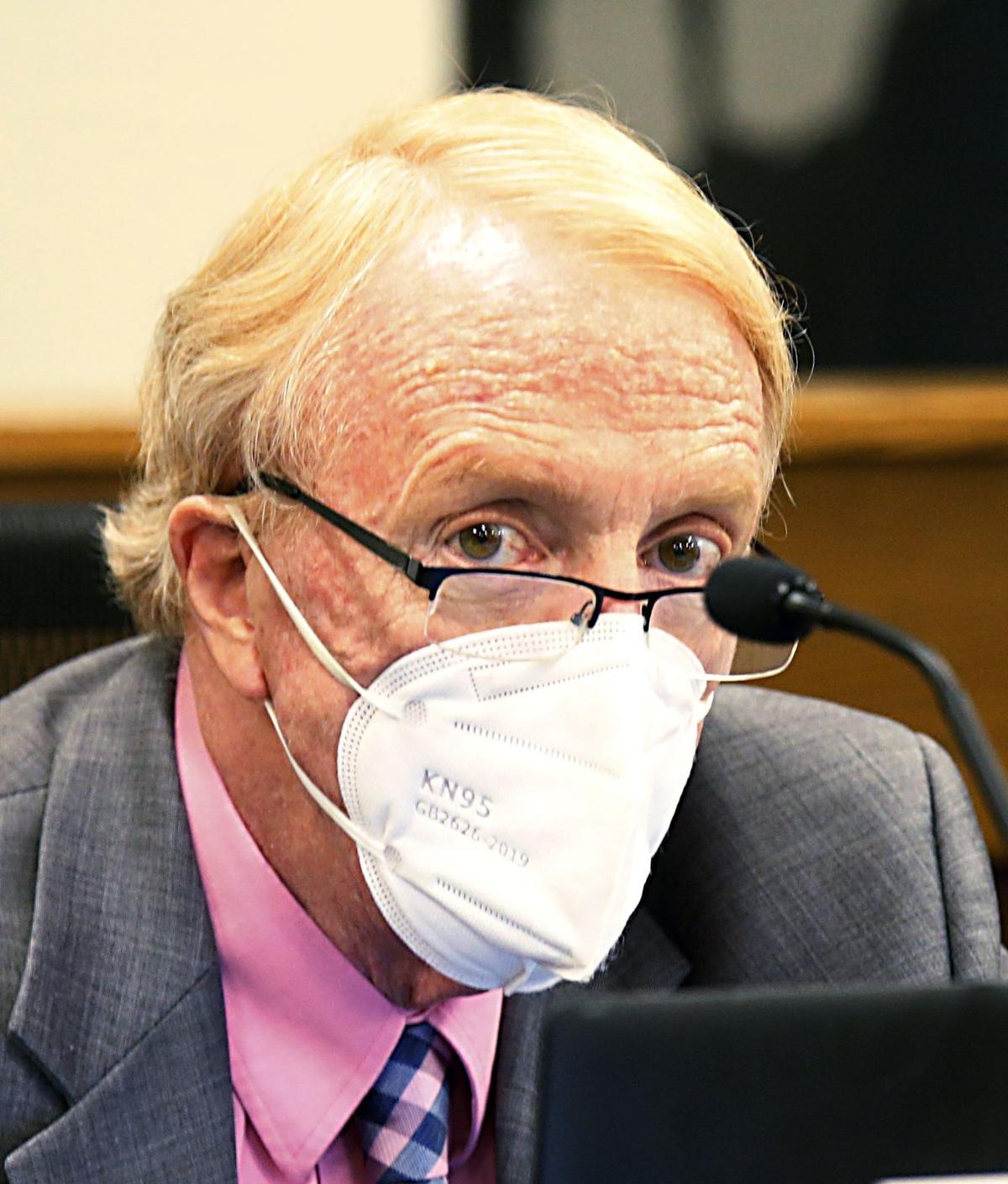 Sen. George Barker, D-Fairfax, listens to comments during a meeting of the redistricting commission Monday inside the Pocahontas Building in Richmond.

Virginia’s redistricting commission on Monday got its first pass at a set of proposed maps for the state’s legislative districts — maps that partisan teams created separately and that are far from the finished product.

These maps will lay the foundation for the commission’s final product, which is due to the General Assembly in less than 20 days. (Legislators can vote up or down on the final proposed maps, but may not amend them.)

A key piece of data missing from these maps is political voting trends from general and primary elections — data that will serve as the basis for political haggling between Republicans and Democrats on the 16-member commission of eight citizen members and eight lawmakers.

More importantly, the data will inform the civil rights protections for racial minorities the commission will need to bake into the maps to comply with federal law, which is intended to protect the political power of groups historically disadvantaged by this process.

Here are five key takeaways from the commission’s progress so far:

Minority voting powerThe commission failed to agree last week on the instructions it would give map-makers on building legislative districts that ensure historically disadvantaged voters of color could elect candidates of their choice.

That left the commission with initial maps from both Republicans and Democrats that in some cases included fewer districts than currently exist in which voters of color form the majority or make up a substantial voting bloc. Both Republican and Democratic counsels emphasized that data on racial polarization and voting trends that hasn’t yet been taken into account would likely impact this aspect of the maps.

Still, the issue has been a source of tension among observers and lawmakers. It was members of the Virginia Legislative Black Caucus in the House who warned that the constitutional amendment on redistricting — which the state’s voters approved last year, setting up a commission — didn’t include enough protections for voters of color.

On Monday, one of the commissioners, a senator who is a member of the Black caucus, said she was concerned the maps as presented were essentially a step backward for minority representation — even an illegal one — that could derail the process.

“I have a serious problem with retrogression, if I keep hearing about retrogression — a reduction in the number of minority districts — I cannot see myself moving forward with these maps,” said Sen. Mamie Locke, D-Hampton.

Two partisan maps must become one

Had voters not approved the constitutional amendment to create the commission, Virginia Democrats who hold majorities in the House and Senate would have had wide-ranging power to come up with the state’s new maps, checked by promises from lawmakers and Gov. Ralph Northam to not gerrymander.

With the bipartisan commission in place, representatives from both parties will have to come together.

That process had barely begun when the commission was presented with two maps from two partisan map-drawers on Monday. The maps were created without considering political data, which will be added later. The result was maps by partisan consultants that don’t appear to obviously disadvantage one party over another, according to an analysis by the Virginia Public Access Project.

“We didn’t get two gerrymandered maps, one from the Republicans and one from the Democrats. It looks like we were handed two sets of fairly good starting maps, and that’s because of the commission’s guidance,” said Liz White, the executive director of the anti-gerrymandering group OneVirginia2021.

White acknowledged that heated political debate will likely come later, but, she added, “I think we’ll be in a different, better position than if they had started off with the political considerations.”

The messy part of the process — merging the maps and calibrating them politically — is up ahead. On Monday, there wasn’t a clear plan for that.

Commission co-chair Greta Harris urged other members of the commission multiple times on Monday to come forward with ideas for how to reconcile the two maps. For now, that call only solidified into an instruction that both teams work to find districts that they could agree on. Attorneys from both parties emphasized that aligning even districts that look visually similar could prove contentious.

At one point, Harris suggested by the end of this week or next, the map-drawing teams from both parties “start working together to produce a third map” for both the House and the Senate.

Positive feedback for the maps echoed by members and the public on Monday praised the fact that proposed districts are more compact than the existing districts — fewer localities are broken up into different legislative districts. Divisions, where they happen, tend to follow organic lines like highways or bodies of water.

Both of the commission’s chairs, Harris and Mackenzie Babichenko, and several other members, expressed support for tinkering with the size of the districts within the allowed margin in order to keep even more localities and communities whole within legislative districts.

The commission will have to decide whether and how to protect incumbents.

Because of the panel’s decision to draw the state’s political maps from scratch, and to do so without taking into account where current lawmakers live, the proposals from both the Democrat and Republican lawmakers include districts that include two or even three incumbents.

The GOP Senate map could create a race between Sen. Amanda Chase, R-Chesterfield and Sen. Ghazala Hashmi, D-Chesterfield. The Democratic map could pit Sens. Jennifer McClellan, D-Richmond and Joe Morrissey, D-Richmond against one another in a primary.

Scenes like these play out across both proposed House and Senate maps, pitting incumbents from the same party or from different parties against one another — and leaving some districts with no incumbents and up for grabs.

Lawmakers can move, retire or run for a different elected office — and some commission members have signaled they will only go so far to protect incumbents. Others have noted that ensuring both parties face the same level of incumbent losses is an important part of keeping the process fair. The commission plans to tackle this issue closer to its Oct. 10 deadline in a few weeks.

The public can directly comment on the proposed maps through a tool on the commission’s webpage, and a new consulting firm the commission hired will set up a separate form to field and analyze public comments.

The commission, as required, will also hold another round of public hearings from Oct. 4 through Oct. 7, with virtual hearings occurring twice a day in that time frame.

Boyles is the fifth interim or full-time city manager the city has had since 2018, and the third since September 2020.

The Virginia Redistricting Commission on Monday had preliminary discussions about how to draw the state's congressional districts, setting aside its contentious work on the state's legislative districts.

The Virginia Redistricting Commission will not finish its work on the state’s legislative maps, and will instead move on to drawing maps for the state’s congressional districts.

Henrico and Chesterfield counties are shaping up as key areas of debate as Virginia's redistricting commission takes its first crack at redrawing the state's congressional districts ahead of an Oct. 25 deadline.

'I think our work here is done.' Virginia's redistricting commission staring at failure

Virginia's redistricting commission was tasked with drawing the state's political districts in what was pitched as an effort to end gerrymandering.

Federal legislation that would expand the consumer market for hemp and CBD products is expected to have widespread support once it moves forward in Congress, U.S. Rep. Morgan Griffith said Tuesday.

Many maps, no compass: Redistricting panel seeks its path

In their second and final debate Tuesday, Democrat Terry McAuliffe and Republican Glenn Youngkin offered competing visions for how to bring th…

Watching as the statue of Confederate Gen. Robert E. Lee is removed in Richmond on Sept. 8 are, from left, Del. Delores McQuinn, D-Richmond, Virginia First Lady Pam Northam and state Senator Mamie Locke, D-Hampton. Locke, a member of the redistricting commission, said, “I cannot see myself moving forward with these maps,” calling them a step backward for minority representation.

Sen. George Barker, D-Fairfax, listens to comments during a meeting of the redistricting commission Monday inside the Pocahontas Building in Richmond.