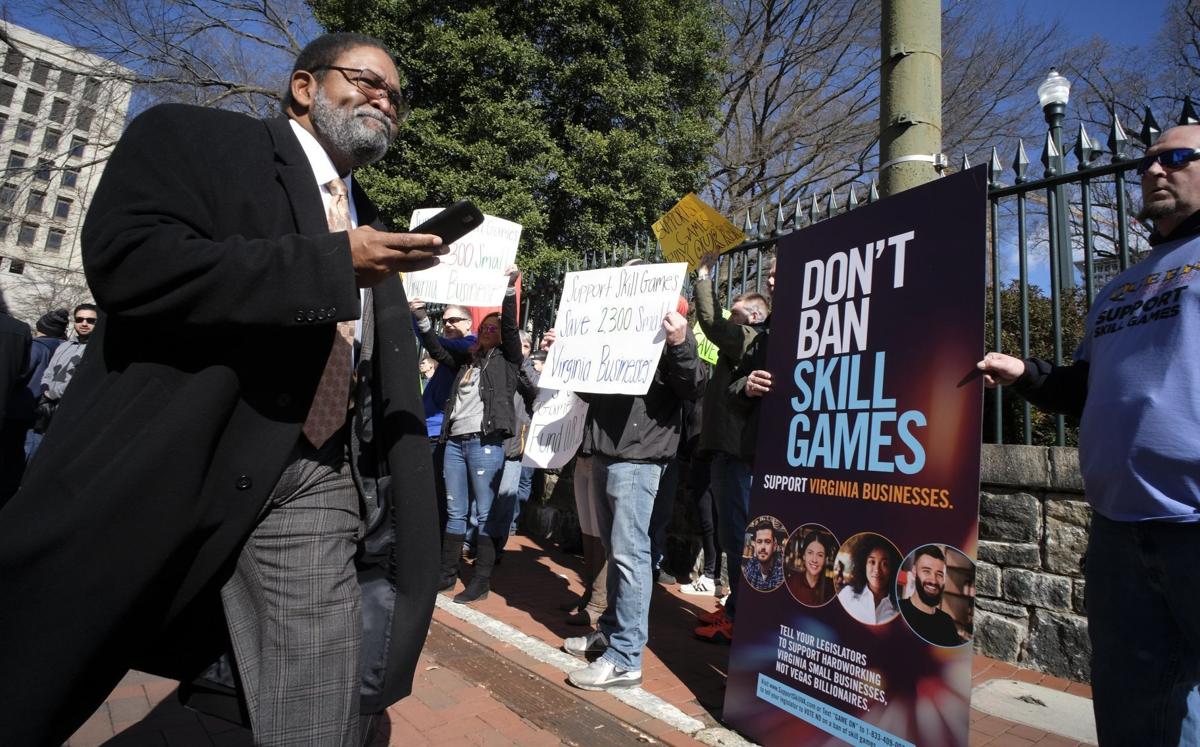 In February 2020, Del. Joe Lindsey, D-Norfolk, walked past opponents of a proposed ban on electronic skill games, who made their case outside the state Capitol. The General Assembly last year voted to allow casino gambling and sports betting during the same session that it adopted the initial ban on skill machines. The assembly agreed to delay the ban for one year, while taxing the machines at a monthly rate of $1,200 per machine. 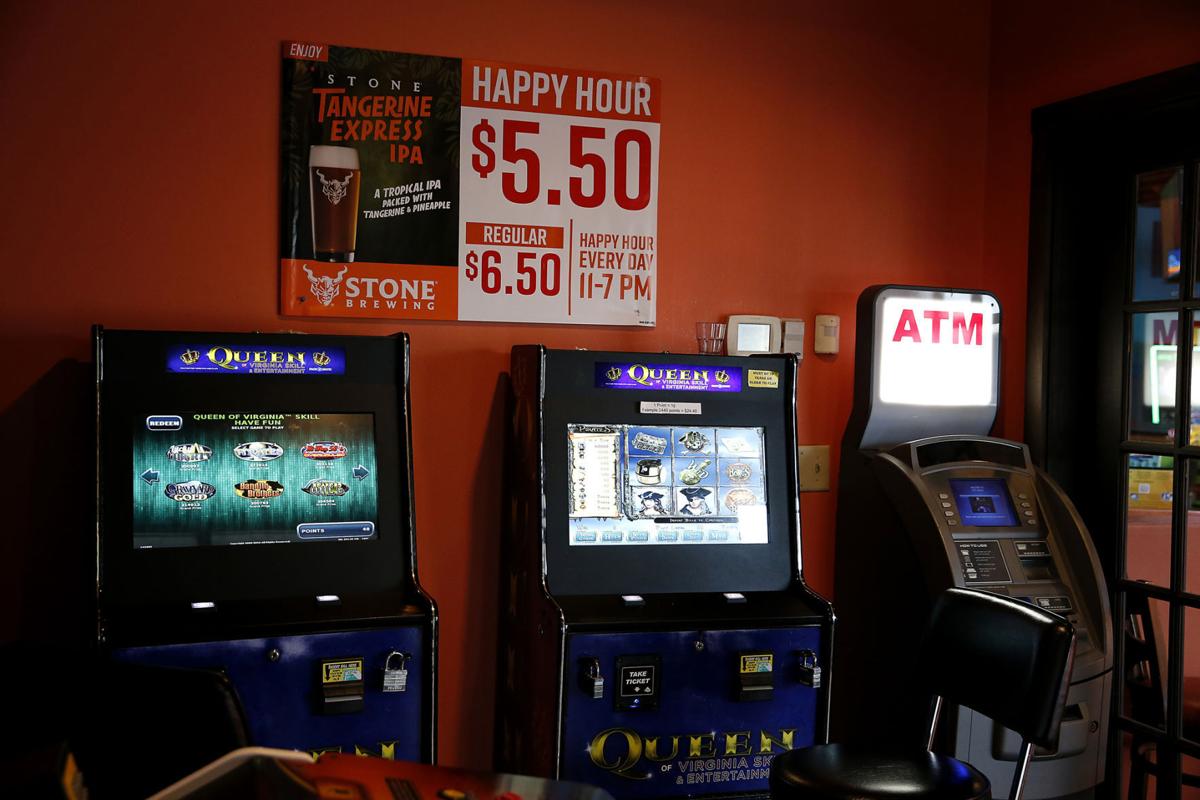 Proponents say electronic skill games have become a mainstay for thousands of convenience stores and restaurants.

RICHMOND — A group of Asian American business owners is asking Virginia Attorney General Mark Herring to investigate what they call racial discrimination by the state in banning electronic skill games in stores they own that are frequented by racial and ethnic minorities.

The Asian American Business Owners Association, based in Roanoke, filed a complaint on Saturday with the attorney general’s office, which it also asked to effectively block the ban, scheduled to take effect on Thursday, by refusing to enforce it.

The 18-page complaint takes direct aim at the General Assembly for disparaging the games and the people who play them. Specifically, it cites public comments by Senate Minority Leader Tommy Norment, R-James City, referring to legislative efforts to perpetuate skill games as “the Ali Baba bill” and Senate Finance Chair Janet Howell, D-Fairfax, who called them “sleazy.”

It also claims that an exception to the ban for games in “family entertainment centers” discriminates against adults who are not gaming as families.

“In recent years, gaming has been embraced by the commonwealth when it is enjoyed by the privileged in fancy casinos or by children in ‘family entertainment centers’,” the complaint states. “But that very same activity is not acceptable when offered by Asian American owned convenience stores or enjoyed by minority or marginalized populations.”

The discrimination complaint intensifies a high-stakes political battle of what constitutes legal gambling in Virginia, which already has opened the door to gambling at up to five casinos, sports betting and operation of terminals that look like slot machines, but operate on historical horse racing data in Rosie’s Gaming Emporiums in Richmond and four other localities, including Vinton.

The complaint follows an unrelated lawsuit that Sen. Bill Stanley, R-Franklin County, filed last week in state court that alleges an unconstitutional violation of business owners’ rights to free speech and due process, and seeks an injunction that seeks to stop the ban from taking effect. The suit, filed on behalf of Southside business owner Hermie Sadler in Greensville County Circuit Court, is not likely to be heard before the ban takes effect, Stanley said Monday.

Norment and Howell quickly defended their statements in support of the ban. They said it was necessary to stop the proliferation of thousands of previously unregulated machines in restaurants, convenience stores and truck stops, often in direct competition with the state-owned Virginia Lottery that dedicates its profits to public education.

“Give me a break!” Norment responded in a text message that noted that “Ali Baba and the Forty Thieves” was a folk story about a poor woodcutter in the “One Thousand and One Nights” collection translated into French in the 18th century.

“It is fiction just like the Asian American’s fictional argument [which] I expect some creative attorney conjured up in his sleep,” he said.

Howell texted, “I stand by my characterization,” of the games. She called them “unseemly” and “sleazy” during a legislative debate last year. The assembly agreed to a one-year reprieve that Gov. Ralph Northam requested in order to tax the machines and devote the new revenues to relief for small businesses hurt by restrictions to stop the COVID-19 pandemic.

She said she was not referring to the small businesses that operate the “gray machines,” so named because they had thrived in a previously unregulated market as purportedly legal games of skill rather than illegal games of chance, or gambling.

“I was referring to the big businesses that brought them into our state without permission or oversight,” Howell said.

The General Assembly last year voted to allow casino gambling and sports betting during the same session that it adopted the initial ban on skill machines. Lobbyists for video gaming terminals — slot machines — contended that electronic skill games are games of chance, not skill.

The assembly agreed to delay the ban for one year, while taxing the machines at a monthly rate of $1,200 per machine and regulating them through the Virginia Alcoholic Beverage Control Authority, which manages the state’s liquor monopoly created at the end of Prohibition to control sale of alcohol.

Before delaying the ban, however, Howell and other legislators secured a promise from Northam to oppose and veto any legislation that would extend the legal operation of the machines, which generated more than $100 million in tax revenue for the state in the past year.

Northam lived up to the promise this spring by asking the assembly to strike a provision that had been added to a separate bill to allow the machines to continue operating legally until July 1, 2022. The assembly struck the provision during its one-day “veto session” in April, despite opposition from Stanley and Sen. Joe Morrissey, D-Richmond.

Morrissey, in a speech on the Senate floor, said the pending ban “discriminates against small businesses,” which he said are often run by Indian, Pakistani, Yemeni and African American merchants who have depended on lucrative revenues from the machines to survive the pandemic and state-ordered restrictions on businesses to stop the spread of the coronavirus.

Last week, he hosted a radio show that featured Sadler, a former NASCAR driver who had just filed the lawsuit in Greensville on behalf of a truck stop he operates along Interstate 95 in Emporia and convenience stores he owns in Petersburg and other Southside communities.

The show also featured a lobbyist for video gaming terminal operators who are still pushing for legalization of slot machines.

“I don’t want to see any discrimination against any particular group,” Morrissey said in an interview on Monday.

“Do I think there is some discrimination going on?” he asked. “Yeah, I do.”

In February 2020, Del. Joe Lindsey, D-Norfolk, walked past opponents of a proposed ban on electronic skill games, who made their case outside the state Capitol. The General Assembly last year voted to allow casino gambling and sports betting during the same session that it adopted the initial ban on skill machines. The assembly agreed to delay the ban for one year, while taxing the machines at a monthly rate of $1,200 per machine.

Proponents say electronic skill games have become a mainstay for thousands of convenience stores and restaurants.