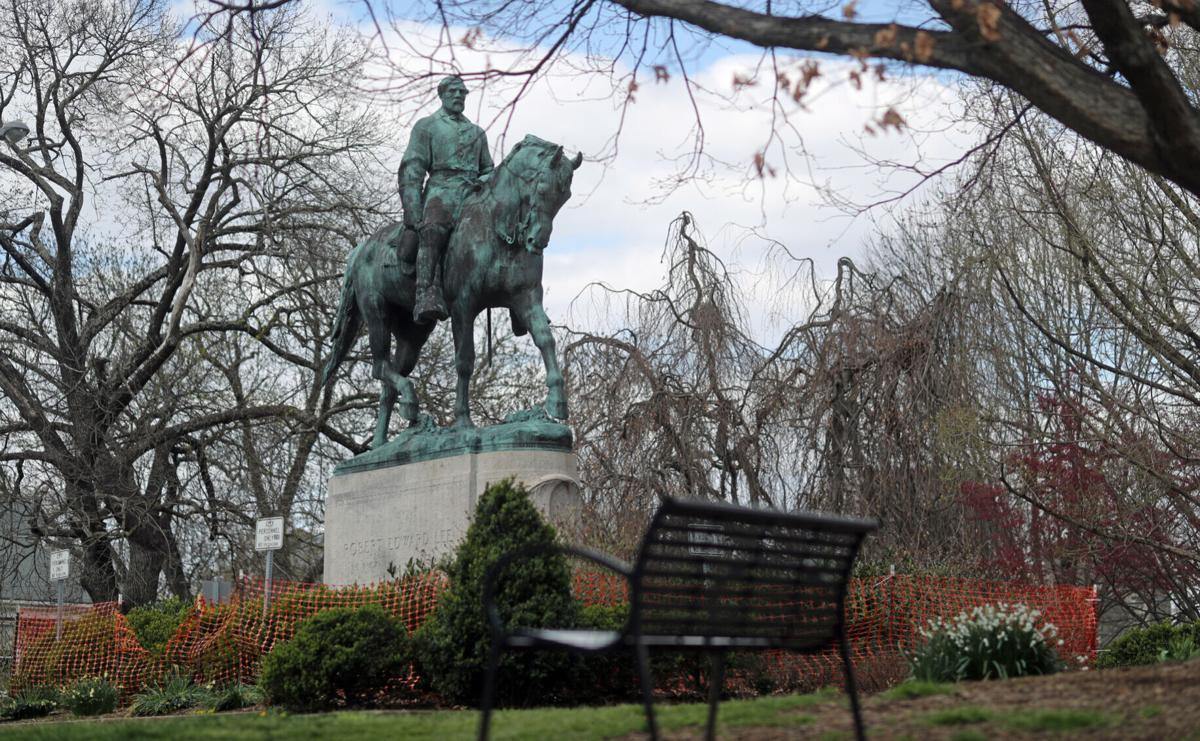 Protesters carry signs in front of a statue of Confederate Gen. Stonewall Jackson as they demonstrate against a KKK rally in Justice Park in Charlottesville, Va., in 2017.

City workers drape a tarp over a statue of Confederate Gen. Robert E. Lee in Emancipation park in Charlottesville, Va., in 2017.

The Supreme Court of Virginia on Thursday issued an opinion that clears the way for Charlottesville to remove its statues of Confederate Gens. Robert E. Lee and Thomas “Stonewall” Jackson.

The court sided with the city in its appeal of a Charlottesville Circuit Court ruling that found that the City Council violated state code when it voted to remove the statues. The court ruled in part that a previous law preventing the removal of war monuments did not apply to statues erected before 1997.

The opinion ends a years-long legal battle to remove the two statues that in its wake saw a deadly rally, legislative change and the removal of hundreds of Confederate statues across the country.

The opinion not only found that the Charlottesville Circuit Court erred when it found the city and City Council violated state code, but also vacated an injunction preventing the statues from being removed and vacated $364,989.60 in attorney fees for the plaintiffs.

In a statement sent out by the city, Mayor Nikuyah Walker said the opinion will positively impact the lives of many and thanked the city attorney’s office and others.

“I want to express gratitude to Zyahna Bryant, Dr. Wes Bellamy and Kristin Szakos for igniting the sparks that started this local mini-revolution,” she said. “We are forever indebted to the community for their steadfastness and perseverance over the past five years. For all of us, who were on the right side of history, Bravo!”

Acting City Attorney Lisa Robertson, who argued the case on behalf of the city throughout the legal proceedings and appeals, said she was pleased by the outcome.

She and the other members of the city’s legal team said they believed that, based on the unique history of Charlottesville’s Confederate statues, the state’s restrictive legislation should not be applied.

While this case was pending, the Virginia General Assembly amended and reenacted the legislation, Robertson said, changing the law in a way that is favorable for the city.

“Instead of being a preemptive, prohibitive statute, the law is now a permissive one; further, even as to statues to which the law might apply, damages and attorney’s fees cannot be sought from a locality or its elected officials,” Robertson said. “Charlottesville’s patience waiting for these issues to be addressed within the legislative and judicial systems now puts the City Council in the best position possible to carry out this work on behalf of the community they serve.”

With the last remaining legal roadblock removed, city spokesman Brian Wheeler said the City Council will begin the process of removing the monuments and that discussions could begin as early as Monday during the council’s pre-meeting closed session.

The Monument Fund, which largely financed the legal action against the city, did not respond to a request for comment Thursday.

Last June, The Monument Fund moved to alter the language of the injunction following changes to the state code that allowed monuments to be removed.

Bryant, now a second-year student at the University of Virginia, said the Supreme Court of Virginia’s opinion was “both exciting and long overdue.”

The statues are symbols of white supremacy that have material effects in the city’s schools, courts and neighborhoods, she said, and keeping the statues up under the argument of aesthetics “allows for the perpetuation of the ‘polite’ and ‘don’t ask, don’t tell’ version of racism that is not at all new to this city.”

“My goal of authoring that petition was to draw attention to the ways in which our physical landscapes reflect the deeper issues of racism and white supremacy present in our systems and institutions,” she said. “Removing the statue is just one step in the process of creating a more equitable and just community, but it is a very important step.”

Crediting those who came before her, Bryant said that in the future she believes that marginalized people in the community should have a say in the future of public spaces and should reflect the values and principles of the community.

“I hope that more students feel empowered and encouraged to fight for the issues that they care about,” she said. “This moment means so much for me as a young, Black woman who worked to help get the ball rolling on this issue, and the work continues.”

The initial lawsuit was spurred by the 3-2 vote to remove the Lee statue but was later expanded to include Jackson.

Several area residents and The Monument Fund sued the city and the council, alleging violation of a state code section that forbade localities from encroaching on war monuments and memorials. The city long argued that the law only applied to monuments erected after 1997, when the code was updated to include cities, as well as counties, a decision the state Supreme Court affirmed Thursday.

The lawsuit went to trial in September 2019, with Charlottesville Circuit Judge Richard E. Moore largely siding with the plaintiffs by ruling that the council votes violated state code. Moore issued a permanent injunction barring the city from removing the statues.

The lawsuit was subsequently appealed to the Supreme Court of Virginia, which heard the case in November.

Meanwhile, a legislative change that allowed for localities to remove monuments to wars and veterans was passed during the 2020 General Assembly session and dozens of monuments across the commonwealth were removed.

In its 12-page opinion, the Supreme Court of Virginia focused largely on one the 1997 update of code section 1812-15.2, which was dismissed from the circuit case early on. This update modified language in the code to specifically prevent cities from removing war monuments, something that prior to the update had not been included.

Using a “plain language analysis” of the update, the state Supreme Court wrote that the code section indicated that the language only applied to prospective statues erected after 1997. The Charlottesville Circuit Court erred in inferring intent from the General Assembly that was not evidenced by the words used, according to the decision.

Both the Lee and Jackson statues were erected long before there was a statute that either authorized a city to erect war monuments and memorials or regulated their disturbance or interference, the Supreme Court wrote.

The state Supreme Court acknowledged the case as an issue of first impression, and acknowledged “the thought and care with which the circuit court considered this matter,” before it wrote that the Charlottesville Circuit Court’s interpretation of the state code was “unpersuasive, and in contradiction of the actual words used in Code § 15.2-1812.”

What remains to be seen is what the removal process will look like, said Rich Schragger, a University of Virginia law professor who focuses on the intersection of constitutional and local government law.

Specifically, it’s unclear whether the Supreme Court’s opinion means the city will not have to go through the same removal process as other localities.

Per the law, before removing a monument, a locality must publish a notice of intent in a local newspaper, hold a public hearing in no fewer than 30 days and, for a 30-day period, offer the monument to “any museum, historical society, government or military battlefield.”

“The language of the amended statute uses the term ‘may’ and uses some of the prospective language that the court relied on to say that it’s not retroactive,” Schragger said. “So there is an argument that the city doesn’t have to go through the process that’s outlined in the revised statute.”

Schragger was one of the first legal experts to say the law did not apply retroactively, a stance state Attorney General Mark Herring also highlighted in a statement Thursday.

“I have worked hard to help remove poisonous Confederate propaganda from our publicly-owned spaces, because I believe it glorifies a false history and sends a dangerous and divisive message about who and what we value,” Herring wrote. “This work will continue, and I look forward to making our case for the removal of the state-owned Robert E. Lee statue [in Richmond] before the Supreme Court of Virginia this summer.”

After 18 people had adverse reactions to the Johnson & Johnson COVID-19 vaccine on Thursday, Wake County Public Health decided to "pause" …

Apr. 6—The case of a North Carolina child who police say came to school lugging about $30,000 worth of cocaine is making international tabloid headlines. The identity and age of the elementary school student have not been released, but it's the amount of drugs involved that is getting all the attention. "Child shows up to North Carolina elementary school with more than half a POUND of cocaine ...

The last remnants of an Outer Banks bridge over Oregon Inlet will soon be a fishing pier with no entry charge. The 1,046-foot-long structure stretches over rapid flowing currents where fresh and saltwater species mingle, making it a popular site for angling. The new Basnight Bridge towers above it. The state expects to open it to the public this summer. “There are dozens of very vocal ...

Kernersville’s Charles Donohoe faces charges of conspiracy, obstruction, destruction of government property and disorderly conduct connected to the Jan. 6 violence at the U.S. Capitol. He has pleaded not guilty.

“Our work has made great strides in creating a new university public memory that unflinchingly acknowledges the horrors of human bondage, while honoring the humanity of the enslaved.”

Virginia’s coronavirus vaccine supply will be dealt a blow next week, following a factory mixing problem that ruined 15 million doses of Johnson & Johnson’s shots. Instead of receiving the expected 125,000 doses from the maker, the state will get just 15,000 next week, said Dr. Parham Jaberi, Virginia Department of Health’s chief deputy commissioner for public health preparedness. The state ...

A Lynchburg-area father and son, both pilots with Piedmont Airlines, had a full-circle experience when they served as co-pilots on their first commercial flight together in March.

Protesters carry signs in front of a statue of Confederate Gen. Stonewall Jackson as they demonstrate against a KKK rally in Justice Park in Charlottesville, Va., in 2017.

City workers drape a tarp over a statue of Confederate Gen. Robert E. Lee in Emancipation park in Charlottesville, Va., in 2017.