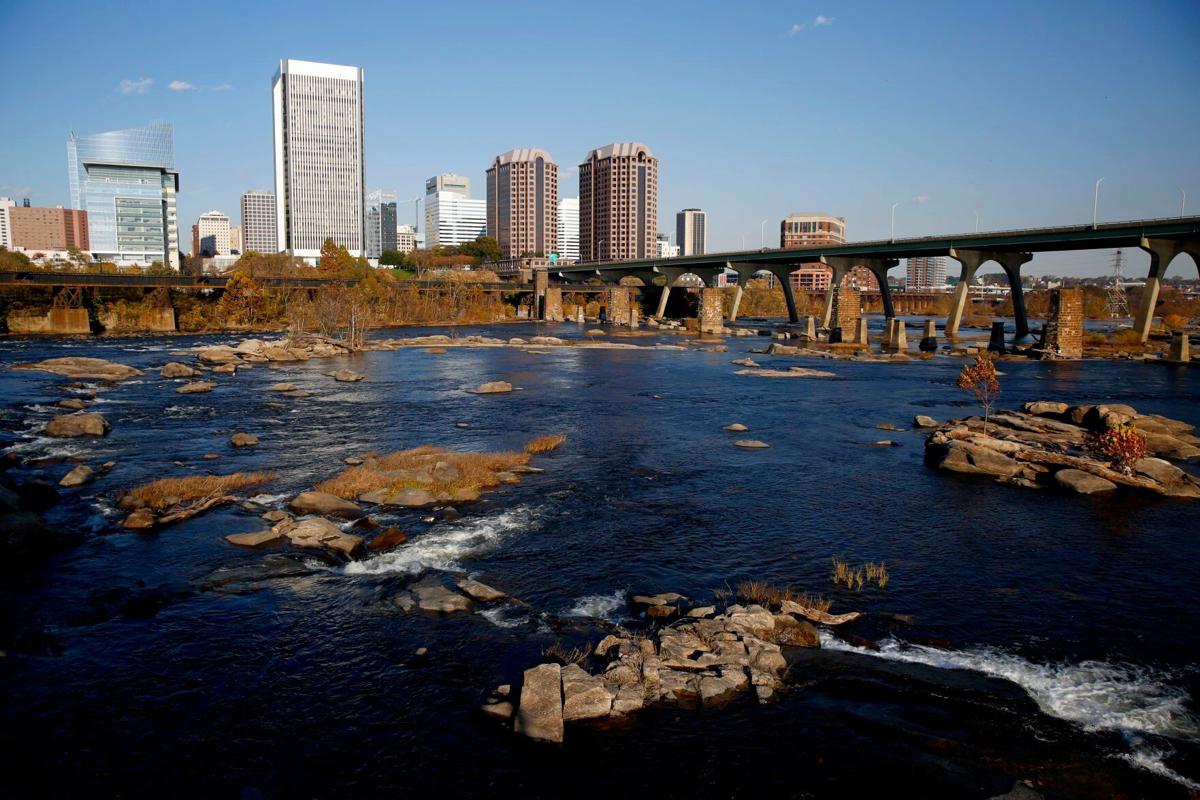 The James River and downtown Richmond are seen from the T. Tyler Potterfield Memorial Bridge this month. 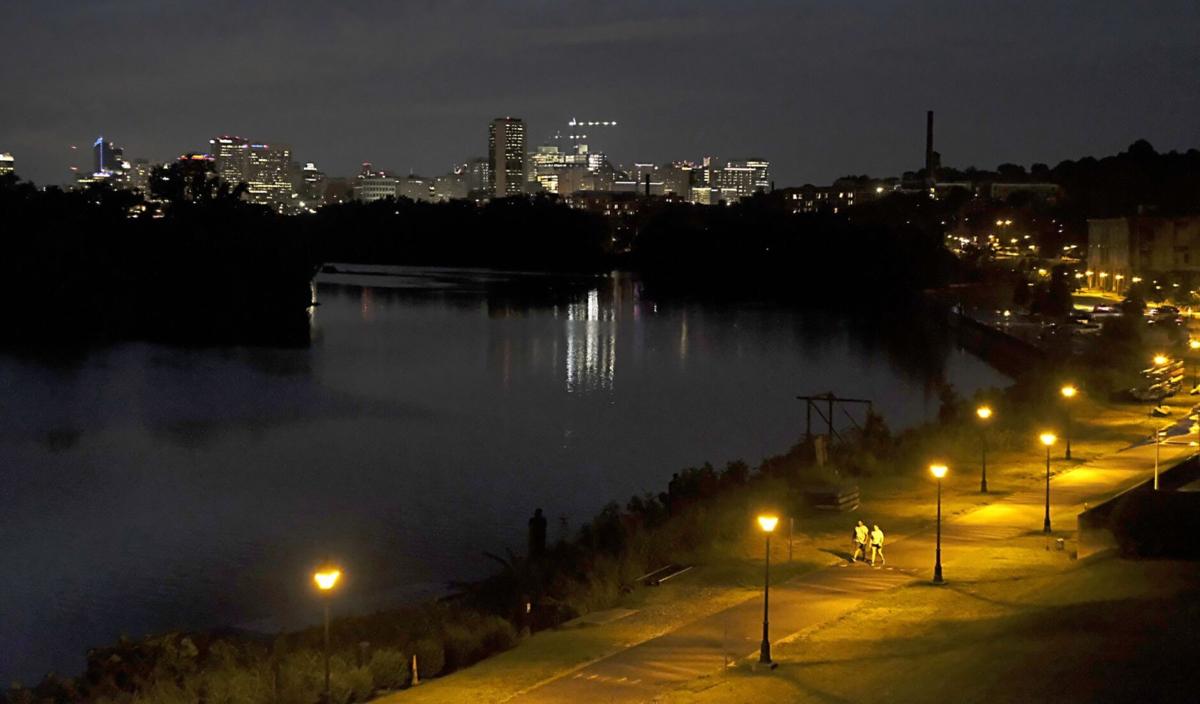 A couple walk along the Virginia Capital Trail bike path beside the James River near Rocketts Landing in Richmond on Aug. 16.

Improvement on the health of the James River has stalled over the past six years, in large part because heavy rains have carried more pollutants into the water, according to a recent report.

The James River Association, a nonprofit that monitors the river’s quality, awarded the James a grade of B-minus, the same score it received in 2015, in its biannual report released Nov. 16.

On a scale of 1 to 100, the association assigned a score of 61, one point below last year. The JRA noted the insufficient efforts to keep dirt, phosphorous and nitrogen out of the river and the near disappearance of the shad fish. And it warned of increased risk due to climate change.

To address the issues, the JRA called on the state to fund more than $500 million toward slowing agricultural and stormwater runoff. The health of the James was a small piece of the campaign of Governor-elect Glenn Youngkin, which called the James “an open sewer every time it rains.”

“The river remains a river at risk,” said Bill Street, CEO of the James River Association.

In the 1970s, the river’s health received a failing grade. But the state has addressed the problem with expanded treatment facilities and initiatives for reducing pollution. Earlier this year, the state allocated more than $400 million over three years toward clean water quality, a record number, Street said.

But the community is still struggling to keep dirt, or sediment, out of the water. Sediment pollution is the “the greatest ongoing pollution problem in the James,” the report stated, and is often caused by agriculture and land development. The effort to reduce sediment was given a score of 33%, down 23 points from last year.

Sediment clouds the water, keeping grass from growing and fish from seeing their food. The JRA called on the state to spend $361 million to address agricultural runoff through programs like the Virginia Agricultural Cost-Share Program, which pays for conservation efforts like fences to keep cows away from streams.

Nitrogen and phosphorous are worrisome pollutants, too. They enter the river from wastewater, agriculture runoff and urban stormwater. The effort to prevent both elements in the water decreased the past two years. Their presence in the water leads to algae blooms and poor water quality, killing fish and reducing habitats for other organisms.

Stormwater pollution prevention improved 2 points but received a low score of 34%. Stormwater can carry bacteria, dirt, oil and chemicals into the water. People are advised to sweep grass off their driveways instead of hosing them down and to use fertilizer sparingly.

The JRA called for the state to spend $160 million over two years for the Stormwater Local Assistance Fund, which matches local dollars on stormwater management projects.

Wastewater is of a particular concern in Richmond, where a third of the city’s sewer system combines stormwater with wastewater. When a significant amount of rain falls, the sewers near South 14th Street overflow into the James. But statewide, wastewater is less of a concern, because localities have upgraded their sewers and treatment facilities. It’ll cost nearly $900 million to replace Richmond’s outdated sewer system, Mayor Levar Stoney has said.

The river received 6.2 million visitors last year, with Richmond’s James River Park System the most attended destination. Fishermen harvest $25 million worth of seafood in the river, and some of the world’s largest oyster reefs are located here. Nearly 600,000 people have fishing licenses in the river’s watershed, and the James has more public access sites than ever before.

The James is also the largest provider of drinking water in the state. Water treatment plants mitigate most of the pollution, Street said, but the more pollution, the more expensive it is for the plants to filter the water.

“What happens in the river is very important to our drinking water,” Street said.

Eagles are flourishing. After having almost none in the 1970s, the James now has one of the densest populations in North America. The banning of pesticides and the passage of the Endangered Species Act in 1972 were key contributors, according to the report. The river’s score for eagles is 100%.

Oysters showed a “remarkable comeback,” improving 25 points to 74%, its highest score ever. Extreme levels of rainfall in 2018 killed off a number of oysters that year.

Richmond got 63.7 inches of rain in 2018, its highest total since the 1880s. Two years later, it received 63.5. The average rainfall has increased 4.5 inches over the past century, posing a risk of carrying more pollutants into the river.

Current regulations are not strong enough to keep pace with climate, the report stated.

“We need to have strong protection and restoration actions in place that promote the resilience of the river,” Ralston said.

Michael D. White was being held Monday in the Southwest Virginia Regional Jail in Abingdon.

As Gov. Ralph Northam prepares his final state budget before leaving office, he says he will leave Virginia in "a good spot" for its financial health and economic prosperity.

A contrite former Richmond bankruptcy lawyer and trustee who misappropriated $4 million was sentenced Monday to three years and eight months in prison and fined $10,000 for obstructing an official proceeding.

Democratic senators talking about tax cut plans of their own

As Gov.-elect Glenn Youngkin works with Republican legislators on a wide-ranging plan to cut taxes, two Democratic senators are talking about their own ideas to bring income tax relief to Virginians.

One of the largest not-for-profit retirement community operators in Virginia, which owns Cedarfield and Hermitage Richmond senior living communities in the Richmond area, is raising minimum wages for its staff to at least $15 an hour and adjusting wages for other employees.

Expect to pay more for this year’s Thanksgiving meal compared with 2020.

The jury found in favor of the plaintiffs on four of the six counts and ordered financial punishments and compensation totaling more than $25 million.

Troops from Virginia will be deployed to Africa to provide a security force for the Combined Joint Task Force-Horn of Africa.

This worker got jobless benefits; Virginia wants them back

ABINGDON — For 26 years, Ernest Ray worked at a company in southwest Virginia that made compressors, in a physically demanding job that involv…

Hedge fund Alden Global Capital has made an offer to acquire Lee Enterprises, which counts the Richmond Times-Dispatch, The Roanoke Times, The…

The James River and downtown Richmond are seen from the T. Tyler Potterfield Memorial Bridge this month.

A couple walk along the Virginia Capital Trail bike path beside the James River near Rocketts Landing in Richmond on Aug. 16.