The Lee statue is gone. But what happened to the time capsule hidden beneath it?
3 comments
Share this
{{featured_button_text}}
1 of 2 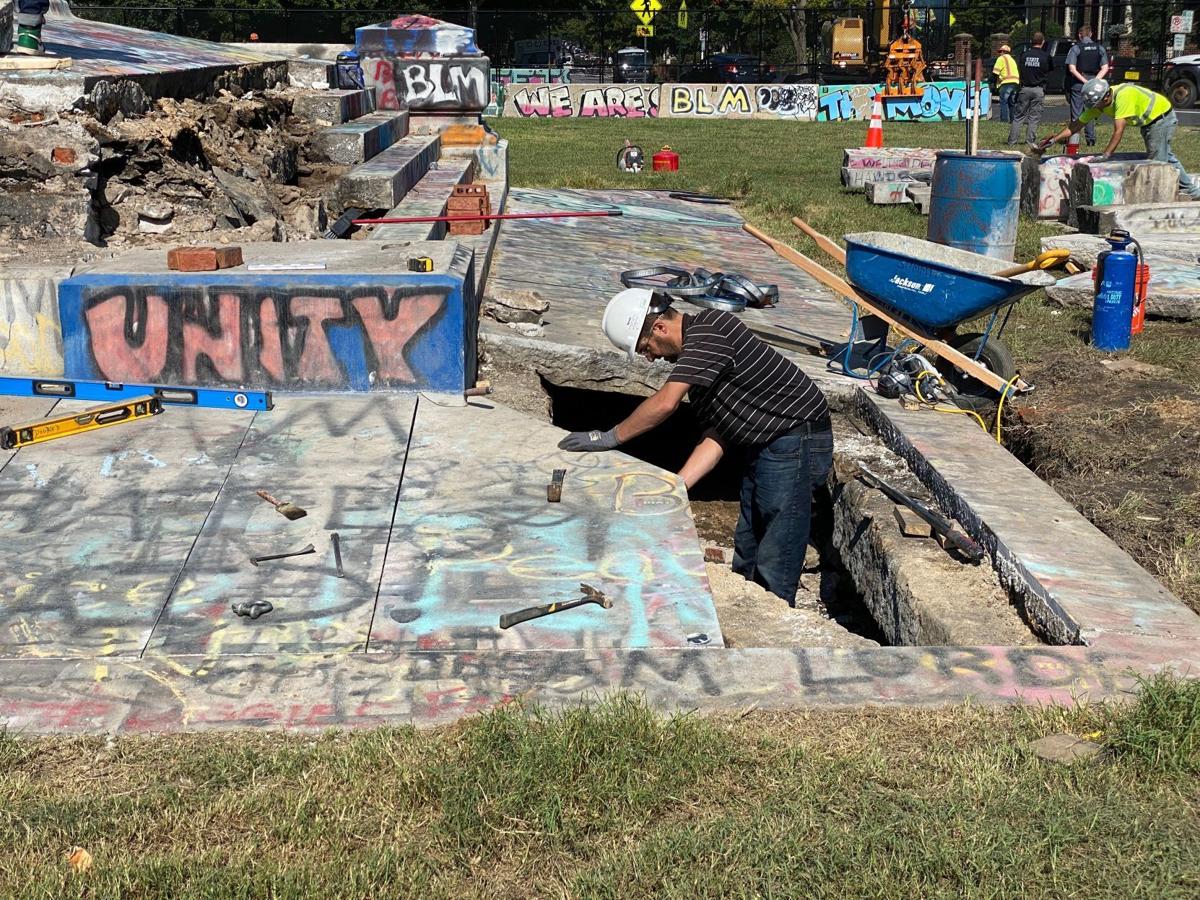 Workers replace blocks from the Robert E. Lee statue base. The 1887 time capsule believed to be under the cornerstone was not found after the statue’s removal. 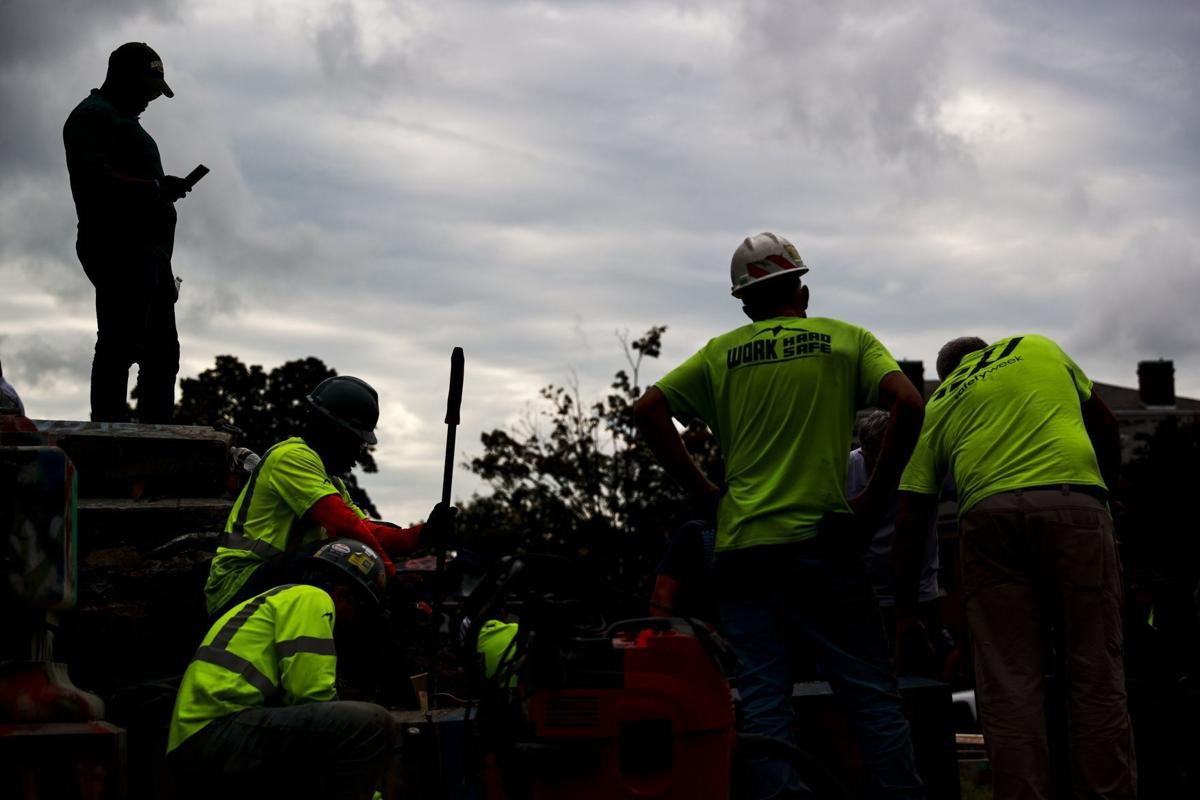 Devon Henry, owner of the construction company that removed the Robert E. Lee statue, takes a picture of the progress as crews work on retrieving a time capsule on Sept. 9 at Monument Avenue in Richmond. A new time capsule will be installed in the base.

RICHMOND — The Robert E. Lee statue is gone from Monument Avenue. Its pedestal remains, and so does the black chain-link fence encircling the 200-foot wide patch of grass. Lawyers continue to argue in court about the statue.

But what happened to the time capsule supposedly buried there? And will the mystery ever be solved?

In June, Gov. Ralph Northam announced plans to excavate the time capsule, believed to have been placed under the northeast cornerstone in 1887. According the Daily Times and Richmond Dispatch newspapers, a copper box contains 60 objects related to the Confederacy and Richmond, including a picture of Abraham Lincoln lying in his coffin.

The governor’s office commissioned its own time capsule containing objects relevant to the pandemic and last year’s Black Lives Matter protests to replace the old one.

David Givens, director of archaeology for Jamestown Rediscovery, used ground penetrating radar and found a void in the northeast cornerstone. But they were drill holes workers used to lower the block in place, not a void for the capsule.

Last month, a day after Lee came down, a masonry crew spent 12 hours prying 19 granite blocks off the pedestal in search of the 1887 relics. But when the sun began to set and they hadn’t been found in or under the cornerstone, the governor’s office called off the search.

Northam’s office issued a statement saying it was finished: “After a long hard day, it’s clear the time capsule won’t be found — and Virginia is done with lost causes.”

Three theories, some more likely than others, have arisen that could explain what really happened:

This is a popular theory among the historians and an archeologist who have studied the pedestal.

When the cornerstone was placed in 1887, the pedestal hadn’t been designed yet, and it wasn’t completed until early 1890, the same year the statue was revealed. The final pedestal was different than originally intended, too. According to the Southern Historical Society papers, additional carved figures were left off the pedestal because the city lacked the money to pay for it.

In 1890, another change occurred when a “guttering” was built around the foundation, which might have been the large ditch workers discovered last month at the edge of the foundation.

Maybe the width of the base now is wider than the original foundation, said Sarah Driggs, historian and author of the book “Richmond’s Monument Avenue.” That would make the original cornerstone closer to the inside of the pedestal.

“We don’t know how big the foundation should have been,” Driggs said.

Why place a cornerstone for a pedestal that hadn’t been designed? There was a lot of debate about where to place the Lee statue, Driggs said. Libby Hill and Gambles Hill were considered. But city leaders decided if the Lee statue would improve the prestige of a new neighborhood, the city would benefit with larger real estate tax revenue. Placing the cornerstone ended the debate, Driggs said.

If it’s not farther in, maybe it’s farther down, hidden under a few feet of mortar and rock, said Dale Brumfield, an author and historian who has studied the time capsule. The northeast cornerstone looked special. It was finished on all six sides and looks like it was meant to be put on display during the large ceremony held in 1887 when the cornerstone was placed.

A newspaper account says workers embedded the time capsule in masonry, so Brumfield believes the capsule is right where workers looked for it. They just didn’t go far enough.

The farther under the rock and rubble, the less likely the time capsule’s contents have survived the air and water that can destroy them, he added.

But burying it that deep isn’t consistent with other time capsules, said David Givens, director of archaeology for Jamestown Rediscovery. Time capsules are meant to be found. He believes it’s in one of the other corners.

While the mystery continues for now, there is reason to believe the answer could be found one day. The Monument Avenue commission is tasked with reimagining the street, and should they decide to remove the 12-ton, 40-foot-tall pedestal, researchers could have another chance to examine it. A plan is due next September.

2. It was stolen before the statue was finished.

The cornerstone was laid Oct. 27, 1887. But the pedestal wasn’t finished until 1890, the same year the statue was unveiled.

A newspaper account describing the statue’s arrival in Richmond said that the boxes in which the statue came in would have been “chipped away and carried off by relic hunters” had there not been a police officer standing guard.

But moving the cornerstone would have been very difficult. The one removed by workers last month weighed 8,000 pounds. The stone placed in 1887 was carried by eight mules, layered under cement and covered with a capstone, according to the newspapers.

“That’s a lot of machinery to lift a heavy stone,” Driggs said.

There’s at least one other method of looking for the time capsule without disassembling the pedestal. It could be scanned with an electromagnetic induction, similar to a giant metal detector, Givens said. And if that doesn’t find it, Givens believes that eventually a more sophisticated tool will be invented that will bring answers.

“I’m positive science will catch up to the issue of finding it in the future,” he said.

3. The whole thing was a hoax.

The newspaper accounts paint a pretty clear picture of where the time capsule should have been located. But when masonry workers lifted up the northeast cornerstone, they found no evidence suggesting a time capsule was ever there.

There were so many published details about the time capsule, it’s hard to believe it never existed, Driggs and Brumfield said. The size of the copper box, its builder, its contents and the names of the people who contributed items were all published in both newspapers. The message inscribed into the box and the time and place the box were sealed were all reported in the news.

“There’s too much evidence it was put there,” Brumfield said.

Givens agrees, given that time capsules have been discovered in other monuments.

Workers replace blocks from the Robert E. Lee statue base. The 1887 time capsule believed to be under the cornerstone was not found after the statue’s removal.

Devon Henry, owner of the construction company that removed the Robert E. Lee statue, takes a picture of the progress as crews work on retrieving a time capsule on Sept. 9 at Monument Avenue in Richmond. A new time capsule will be installed in the base.