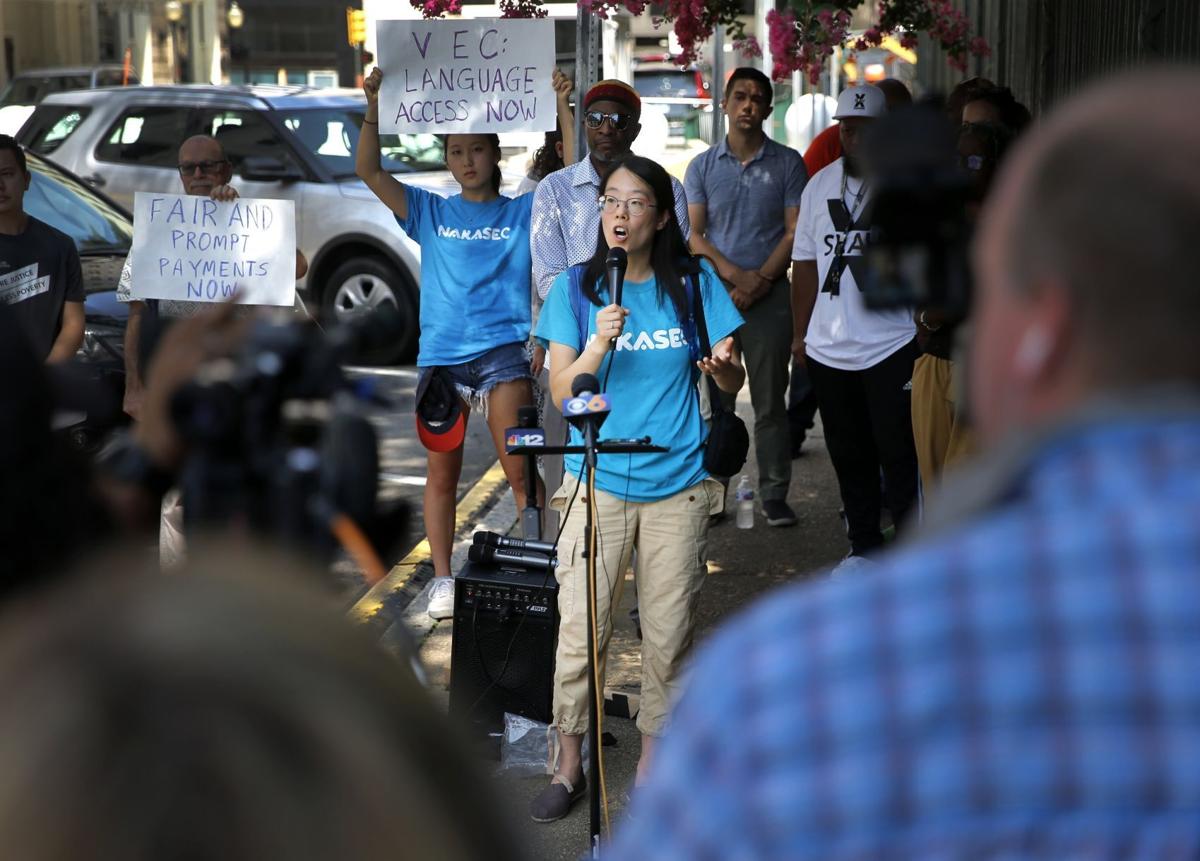 Sookyung Oh spoke about language access problems in July during the Unemployment Action Coalition’s protest in Richmond against the Virginia Employment Commission. 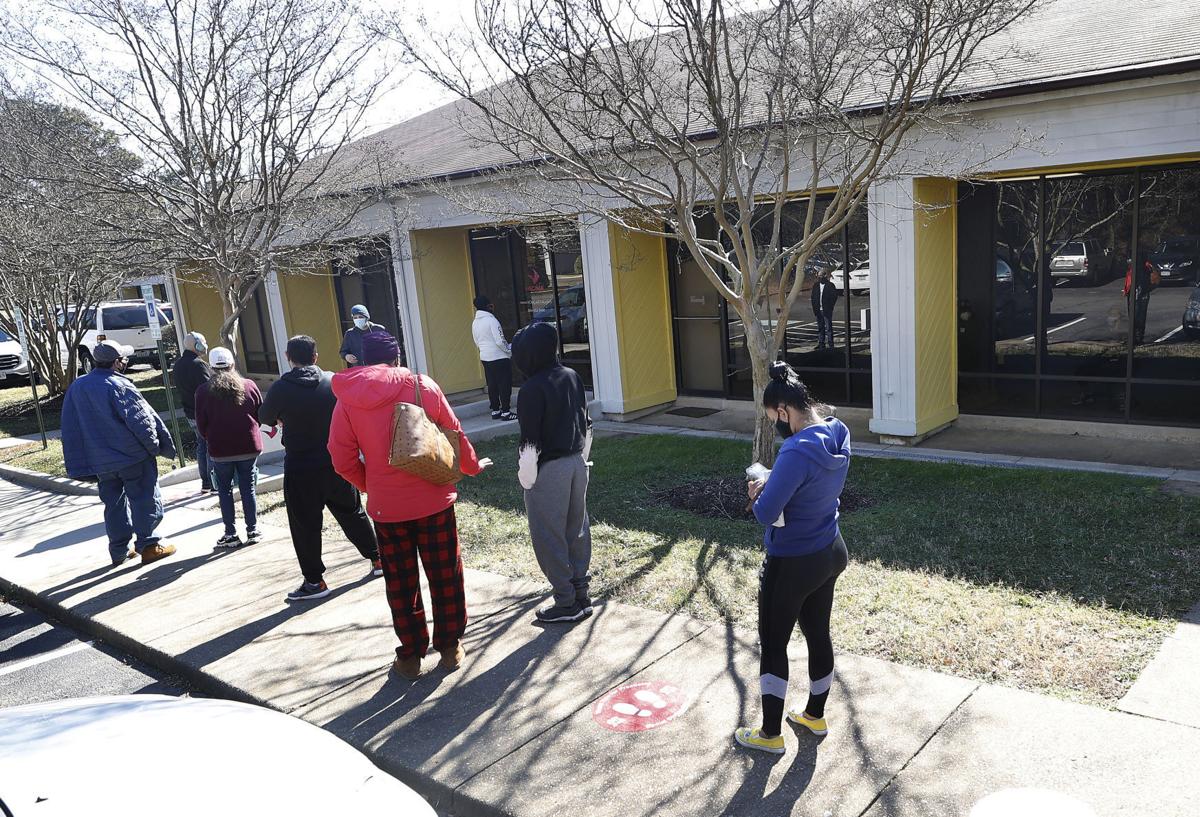 People lined up in February at a Virginia Career Works center in Chesterfield County for a chance to talk to someone from the Virginia Employment Commission about jobless aid.

RICHMOND — The Virginia Employment Commission claimed victory this week in its quest to fulfill a federal court agreement to resolve more than 90,000 disputed requests for unemployment benefits by Labor Day.

Separately, the legal team for five Virginia women who filed the suit acknowledged progress by the VEC in reducing the backlog of unresolved claims, but said it’s still too hard for people to get timely answers about their benefits and faulted the agency for cutting off benefit payments for thousands of people without properly addressing their claims.

The VEC filed the request 11 weeks after the judge approved a settlement agreement that prompted Gov. Ralph Northam to commit $20 million to bolster an agency overwhelmed by a historic surge in unemployment claims during the COVID-19 pandemic. A timeline for the court’s decision wasn’t immediately available.

Virginia Employment Commissioner Ellen Marie Hess told the court that the agency had reduced the number of disputed unemployment claims from 92,128 to 1,860 — a 98% drop that met the requirement in the settlement agreement in late May to resolve at least 95% of the cases by Sept. 6.

“The backlog of outstanding unemployment benefits adjudications is effectively gone,” Hess said in a seven-page status report filed with the court late Tuesday.

“The settlement order fully resolved the issues and claims within this lawsuit,” she said. “No further actions are required by the VEC to expedite the resolution of unpaid claims awaiting adjudication.”

Not so fast, said the legal team that filed the suit in federal court earlier this year.

“The VEC is saying ‘mission accomplished,’ but there’s still a lot of unfinished business to attend to,” said Pat Levy-Lavelle, an attorney for the Legal Aid Justice Center in Charlottesville. “Folks across Virginia are still reporting they haven’t gotten their questions answered and they’re still waiting for benefits.”

“We think the request for dismissal is premature,” Levy-Lavelle said, “and that Judge Hudson’s continued oversight is key to making sure Virginia’s unemployment system works for everyone.”

In a separate court filing on Tuesday, he and other advocates said “the VEC finally appears to be on the right track” in answering calls from unemployed Virginians frustrated over unpaid benefits and in resuming payments that the agency had improperly ceased before resolving disputes, primarily over proof of identity and prior employment.

“But the agency’s delays are inexcusable, and those delays have caused (and will continue to cause) significant harm to vulnerable Virginians,” they said.

In addition to the Legal Aid Justice Center, the team includes the Virginia Poverty Law Center, based in Richmond; Consumer Litigation Associates, a law firm in Newport News; Legal Aid Works, of Fredericksburg; and Kelly Guzzo, a law firm in Fairfax.

Secretary of Labor Megan Healy praised the VEC’s efforts to carry out both the legal settlement and the executive directive that Northam issued in May ordering steps to reduce the backlog of unresolved cases.

“The Virginia Employment Commission has worked overtime to comply with the governor’s executive directive—and they have delivered results,” Healy said.

Healy also credited Northam for investing $73.6 million in federal aid in the budget adopted by the General Assembly on Monday to bolster “our chronically under-funded unemployment system, which will ensure VEC can continue to improve technology, increase call center capacity, and maintain highly-qualified staff to assist Virginians.”

The governor’s office has blamed some of the system’s problems on federal funding that shortchanges Virginia for its share of the payroll taxes that employers pay to maintain the system.

The VEC’s report of dramatic progress came a month after the Joint Legislative Audit and Review Commission — the General Assembly’s watchdog agency for state government — heard discouraging news about unanswered telephone calls to the agency, the loss of employees to settle disputed claims and continuing concerns about the long-deferred upgrade of an antiquated computer system that is critical for unemployed Virginians to track their claims.

All of those issues were central to the court settlement agreement reached on May 10 and approved by the judge on May 25 to ensure that VEC responded effectively to requests for benefits from people who felt lost in the struggling state unemployment system.

Since the report to JLARC, the VEC has ramped up adjudication of disputed claims, often involving complex legal issues about eligibility for benefits.

The agency was resolving just over 6,200 claims a week in late May. By late July, the VEC was settling more than 20,000 cases a week, after hiring and training 226 contract hearing officers to handle disputed claims, along with 183 agency employees. The effort peaked last week with the settlement of 38,429 cases in the seven days ending Saturday.

However, Levy-Lavelle said advocates would file a freedom of information request at VEC on Wednesday to determine the size of the backlog in disputed claims that have arisen since the settlement agreement, as well as how many people who have been receiving benefits are still awaiting final adjudication of their eligibility, subject to potential repayment.

Advocates “believe the overall number is significant,” he said.

The VEC also reported improved service at state and private call centers with the hiring of 300 people to handle public inquiries, with the second wave of the new employees beginning work on Tuesday. “These new call center agents, which are in addition to the approximately 200 VEC regular employees assigned to the call centers, will improve customer service, and make the VEC’s customer support center more accessible to the public,” Hess told the court.

The VEC hired Deloitte, a consulting firm, to establish the new call center in late July, the day after Hudson initiated a telephone conference call with attorneys in the case to express concerns about telephone calls to his office seeking help with unemployment claims.

Advocates said the state’s additional efforts should ensure that calls are answered, but it doesn’t necessarily get people the help they need.

“Calls appear to be answered more frequently at the VEC’s Customer Contact Center, but persons answering the calls often cannot provide much, if any, help or information,” the attorneys told the court.

Hess also acknowledged that the agency had changed its policy for paying benefits to people with continuing unemployment claims after receiving guidance from the U.S. Department of Labor directing the VEC to resume payments that the state had terminated because of documentation of identify or proof of employment.

Advocates cited three cases alleging that the VEC abruptly cut off payments to unemployed Virginians, even though they had submitted required proof of identity or employment.

Under the law, they said the VEC must presume continued eligibility and pay claims “until the agency makes a formal determination that the claimant is not entitled to benefits.” Advocates have pushed the VEC to address the issue since last fall, but said the agency had not done so effectively until receiving guidance from the federal labor department at the end of July that the state must continue payments until it makes formal rulings on eligibility.

By carrying out the federal guidance, the said the VEC “has released benefits to thousands of Virginians — which is good.”

But, they added, the agency’s previous decision to end those benefits “has been devastating to Virginians trying to survive day-to-day.”

Sookyung Oh spoke about language access problems in July during the Unemployment Action Coalition’s protest in Richmond against the Virginia Employment Commission.

People lined up in February at a Virginia Career Works center in Chesterfield County for a chance to talk to someone from the Virginia Employment Commission about jobless aid.