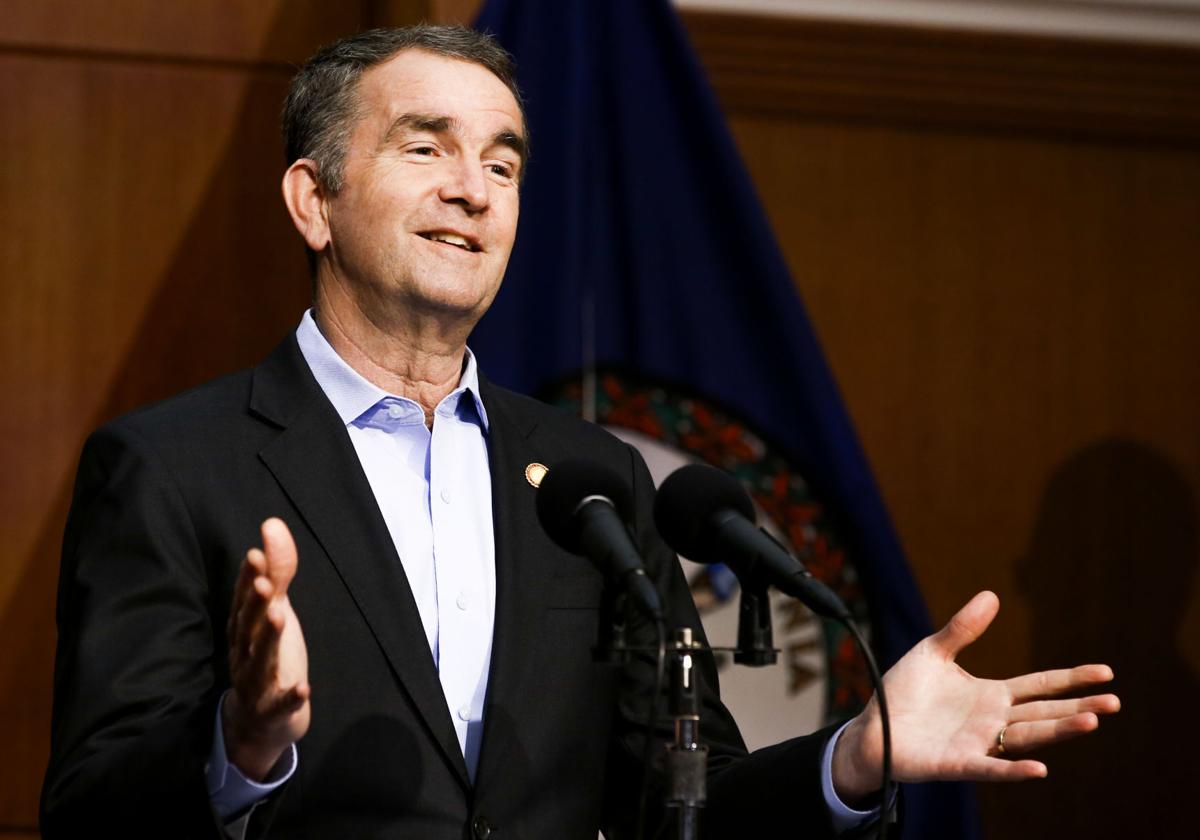 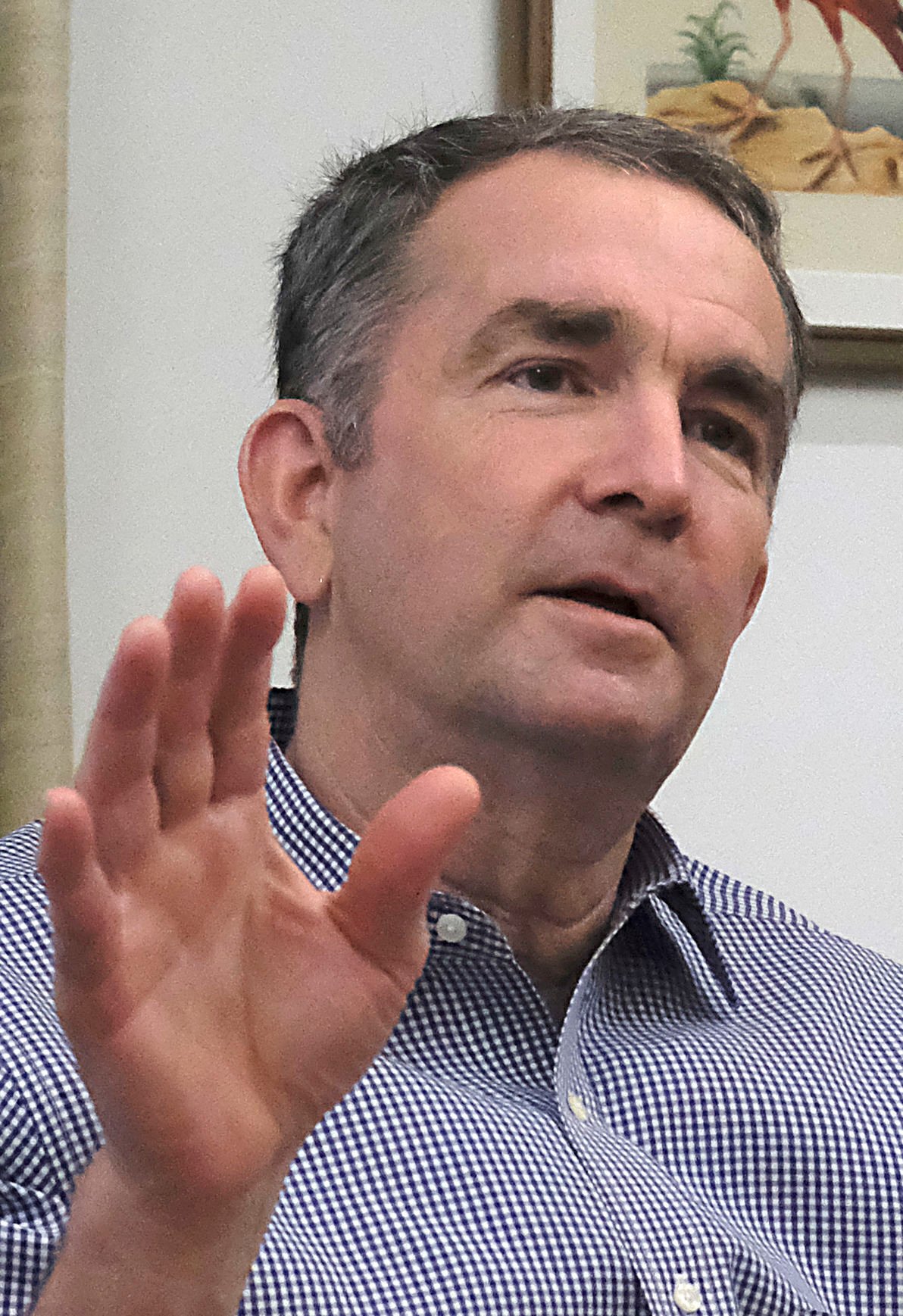 Gov. Ralph Northam gestures during an interview in his office inside the Patrick Henry Building in Richmond.

RICHMOND — Virginia will ease restrictions on social gatherings starting April 1, when the limit will increase from 10 to 50 people indoors and from 50 to 100 outdoors, according to a new order from Gov. Ralph Northam.

The governor announced the revised public restrictions during a news conference Tuesday that focused on a declining trend of new COVID-19 cases statewide and a key benchmark in the state's progress toward herd immunity: one in four Virginians have received at least one dose of the COVID-19 vaccine.

Northam also announced an increase in the state's supply of vaccines from Johnson & Johnson, which will send 48,000 vaccines to the state next week, up from 9,000 in the most recent allocation.

"There is still a lot of virus out there, but that number has hit a plateau and we are watching it closely,” Northam said. “There is still a big improvement over where we were a few weeks ago."

Over the past week, Virginia averaged about 1,400 new COVID-19 cases per day, according to state data. The numbers reflect a stark departure from the infection rates seen at the start of the year, when the state surpassed 6,000 cases per day averaged over a week. The positivity rate — the rate of positive tests among everyone tested — is about 6%, down from a January peak of 17%.

Other restrictions, like the mask requirement and limits on capacity at restaurants, will remain in place. Northam emphasized that Virginians should remain cautious.

“This isn’t about opening up the floodgates, it’s about taking a measured approach,” he added.

Entertainment venues will continue to operate under a 30% capacity limit, but larger spaces will benefit from a higher cap on people allowed inside. Previously, indoor venues could host 30% of their capacity or 250 people, whichever is less; the limit will now be 500.

Outdoor venues currently can host 30% of their capacity or up to 1,000 people, whichever is less; now only the 30% capacity threshold will apply.

Northam said that venues like the Richmond Raceway, which can hold about 50,000, can safely host more than 1,000 spectators. He said there is enough room for people to space out, and the infrastructure to allow for auxiliary services to be delivered safely.

Recreational sporting venues, which include high school courts and fields, will also be able to increase their capacity. Indoor venues will be allowed to fill up to 30% of their capacity or 100 people, whichever is less. Previously, the person cap was 25 people.

Outdoor venues can fill up to 30% capacity or 500 people, whichever is less; previously, they were limited to 250 people.

The remaining public guidance and restrictions will remain in effect, including the state's mask mandate and a ban on bar seating and alcohol service past midnight.

Dr. Rochelle Walensky, director of the Centers for Disease Control and Prevention, has urged states to be cautious and the public to “recommit” to safety, or else face “another avoidable surge.”

Northam emphasized that Virginians should continue to act cautiously as Virginia remains months away from herd immunity.

At the same time, Northam said that if COVID-19 trends in the state — particularly hospitalization rates and ventilator use among COVID-19 patients — trend down, the state could see further easing of restrictions in May.

Northam on Tuesday also offered limited details about the state’s plans for vaccinating children, which state health officials have said will be key to reaching herd immunity.

Northam said the state is planning a statewide survey of parents to gauge interest or hesitancy in vaccinating their children, which the state will use to target messaging and outreach.

“I think that it will be very helpful to let us know where people are as a baseline, what we need to do to better message and better educate people, and it’ll also help as far as planning,” Northam said.

While vaccine trials on children remain ongoing, Northam said that vaccinations will likely be rolled out by age group, with children between 12 and 18 first, followed by younger ones in phases.

Northam said he is mourning the victims of mass shootings at an Atlanta-area spa on March 16 and Monday inside a grocery store in Boulder, Colo.

Northam said he has seen a “rise in ugly, hateful, racist rhetoric — and too often violence — directed at Asian people. That is not acceptable in the country and especially not here in Virginia.”

“These are yet more examples in a long and heartbreaking list of tragedies driven by men who had access to firearms,” Northam said. “We need action at the federal level.”

Jason Lail was healthy before he got COVID-19. He loved to hunt and fish. He played with his children. He had no medical conditions.

More Virginia children are hospitalized for COVID than ever before

Thirty-two of the 252 Virginia children hospitalized with COVID-19 last week were being treated at Carilion Roanoke.

30 Richmond employees are on unpaid leave for not complying with vaccine mandate; 360 applied for exemption

About 10% of Richmond city employees will not be required to get a COVID-19 vaccine after applying for an exemption to the city’s shot mandate.

Gov. Ralph Northam gestures during an interview in his office inside the Patrick Henry Building in Richmond.