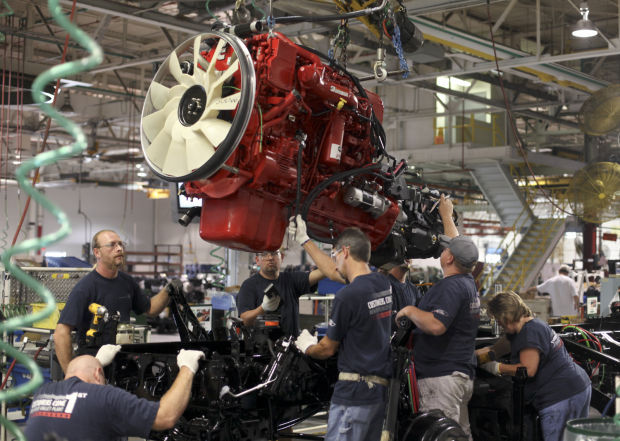 Workers assemble a truck at the Volvo Trucks plant in Dublin. 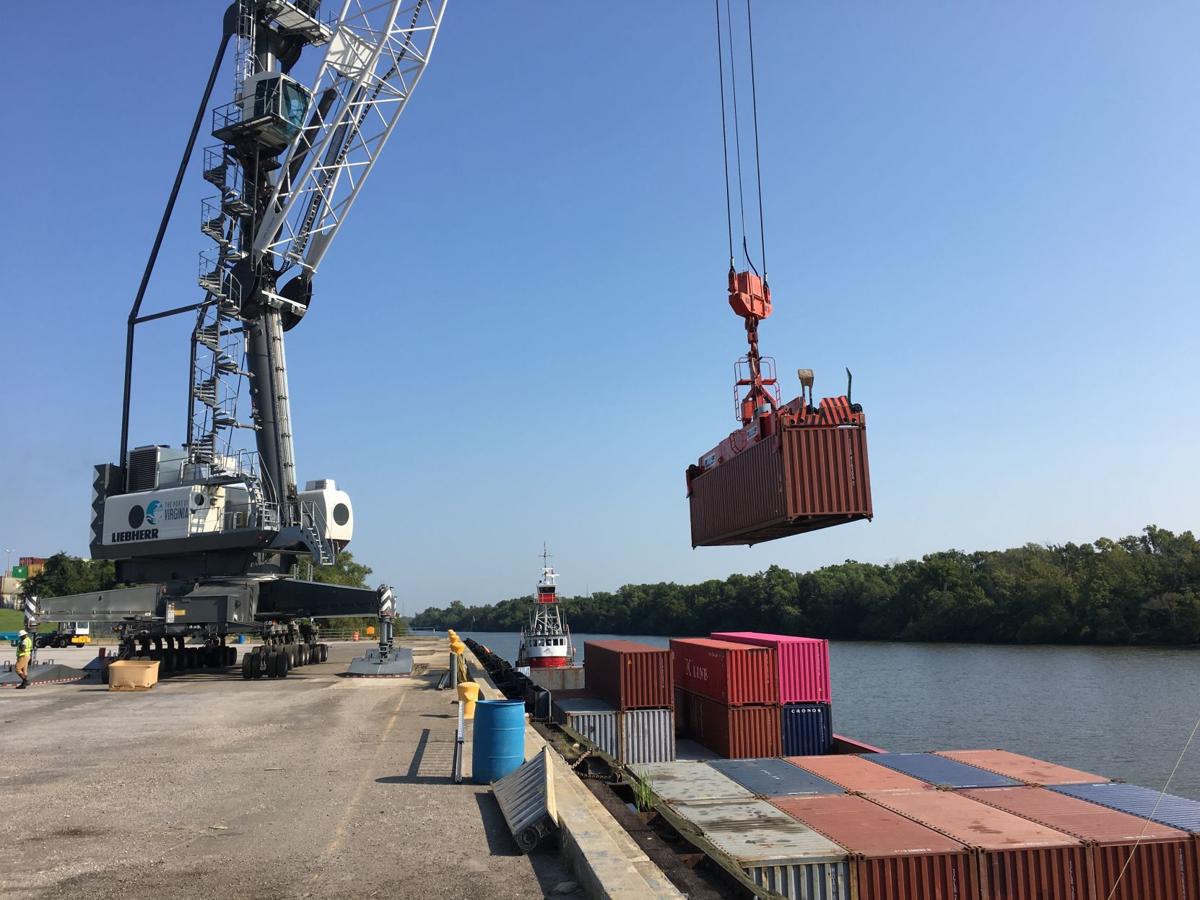 A container is being lifted off a barge at the Port of Virginia’s Richmond Marine Terminal in South Richmond. 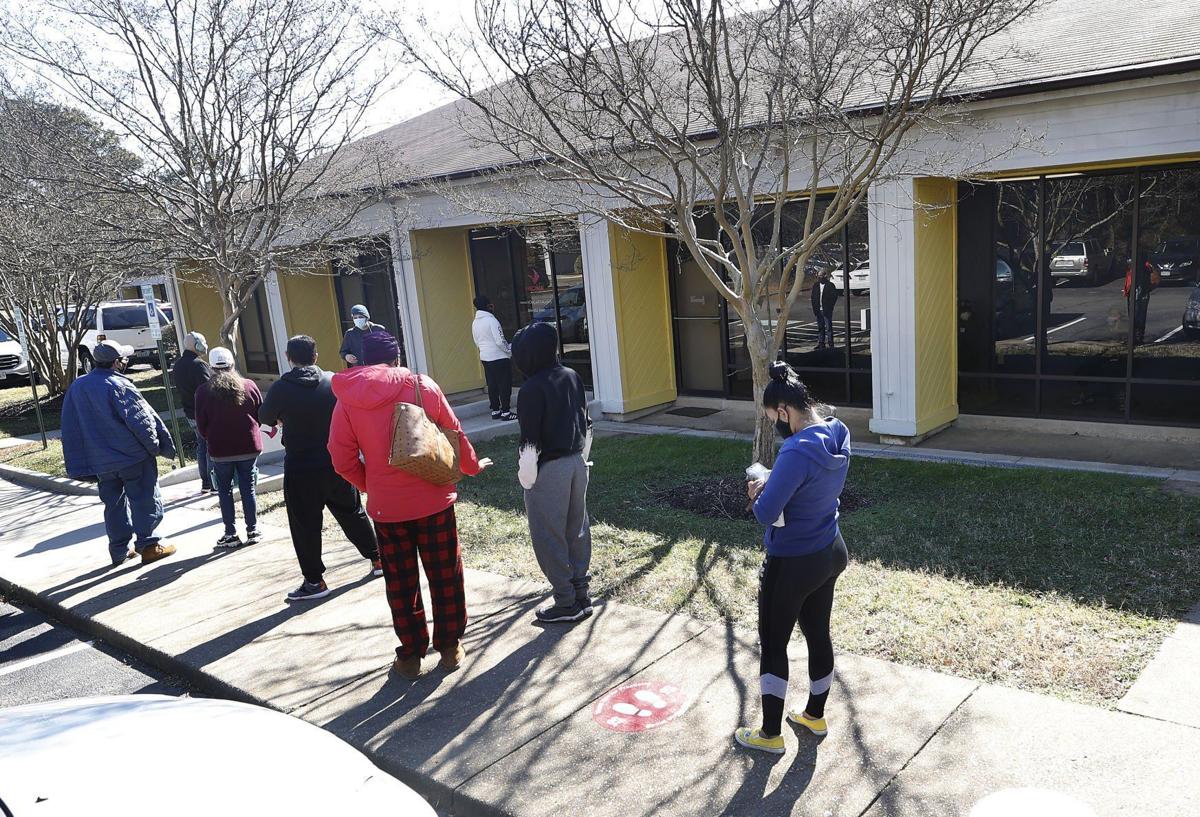 People lined up in Chesterfield County in February for a chance to talk to someone from the VEC about benefits.

Virginia’s unemployment rate has been declining for 18 months since peaking at 11.3% in April 2020 at the height of business closures caused by the pandemic.

The rate dropped to 3.4% by November of this year — the latest month for which data is available. Virginia’s seasonally adjusted unemployment rate was below the national rate of 4.2%.

Virginia has recovered 75% of the jobs it lost in March and April of 2020, or about 360,000 of the roughly 480,000 jobs lost during the pandemic, said Joseph Mengedoth, a regional economist for the Federal Reserve Bank of Richmond.

November marked the fourth straight month in Virginia of employers adding more than 10,000 jobs per month, Mengedoth said. However, the state’s labor force — essentially the number of people either working or actively looking for work — is still down from its pre-pandemic high of more than 66%. It stood at a little more than 63% in November.

“Labor force participation is still relatively down,” Mengedoth said. “It has not improved to its pre-pandemic levels, but it is up recently.”

The number of people who have quit jobs to look for other work also has increased, Mengedoth said.

“There are a lot of opportunities for those looking for work,” he said. “The demand [for work] exceeds the supply, and the shortage of workers is due at least in part to having so many people out of the labor market.”

Some Virginians got a pay raise this year and more will get another one on Saturday, thanks to an increase to the state’s mandatory hourly minimum wage.

Labor force shortages have been widely attributed to enhanced unemployment benefits that were offered to jobless people through the summer of 2021, but a recent report by Old Dominion University questions that conclusion, arguing that numerous factors have gone into the reluctance of workers to return to the job market.

Surveys suggest that other factors such as child care availability, pandemic-related health concerns and people transitioning from one type of work to another also have had a major influence on labor force contraction. The number of people who are retiring also has ticked upward.

The recent trend in workers quitting their jobs in record numbers is not unique to Virginia. Nationwide, it has been dubbed “The Great Resignation.”

“One of the reasons that people are not looking for work is of course the pandemic and fears about the pandemic,” said Robert McNab, an ODU professor of economics and lead author of the annual State of the Commonwealth report produced by ODU’s Dragas Center for Economic Policy and Analysis.

“The second observation that we see is childcare availability, and that tends to impact women more than men,” he said.

When taking into account departures from the labor force, the true unemployment rate in Virginia probably lies somewhere between the 3.4% official rate and alternative measure of 7.9%, according to the ODU report.

“What we are seeing in Virginia is two phenomena happening at the same time,” McNab said. “There is a recovery in jobs. We have seen the number of unemployed decrease.”

However, “in some regions, the labor force has actually shrunk, which means the headline unemployment rate is biased downward,” McNab said. “We have to figure out a way to get people back into the labor force, and that is going to be a hard issue.”

The ODU report says 2021 “was a definite improvement over 2020,” in terms of job creation and overall economic activity. However, it also concludes that the recovery has been uneven.

Before the pandemic, the Virginia economy had grown during 10 of the previous 12 quarters. The onset of the COVID-19 pandemic led to a 2.9% contraction in real GDP in the first quarter of 2020, followed by a historic 28.6% decline in the second quarter of 2020.

The historic decline was followed by a historic expansion in economic activity as Virginia “reopened” in the third quarter of 2020.

After growing by 5.2% in the last quarter of 2020, however, the fall 2020-winter 2021 wave of infections, hospitalizations and deaths led to a slowdown in the recovery during the first quarter of 2021. As infections eventually subsided and vaccinations increased, growth ticked upward by 5.8% in the second quarter of 2021.

The housing market also remains strong, but McNab also expects that the Federal Reserve will need to increase interest rates in 2022 to counteract rising inflation, which results in higher prices for consumers.

“They have announced they expect three interest rate increases,” McNab said. “I would argue the number will likely be higher or those rate increases will be greater than 25 basis points at a time, especially the sustained increased in producer and consumer price inflation in 2021.”

A few industries in Virginia have fully recovered the jobs that were lost during the pandemic, such as professional, scientific and technical services, and transportation and warehousing, Mengedoth said.

The hardest hit industry has been leisure and hospitality, especially in businesses that are arts and entertainment related, and in accommodation and food services. The entire sector is still down about 15%, or about 60,000 jobs, from its pre-pandemic levels.

Corporate travel and business meeting travel has been the laggard, as corporations and government agencies are hesitant to mandate travel or hold large gatherings.

“The continued uncertainty surrounding the pandemic and new variants is the biggest headwind we face,” he said.

Hiring and retaining employees is the single most difficult challenge at this time, Reed said.

“Hourly wages for some positions have increased as much as 40% from pre-pandemic levels, and we still have difficulty attracting candidates, especially for housekeeping, maintenance and F&B [food and beverage] positions.”

Yet Reed said the increase in Virginia’s minimum wage to $11 per hour will not have much impact.

“Our company will see little impact from the increase in minimum wage, as all of our positions now are paid above that threshold,” he said.

A photo of her sitting behind Youngkin on Monday, shooting burning eyes at the new governor, has already been turned into a meme.

The downtown museum could become a state entity if the General Assembly passes a bill filed by Sen. John Edwards.

Gov. Glenn Youngkin says he will "consider all options" to preserve an opt-out for parents from local school mask mandates amid push back from some school districts and some Democrats who say state law requires Virginia to follow federal guidance that recommends masks in schools.

Partisan debate erupts in Va. Senate over Miyares' firing of 30 in AG's office

Partisan debate unfolded Tuesday in the state Senate over Attorney General Jason Miyares' firing of 30 staffers in the office after a Democratic senator said the short notice was unprofessional and caused confusion.

Youngkin sworn in as Virginia's 74th governor, pledging to 'restore power to the people'

Glenn Youngkin was sworn in on Saturday as Virginia’s 74th governor, saying he was elected to “restore trust in government, and to restore power to the people,” a mission he promised to deliver on during his inaugural address.

'What a morning!' Youngkin savors transfer of power in Richmond

The key to the Executive Mansion wasn’t quite what Gov.-elect Glenn Youngkin expected.

The bill referencing the 1858 "Lincoln-Douglas debates" in which Stephen Douglas and Abraham Lincoln went head to head on the issue of slavery mistakenly referenced Frederick Douglass,

Workers assemble a truck at the Volvo Trucks plant in Dublin.

A container is being lifted off a barge at the Port of Virginia’s Richmond Marine Terminal in South Richmond.

People lined up in Chesterfield County in February for a chance to talk to someone from the VEC about benefits.