When Dion Diamond applied for employment with the federal government, a question on the application asked if he’d ever been arrested.

“The only way I could respond was I’ve been arrested approximately 30 times,” Diamond said. “Please check with the FBI for dates and locations.”

Diamond’s arrests during the Civil Rights movement of the 1960s were for what the late Rep. John Lewis called “good trouble.”

Diamond was a Freedom Rider—a group of Civil Rights activists who rode interstate buses to protest racial segregation in the travel industry.

The 80-year-old Petersburg native was a guest speaker Wednesday afternoon at 601 Princess Anne St., as a historical marker recognizing the first stop on the Freedom Rides was unveiled in downtown Fredericksburg.

The marker notes that the Congress of Racial Equality, led by James Farmer, organized the Freedom Rides in 1961, to challenge racial segregation in interstate bus travel.

It goes on to state that after the first bus departed Washington, D.C., on May 4, 1961, the initial stop was at the Greyhound bus terminal in Fredericksburg, where riders integrated the restrooms and lunch counter without incident.

The marker also states that the riders encountered “brutal resistance and arrest” as they traveled toward New Orleans.

“It’s a wonderful day for the city of Fredericksburg and our future generations to be reminded of the selfless dedication of those folks who had the courage to get on that bus and come down here and then continue on,” Greenlaw said. “It literally changed America. It changed not just one law, but it changed the mindset and set an example.”

The collaborative effort to get the Virginia Department of Historic Resources to erect the marker began two years ago and culminated earlier this year when city officials received word that it was approved.

The city partnered with the University of Mary Washington’s James Farmer Multicultural Center to conduct research.

Christopher Williams, assistant director of the multicultural center, presided over the ceremony. Assistant professor Christine Henry, a member of UMW’s Historic Preservation faculty, also spoke, and said the marker is helping to “make a more diverse history visible on the landscape of Fredericksburg.”

Tim Roberts represented the Virginia Department of Historic Resources and gave remarks. Roberts noted that Virginia has the oldest highway marker program in the nation. It was established in 1927 but has recently seen an uptick in more diverse applications.

Roberts said 370 markers in Virginia are dedicated to Black history and 48 percent of all new markers approved fall into that category. Roberts said ceremonies like this one show that “we can make history at the same time we memorialize it.”

Fredericksburg resident and former history teacher Mayo Carter supplied the funding for the effort and received a plaque from the city. Carter said when she taught lessons about the Freedom Riders, her students were in awe that the activists signed their last will and testament before embarking on trips because of the possibility of death.

There were two U.S. Supreme Court decisions that ruled that segregated public buses were unconstitutional, but the Freedom Riders were protesting the nonenforcement of those decisions in the southern states and the federal government’s refusal to intervene.

Diamond recalled that at Parchment Prison in Mississippi, he was cellmates with Farmer, who later became a history professor. at Mary Washington

A quote from Farmer was placed outside during the ceremony that read:

“Anyone who said he wasn’t afraid during the Civil Rights movements was either a liar or without imagination. I was scared all the time. My hands didn’t shake but inside I was shaking.”

There were also photographs of the other Freedom Riders for visitors to view, and a 1962 bus that was borrowed from the Commonwealth Coach and Trolley Museum in Roanoke.

The names of the 13 original Freedom Riders were read by UMW senior American Studies major Sydney Baylor, who has worked on a Civil Rights trail project and interned with the city this past summer.

Vice Mayor Chuck Frye Jr., the lone Black representative on City Council, ribbed Diamond for his nickname “Crazy Dion,” before stating that people like Diamond are the reason he was able to become a government official.

“If you can make a difference by what someone calls ‘crazy,’ ” Frye said, “then let’s go crazy.”

'This could be our last very large surge.' But COVID isn't going away in Virginia. Here's what that will look like.

Cases have cut in half, and the last major surge might be behind us. But COVID won't disappear any time soon.

Youngkin calls for police in all Virginia schools, tapping into heated school issues to close his campaign

As many Virginia localities examine the role of police in schools, Republican Glenn Youngkin is calling on every school in the state to have a law enforcement officer on its campus, or face losing state education funding.

Ex-Liberty spokesman says he was fired for raising concerns

RICHMOND — A former spokesperson for Liberty University is suing the evangelical Virginia school after being fired, alleging in a lawsuit file…

Suspicious package was a "personal item"

A suspicious package found Friday night outside of the Federal Building and U.S. District Court in downtown Charlottesville was a "personal item," according to the city.

'This is an act of vandalism and hatred': Arthur Ashe mural in Richmond vandalized with white supremacist tags

A massive, colorful mural honoring Richmond tennis legend Arthur Ashe near the segregated courts where the young Grand Slam champ learned to play was defaced with racist graffiti Thursday, prompting outcries from the community, mayor, police and artists who made it.

Nursing homes in Virginia are cracking in the aftermath of a staffing crisis left unaddressed far before they became the epicenter of the state’s most severe coronavirus outbreaks.

Republican Glenn Youngkin poured $3.5 million more of his own money into his campaign for governor in the first three weeks of October, bringing his personal contributions to $20 million.

Virginia Health Secretary Dan Carey, the state’s top health official through the COVID-19 pandemic, will leave his post at the end of the week to work for a nonprofit health system based in Washington, D.C. 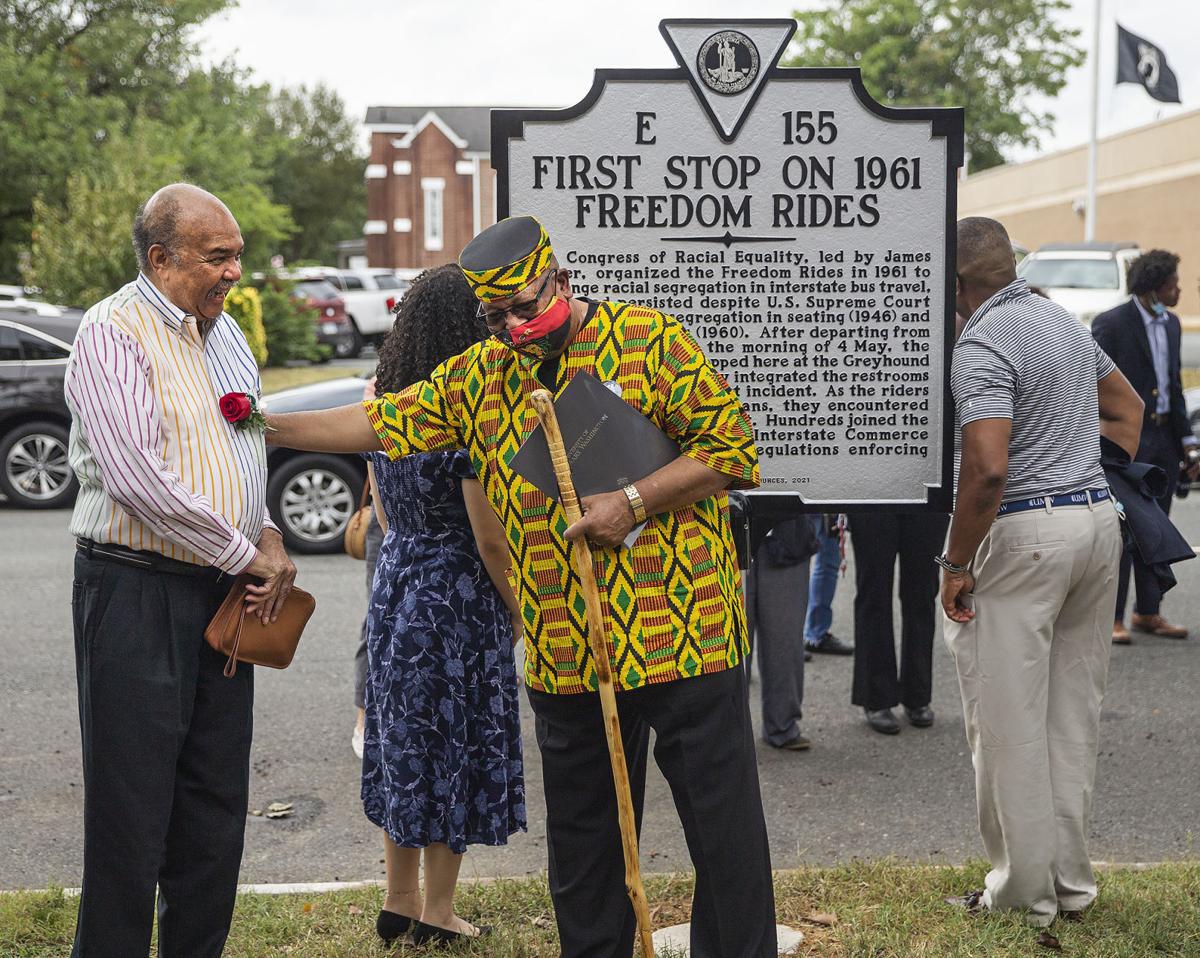 The Rev. Hashmel Turner (right), a former Fredericksburg City Councilman, pats Dion Diamond’s arm after the unveiling of a historical marker commemorating Fredericksburg as the first stop of the Freedom Rides along Princess Anne Street in downtown Fredericksburg on Wednesday. Diamond was aboard the bus which pulled into Fredericksburg on May 4, 1961. 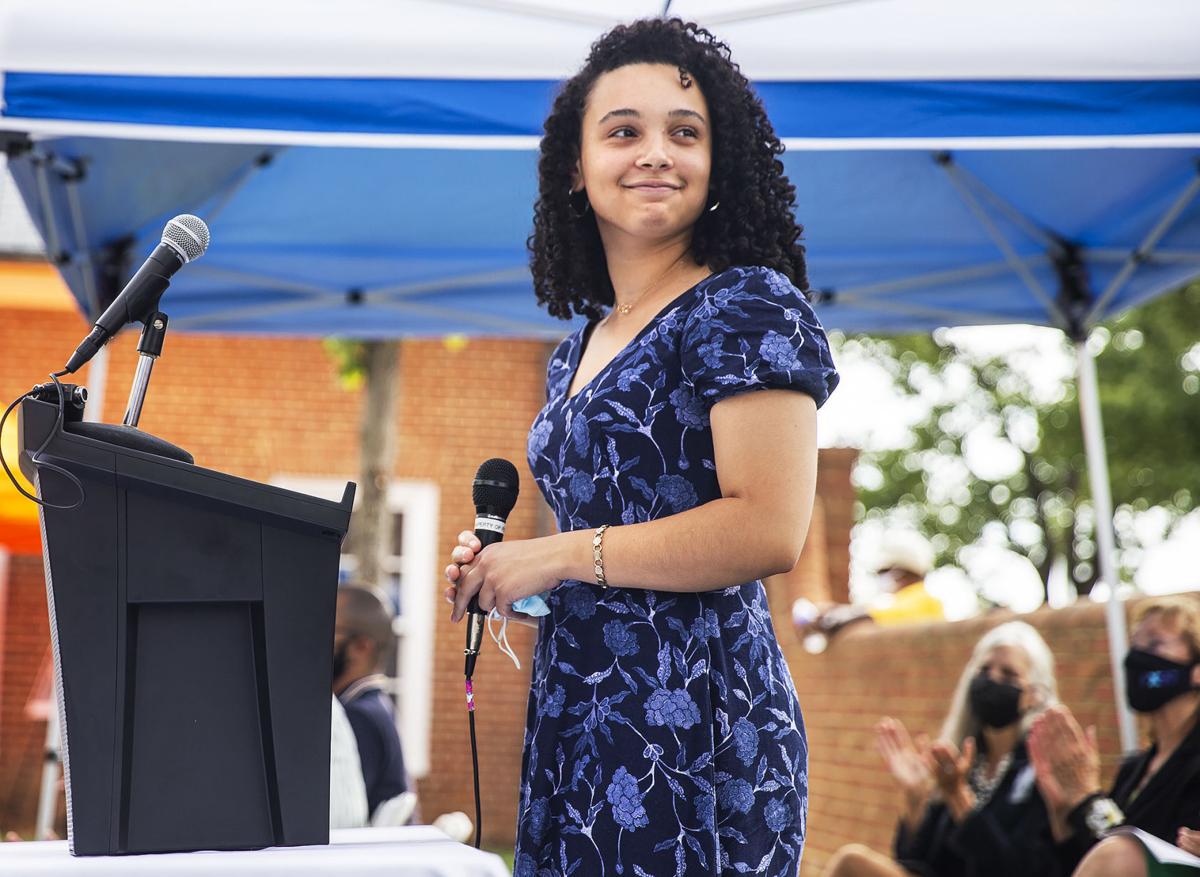 Sydney Baylor, a University of Mary Washington senior, smiles after reading the names of the original 13 Freedom Riders during a historical marker unveiling along Princess Anne Street in Fredericksburg on Wednesday . The names were of those who rode the bus to Fredericksburg on May 4, 2021. Baylor was one of two interns on Civil Rights Trail project this spring. 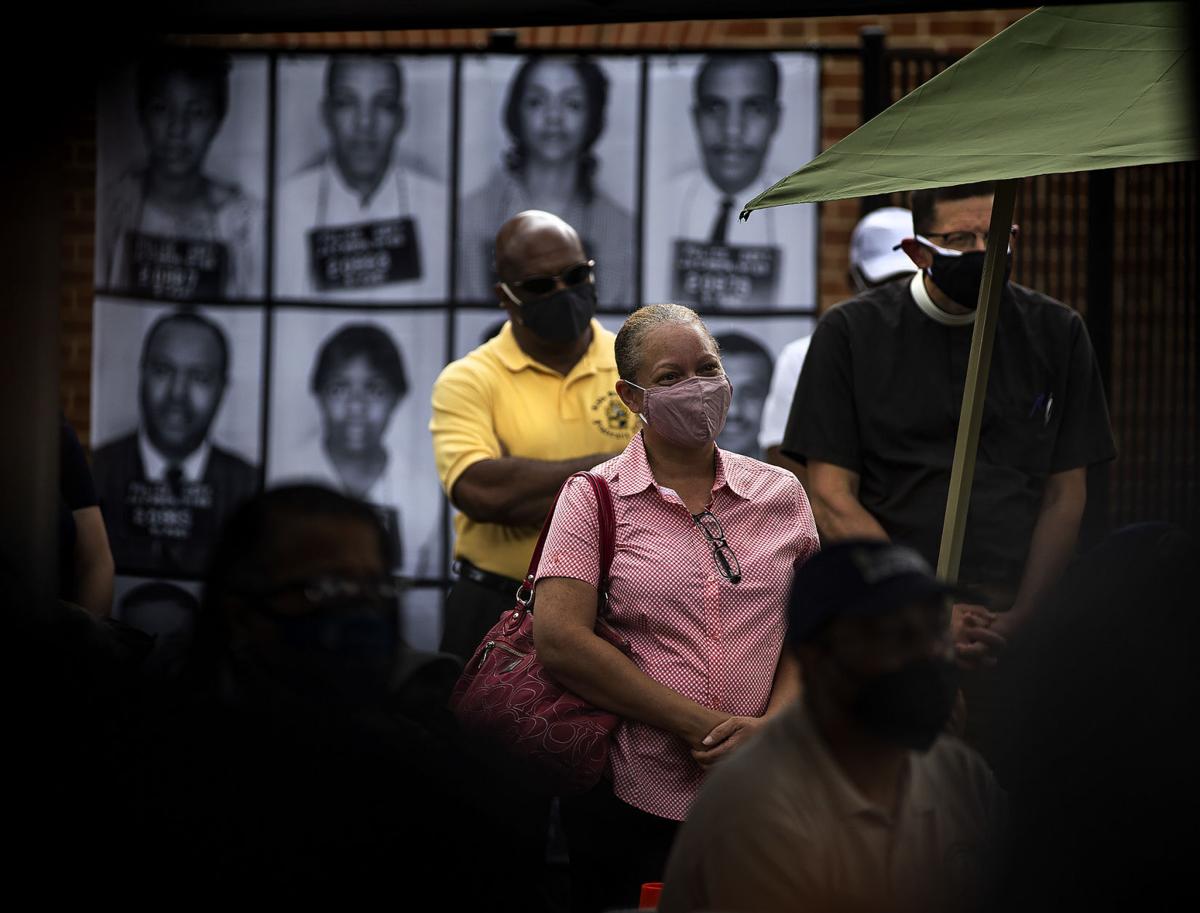 Attendees of the unveiling of a historical marker commemorating the Freedom Riders’ first stop in Fredericksburg listen to speakers at the event along Princess Anne Street in downtown Fredericksburg on Wednesday. Behind them is a poster displaying the riders’ police mugshots. 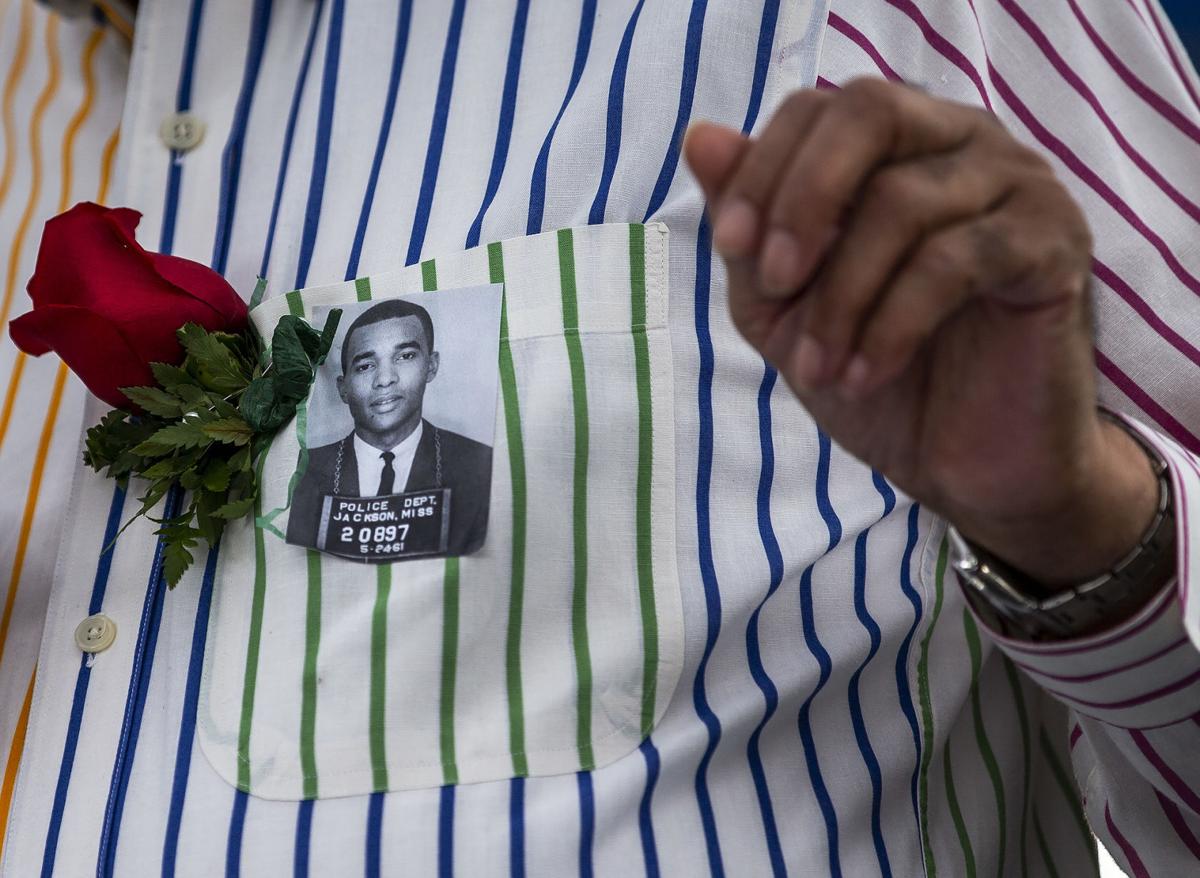