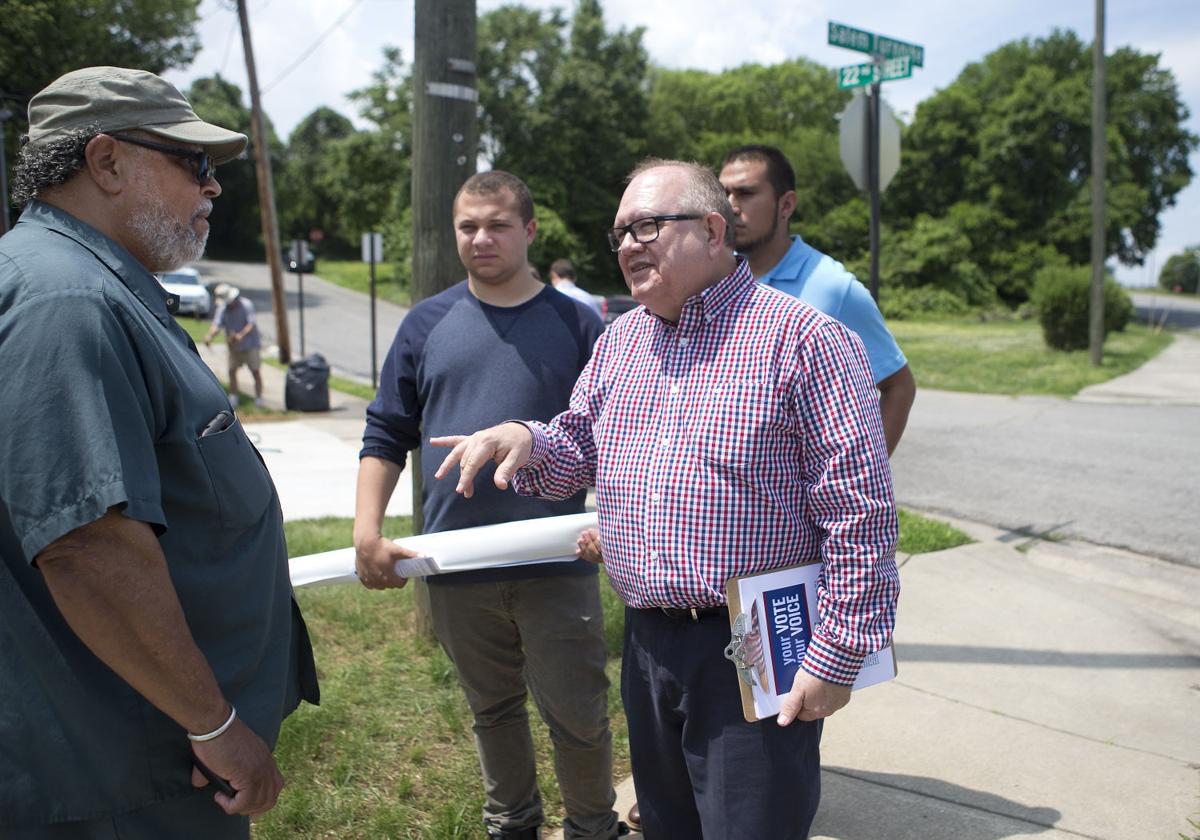 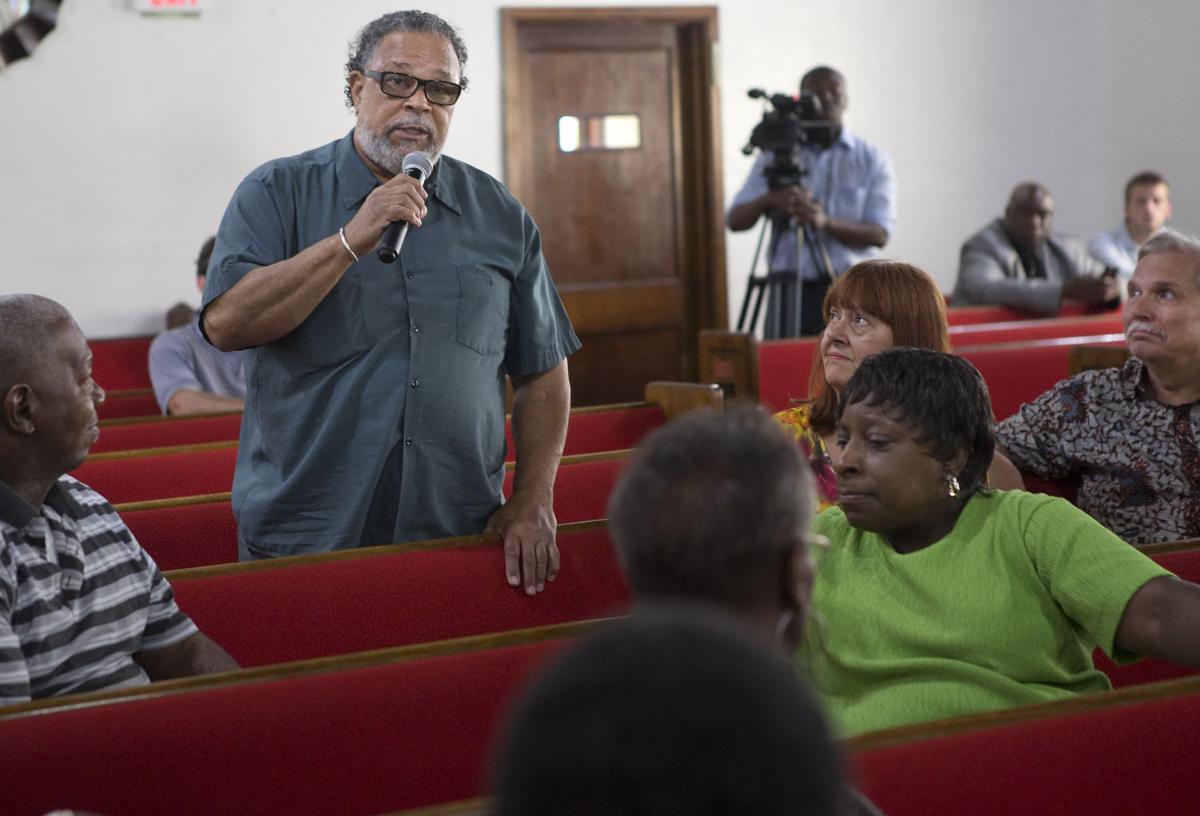 Alvin Crutchfield of Roanoke speaks about his experience not being able to vote as a felon during a Voices for the Vote Rally at Mount Zion A.M.E. Church on Saturday, June 4, 2016. "This is the one thing that means a lot to me. To feel like a full fledged citizen again," Crutchfield said on the right to vote.

Standing in a church sanctuary Saturday morning, Alvin Crutchfield described how he felt when he learned he could once again vote in Virginia.

"Hallelujah," he said. "... I've been praying to have my rights restored."

Crutchfield, 64, of Roanoke, is among an estimated 206,000 ex-offenders whose rights were restored under a sweeping executive order signed in April by Gov. Terry McAuliffe.

The order, which is being challenged in court, has spurred a heated political debate and drew new scrutiny last week as prosecutors discovered errors in the list of names compiled by McAuliffe's administration.

Botetourt County Commonwealth's Attorney Joel Branscom found the state was listing three people linked to a violent Roanoke Valley gang who are all still in federal prison as having had their rights restored.

Similar mistakes were found by prosecutors in Loudoun and Fauquier counties.

Republican leaders pointed to the discoveries as evidence the executive order was rushed through without due diligence.

"I'm frankly stunned at what we've learned. It's incredibly reckless," said House Speaker Bill Howell, one of the plaintiffs in the GOP-led lawsuit challenging the governor's authority to issue a mass rights restoration order.

The governor's office said some issues are bound to arise in a large undertaking that involved compiling over 17 million pieces of state data.

Spokesman Brian Coy said work to refine the list continues and described critics as seizing on technical problems to undermine the initiative.

Coy said he wasn't aware of anyone trying to register to vote after erroneously appearing on the state list.

On Saturday, supporters of the rights restoration order held a trio of rallies across the state, including one at Mt. Zion AME Roanoke Church attended by about 50 people.

"I'm happy and I'm honored to be part of working to get as many of these ex-offenders registered to vote as possible," said Eddie Seay of the group Your Vote, Your Voice, which followed the local rally with a voter registration canvas.

"People shouldn't be punished forever and ever and ever for a mistake they made in the past. They paid that debt."

Crutchfield, who also spoke at the rally, said he's been unable to vote in Virginia since 1975 when he was convicted on drug possession and distribution charges.

"I've been a law-abiding citizen for almost 40 years," he said, adding after his release he lived for awhile in North Carolina, which automatically restores rights to those who've completed their sentence and probation or parole.

When he returned to Virginia, he was surprised to discover he couldn't vote. Rights restoration requests made through the application process previously used by Virginia's governors were denied, he said, because he still had unpaid court fees that, with interest, now total more than $8,000.

"I work hard, but I don't have $8,000," said Crutchfield, a heating and air technician. "But I would love to have my rights back ... I just don't feel whole in the community."

The requirement that court costs be paid was dropped from the restoration process by McAuliffe last year and isn't part of the criteria for the executive order -- a point that drew criticism from those who feel court costs and restitution should be paid first.

The initial executive order automatically restored the right to vote, serve on juries and run for public office to all felons who had served their sentence and completed any supervised probation or parole as of April 22.

McAuliffe intends to keep signing orders to cover those who meet the criteria after that point. A second order he signed Tuesday added an estimated 1,200 people.

The governor's administration has refused requests to release the list of names it's assembled to date as part of the initiative.

Officials said the information would be in an annual report made to the General Assembly next year. But Republican lawmakers said it should be released now so others can check its accuracy.

The list was used to create an online database where a person's status can be checked using their name, date of birth and social security number.

The prosecutors discovered the mistakes reported by entering information from past cases. Branscom said he found errors during only about 20 minutes of searching.

"I'm afraid to think of what it looks like on a large scale around the commonwealth," he said. "I just looked at a small sampling."

The lapses included listing the names of three people linked to the Goonz, a local gang that in the words of one federal prosecutor was turning home invasions into a "cottage industry."

The people, sentenced in 2011, are all still serving time in out-of-state federal prisons, according to online federal inmate information.

Coy said the state data didn't initially account for inmates who'd been moved out of Virginia. Officials are working to correct errors and remove ineligible people, he said.

Being listed in the state database alone doesn't make it legal to register to vote if you don't meet the criteria spelled out in the executive order, he said

Branscom said the errors raised questions about how the order is being enacted, and he wished stakeholders had been allowed more input into the process.

"It would have been nice to look at this before we did it," he said, "instead of putting our fingers into the leaks afterward."

Alvin Crutchfield of Roanoke speaks about his experience not being able to vote as a felon during a Voices for the Vote Rally at Mount Zion A.M.E. Church on Saturday, June 4, 2016. "This is the one thing that means a lot to me. To feel like a full fledged citizen again," Crutchfield said on the right to vote.