On the way home from a weekend road trip to the Smoky Mountains, two friends, Lindsy Wolke and Megan Grant, found themselves browsing the relic room of Smoky Mountain Knife Works in eastern Tennessee.

Among the fossils and old currency, they stumbled upon a few handwritten letters from World War II. The love letters, written from 1944 to 1946, were so absorbing - and the two friends stood there reading them for so long - that an employee came by and joined them, becoming equally enthralled.

"We were sitting there for what felt like forever," said Grant, 24, of Clarksville, Tennessee. "But we couldn't read them fast enough."

Wolke and Grant purchased all 21 letters, at $4 a piece, and hurried to the car to continue reading the love story of Elias Maxwell and Ilaine Murray. At the time, Elias, 18, was stationed in Hawaii and Japan on the USS Rankin, and Ilaine, 19, was back in their hometown of Blackwood, New Jersey, about 15 miles from Philadelphia.

"The notes were just so beautifully written," said Wolke, 24, who also lives in Clarksville. "Reading them just made your heart melt. It was like reading a book."

"It was way better than any book I've ever read," Grant said.

The missives, each several pages long, were filled with depictions of life at war and on the home front, and the two young letter writers clearly had great affection for each other.

"To my Sweetheart in the Navy," Ilaine began one letter. "Hi ya honey. How are you? I received two letters today from you hon and you can just imagine how good I feel." She signed off with lines of X's for kisses and wrote: "All of these and millions more."

In another letter, Elias wrote to Ilaine: "The time now is 18:50 p.m. I've been exactly 30 minutes writing this letter so far," and he asks her if she likes the pillowcase he sent her from Geneva. He ended with, "Well, honey, I guess I'll close for now, this is your Navy Sweetheart saying: So long & God Bless. Yours Forever. P.S. Please think of me while I am away."

The ending to the love story, however, was missing.

Wolke and Grant became so invested in the lives of Ilaine and Elias that they wanted to know what happened. Did they get married and live happily together? Was Elias killed at war? Did one of them fall in love with someone else? Grant and Wolke couldn't get it out of their minds.

So they turned to an ancestry website to try to find the couple.

Wolke and Grant were delighted to learn that, after the war, the young lovebirds had indeed married and had four children. But they also learned Elias and Ilaine passed away years ago.

Wolke did some sleuthing and found two of their children on Facebook. She sent them messages but neither replied.

Undeterred, she then posted a photo of the letters on Weird Secondhand Finds that Just Need to Be Shared, a Facebook group dedicated to unique and odd items found while thrifting. The group has more than a million members, and Wolke's post amassed thousands of likes and comments. It also caught the eye of a friend of one of Elias and Ilaine's children.

Barbara Murray, 65, of Clementon, New Jersey, one of the Maxwell children, had seen Wolke's message about the letters but dismissed it as spam. It wasn't until a friend sent Wolke's post from the Facebook group that Murray allowed herself to consider it could be real.

The sight of her mother's handwriting on the envelopes left her "literally shaking," she said.

After messaging back-and-forth, Wolke reached Murray on the phone - a call that lasted nearly two hours.

"It was like an instant bond," Murray said. "I can't explain it."

After the war, her parents married in 1948 and started a family, she said. They worked at a stocking mill together. Then, Elias went on to work as a machinist for Pennwalt and Ilaine went to work in a sweater mill.

Elias died in 1993, and Ilaine moved to a nursing home in 2010, which is when their house in Clementon, New Jersey - not far from their hometown of Blackwood - went into liquidation, and the bank sold much of her parents' possessions, Murray said.

Murray had one letter saved from her parents' wartime correspondence, but neither she nor her siblings knew there were more of their parents' historic love dispatches. That's why they were in such shock that the letters turned up for sale years later, several states away.

Murray said she was extremely moved that the two young women found them and were so determined to track her down.

"There really are nice people still left in the world," Murray said.

After the phone conversation, Wolke and Grant knew they needed to reunite the letters with the Maxwell family but couldn't imagine anyone else making the delivery from Tennessee to New Jersey.

"We had such an attachment to these letters. We just loved them so much," Wolke said. "I didn't trust the mail service to take them up there and keep them safe."

On Oct. 4, a month after their incredible discovery, Wolke and Grant jumped in Grant's Toyota Camry and drove 800 miles, overnighting in Washington, to return all 21 letters to their rightful owners.

The four Maxwell siblings and their new friends from Tennessee met at a restaurant in New Jersey on Oct. 6. There was laughter and a few tears, before the siblings took Wolke and Grant on a tour of Elias and Ilaine's hometown. Wolke and Grant wanted to see all the places mentioned in the letters and to hear more about the couple they'd grown so fond of.

They visited the land that once belonged to Ilaine's family and the location of Elias's childhood home. They found out that Ilaine and Elias met as kids and saw where the two would walk together to school.

They heard stories about how Ilaine was shy and reserved, while Elias was outgoing. They were invited to take a look around the Maxwell family home. Several years after the bank took possession of it, Murray's daughter purchased it back. It's where the Maxwell children grew up - the same home where Elias would put a board out on the back patio for tap dancing. ("He tap danced at all our weddings. He was a bit of a character," Murray said.)

"Standing on that land and knowing Elias and Ilaine walked there, together, we felt a connection, like we were there with them," Wolke said. "And being in the house they built and raised a family in, it was just incredible."

Grant added, "We felt like we knew Ilaine and Elias, even before they had kids or got married. We just felt like we were meant to be there [in Blackwood]."

Leaving the letters in New Jersey was bittersweet for Wolke and Grant, but ultimately, the perfect ending to this story.

"I was just so happy these letters were wanted," Wolke said. "They weren't discarded. They were just lost from this family. They didn't even know the letters existed."

Murray said she was grateful to experience her parents' young love in their own words.

"To have a piece of my parents - just to see what their life was like when they were young and in love," she said.

Murray took a moment to imagine how her parents would have reacted to this story of two strangers unearthing their heartfelt and personal letters.

"I think my mother would probably blush some," Murray said. "My dad would be like, 'Wow! This is great!' He might even do a little tap dance." 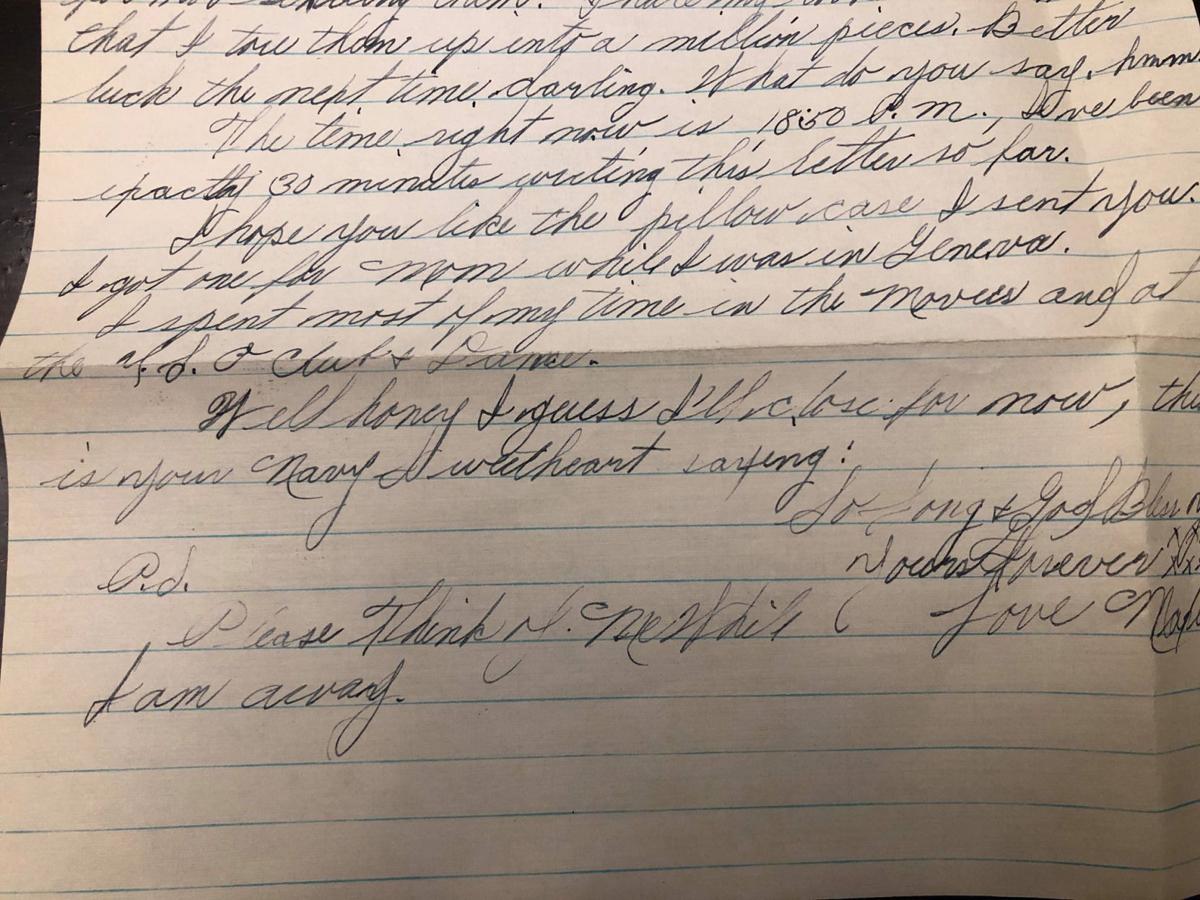 World War II love letters were found in a secondhand shop in Tennessee. 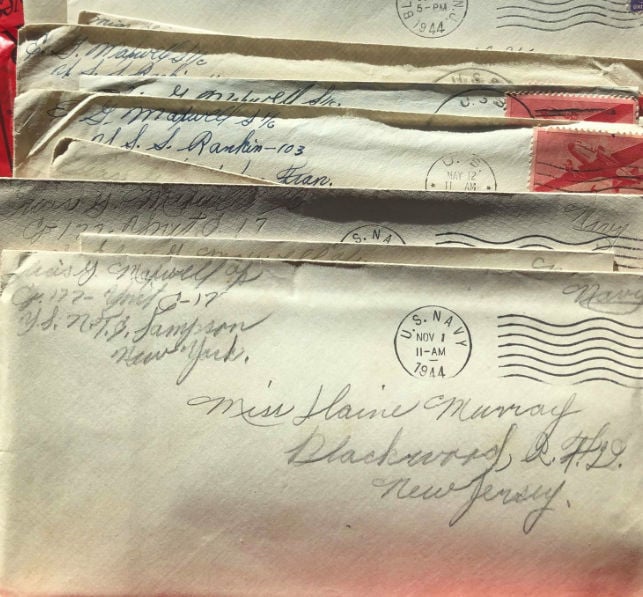 This stack of World War II love letters was found in a secondhand shop in Tennessee.