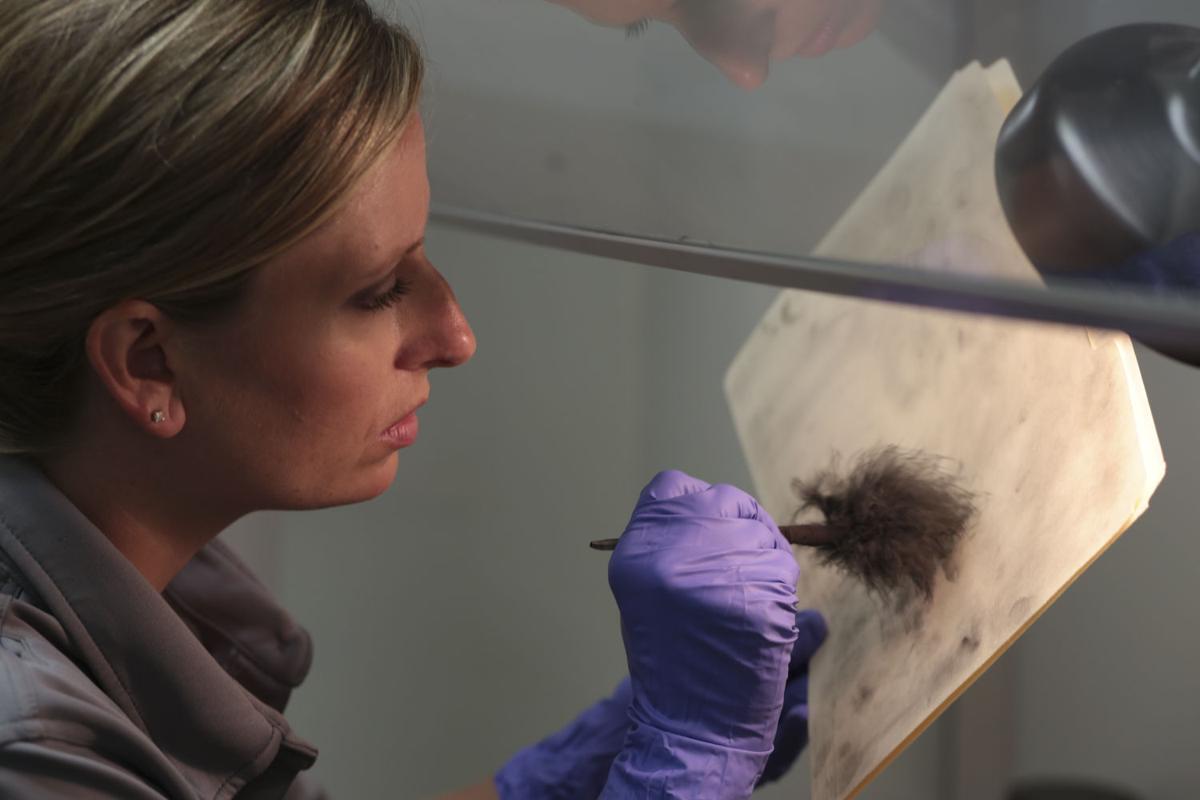 Keisha Saul, a Roanoke County crime scene investigator, demonstrates how investigators dust for prints. Lack of evidence, even when a suspect has been identified, can hinder prosecution. 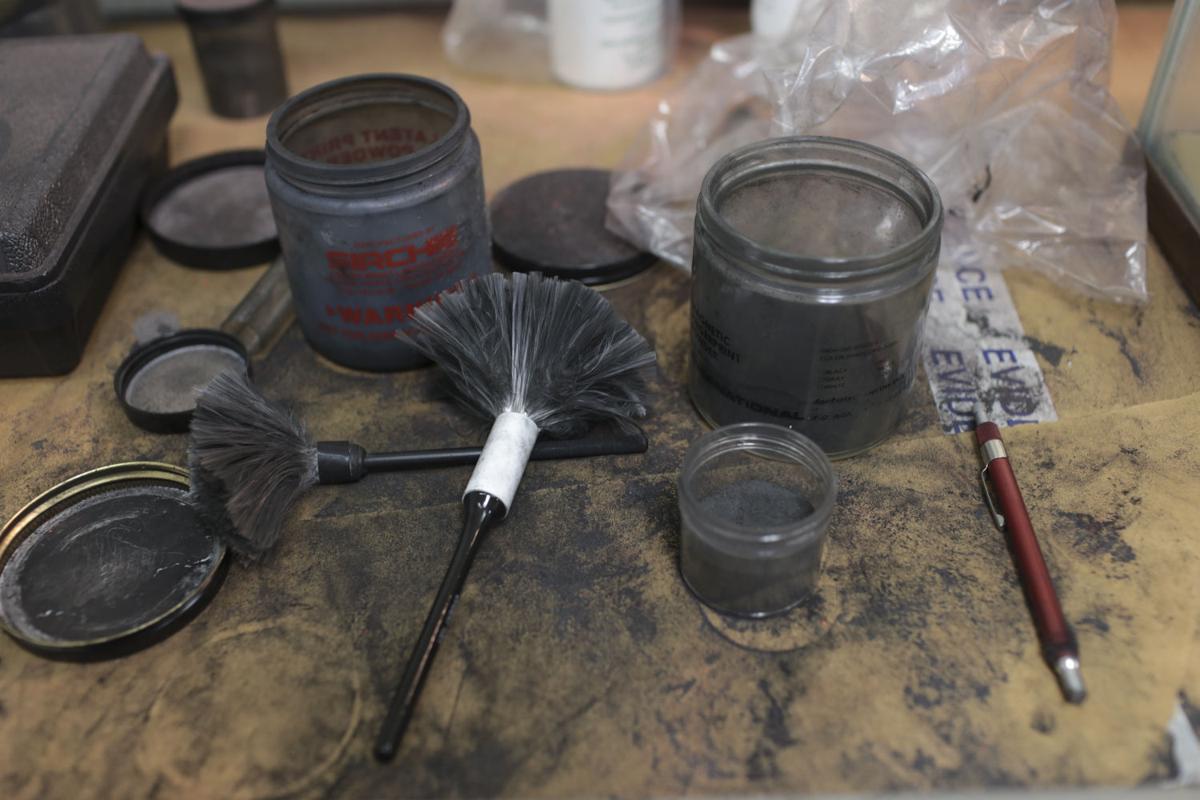 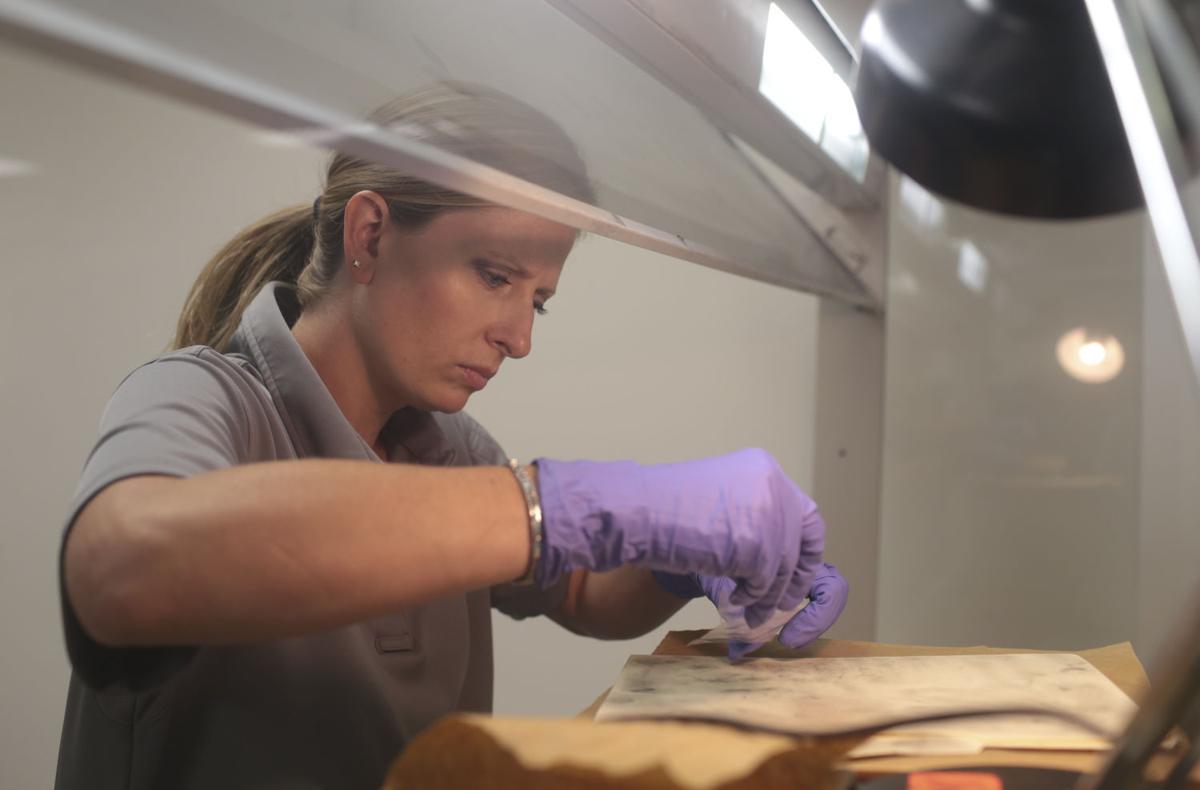 Since Delmar Lane Bush’s death on May 28, 1998, Roanoke County police have been unable to find the person who killed the 69-year-old man.

Bush appeared to have had no enemies before he was shot in the head inside his rented home on Mount Pleasant Boulevard. Bush’s medical conditions — congestive heart failure and emphysema, among others — kept him inside most of his time, watching NASCAR or “Judge Judy.”

Recently, police submitted evidence for DNA testing in hopes of solving the nearly 17-year-old crime. But without witnesses, Criminal Investigations Division Commander David McMillan said the case may remain one of the county’s uncleared homicides.

Police consider a crime to be cleared when investigators and prosecutors have arrested and charged a suspect. Occasionally, homicides are cleared by so-called “exceptional means” — such as when a suspect dies or otherwise can’t be arrested, according to the Federal Bureau of Investigation. While violent crime decreased 14.5 percent nationally between 2004 and 2013, the FBI’s Uniform Crime Report indicates about one in three homicides are not cleared within a single year. In 2013, the latest year for which the FBI has statistics, 64.1 percent of homicides nationally were cleared. Almost 50 years earlier, police cleared 91 percent of homicides.

Locally, clearance rates for 2013 exceed both the national rate and the 57.5 percent average achieved by cities in a similar population group. For Roanoke and Roanoke County, officials estimate the clearance rate to be about 79 percent. Salem police say they do not have any unsolved homicides.

But because clearance rates are based on crimes that occur and are solved within the same calendar year, the rates can vary wildly for local jurisdictions that see few such crimes.

In 2004, Roanoke’s clearance rate was 71 percent (five out of seven homicides were cleared in the same year). Ten years later, in 2014, it was 33 percent (one out of three). Roanoke averaged a 73 percent clearance rate between those years.

When cases do go unsolved, lack of evidence, cooperation and resources can hinder officers’ efforts. Those cases leave loved ones without closure and leave perpetrators unpunished.

“There are homicide cases that we know the potential suspect,” said Roanoke Police Deputy Chief Monti Lee. “We just can’t get people to come forward and share that information with us.”

Changes in society and in crime

Between 2004 and 2014, Lee said Roanoke police cleared 76 out of 97 homicides. The 21 remaining cases largely share the same hindrance: lack of cooperation from potential witnesses.

“One burden that you face as a detective working not just homicides, but violent crime, is getting cooperative witnesses,” Lee said. “If you have somebody that gets murdered during a drug transaction, even if people are there that are witnesses to it that weren’t involved in it, they’re potentially less likely to come forward.”

“It was a simpler time,” Burke said. “If you knew the victim, you knew the suspect. With the mobile factor, it’s so easy to pick up and go.” The majority of Roanoke and Roanoke County crimes are not stranger-on-stranger, contributing to higher local clearance rates.

In some cases, police find it difficult to locate suspects because the perpetrator hasn’t had previous contact with law enforcement.

“Sometimes a homicide is a one-shot deal,” Burke said. “That person bothered me, I got rid of that person, now I don’t have any problems.”

When the victim lives in isolation — with few family or friends — solving the case can be even more difficult, Lee said.

“There’s people that don’t have the same support system around them. It makes it hard to know where to start,” Lee said. “They may have a transient lifestyle or a lifestyle that makes it difficult to know what they would normally do.”

“Even the simplest of homicide cases is complicated. Juries think ‘CSI’ cases are real and that cases can be solved like TV,” Burke said. “When police don’t have all the fancy stuff being brought forward, prosecutors may be hesitant, knowing that juries want more.”

An increasing number of police departments also solve homicides with fewer resources and officers, Burke said. “You need to be able to put money and manpower into solving crimes,” Burke said. “Most police agencies are small departments. You’re more likely to have Mayberry than to have NYPD.”

Though the clearance rates provided by the FBI provide law enforcement with information about trends, the data is not comprehensive.

Some jurisdictions allow agencies to choose whether to submit the data, meaning some crimes may be underreported. In Virginia, departments are required to submit yearly crime statistics to Virginia State Police, who in turn send that data to the FBI.

However, reported numbers in Virginia may not fully reflect a department’s efforts, McMillan said. In Roanoke County, for instance, police are handling two death investigations in the same manner as homicides, even though they haven’t been classified that way: the 2013 death of Charles Kenneth “Kenny” Perdue and the 2010 disappearance of Joan Cook.

Officials discovered Perdue’s body on Rutrough Road on Sept. 23, 2013. A medical examiner later declared Perdue had been hit by a car, but police believe he was hit on another street and moved. McMillan said the death investigation has not been deemed a homicide because medical examiners are not required to classify vehicular deaths as homicides.

Joan Cook was a Salem woman who disappeared on Jan. 24, 2010. Although her body has never been found, McMillan said that all missing persons cases are treated similarly to homicides since a 20-year-old Virginia Tech student vanished after a rock concert in Charlottesville in October 2009.

“Ever since Morgan Harrington disappeared, there’s awareness in the law enforcement community that a missing person may be a homicide,” McMillan said.

In both cases, McMillan said a lack of witnesses and few leads have frustrated investigators.

Other cases — such as Cary Mitchener’s April 15, 2013, death in Roanoke — can affect statistics because the cause of death is difficult to determine. Mitchener, 56, was found inside her Stanley Avenue home with a bag over her head and her arms and legs bound. Police have not determined whether her death was a homicide or a suicide.

The way the clearance rate is calculated can also overlook homicides cleared after the year in which they were committed. Though the FBI documents how many total cases a department clears in a year, it only includes homicides solved in the same calendar year when calculating the department’s annual clearance rate. So if a homicide was reported in December 2013 and solved in January 2014, it wouldn’t have been counted as cleared when 2013 rates were calculated.

Both Roanoke and Roanoke County police hope efforts to provide resources to violence-stricken communities will improve communication with citizens and help prevent homicides.

Lee said Roanoke police have seen some success from the Drug Market Initiative, which reaches out to nonviolent drug offenders and provides educational and job training opportunities as long as they refrain from dealing drugs.

“We’ve had two DMI programs — in Hurt Park and in Melrose Park,” Lee said. “It’s been very beneficial, for us and the community too.”

Lee said anyone with more information about any unsolved case should contact the Roanoke Valley Crime Line at 344-8500.

“We want you to come forward and help us out,” he said. “We’re not judging you for anything that you may have been doing during the time period when someone may have been murdered.”

Following are several recent homicides that remain unsolved in Roanoke and Roanoke County. Anyone with information should contact the Roanoke Valley Crime Line at 344-8500. The Roanoke County Police Department can also be reached at 777-8601, and Roanoke police at 853-2212.

Amazon appears to have votes to block union effort

Amazon appears to have votes to block union effort

Police arrested Ronnie Clayton Thomas and are looking for Timothy Price Jr. in the killing of Tushawn Wray Drew.

Keisha Saul, a Roanoke County crime scene investigator, demonstrates how investigators dust for prints. Lack of evidence, even when a suspect has been identified, can hinder prosecution.