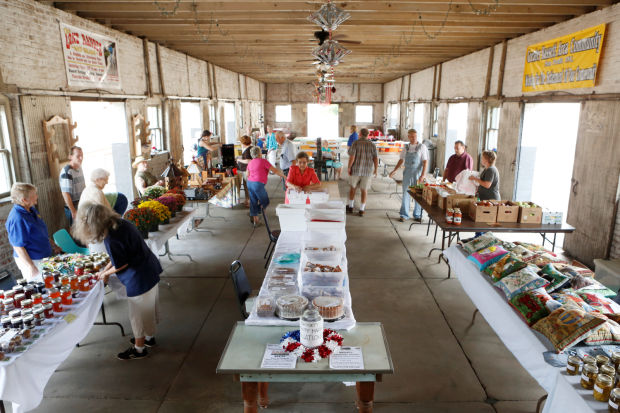 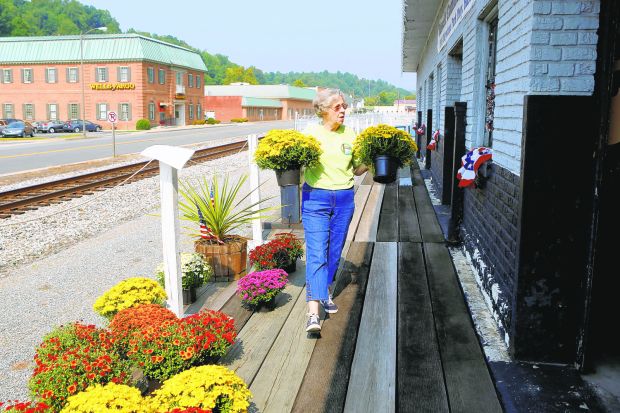 JOEL HAWKSLEY | The Roanoke Times;Jane Eggleston carries pots of flowers for a customer at the Bassett Community Market on Thursday. This weekend’s festival will give many former factory workers a chance to reunite and reconnect. 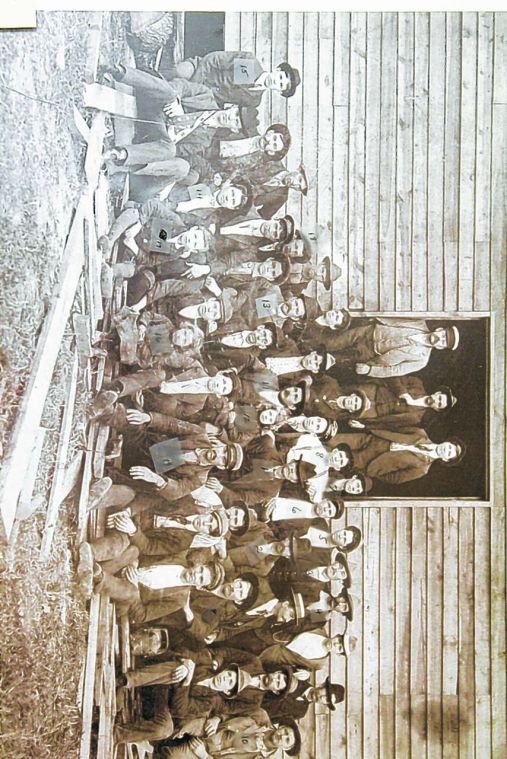 Courtesy Bassett Historical Center; Workers gathered for a group picture in 1902 at the original Bassett Furniture Company’s first factory, still referred to as Old Town by locals. The company still has a corporate office in Bassett and an assembly plant in Martinsville, but most of its products are now made in Asia.

By Beth Macy | The Roanoke Times

BASSETT — Organizers of Saturday’s 20th annual Bassett Heritage Festival had the bands hired and the details plotted out: For the first time, the festival would be held on land where the first Bassett Furniture Industries factory once stood, back when it was this small unincorporated town’s reason for being.

Old-timers still call that 1902 plant “Old Town,” even though it closed in 1989, the first Bassett factory to fall as imports from Asia decimated Southern furniture- and textile-making, wiping out almost half of the jobs in Martinsville and Henry County alone.

The festival recalls that furniture-making heritage and is a chance for the retirees and displaced workers who make up most of Bassett’s dwindling population to gather, and ex-pats too. Supporters also aim to show visitors and prospective businesses that there is life after globalization — life after all the factories that once stitched this small factory town together.

But this year came a glitch: Someone stole the trailer containing all the cookers used to make the festival’s signature pancake breakfast, some $6,000 worth of grills, pancake mix and equipment.

“It was the weekend of the Hillsville” flea market, said Betty Scott, one of the Stanleytown Ruritan Club leaders who heads festival planning. She believes someone with a truck hitch snagged the unmarked trailer from the parking lot of the Stanleytown United Methodist Church and drove off with the intention of selling it — and more — at the flea market.

Theft and property crimes have paralleled the climbing unemployment rate in the region, the highest in Virginia for nearly the entire past decade. The J.D. Bassett plant, in fact, was set on fire in 2011 by a man attempting to steal copper wiring to sell, and last year the Bassett Family Cemetery was pilfered by thieves stealing metal adornments from the furniture founders’ marble mausoleum.

But as Scott and other community leaders eager to revive the dying town point out, hope and elbow grease can turn things around. An article about the trailer theft in the Martinsville Bulletin unleashed a host of calls from people and organizations eager to step in with loaner grills and supplies.

The show at Old Town will indeed carry on, starting with pancakes at 7 Saturday morning, followed by music, more food and entertainment, and class reunion activities for graduates of the old John D. Bassett High. History displays in the old train depot will spotlight life in the former factory town, once home to the largest furniture-making operation in the world.

How does a town one-third its former size carry on? Barber Coy Young opens his shop most mornings at 5:30 a.m. so people commuting outside the county to their jobs — which roughly half the work force does now — can get their haircuts en route to work.

On Thursdays from May to October, musicians play at a weekly farmer’s market, where women sell pickles, plants and fried pies in the old train depot. The market’s coordinated by volunteer Ruby Dillon Davis, who’s a Bassett founder descendant, and her husband, Matt.

To power the town’s streetlights, which used to be provided by Bassett Furniture, volunteers now pitch in, pooling resources to gather $720 per streetlight per year. They also make sure the grass along the Fairystone Highway main drag gets cut.

Retirees gather to walk at the old John D. Bassett High School, now a medical-records storage facility called Eastern Microfilm Imaging, operated by graduate David Wright (class of 1960), who regularly opens the gym up for exercise and serves free food that he often prepares himself. Wright also runs food and clothes banks from the building.

Across the street from EMI, people congregate to talk and do genealogy research at the Bassett Historical Center, which is next to the Smith River that bisects the town.

At the heritage festival, former factory workers gather who haven’t seen each other in years — or at least since the last festival.

“The social fabric does break down” with the closing of factories, said Pat Ross, the historical center’s volunteer director. “The festival is like old home week for so many people because the only place they used to see each other was when they went to work. And there’s no place to shop anymore in town.”

Betty Scott said she’d hoped one of the abandoned factories would be converted to apartments. She said she asked a Bassett Furniture manager about the possibility of turning one of its properties into a furniture museum. “And they hooted me out of the room,” she said. “I was laughed at, so I never did pursue it.

The Greater Bassett Area Community group reached out recently to the Virginia Department of Transportation, which removed a third of the unfriendly “NO PARKING” signs downtown that were erected decades ago, back when traffic was a challenge. VDOT also initiated street sweeping again in Bassett in preparation for the festival.

The group has become the de facto town council of sorts, taking over things the furniture company used to do.

“Many years ago, Jane Bassett Spilman had everything painted and mowed,” Scott said, referring to the woman whose father and husband ran the company and whose son, Rob Spilman, is now CEO.

With the factories in Bassett all closed, fourth-generation furniture heirs running the company now aren’t as involved with the town as their forebears were, residents say. Bassett Furniture still has a corporate office in Bassett and an assembly factory, called Plant No. 11, in Martinsville, as well as an upholstery factory in Newton, N.C.

While the company still employs 267 in Henry County and Martinsville, 449 at the Newton factory and 750 in its growing, 89-store Bassett Home Furnishings retail operation, most of the wood furniture that used to be made in Bassett is now produced in China, Indonesia and Vietnam.

The company does help sponsor the heritage festival, having donated not just the grassy area where Old Town stood but also providing children’s activities, utilities and trash collection for the festival, according to Jeb Bassett, the senior vice president whose grandfather was also a CEO.

He’s co-chair of a group of regional leaders, named the Small Town Collaborative, that aims to capitalize on the “pearls” of being situated along the Smith. The group is working to connect two sections of a riverside trail from Fieldale to north Bassett, possibly naming it the Furniture Heritage Trail, he said.

The grass-planting that followed the 2009 razing of Old Town was well-received, Bassett said, adding: “It’s not a strong motivator when you come to work every morning and look at empty factories. At least now we have a nice green field, and we’re open, as far as what we can do with those.”

He envisions some of the abandoned storefronts turning into shops where visitors can rent bikes and kayaks, and points out that tourists already venture to Bassett to fish for trout along the Smith, some renting out cottages that were originally built as company homes.

The Smith River was key in the development of Bassett Furniture, he noted, with its waters used to generate steam power for the factories and the town. Old photographs at the Bassett Historical Center show early Bassett sawmill crews using the Smith to float logs that would be turned into railroad ties, and later, after the company was formed and the sawyers became furniture-makers, into dressers and beds.

“It’s not our job to keep the town going, but we want to be a good community steward and would like to do our share,” Bassett added. “In my heart, I hope to see a small, clean town with character and heritage that’s a destination.

“We’d like people to have a reason to pass through the area and stop in Bassett,” he said, adding that a furniture museum is a possibility, though there are no formal plans.

RICHMOND, Va. (AP) — A former University of Virginia lacrosse player’s efforts to get released early from his 25-year sentence in the 2010 sla…

Man found shot to death in Durham was a homicide suspect

DURHAM, N.C. (AP) — A man found shot to death inside a car in a Durham, North Carolina, elementary school parking lot has been identified as a…

NORFOLK, Va. (AP) — A woman’s death in an August house fire is now being investigated as a homicide by Norfolk Police and the Fire Marshal’s O…

JOEL HAWKSLEY | The Roanoke Times;Jane Eggleston carries pots of flowers for a customer at the Bassett Community Market on Thursday. This weekend’s festival will give many former factory workers a chance to reunite and reconnect.

Courtesy Bassett Historical Center; Workers gathered for a group picture in 1902 at the original Bassett Furniture Company’s first factory, still referred to as Old Town by locals. The company still has a corporate office in Bassett and an assembly plant in Martinsville, but most of its products are now made in Asia.