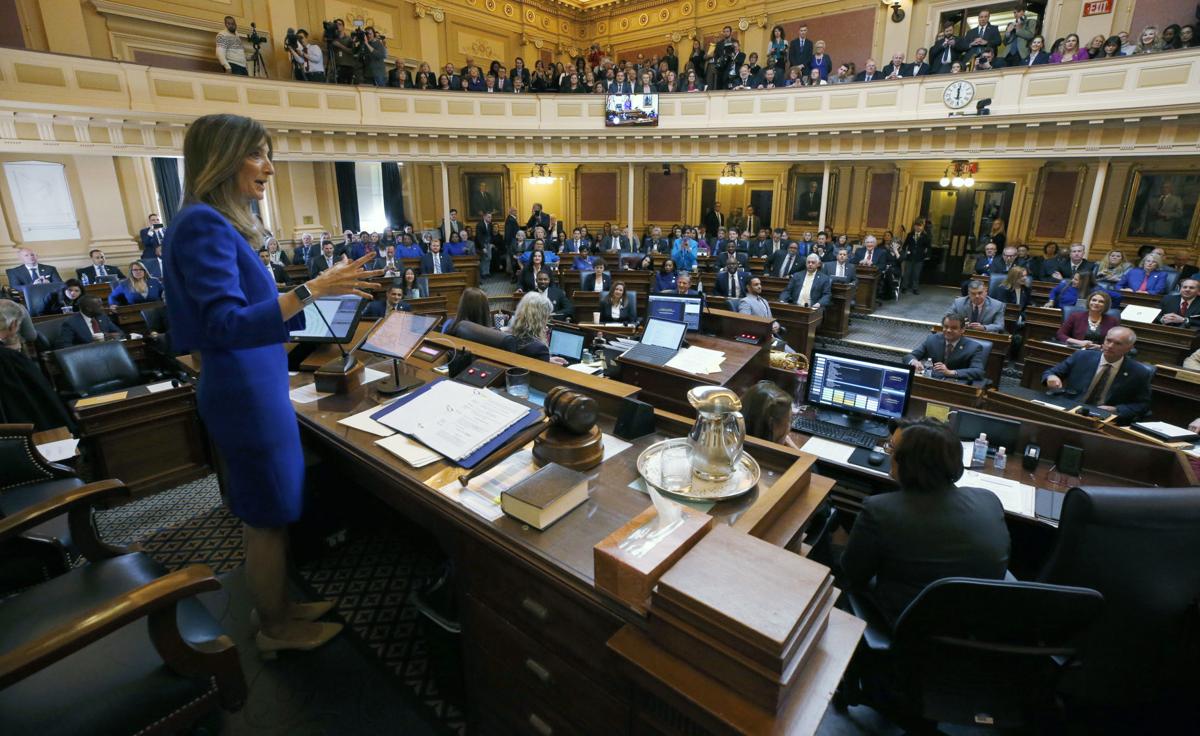 New House Speaker Eileen Filler-Corn, D-Fairfax, addresses members Wednesday after being sworn in at the Virginia State Capitol. She is the first woman to be elected speaker of the House of Delegates. 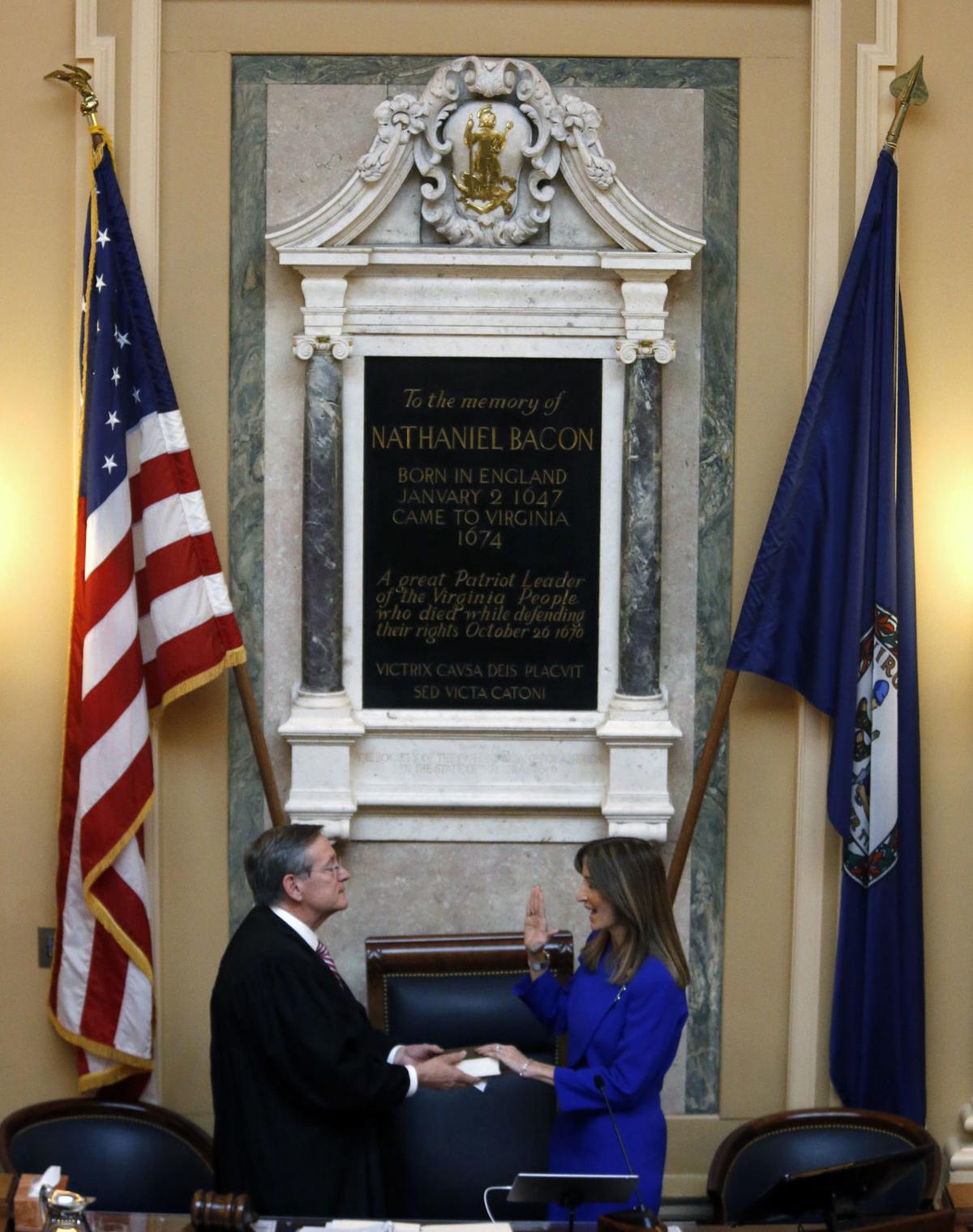 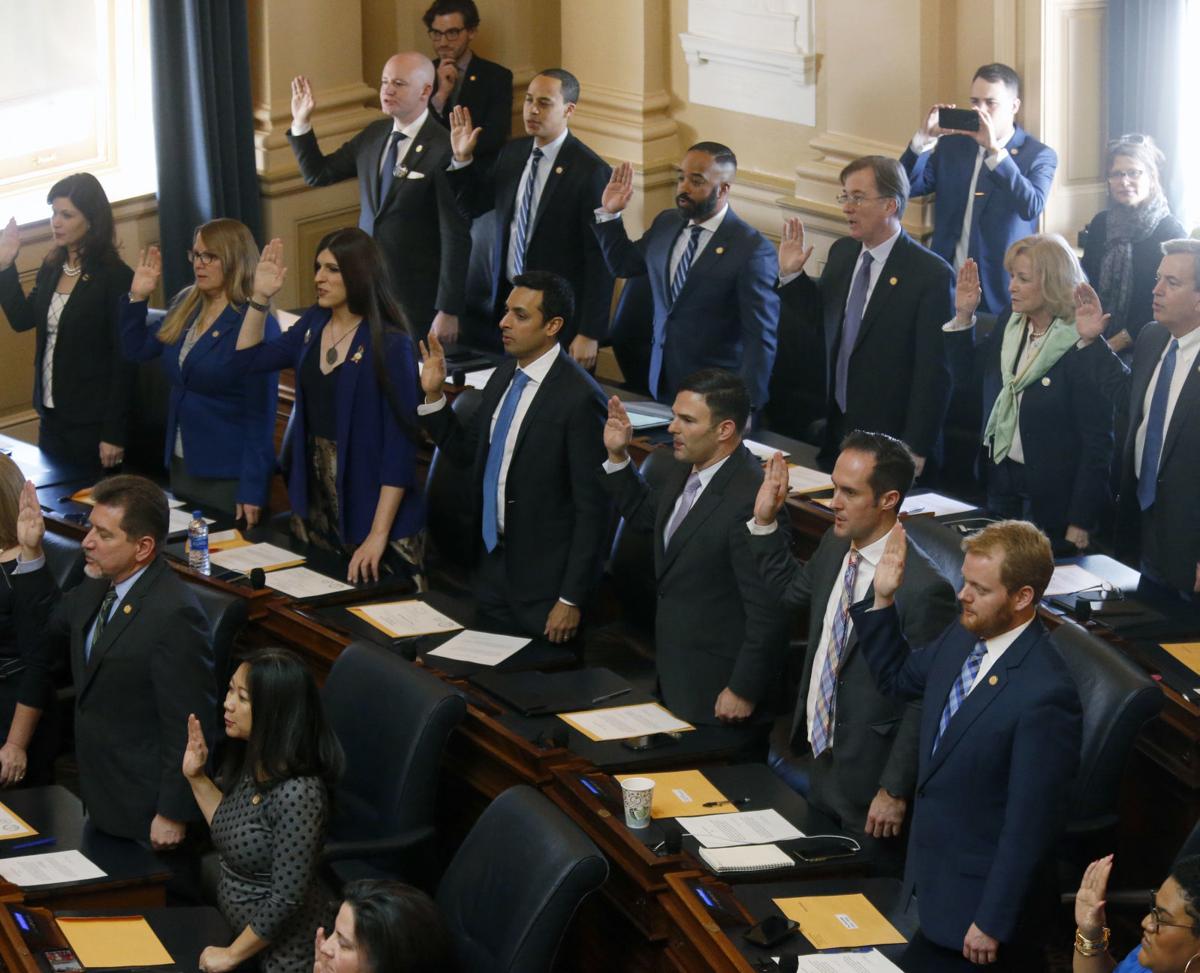 Democratic members are sworn in inside the House of Delegates chamber at the Virginia State Capitol in Richmond, VA Wednesday, Jan. 8, 2020, the first day of the new legislative session.

“A new torch is being passed today, one that ushers in a modern era, representing all Virginians, learning from our shared experiences and moving forward in our collective prosperity,” said Del. Eileen Filler-Corn, D-Fairfax, in her remarks after being elected as the first woman to serve as the speaker of the House of Delegates.

With a 55-45 majority in the House and 21-19 edge in the Senate, Democrats have control of both chambers of the Virginia General Assembly for the first time in two decades.

“This is the foundation of the future we are building, one that will be more than just the labels we all represent,” Filler-Corn said. “It is meaningful that we represent groups that haven’t always been heard in the halls of power and that we bring their experiences with us here.”

“She will make history in many ways,” Sen. Steve Newman, R-Lynchburg, said of Lucas on the Senate floor during a speech supporting her nomination for president pro tempore.

“I started out this morning with excitement and joy, but at this point, with the House so disorganized, I’m starting to get a big headache,” Walker said about the Democratic House leaders who weren’t ready to establish the rules that govern the conduct of the session and give lawmakers their committee assignments.

In the Senate, Republicans pushed back against how few of their members were put on some of the committees that review legislation. They took particular issue with a lack of party and geographic representation.

Minority Leader Tommy Norment, R-James City, said Republicans in the past felt it was important to make sure someone from far Southwest Virginia was on the powerful budget-writing Senate Finance Committee. He said the region can feel isolated from the rest of Virginia.

Sen. John Edwards, D-Roanoke, who represents parts of the New River Valley, is the southernmost senator on the committee.

“I can certainly understand elections have consequences,” said Sen. Ben Chafin, R-Russell. “And I can understand to the victor go the spoils. What I don’t get is disenfranchising an entire region.”

The next two months are expected to be busy with Democrats eager to pass legislation that Republicans have shut down for years. Lawmakers already have filed more than 2,000 pieces of legislation, and they’re still introducing more in the coming days.

Items on the Democrats’ agenda include passing the Equal Rights Amendment and criminal justice reform, making it easier to vote, banning discrimination in housing and employment, rolling back abortion restrictions, increasing the minimum wage and boosting clean energy.

Minority Leader Todd Gilbert, R-Shenandoah, said Republicans reading those bills and hearing what Democrats are saying worry that the other side of the aisle is going to roll back all of the work they did in the past couple of decades, especially in expanding gun rights and restricting abortion rights.

Gilbert said Democrats owe a debt to organizations that poured millions of dollars into flipping the General Assembly.

“Our job is to hold them accountable for what they do. We believe they are being driven by interests that to go farther to the left than the average voter and the average Democratic voter,” Gilbert said.

Gilbert said Republicans will spend the next two years holding Democrats accountable for their policies. He said he’s trying to keep the mood among Republicans “upbeat,” reminding them that no party stays in power forever.

“We’re all adjusting, but there’s no reason to throw in the towel yet,” he said. “Virginia’s not deep blue yet.”

Democrats spent the morning holding rallies and gatherings to build excitement about their priorities.

A crowd of people wearing purple and waving “ERA in the USA” signs stood outside the Capitol building to cheer on Democrats as they entered the building. Nearby, Del. Sam Rasoul, D-Roanoke, led a group of people chanting for the Green New Deal he’s sponsoring.

A few dozen people also stood outside the Capitol with “Guns Save Lives” stickers. Democrats have sponsored numerous gun control measures, and the issue is sure to dominate the session. Buses of gun control and gun rights advocates will pour into Richmond next week and the following week.

Another theme of the day: civility and respect.

“I pray that we will be guided by our best impulses and not our worst,” Gov. Ralph Northam said Wednesday morning at an annual prayer breakfast with lawmakers and religious leaders.

“I pray that when we look back on our work this session, we will be content that we acted in faith and treated each other well.”

RICHMOND, Va. (AP) — A new era in Virginia politics began Wednesday, as Democrats took full control of the state house for the first time in a…

RICHMOND — Several months after a gunman killed 32 people at Virginia Tech in 2007, a bill to require background checks on all firearm purchas…

RICHMOND (AP) — Virginia moved to the brink of becoming the crucial 38th state to ratify the Equal Rights Amendment on Wednesday, a momentous …

New House Speaker Eileen Filler-Corn, D-Fairfax, addresses members Wednesday after being sworn in at the Virginia State Capitol. She is the first woman to be elected speaker of the House of Delegates.

Democratic members are sworn in inside the House of Delegates chamber at the Virginia State Capitol in Richmond, VA Wednesday, Jan. 8, 2020, the first day of the new legislative session.