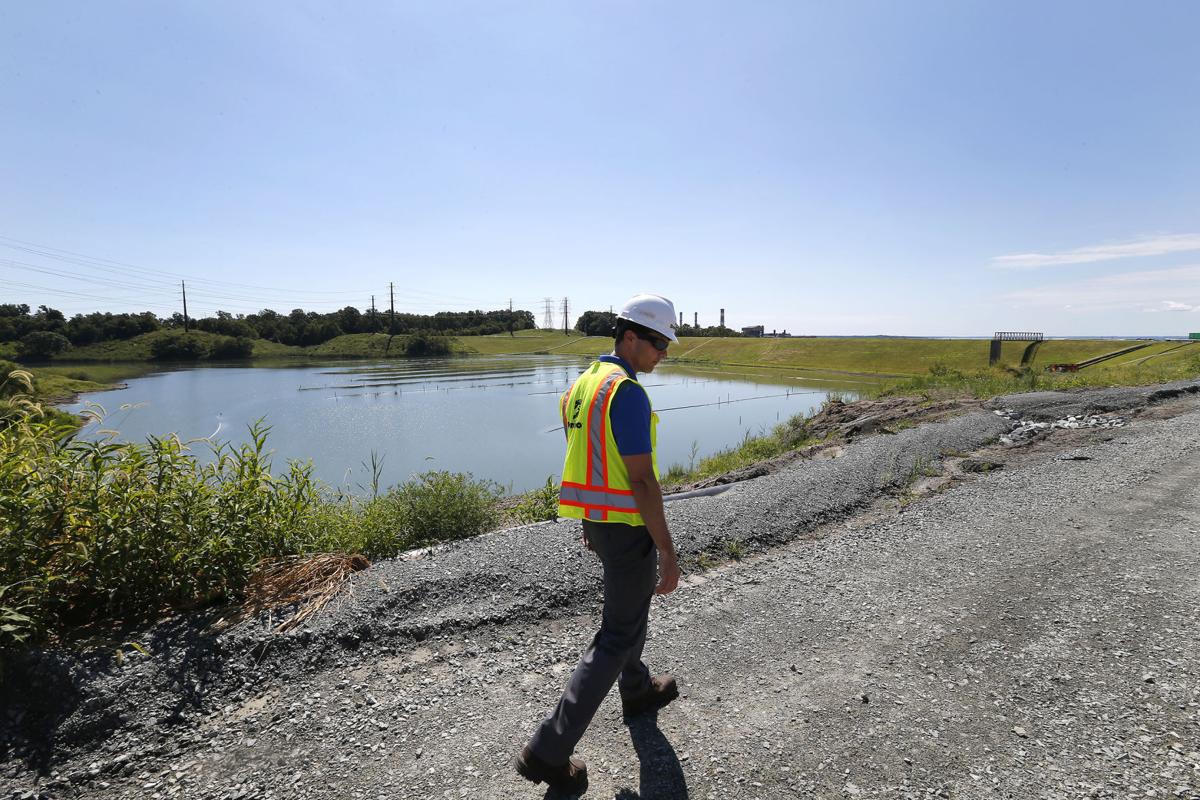 Jason Williams, manager of electric environmental services for Dominion, walks the site of pond D that is being dewatered as part of the cap and close process at Dominion Possum Point Power Station in Dumfries. Tues. Aug. 24, 2016. 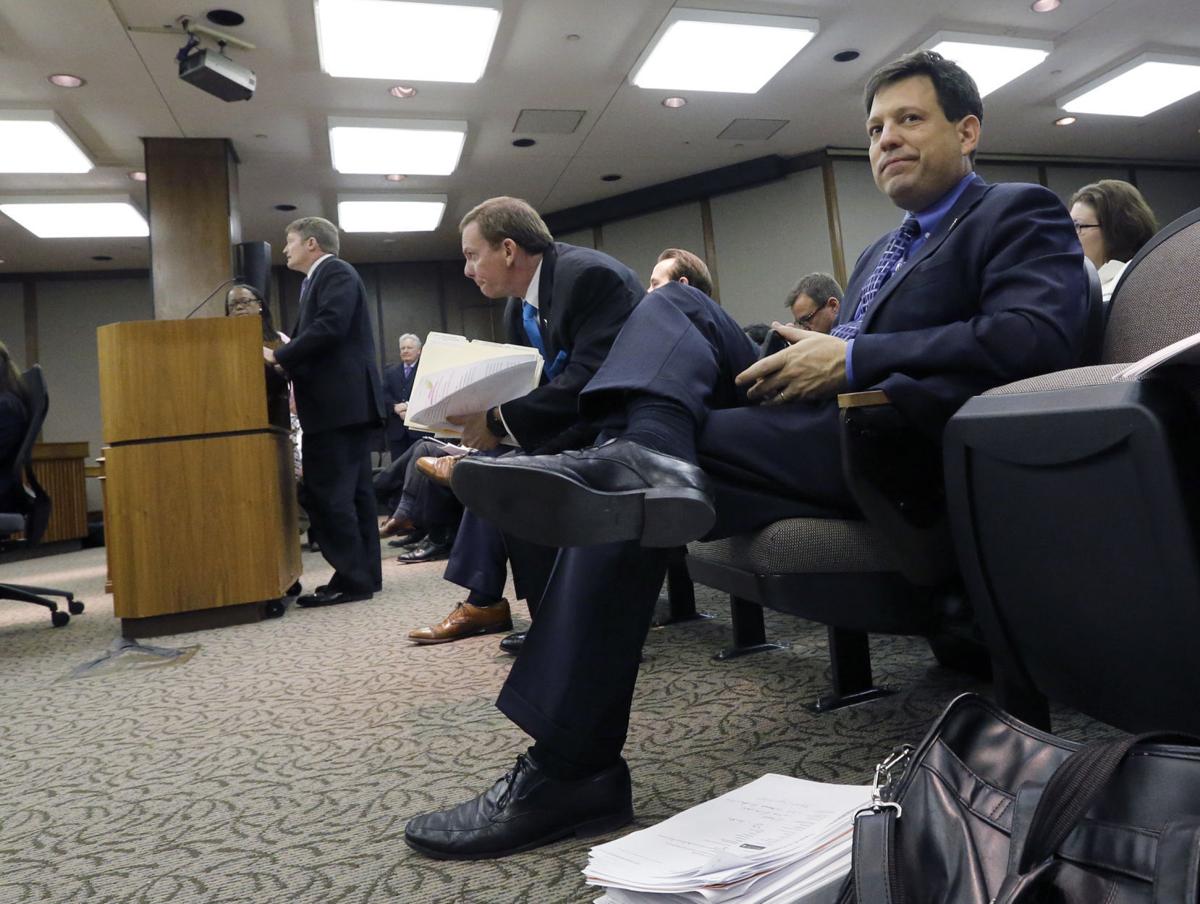 Sen. Scott A. Surovell, D-Fairfax (right), waited to present his bill to a Senate committee in February. It was prompted by worries over Dominion’s plans to close 11 coal ash ponds.

Gov. Terry McAuliffe has requested an amendment restoring language that prevents Dominion Virginia Power from getting permits to close its coal ash ponds before detailed site assessments of existing contamination and other closure options are completed, a provision that was stripped from a bill that passed the General Assembly last month.

"My administration is committed to protecting water quality and drinking water sources for residents throughout the entire Commonwealth of Virginia as we address the closure of coal ash impoundments," McAuliffe said in a statement. “While I support the Department of Environmental Quality's approach to addressing this issue and the agency is currently following the path laid out under state law and federal regulations, there has been tremendous public concern and outreach on this topic. As such, I am proposing amendments to Senate Bill 1398 that will provide the public with more information on the costs and benefits, risks, and recycling options for coal ash before a final decision on the permits is reached. My hope is that this additional process will increase the public's confidence in the path that Virginia ultimately takes."

The General Assembly will take up McAuliffe's proposed amendments during the one-day reconvened session on April 5. It was unclear if Dominion,  a major donor to Virginia political campaigns and a powerhouse in the General Assembly, will fight the coal-ash amendment.

"What I can tell you is that we are starting to work immediately on this assessment, the feasibility study that's going to look at alternatives to cap and close," said Robert Richardson, a company spokesman. "I think we'll have to wait and see what our position is. We have been pretty consistent in saying that our focus is on safely closing coal ash ponds. This change, this amendment slows down the process some. But we recognize that it's important to work with our regulators and the environmental community on this to make sure we get it right. So we're focused on that."

The legislation, by Sens. Amanda Chase, R-Chesterfield, and Scott Surovell, D-Fairfax, was the product of swelling concern over the past year among environmental groups and some local officials over Dominion's plans to close 11 coal ash ponds at four locations in response to new federal regulations. The utility is consolidating ash at the sites into five ponds that will be capped and closed in place.

Groups such as the Sierra Club and the Southern Environmental Law Center say evidence demonstrates that the ponds are already leaking and that covering them with a liner and leaving them in place might mean leaching of the toxic heavy metals the ash contains for decades or a more expensive cleanup down the road.

They want Dominion to dig up the ash and haul it away to lined landfill or pursue more recycling options, as is happening in some cases in states like North Carolina, South Carolina and Georgia.

However, the bill lost key provisions on its path to passage in the House of Delegates, including restrictions on DEQ issuing permits before Dominion compiles information on existing contamination at the sites, options for excavating and recycling the ash and demonstrating the long-term safety of the closed ash ponds.

McAuliffe's amendments would mean the DEQ could not issue any permits for the closure of the sites until May 18, 2018, "or the effective date of any legislation adopted during the 2018 Regular Session of the General Assembly" that addresses coal ash pond closure, "whichever occurs later." They also require Dominion to submit its assessments to state officials and lawmakers by Dec. 1.

The Possum Point station's draft solid waste permit has been issued, with a final version expected to come in June. About 5 million tons of ash are at the site and Dominion has agreed to connect to public water some residents who fear leaching from the ash ponds has contaminated their drinking wells.

Ash ponds at Chesterfield, Chesapeake and Bremo show evidence of leaking into adjacent waterbodies, according to testing conducted by environmental groups.

"Without this amendment, Virginians could have to deal with the fallout from Band-Aid solutions to a very real, very dangerous environmental threat," said Mike Town, executive director of the Virginia League of Conservation Voters in a statement. "We urge the full General Assembly to do the right thing for their constituents. Dominion Power should not be allowed to play Russian roulette with our water quality and I hope between now and May 2018, they focus their energy on evaluating coal-ash sites instead of lobbying against clean-water protections that keep communities safe."

STANLEY, Va. (AP) — A police officer in a Virginia town was shot and killed by a driver during a traffic stop before he could get out of his p…

Jason Williams, manager of electric environmental services for Dominion, walks the site of pond D that is being dewatered as part of the cap and close process at Dominion Possum Point Power Station in Dumfries. Tues. Aug. 24, 2016.

Sen. Scott A. Surovell, D-Fairfax (right), waited to present his bill to a Senate committee in February. It was prompted by worries over Dominion’s plans to close 11 coal ash ponds.