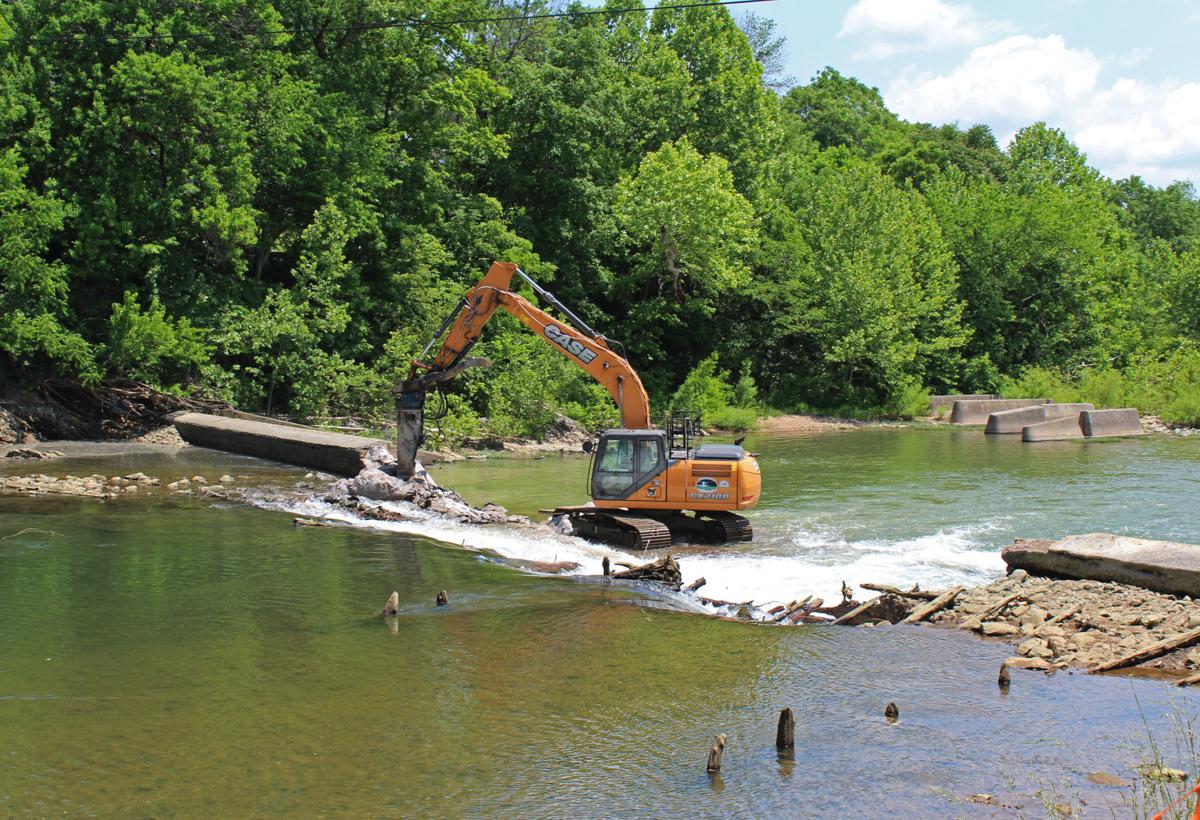 Crews demolish the dam at Jordan’s Point Park in Lexington in May. The loss of the dam lowered water levels at the park. 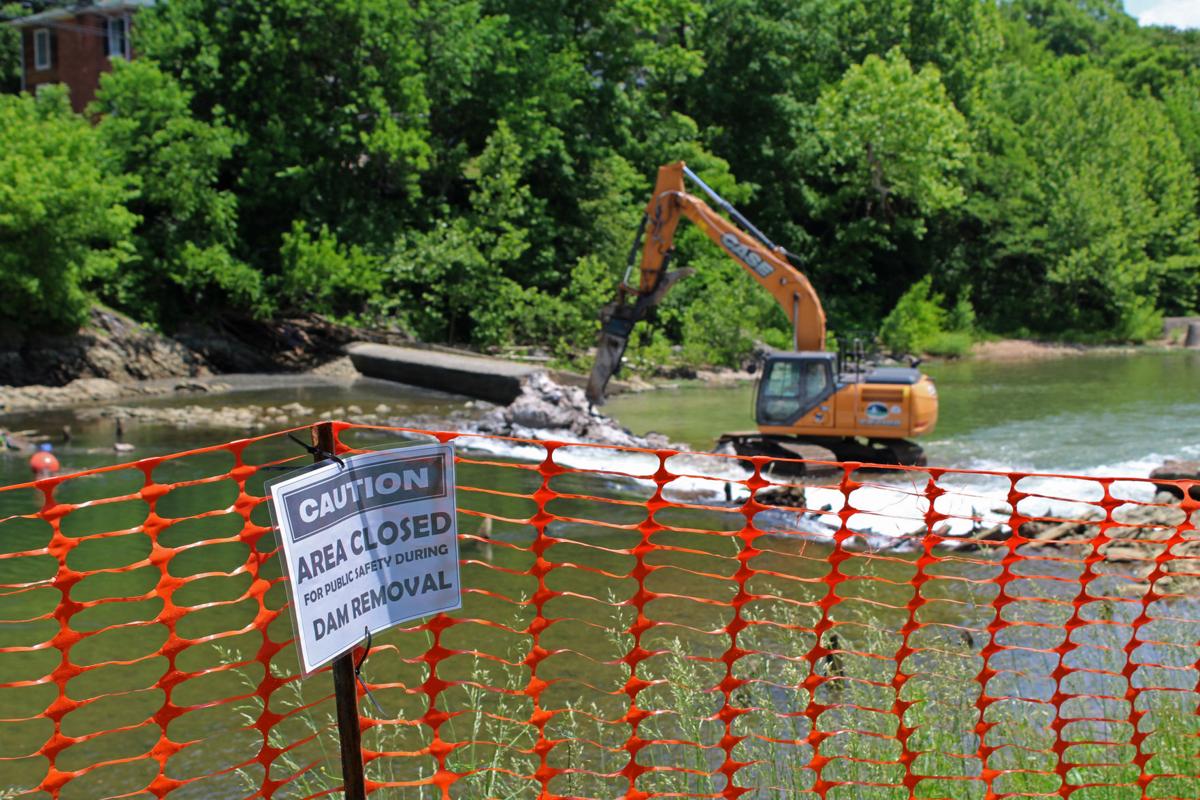 Signs warn visitors to stay back from the Maury River while the dam at Jordan’s Point Park is being removed over the next week or two. Residents gathered Friday to watch the demolition of the more than 100-year-old dam.

LEXINGTON — Time has run out for the 120-year-old dam at Jordan’s Point Park. Construction crews began demolition late afternoon Thursday and less than 24 hours later, most of the dam was gone.

Crews drilled into the 10-foot concrete dam Friday and pulled it apart piece by piece. The river rushed through the new opening and the stream bed was visible just upstream from the dam.

Louise Finger, a biologist with the Virginia Department of Game and Inland Fisheries, said as the water level lowered, it revealed another dam next to the concrete one. Finger said crews suspected this second dam existed, but they weren’t able to see it because of the water level and built-up sediment.

The other dam is made from wood and most likely preceded construction of the concrete dam more than 100 years ago. Architectural historians will work with the agency to document both the concrete and wooden dams before and during their removal, Finger said.

The Virginia Department of Historic Resources will have to approve the documentation before demolition of the wooden dam begins.

Finger said she expects the entire process to take one to two weeks as crews remove both dams and whatever debris and sediment is left to restore the Maury River to a free-flowing state.

Parts of the dam will remain on both sides of the river and slope down to the stream bed for historical interpretation, she said.

Lexington’s city council first voted to remove the dam in 2017. The state Department of Conservation and Recreation told the city it would need to either repair or remove the dam before its operating permit expired in the summer of 2019.

Repairing the dam, which had numerous cracks and holes throughout its foundation, would have cost between $2.5 million and $3 million, according to an engineering study completed in 2007.

But Department of Game and Inland Fisheries officials came forward with a plan to remove the dam with a pool of grant money and at no cost to the city.

Residents quickly divided over whether the dam should come down. Some shared concerns about safety — a 16-year-old boy drowned in the hydraulic churn beneath the dam in 2006. Others saw the recreational opportunities in the standing pool of water the dam created just upstream.

In the end the council voted twice to remove the dam — the initial decision in 2017 and again last year when a nonprofit group came forward with plans to save it just weeks before the city’s deadline to back out of its deal with the state agency.

The nonprofit’s plans were too vague and their proposal came too late, council members said.

The state brought in construction equipment and built a causeway to access the dam in April.

Workers also demolished and removed eight of the 13 piers from a former railroad bridge that were downstream from the dam.

They also removed two historic millstones downstream, which the city and historical organizations can use for displays at the park or local museums. The millstones are thought to have come from the gristmill that once operated at Jordan’s Point.

LEXINGTON — The water level began to sink the moment construction crews breached the dam at Jordan’s Point Park in May. Today, the Maury River…

Crews have started preparations to remove the dam at Jordan’s Point Park in Lexington after two years of negotiations, public meetings and wea…

LEXINGTON — The city council voted Thursday to reaffirm its decision to remove the dam on the Maury River at Jordan’s Point Park.

LEXINGTON — Residents have debated the fate of the Jordan’s Point dam for more than a year, but time may finally be winding down for the 120-y…

LEXINGTON — The Rockbridge County Board of Supervisors is working with a nonprofit to potentially take ownership of the dam at Jordan’s Point Park.

Secretary of Natural Resources Matthew Strickler relaxed the deadline for the Lexington City Council to decide whether to remove Jordan’s Point dam.

LEXINGTON — The Lexington City Council will decide the fate of the dam at Jordan’s Point Park at a special meeting 5 p.m. Saturday after a non…

LEXINGTON — A dam on the Maury River that is both a death trap and a Lexington landmark should be destroyed, the city council decided Thursday night.

Crews demolish the dam at Jordan’s Point Park in Lexington in May. The loss of the dam lowered water levels at the park.

Signs warn visitors to stay back from the Maury River while the dam at Jordan’s Point Park is being removed over the next week or two. Residents gathered Friday to watch the demolition of the more than 100-year-old dam.