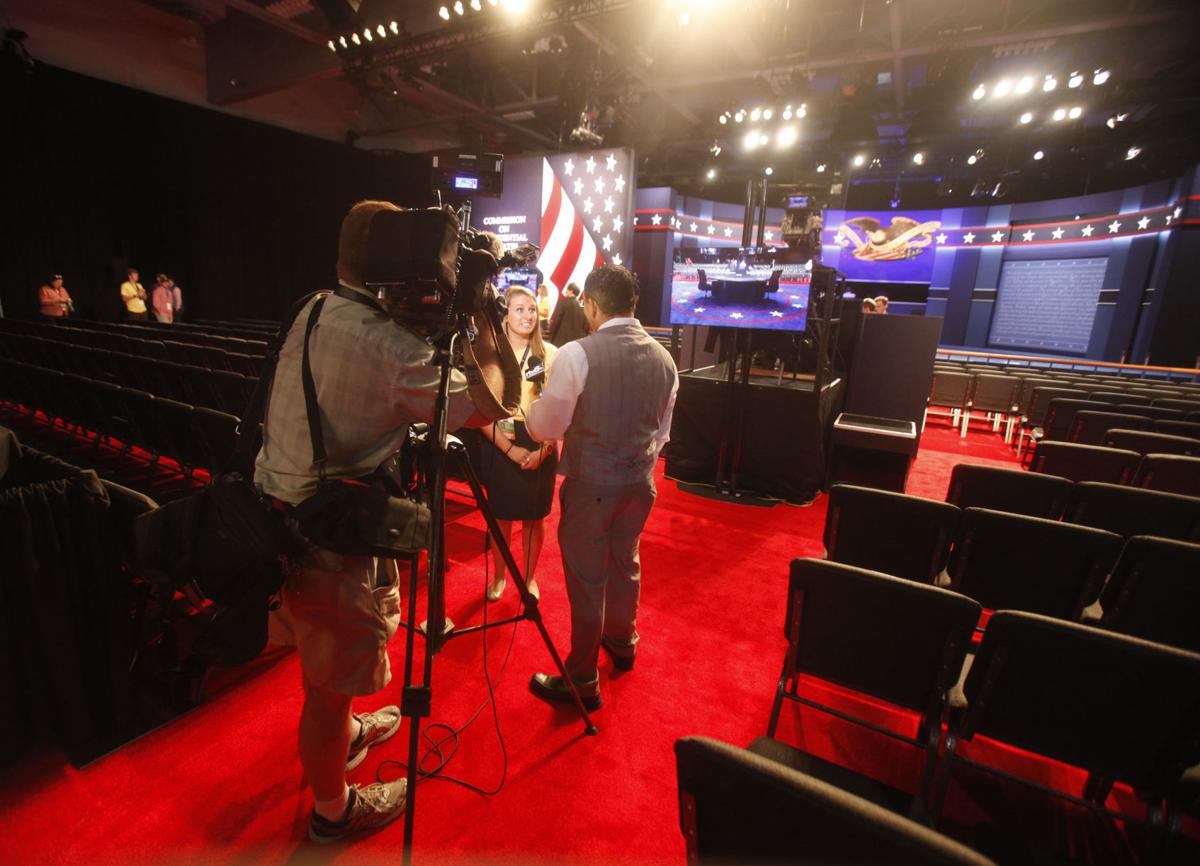 Reporters conducted interviews on the floor of the debate hall at Longwood University campus on Monday. 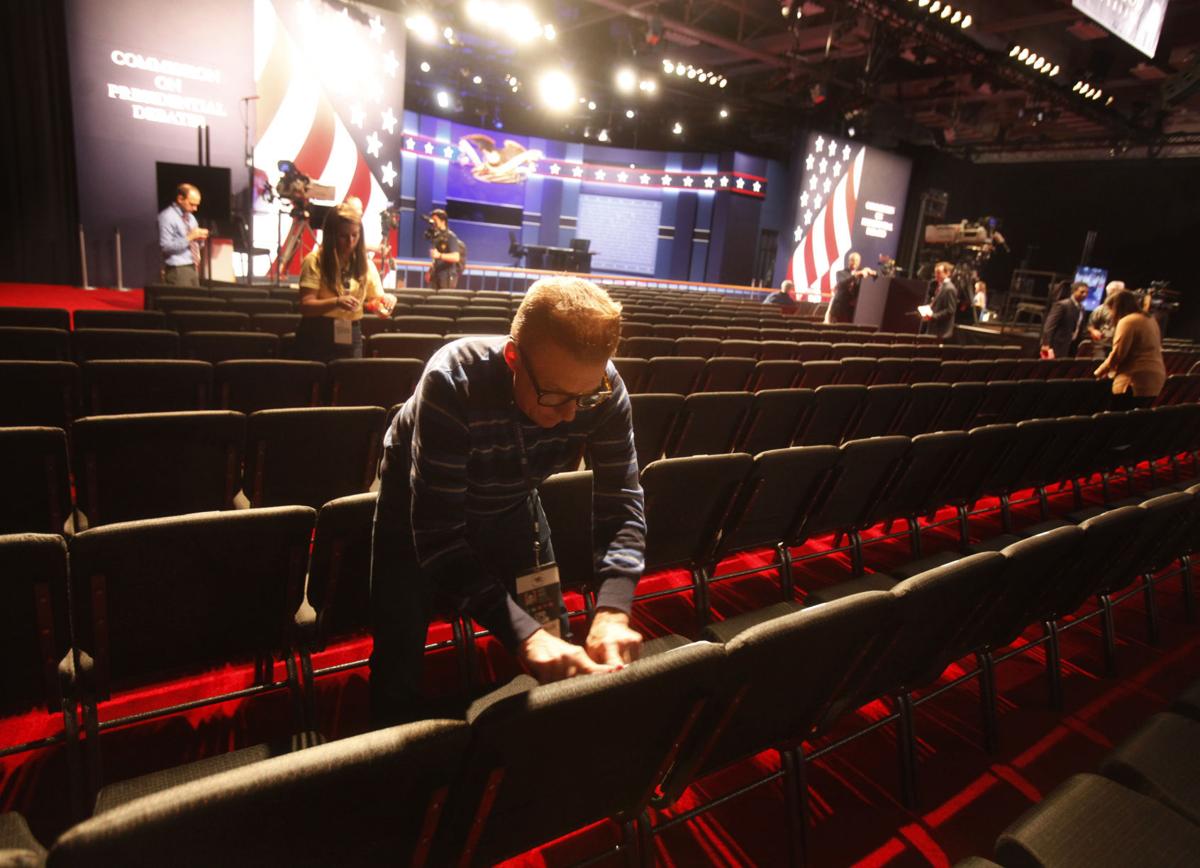 Volunteers prepare for the vice presidential debate at Willett Hall at Longwood University on Monday. Democrat Tim Kaine and Republican Mike Pence will appear Tuesday night for their only head-to-head campaign event.

FARMVILLE — When Democratic Sen. Tim Kaine and Republican Gov. Mike Pence face off at Longwood University on Tuesday for the first and only vice presidential debate, university President Taylor Reveley will not be in the audience.

With limited seating in Willett Hall for the debate — about 500 seats, with 100 of those designated for students, Reveley gave up his ticket so one more Longwood student could attend the historic event.

“President Revely is going to do his opening remarks tomorrow and then he is going to leave the debate hall so a student can have his seat,” Longwood senior Alex Jolly said. “I just think that’s something you wouldn’t find somewhere else. When he said that last night, it made me truly proud to be a Lancer.”

As more than 2,000 members of the local, national and international media converge on Farmville — a town of about 8,000 people — for the debate, the town and university have been thrust into the political spotlight with a little more than a month left until Election Day.

Students milled about campus Monday as crews from national news stations set up sound equipment, lighting and stages from which network anchors will analyze the 90-minute debate moderated by Elaine Quijano of CBS News.

Students on Stubbs Mall stood in line for free Longwood T-shirts, and plastic, party sunglasses as they waited for comedy troupe Second City to kick-off a performance on stage.

The shirts read: History is made at Longwood University.

While Longwood students are out of class as part of a weeklong fall break, many returned to campus before debate activities kicked off on Sunday. That evening included a pop-rock concert and the lottery for coveted student tickets into the debate hall on Tuesday.

About 800 students registered for tickets and more than that are volunteering in some capacity to help with various debate events. Longwood, a public university, has about 5,000 students.

“I got really excited watching the first presidential debate and hearing Longwood University on national television,” graduate student Michelle Kassel said. “It was like a one sentence shout-out, but it was like this is real and it’s happening here.”

As Kassel and her friends waited in line for a caricature picture of their group, they cautioned reporters against stepping on blue drawings of the Longwood Rotunda painted on campus sidewalks.

“Don’t step on the spirit of Longwood,” one of them hooted.

The debate in Kaine’s home state will be the third presidential or vice presidential debate to take place in Virginia. President George H.W. Bush debated Arkansas Gov. Bill Clinton in 1992 at the University of Richmond and Jimmy Carter took on President Gerald Ford at the College of William and Mary in 1976.

The Commission on Presidential Debates selected Longwood for the vice presidential debate more than six months before Hillary Clinton selected Kaine as her running mate.

Since then, Longwood has invested more than $4 million into campus improvements and covered the university with red, white and blue banners commemorating the momentous occasion.

Away from all the media fanfare Monday, several people strolled through the Robert Russa Moton Museum devoted to the civil rights movement that helped bring the vice presidential debate to Farmville.

The debate commission chose Farmville and Longwood for the debate, in part, because of the town’s Civil War and civil rights history.

The Civil War wound down on the north side of Longwood’s campus just before Gen. Robert E. Lee surrendered down the road in Appomattox.

On the south end of campus, 16-year-old Barbara Johns and her fellow students walked out of their all-black high school in 1951 because of the conditions of their school compared with white schools. The school was turned into a museum about 20 years ago.

Joan Johns Cobbs was 13 years old when her sister incited 455 students to walk out of the high school, an incident that eventually became one of five cases across the country incorporated into the landmark Supreme Court case Brown v. Board of Education.

“I didn’t dare not follow because she was bossy,” Cobbs said Monday. Cobbs, the shy sister in the family, worried about how her parents would react when they heard about the walk-out. They were shocked, but Cobbs said the behavior was not unusual for her free-spirited sister.

After the Supreme Court ruled that separate was not equal in public education, Prince Edward County closed its public schools for five years in an attempt to fight desegregation.

Johns’ story isn’t well-known beyond Farmville, said Cainan Townsend, the museum’s director of education and public programs. The spotlight of the vice presidential debate can shed more light on the town’s complicated and compelling history, he said.

The museum is launching a civil rights walking tour Tuesday to coincide with the debate. The tour will visit historic locations across town that correspond to Johns’ 13-year legal fight for equality.

“I’m glad Farmville will start to be known for more than the Facebook game,” Townsend said.

The vice presidential debate will air from 9 p.m. to 10:30 p.m. Tuesday on all major television networks and some cable channels. The debate will be split into nine 10-minute segments on a various topics.

Scroll down to see our ScribbleLive of social media reactions during the debate tonight, and catch up on previous coverage before the event begins.

Reporters conducted interviews on the floor of the debate hall at Longwood University campus on Monday.

Volunteers prepare for the vice presidential debate at Willett Hall at Longwood University on Monday. Democrat Tim Kaine and Republican Mike Pence will appear Tuesday night for their only head-to-head campaign event.