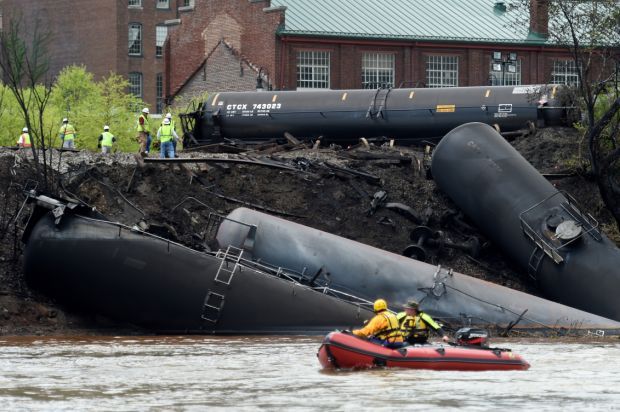 Workers prepare to begin pulling the first of three oil tanker train cars from the James River in Lynchburg. 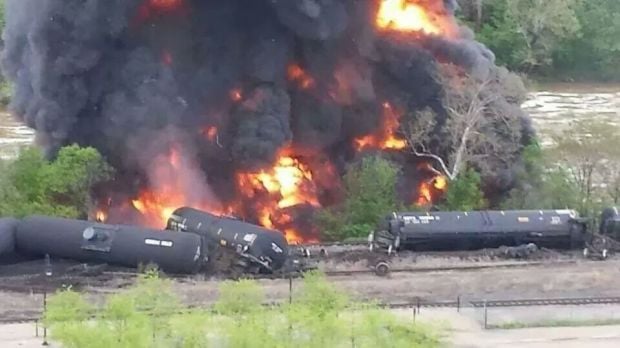 By late afternoon Thursday, cleanup crews on the banks of the James River were slowly hauling up the first of three oil tankers that were sent tumbling into the river in Wednesday's train derailment.

CSX, which had cranes and other heavy machinery on site, said most of the overturned rail cars had been "repositioned for removal from the site" by nightfall and work will continue into today. The National Transportation Safety Board said the cars are being taken to a location where they can be thoroughly examined.

The state announced it's estimating that 20,000 to 25,000 gallons of crude oil were released from the tankers that hit the water when the train derailed in downtown Wednesday afternoon.

This cuts in half an initial estimate released by local agencies in the immediate wake of the crash. It remains unclear how much of the oil burned up in the fire that ignited, and how much worked its way into the river.

Crews and machinery were crawling along the banks of the river Thursday as responders worked to right the 13 overturned rail cars that had been carrying crude oil from North Dakota to Yorktown.

"It's like an ant hill," said Dave Poole, owner of the Depot Grille, which was taken over as an impromptu command center.

"It's just unreal the number of people coming and going, and all this equipment that arrived in a short amount of time."

The Depot Grille and Amazement Square, both near the crash site, were the only two downtown buildings to remain closed off Thursday.

Poole's restaurant became the headquarters for the response effort, and his staff came in to serve up food to the crews.

The restaurant is feeding them breakfast, lunch and dinner, and a manager is even there overnight to keep the coffee flowing.

"We actually had people who were in the building working yesterday [during the crash and evacuation], and came back today to help feed the crews and clean up," Poole said. "The staff has been incredibly resilient and good natured. Everybody has been incredibly positive."

Poole said CSX has promised to reimburse him for the food and other expenses. The rail company has set up a community outreach center at the Wingate Hotel to assist people affected by the derailment and subsequent evacuation of the Jefferson and Commerce street areas.

CSX representatives also went door-to-door Thursday and visited about 150 downtown businesses. The derailment response is a "huge priority" for the company, said spokeswoman Melanie Cost, and it is committed to putting things right.

The company has offered to reimburse the city and other first responders for the cost of dealing with the derailment.

The city said Thursday it's tracking its expenses, but no immediate estimates were available. The cost will start coming into focus next week when the pay period ends and employees report their overtime.

Members of the National Transportation Safety Board, the federal agency that will conduct the investigation into what caused the derailment, arrived in Lynchburg around 10:30 p.m. Wednesday.

On Thursday, during a press conference attended by several national media outlets, lead investigator Jim Southworth said the fact-gathering phase of the probe may "last anywhere from a few days to a few weeks," and it could be six to 18 months until a final report is released.

"These types of incidents happen very quickly, but they take quite a bit of time to go through thoroughly," said Southworth, who came down from Washington, D.C. "This will be a well-orchestrated industrial ballet."

The NTSB will be forming multiple work groups to examine different aspects of the train's operations, from railroad signals to hazardous materials to the track itself, he said.

The work groups will meet on a daily basis, and include several NTSB specialists as well as people from CSX, the Federal Railroad Administration and rail employee unions.

The train that derailed was hauling a total of 105 tanker cars filled with crude oil, according to the NTSB. It was traveling at 24 miles an hour. The speed limit there is 25 miles an hour.

The cause of the derailment remains unclear. Southworth said officials don't yet know if this week's heavy rains — including a daily record-setting 0.93 inches Wednesday — were a contributing factor as hypothesized by one former federal official.

The impact of the weather is one of many considerations that NTSB's track specialist will examine, he said.

"We'll open every door and we'll close every door before we start setting any kind of focus," Southworth said.

Wednesday's derailment happened just before 2 p.m. and sent flames and black smoke shooting up in the air. People from surrounding buildings quickly began self-evacuating when they saw the fire.

"People were running up the street as fast as they could go," said Brandon Reynolds, manager of Bikes Unlimited on Jefferson Street. "Cars were spinning gravel trying to leave."

The city later ordered an evacuation of the Jefferson and Commerce streets area that continued for about four hours. Griffin Pipe, a 24-hour operation located on the riverfront, had to gradually shut down its operations to comply with protocol, said security officer Gerald McComas.

The plant was cleared out by about 5 p.m., McComas said. Employees had to leave out of the back gate and walk around because the train was blocking the main entrance off Seventh Street, he said. Once the evacuation was lifted, the plant's midnight shift was able to report for work on time, he said.

On Thursday, most of downtown beyond the riverfront appeared to be back to normal. Clusters of people lingered off Commerce Street where glimpses of the train cleanup could be spied, but the district was otherwise engaged in its normal hustle and bustle.

Organizers of "Keys for the Hill City," a public art project bringing painted pianos to Main Street, were setting up their exhibits. The project is making its debut tonight during First Fridays, which is continuing on schedule.

On Thursday afternoon, Mark Smith, an architect who works on the upper floor of the Depot Grille building, was having a meeting in a parking lot on Commerce Street because his offices were closed off.

The architecture firm was granted limited access to its offices, but couldn't bring in visitors. Smith took the prohibition in stride, though, noting jokingly that the weather, at least, was nice.

"Yesterday, we were all worried about making deadlines," he said. "Then that [derailment] happened and put everything into perspective real quick."

Smith said he's been downtown for 20 years and seen it endure fires, a flood and now a train wreck.

"But we're still here," he said, pointing to the papers he had spread out on the bed of a pickup truck. "We're still working and improvising."

Local and state officials said the derailment response has moved past the emergency phase and is now in cleanup mode.

"We continue to monitor and take samples from the James River to detect any impacts," said David Watson, spokesman for the Virginia Department of Emergency Management. "But Virginia's drinking water continues to be safe, and there is not a public safety threat."

The downstream impacts of the oil spill are expected to be "minimal or otherwise undetectable," Watson said, and multiple agencies are coordinating to ensure all drinking water supplies are protected.

Lynchburg's drinking water is unaffected by the incident. The city is pulling from its primary water source, the Pedlar Reservoir in Amherst County.

City Manager Kimball Payne has lifted the state of emergency declaration he issued shortly after the derailment. Payne and others praised Wednesday's quick and organized response by local emergency crews.

"They just continuously impress me with how well they react to situations like this," Payne said. "Fortunately, we don't have too many of them. But I think they did a fantastic job."

Poole said the response of local agencies and other crews that followed has been "phenomenal."

"I'm just so thankful no one was hurt," he said. "It's a crazy situation, but it seems to be being handled as best as humanly possible."

Poole said he's been told that responders hope to relinquish the Depot Grille by tonight, but the timeline remains "flexible."

The restaurant building itself is intact and sustained no damage, he said. A food supplier who had to abandon his truck near the crash site returned later and found it unscathed, he said.

"There wasn't a scratch on the paint," Poole said. "How no one was hurt and no one else's property was damaged is beyond belief. We were incredibly lucky." A family of turtles plopped in the James River as a boat approached them Thursday afternoon, not far from where a CSX train derailed and spewe…

By late afternoon Thursday, cleanup crews on the banks of the James River were slowly hauling up the first of three oil tankers that were sent…

Roanoke has prepared for any hazardous material release that might strike its downtown which, like Lynchburg’s, rumbles with freight trains, a…

About 50,000 gallons of crude oil were unaccounted for late Wednesday after a CSX train derailed in downtown Lynchburg and sent three flaming …

LYNCHBURG — While cleanup crews clipped burned tree branches and removed debris at the CSX crash site in downtown Lynchburg on Tuesday, the ci…

Workers prepare to begin pulling the first of three oil tanker train cars from the James River in Lynchburg.