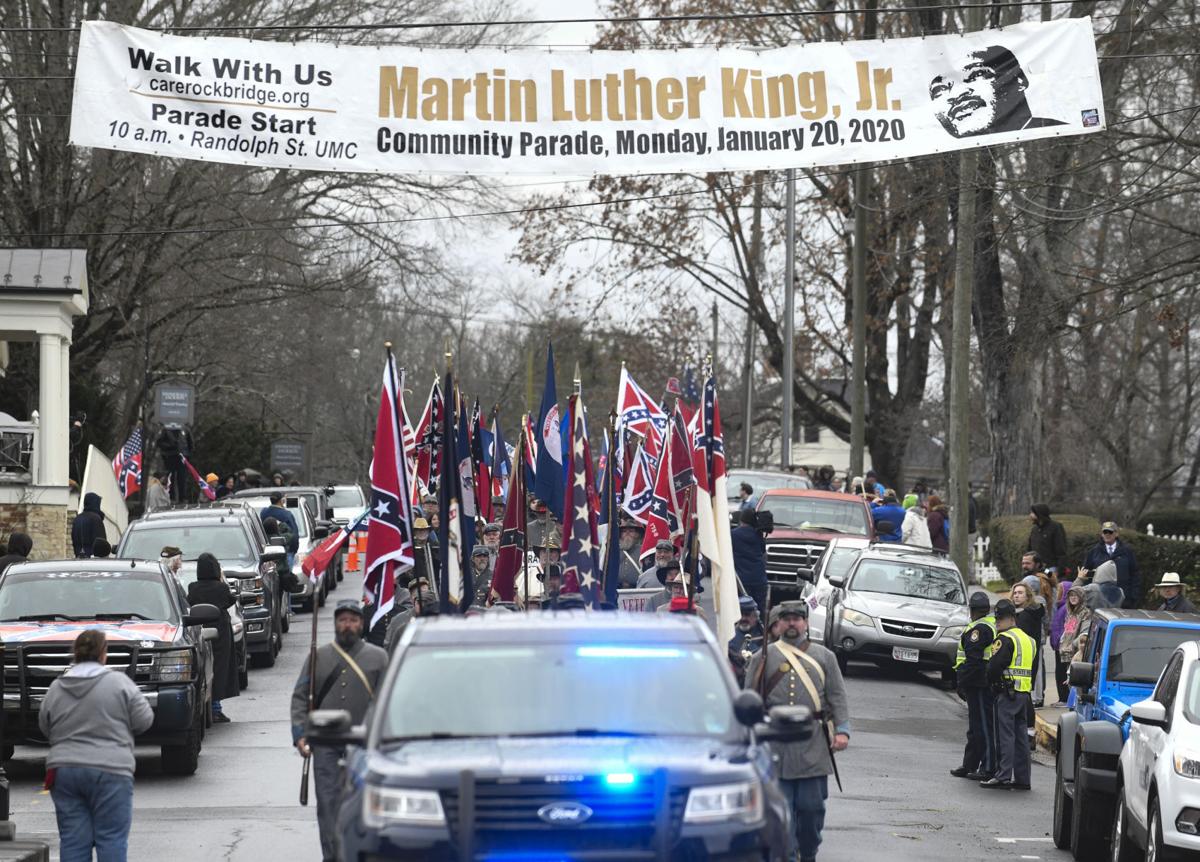 Participants in the annual Lee-Jackson Day parade march under a banner advertising a parade in remembrance of Dr. Martin Luther King. 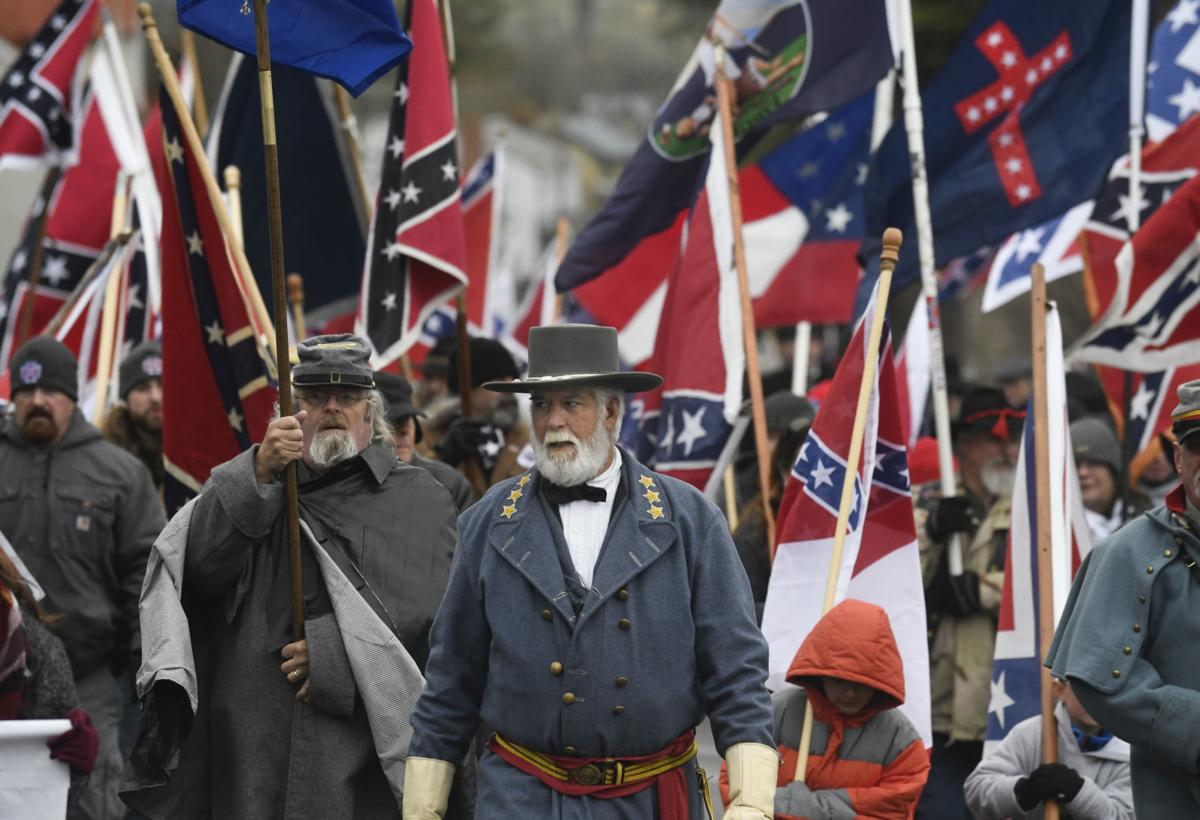 Surrounded by flags of the Confederacy, Braxton Spivey portrays Gen. Robert E. Lee as he leads the Richmond-based group Virginia Flaggers during the Lee-Jackson Day parade in Lexington on Saturday. 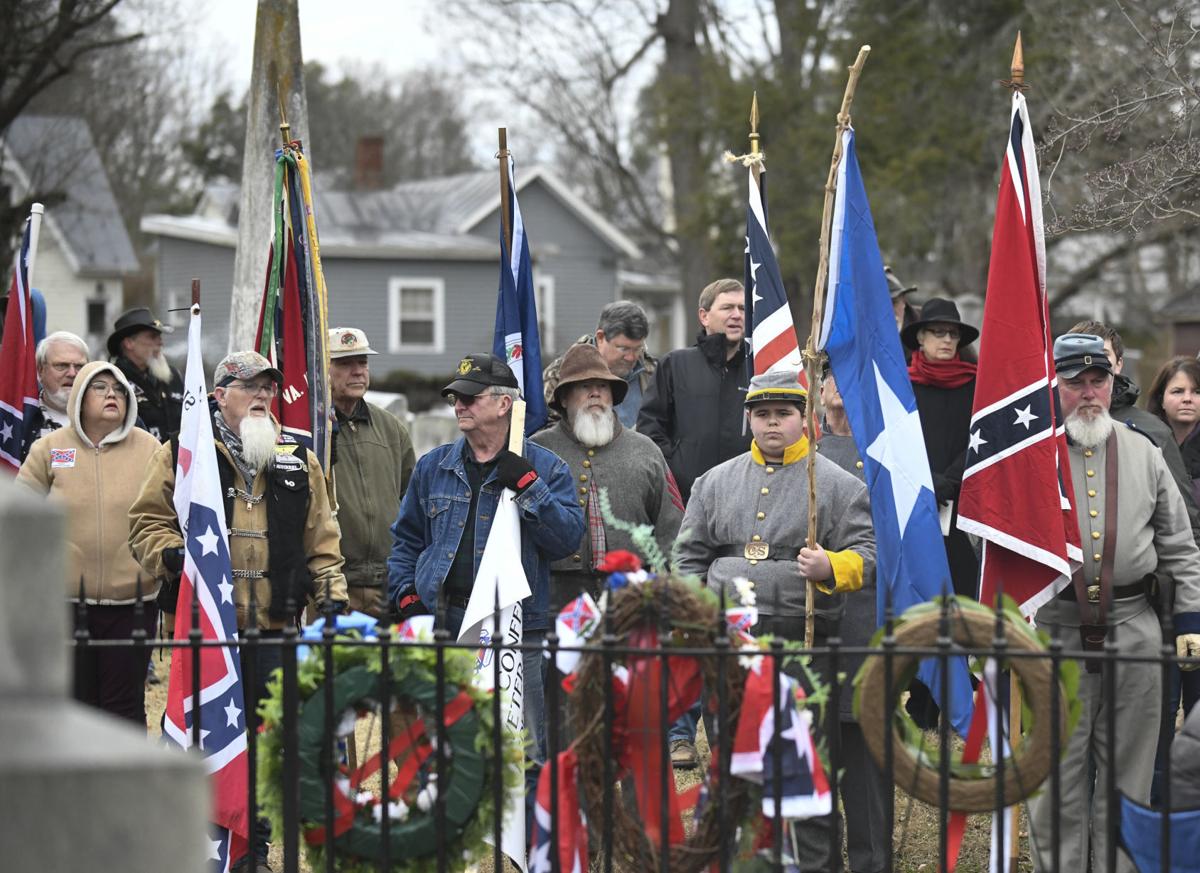 Various Confederate flags fly at Stonewall Jackson Cemetery in Lexington as people remember the Civil War general during a ceremony earlier this year.

LEXINGTON — Ongoing efforts within the General Assembly to bring an end to the state’s Lee-Jackson Day haven’t deterred some in Lexington from proclaiming their continued observation of the increasingly controversial holiday.

“I think Stonewall Jackson and Robert E. Lee are some of the greatest men to have ever lived,” Carson Via said while mounted on a horse named Cowboy. “Great men, and we’re all getting washed away.”

Via, who was dressed in a Civil War cavalry uniform, was among the more than 100 people Saturday who took part in the annual celebration of Lee-Jackson Day in Lexington.

The event is organized by the Lexington-based Stonewall Brigade, or Camp 1296 of the Sons of Confederate Veterans.

The celebrations began Friday — the day of the holiday itself — but continued Saturday morning and afternoon.

Saturday’s events began with a ceremony at the Stonewall Jackson Memorial Cemetery, where about a dozen wreaths were placed at the feet of the monument honoring the Confederate general.

Participants then formed a parade and primarily marched on Main Street, flanked by spectators and passersby, several of whom held up smartphones to either record or take pictures of the event.

Early on, the parade passed under two banners: One for Martin Luther King Jr. Day and the other for Lee-Jackson Day.

Accompanied by police vehicles, nearly all participants carried a Confederate battle flag, with some wearing jackets displaying the flag on their backs.

Those in the parade also chanted Civil War era songs, which included the Confederate version of “Battle Cry of Freedom.”

Observed on the Friday before Martin Luther King Jr. Day, Lee-Jackson Day is a Virginia holiday that was created more than a century ago to honor the two Confederate commanders. Many localities in the commonwealth, however, do not recognize the holiday.

The holiday, along with the calls to bring down Confederate monuments, fit into a greater effort in recent years to reexamine Confederate relics that activists and scholars argue keep alive some of the oppressive ideals that the war sought to end.

Democrats in both chambers of the Virginia General Assembly have introduced bills to repeal Lee-Jackson Day and replace it with a holiday for Election Day in November.

S B 601, by Sen. Louise Lucas, D-Portsmouth, was reported from the Senate General Laws and Technology Committee on Wednesday and had its first reading on Friday in the full Senate. The House version, HB 108, has been referred to the Rules Committee and hasn’t yet come up for a vote.

Gov. Ralph Northam, a Democrat, supported the idea in his State of the Commonwealth speech earlier this month, as a way to make to make it easier to vote in Virginia.

“We need to make Election Day a holiday. We can do it by ending the Lee-Jackson holiday that Virginia holds. ... It commemorates a lost cause. It’s time to move on,” Northam said.

However, some of those who were in Lexington on Friday and Saturday don’t support the governor’s stance.

Via, who’s from Waynesboro, said he has absolutely nothing against African Americans, adding that he is friends with many. He said he views things such as Confederate monuments as a preservation of Southern history.

John Ocheltree, a member of the Stonewall Brigade, said many of those participating Saturday had ancestors who fought on both sides of the Civil War. “But as a re-enactor, somebody that appreciates this kind of thing, we’re out here to promote specifically generals Lee and Jackson,” Ocheltree said. “We’re here to honor Civil War soldiers.”

One of the last events on Saturday occurred at the historic Hampton Inn Col Alto, where there was discussion on the effort to bring down Confederate monuments.

The speakers, including featured speaker and author Philip Leigh, took issue with the campaign against the monuments.

“As you know, we’re in the middle of a fight,” said Fred Chiesa, who delivered the welcoming remarks at the Hampton Inn. “They’re not just trying to rewrite state law, they’re trying to rewrite the history of Virginia itself.”

Leigh paired his talk with a slide presentation showing, among other things, Confederate monuments such as the Silent Sam statue that was brought down by activists at the University of North Carolina at Chapel Hill.

Heather Wells, a Rockbridge County resident, went to Saturday’s parade with her children.

“I think it’s good to support history,” she said. “There’s two sides to each issue, and I’m teaching my kids that the biggest thing is to research and learn from history. Don’t just believe what other people say. That’s why we went.”

Participants in the annual Lee-Jackson Day parade march under a banner advertising a parade in remembrance of Dr. Martin Luther King.

Surrounded by flags of the Confederacy, Braxton Spivey portrays Gen. Robert E. Lee as he leads the Richmond-based group Virginia Flaggers during the Lee-Jackson Day parade in Lexington on Saturday.

Various Confederate flags fly at Stonewall Jackson Cemetery in Lexington as people remember the Civil War general during a ceremony earlier this year.